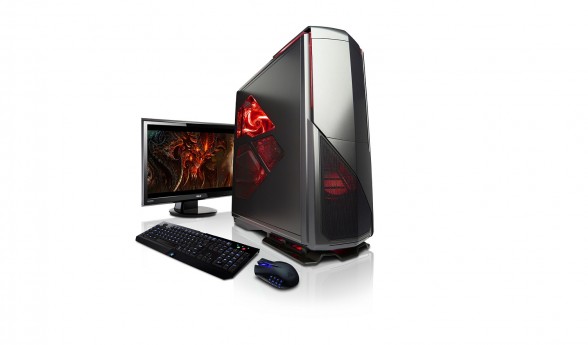 Cutting Edge Performance and Style Blows Away the Competition

CyberPower Inc., a global manufacturer of custom gaming computers, today announced the Zeus Storm series – a powerful trio of desktop gaming computers equipped with cutting edge processors from Intel and AMD, godly NVIDIA and AMD graphics, and a host of performance peripherals that will prompt your opponents to batten down the hatches and take cover.

A “storm” is coming and CyberPowerPC does not want gamers to be left out in the cold. The Zeus Storm series includes three models that stand ready to battle. Customers can select from the Zeus Storm 1000 with 8-Core AMDZambeziprocessors, which allow you to immerse yourself in the most advanced 3D games and achieve extreme mega-tasking.

High definition gaming will be epic because CyberPowerPC outfits the Zeus Storm with leading edge graphics from NVIDIA’s GeForce GTX 600 series or AMD Radeon 7000 series GPUs. Whatever GPU selected, CyberPowerPC customers will be assured of gaming performance as well as great versatility and speed in video transcoding and other digital content creation applications. The Zeus Storm series can also harness the power of multiple video cards with your choice of AMD CrossfireX or NVIDIA SLI giving you the ability to span your game across multiple screens for an ultra-high resolution extreme detailed gaming experience.

The Zeus Storm is enclosed in the new NZXT Phantom 820 gaming chassis. The full tower serves as the perfect suit of armor to provide maximum cooling and good looks with its sleek design and advanced hue lighting system that allows users to quickly change internal colors on the fly. But the Storm’s chassis is no gimmick. Cooling your Zeus Storm is a breeze with support for up to eight 120mm case fans. In addition, Zeus Storm CPUs are liquid cooled with CyberPowerPC’s Advanced Hydro liquid cooling 360mm kit that delivers maximum heat dissipation and minimal noise.

All CyberPowerPC gaming systems can be customized with a number of performance gaming hardware and components such as Solid State Drives, Blu-Ray drives, low-latency high capacity memory modules from top tier brands, gaming peripherals, business and productivity software, including the option to pre-order the all new Windows 8 Operating System. Users can have their Zeus Storm gaming PCs Windows 8 tested and loaded for a seamless gaming and multimedia experience out of the box.

Additionally, every system is meticulously built with precise cable routing to ensure optimal airflow and a clean aesthetic appearance. All CyberPowerPC desktop gaming systems include an industry-best 3-year limited warranty.

For more information about the Zeus Storm, please check out the CyberPowerPC website here.