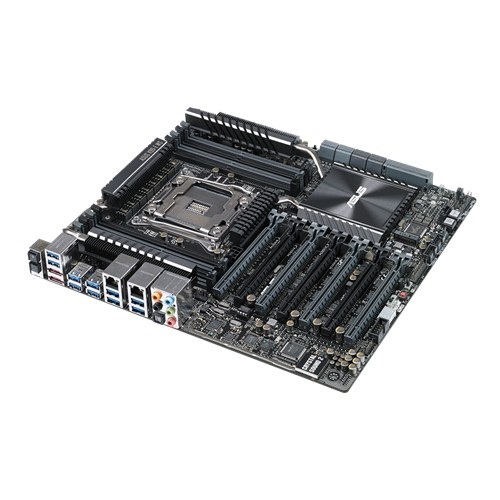 Like its predecessor, the ASUS P9X79-E WS, the ASUS X99-E WS is a colossal CEB form-factor motherboard bars none when it comes to features. Sporting the new LGA 2011-3 socket, the ASUS X99-E WS will accept all the latest Haswell-E Core i7 CPUs and even some of its Haswell-E Xeon based cousins such as the Intel Xeon E5. Included is also support for up to 8x DDR4 DIMMs capable of handling a maximum of 64GB of RAM in quad channel mode, 7x PCI-E 3.0/2.0 x16 slots making the board ready for both quad SLI/Crossfire configurations, 12K hour solid capacitors, dual gigabit LAN, and an 8-channel audio subsystem as well.

As expected, there’s also an impressive array of storage and expansion options available. Aside from the typical 8x internal SATA 6Gb/s ports, there’s also a next generation SATA Express port and a M.2 x4 slot as well. Additionally, the rear I/O panel is home to 10x USB 3.0 ports and 2x eSATA ports. Add in additional internal USB 2.0/3.0 headers and we can increase the USB 2.0/3.0 port count to a total of 18 is the user so desires.