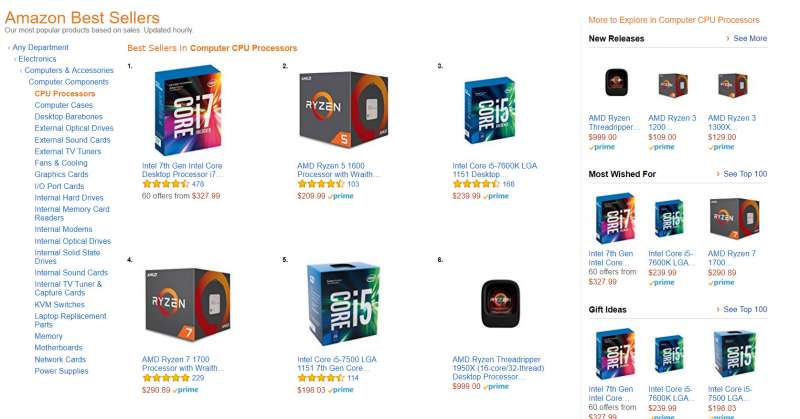 Back in February when AMD launched their Ryzen 7 series CPUs, they were able to easily snag several of the top spots on the Amazon Best Sellers list for CPUs. Today, several of the Ryzen CPUs still maintain several top spots in Amazon’s rankings, although Intel has reclaimed the #1 spot with their Core i7-7700K.

However, what’s interesting about the best sellers list currently is that the 16-core/32-thread [easyazon_link identifier=”B074CBH3R4″ locale=”US” tag=”cupcre06-20″]AMD Ryzen Threadripper 1950X[/easyazon_link] was able to claim the #6 spot on the list, which isn’t something you see everyday. While it’s easy for a $200 mainstream CPU to break into the top, it’s not all that common to find a prosumer $1,000 CPU outselling stuff like the Core i7 7700. For reference, Intel’s Core i9-7900X is sitting in the #34 spot.

Overall the recent launch of the AMD Ryzen Threadripper has been an exciting one and it’s nice to see that all the excitement is translating into sales numbers as well. If this keeps up and other retailers are seeing similar sales figures, Threadripper could pose a very serious threat to Intel’s Core-X series processor lineup.