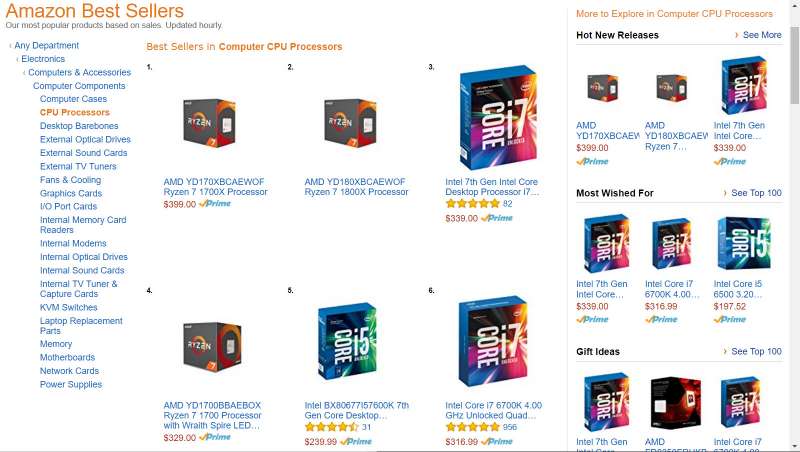 For the first time in a very, very long time, Intel has been ousted from Amazon’s Best Seller list for CPUs with AMD now taking three of the top four spots on the list. The most popular AMD Ryzen 7 CPU is the Ryzen 7 1700X, followed by the Ryzen 7 1800X. The only Intel holdout at this moment is the Intel Core i7-7700K which is still clinging on to a top three spot although the Ryzen 7 1700 isn’t far behind at the number four spot.

Revealed earlier this morning, AMD’s upcoming Ryzen 7 processors have been shown to be very competitive against Intel’s current offerings across the board in both performance and price. The flagship AMD Ryzen 7 1800X for example features the same level of performance as Intel’s Core i7-6900 yet costs just half the price. At the same rate, the AMD Ryzen 7 1700 has been shown to be able to significantly outperform the pricier Intel Core i7-7700K in multi-threaded applications. Pre-orders for the AMD Ryzen 7 1800X, Ryzen 7 1700X, and Ryzen 7 1700 launched today with the CPUs expected to begin shipping March 2.

Other retailers are likely seeing the same level of excitement for AMD Ryzen, which if it’s something AMD could keep up will spell big trouble for Intel who has enjoyed a virtual monopoly on high performance, high margin enthusiast class CPUs for well over the past five years. As a result, this may lead to massive decreases in revenue for Intel in the coming quarter as they now face the tough decision of accepting lower margins on their high end parts or handing AMD the victory until the next generation of CPUs begin rolling out.