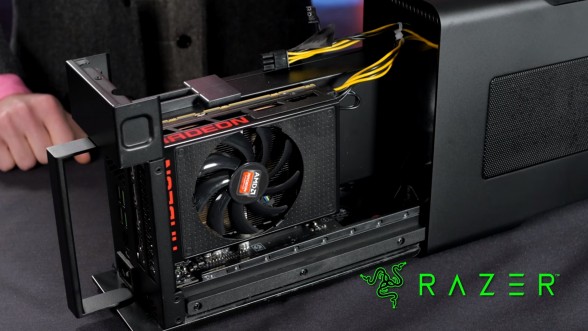 In an incredible move, AMD has announced its support for External GPU via Thunderbolt 3 graphic docks.

External graphics docks aim to bring huge boosts in gaming performance to power-sipping ultrabooks and notebooks. Leveraging a fully-fledged desktop graphics card docked in a thunderbolt enclosure, users can easily convert their workstations into a gaming rig at the plug of a cable. This is thanks to both Intel giving the nod to external graphics with the release of Thunderbolt 3 and AMD’s efforts in developing the necessary firmware and drivers.

The advantages are obvious. External graphics card offers the best flexibility for work and play. Once refined, mobile users will no longer be forced to choose between owning a desktop and laptop combo or lug around a heavy desktop replacement. In addition, users can easily upgrade the graphics card in the dock, saving cost in the long run.

Unfortunately, the Razer Core still has yet to ship, and Razer has yet to state what kind of performance we can expect. The main concern is over the bandwidth of the interface. While Thunderbolt 3 has a max throughput of 40Gbps (around 5GB/s), it still can’t compete with PCIe 3.0 x16 which has a max throughput of around 126Gbps (15.75GB/s). With that said, even with today’s memory-hungry games, it’s very unlikely that the GPU is fully saturating the PCIe lanes. A concern with potentially more impact is over the CPU/GPU pairing and whether or not an Intel ULV CPU will bottleneck a high-end GPU. It remains to be seen what level of bottlenecking the GPU will experience, if any at all.

Switchable graphics is not something new. It’s been around in notebooks for years. In fact, even the external GPU idea has been hovering around for a while. Take Alienware’s Graphics Amplifier for example. It lets compatible Alienware 13, 15, or 17 laptops use a desktop graphics card over a proprietary PCIe connection.

What makes AMD’s XConnect and the Razer Core special is the transfer protocol. Instead of relying on PCIe and proprietary connectors, XConnect works over Thunderbolt 3. This means that graphics docks in the future will not be limited to only the device of the same brand, but lets users do the mix and match. XConnect also makes the graphics dock hot-pluggable so the host machine doesn’t crash when it’s disconnected unexpectedly.

Although that’s the hope of the future, XConnect in its current stage requires some specific components. Only select AMD graphics cards are certified to work with it.

Still, this is exciting news for gamers. External graphics has come a long way, materializing from being a mere dream to standing in the spotlight.