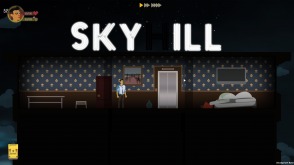 At E3 this year, I had a chance to check out several indie developers who were developing some pretty promising new games. One of the studios I checked out was Mandragora Studio who’s currently developing the Steam Greenlight game, Skyhill. As most of you probably have never heard of Skyhill, let’s first answer the question “What is Skyhill?”

Aside from the game name, “Skyhill” is actually a luxury hotel in the game in which you, as the game’s protagonist, have recently rented a penthouse in. Unfortunately, something happens – something evil, something inexplicable. The building then begins filling up with monsters and mutants and the only way out is the main doors in the ground floor – a mere hundred stories below. You need to fight your way through the hotel, defeating unknown horrors while collecting gear and materials to help craft better weapons – all while fighting one of your most powerful foes; the need for food and water.

As you may imagine, Skyhill is a simple rogue-like survival game with clever mechanics for crafting and collecting, a deep questing system and randomly generated levels — it offers solid fun with near endless replay.

For me, Skyhill looked quite cool and took me by surprise when I initially started watching the gameplay. It looks very easy at first, but once you hit the 30th floor and Perry Jason (your in-game character) starts losing energy from hunger you have to make the difficult decisions whether to press forward or try to retreat to the VIP suite, hoping you can recharge enough to continue the journey to salvation.  No save points. No leveling up to the point that you walk through your opponents.  Just you and your wits and praying it’s enough for the next flight of stairs.

Skyhill will support PC, Mac and Linux OSes when it gets released on October 6, 2015. Pricing on Skyhill is expected to be $14.99.