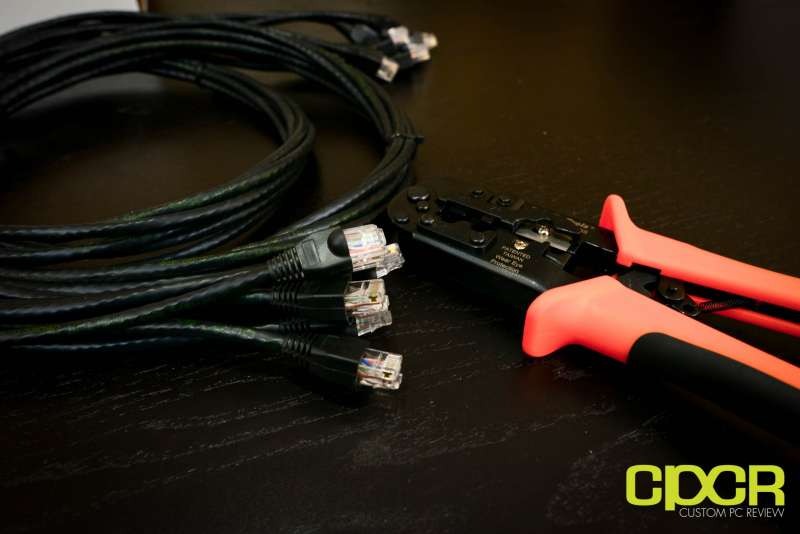 Why Should You Make Ethernet Cables?

To solve this problem, the easiest way is to simply build your own network cables. This way the cables are customized to the size needed. As an additional bonus, those who plan to make a lot of Ethernet cables will actually find that it’s much more cost effective to buy in bulk and make your own cables rather than purchasing pre-made cables. 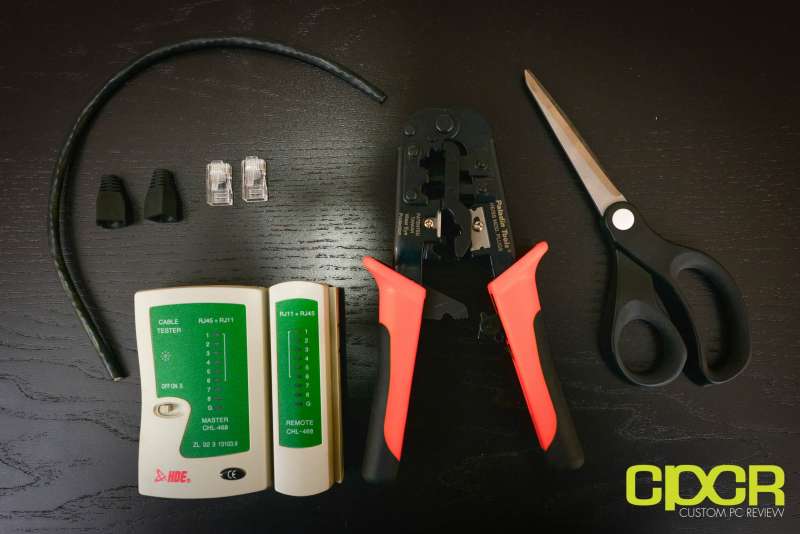 1. Ethernet Cable – For this tutorial, we’ll be using Cable Matters In-Wall Rated Cat6 however, Cat5e and Cat6 can be used for Gigabit speeds as well. This tutorial also works for older network cables and newer ones, but currently the best value to performance is Cat6. As there are several types of Cat6, ensure that the Cat6 you’re planning to purchase is using 100% copper and not some lesser mixture such as copper clad aluminum.

2. RJ-45 Ethernet Plug – These are important as these connect the cables to the network interface cards. For this tutorial, we’ll be using C&E Cat 6, Cat5e Crimp Connectors.

4. Racheting Crimp Tool – For this tutorial, we’ll be using the Paladin Tools network crimping tool. The tool has racheting functionality which will provide consistent crimping.

6. Scissors – Needed for cutting wires. Optional if you have a different cutting tool. 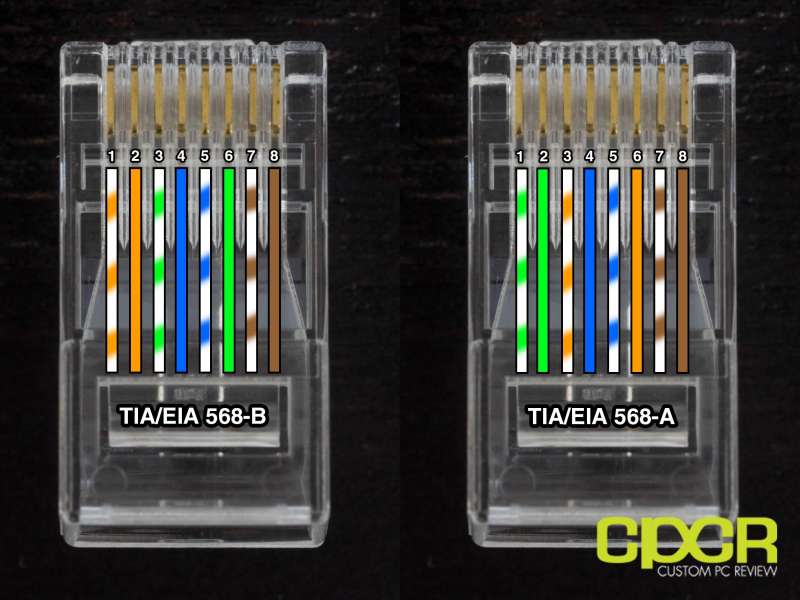 There are two main wire arrangements for Ethernet cables.

Standard Patch Cable – Standard patch cables are the most common cables we deal with on a daily basis. These are cables that primarily connect computers to switches, routers, and modems. While technically any combination of wiring can be used for a standard patch cable (as long as both ends of the cable is the same), the generally accepted method of wiring Ethernet cables is by using the TIA/EIA 568-B wiring standard for both ends of the cable. 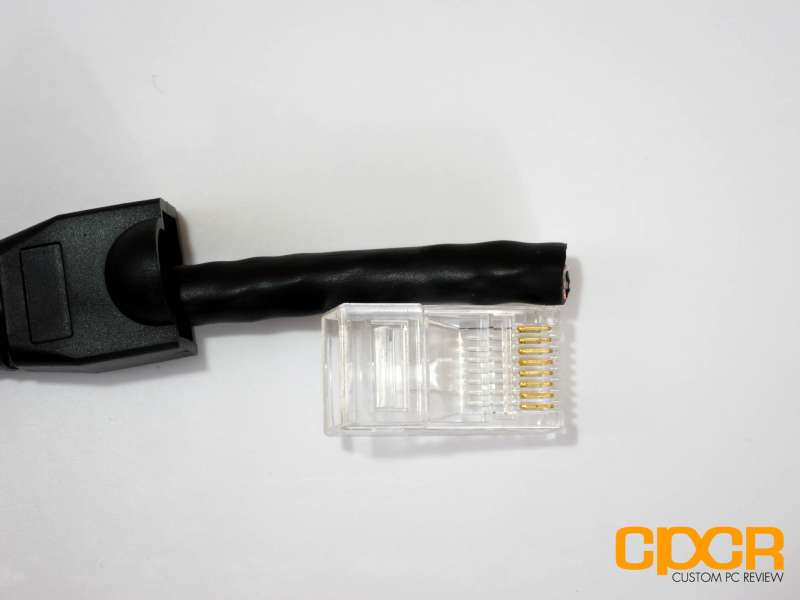 Use one of the RJ-45 Ehternet Plugs to figure out how much of the cable sheath needs to be removed. This is typically about 1-inch. 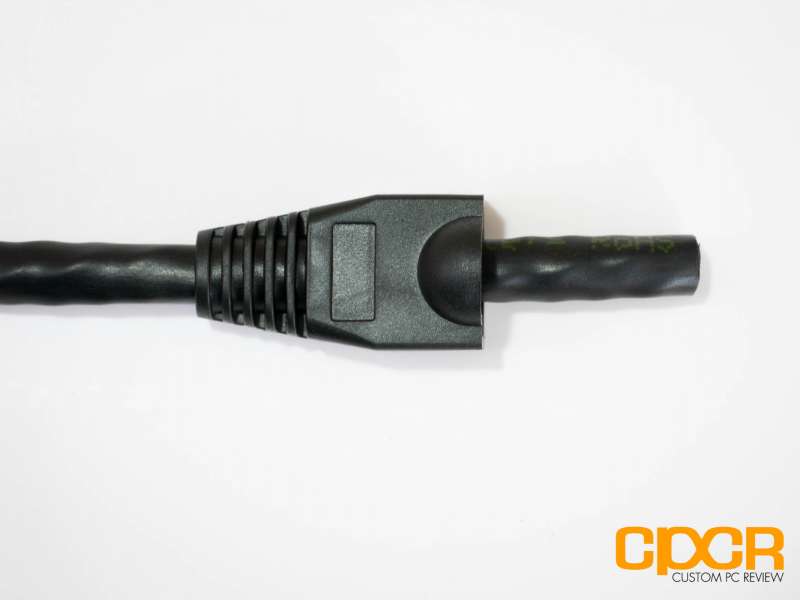 If you opted for strain relief boots, go ahead and install them now. 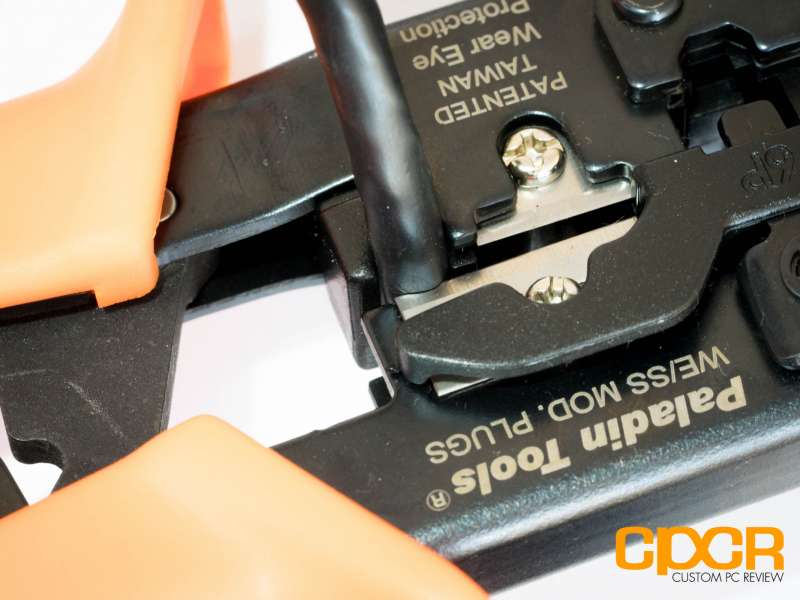 Strip the sheath in order to reveal the wires inside. The crimp tool should include a tool to strip the sheath, but if this isn’t available, a knife or scissor can be used as well. 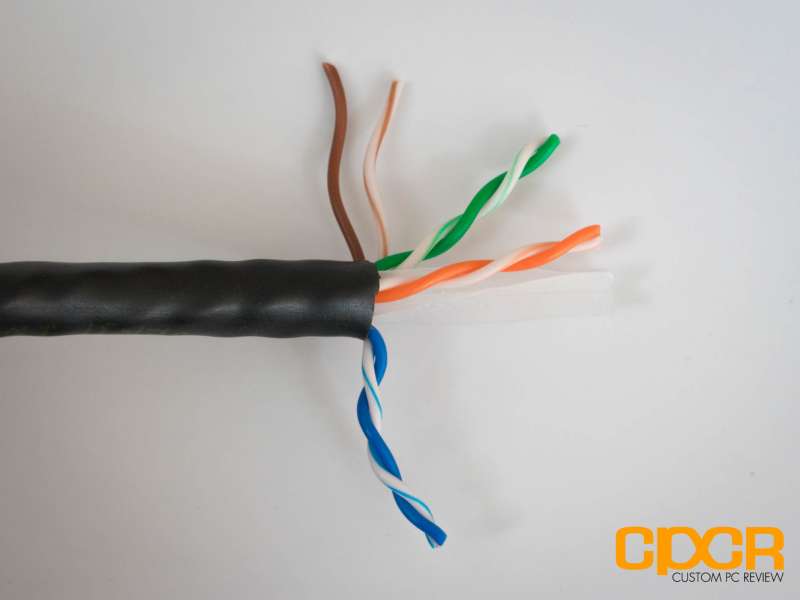 Once the sheath is removed, the wires inside are now exposed. 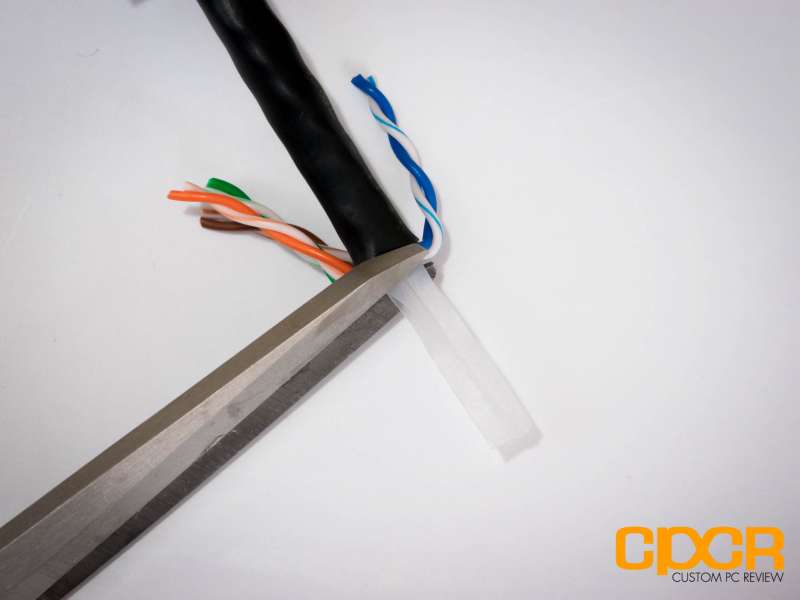 Those making cables with newer cables such as Cat6 will find a plastic core in the middle which helps maintain twisting in order to reduce crosstalk. Go ahead and trim the plastic core as low as possible.

Arrange the wires based on the wiring diagram. Since we’re building a normal patch cable, use the TIA/EIA 568-B wiring standard. 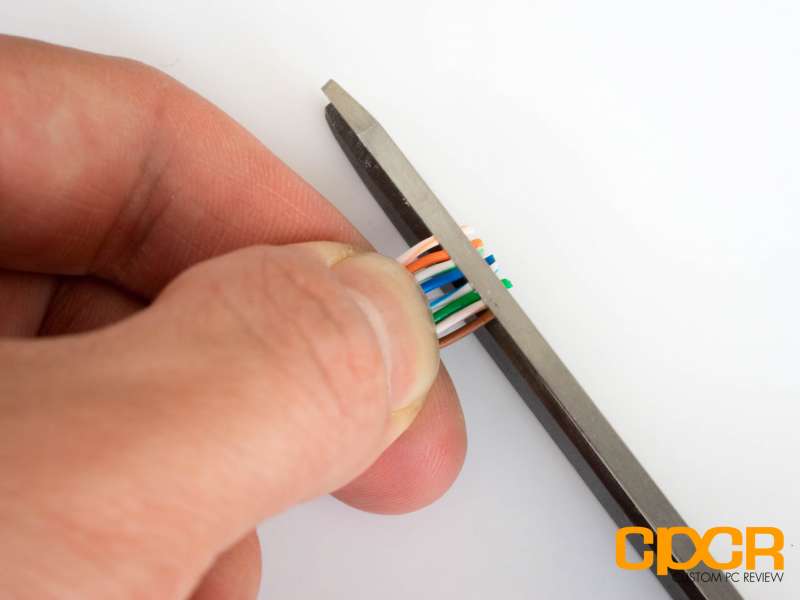 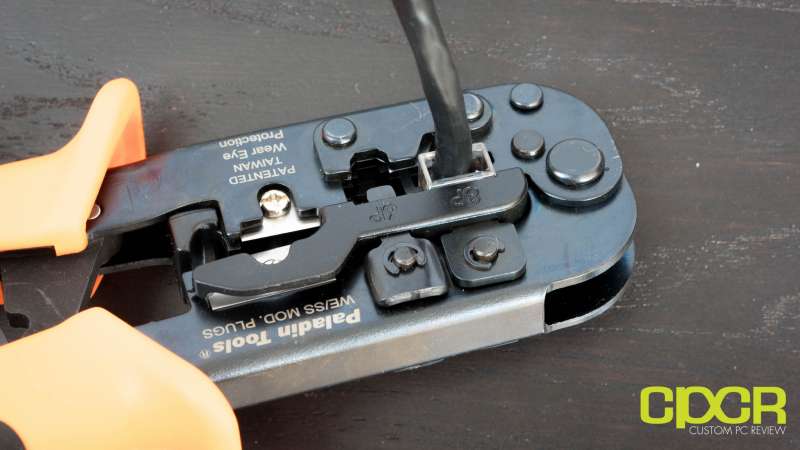 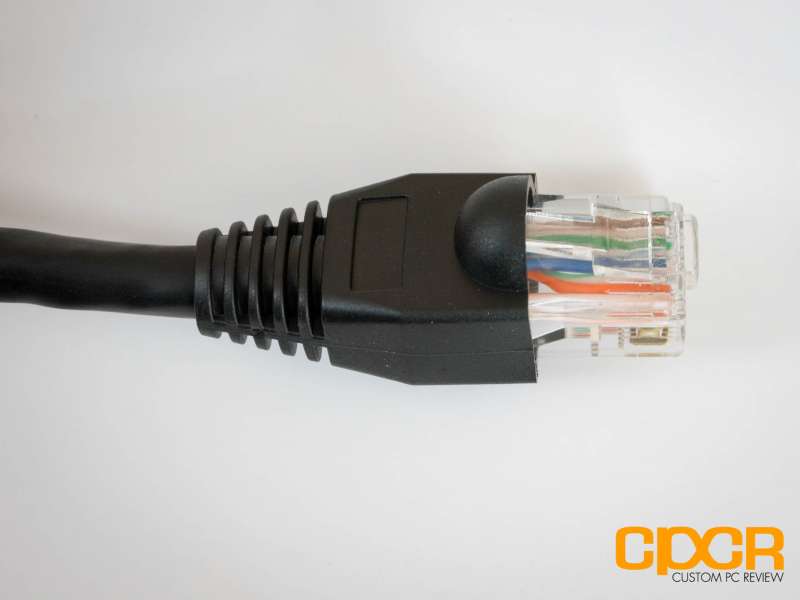 Once the Ethernet plug is crimped, repeat Steps 1-7 for the other end of the cable. 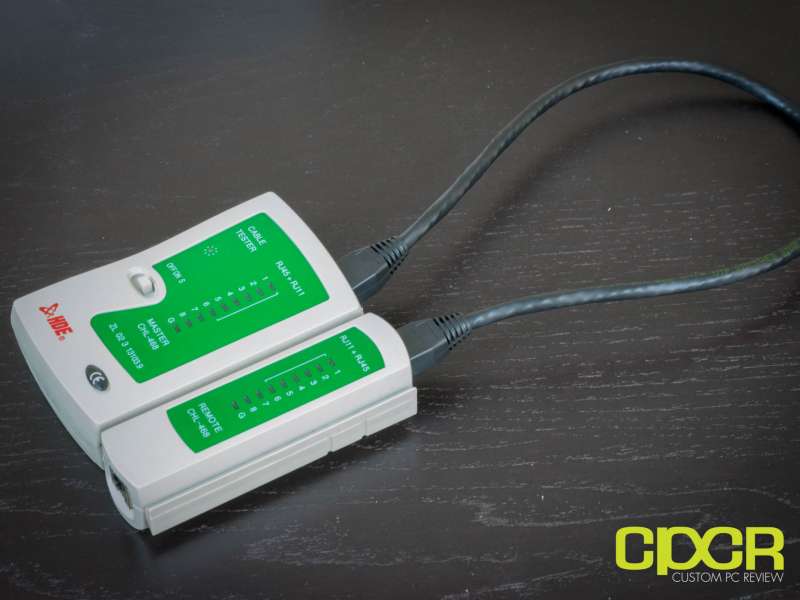 Optionally, the recently made cables can be tested with a cable tester. For larger cable deployments, this is very helpful as nothing is worse than trying to track down which cables aren’t working after spending hours running several hundreds of feet of cable.