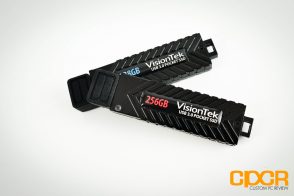 Aside from the insanely great performance, shock resistance, and low power consumption, one benefit of SSDs is the ability for them to be extremely compact. As a SSD only requires silicon rather than spinning disks, SSD form factor is really only dictated by how a company chooses to arrange the chips onboard.

As such, we’re starting to see quite a few external SSDs take advantage of this form factor flexibility. One such product is the VisionTek USB 3.0 Pocket SSD which crams a full SSD into a form factor just slightly bigger than your average flash drive.

A Closer Look at the VisionTek USB 3.0 Pocket SSD 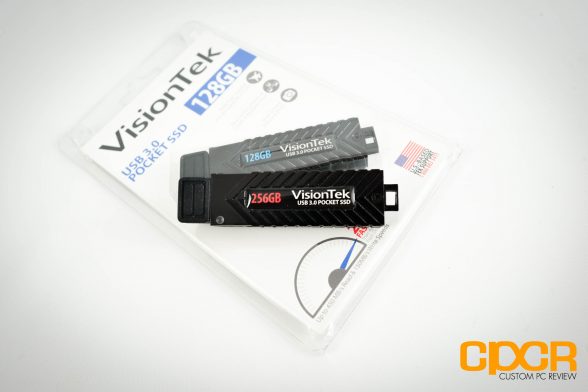 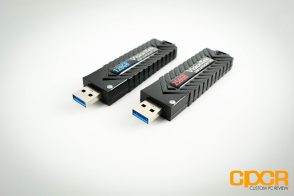 Here’s a look at the VisionTek USB 3.0 Pocket SSD. It’s a pretty good looking product and feels very physically durable thanks to its outer metal casing. Protecting the USB connector is a small rubber cap which is a pretty decent quality cap, but as we all know, small rubber caps can easily get lost.

The design of the VisionTek USB 3.0 Pocket SSD is actually one we’re pretty familiar with as Avant showed it off several years ago. Since Avant manufactures SSDs for a variety of vendors, I’d bet that that’s where VisionTek sourced their drive. 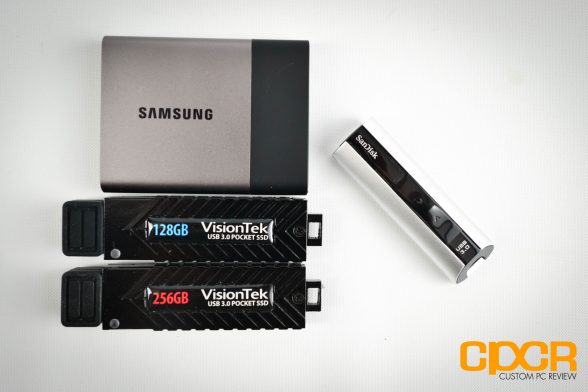 Here’s a size comparison between the VisionTek USB 3.0 Pocket SSD, the Samsung PSSD T3, and the SanDisk Extreme Pro USB 3.0 flash drive. While the VisionTek USB 3.0 Pocket SSD isn’t as small as the SanDisk Extreme Pro, it’s still slightly smaller than Samsung’s PSSD T3 and doesn’t require an additional cable to connect to a PC. 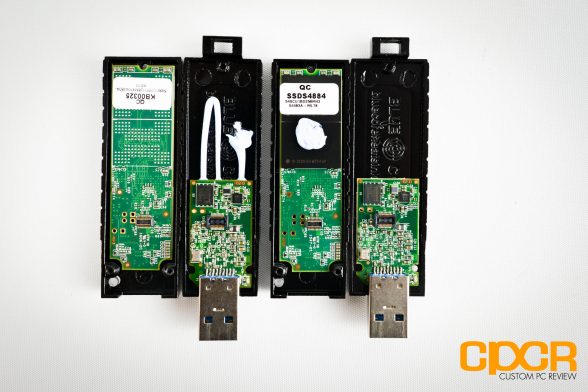 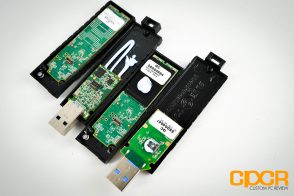 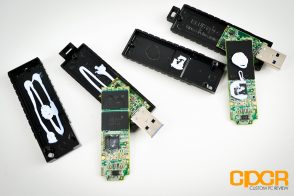 Opening the VisionTek USB 3.0 Portable SSD was as simple as removing 3 screws. Personally I feel this is a much more durable option compared to clips used in most other external drive solutions.

Internally, VisionTek split the drive into two PCBs, one with the actual SSD hardware and the other carrying the USB bridge chip and the USB connector. Connecting the two PCBs is a proprietary connector.

The bridge board carries an ASMedia ASM 1153E SATA to USB 3.0 bridge which is ASMedia’s third generation bridge chip supporting USB 3.0 and the UASP protocol.

One thing I did notice is that VisionTek is using some sort of thermal glue to help dissipate heat, but it’s poorly applied. In this instance I believe a thermal pad would’ve been a much better choice. 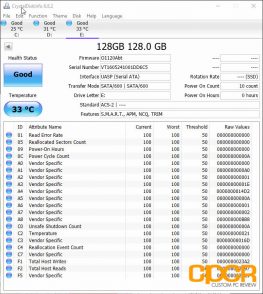 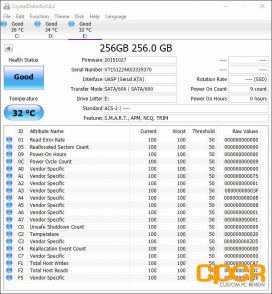 Crystal Disk Benchmark results mirror what we saw from ATTO Disk Benchmark. Since VisionTek is utilizing the Silicon Motion 2246XT controller, there’s no performance difference between random and sequential datasets. Again, what’s interesting is that the 128GB version is able to reach 210MB/s sequential writes, which is 50MB/s over its rated performance. 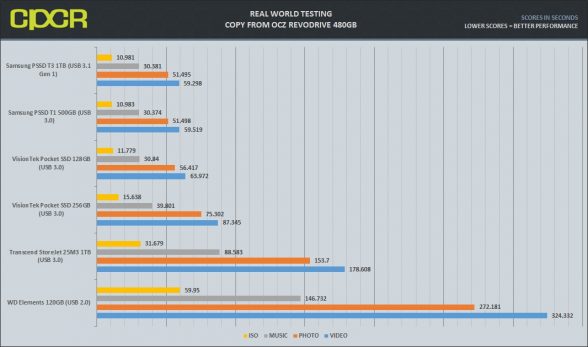 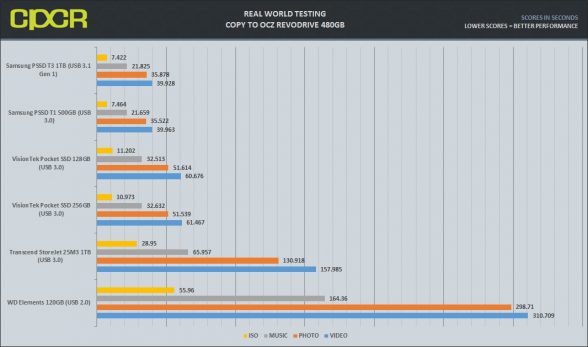 In our real world testing, the VisionTek USB 3.0 Pocket SSD performed very well, significantly outperforming the external hard drives tested. Against the Samsung PSSD T1 and the Samsung PSSD T3 however, the VisionTek USB 3.0 Portable SSD is still slightly slower. The 128GB capacity with its higher write speed was also able to consistently outperform the 256GB capacity drive in our copy from tests. 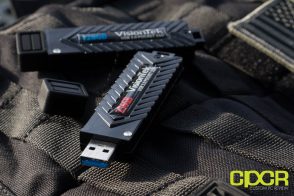 So for full disclosure’s sake, this review has been a long time coming because my original 128GB Pocket SSD sample died on me while testing. VisionTek did end up sending a new unit out which performed flawlessly. While I can’t be 100% sure why the original drive died, I did notice when I opened the drive that it used some NAND marked “10-2118-01-MTX-1AP” which is something I’ve never seen before. As VisionTek doesn’t manufacture their own NAND, they have to source NAND from whatever’s available and unfortunately this sometimes isn’t exactly top tier stuff. Fortunately, the replacement 128GB Pocket SSD I received contained quality SanDisk branded NAND, but this does mean that everything I write here may be obsolete in the next few months if VisionTek decides to use a different batch of NAND. Keep that in mind.

With that out of the way, performance on the VisionTek Pocket SSD is fairly good, but does lack a bit compared to competing external SSD offerings. It’s still significantly faster than any of your typical USB hard drives on the market, including the premium USB 3.0 solutions out there. In our file transfer tests, the Pocket SSD spent most of its time right behind the Samsung PSSD T3 which is the fastest USB 3.0/3.1 external SSD we’ve tested. This is fantastic especially for content creators who constantly need to move large video or audio files around on external drives.

While performance is a great selling point, I think what really differentiates the VisionTek USB 3.0 Pocket SSD is how small the device is despite having a full size SSD crammed inside. This is something that even SSD giants like Samsung, SanDisk and Crucial haven’t been able to achieve which is a huge accomplishment for VisionTek.