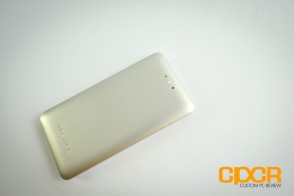 With the increase of users with mobile devices such as smartphones and tablets, wireless storage devices have become quite popular to not only help provide additional external storage to many mobile devices, but also to bridge the gap between PCs and these devices as well.

Currently on the market, we typically see two classes of these wireless storage products – one which includes some sort of integrated storage (usually a hard drive) while the second includes a slot for some sort of external storage such as a SD card or micro SD card.

Toshiba’s latest wireless storage device, the Canvio AeroMobile Wireless SSD, is a bit different as it mates internal storage (in the form of a high performance SSD) along with a SD card slot allowing users to easily access or backup files from the SD card directly onto internal storage. 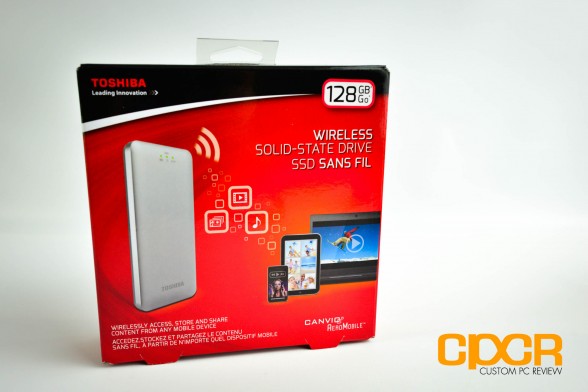 Here’s a look at the packaging for the Toshiba 128GB Canvio AeroMobile Wireless SSD. 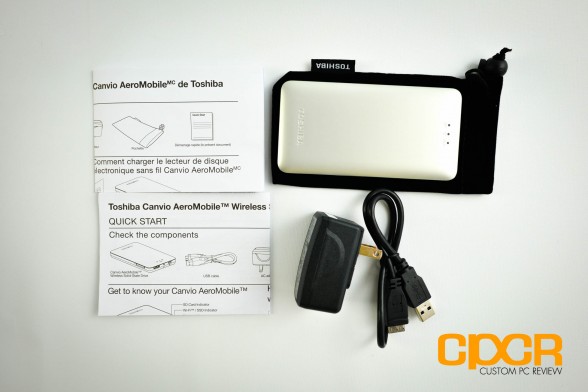 Included in the packaging, we get some documentation, a USB 3.0 cable, an AC power to USB transformer, the 128GB Canvio AeroMobile Wireless SSD, and a carrying case. 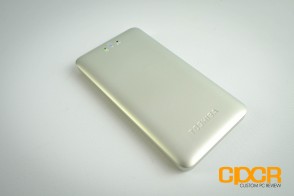 Here’s a look at the Toshiba Canvio AeroMobile Wireless SSD. The unit is approximately 5″ long, 2.5″ wide, 0.5″ thick, and weighs in at around 120G. There’s 3 LEDs up top which indicate battery life, WiFi status, and SD card status.

Contrary to its appearance, the unit is constructed entirely of plastic, which unfortunately is easily susceptible to scratches and scuffs. However, this shouldn’t be too much of a problem for functionality as the Canvio AeroMobile uses a SSD, so it’ll be resistant to shocks and vibrations. 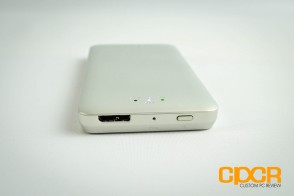 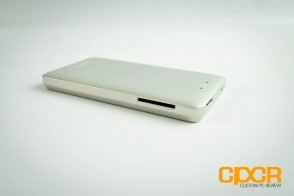 At the front of the unit we get a single power button, a reset button, and a micro USB 3.0 port. On the right side of the device, we also get a slot for a SD card as well.

Unfortunately, we weren’t able to open the unit up as this would cause irreparable damage to the plastic casing.

Once the Toshiba Canvio AeroMobile Wireless SSD is powered up, devices such as PCs, tablets, smartphones, etc. can be connected to the unit. Once connected, users can either access the Canvio AeroMobile by its IP (10.10.10.254 in our case), or Toshiba offers apps for both iOS and Android users. Both the browser interface and the apps are fairly similar. 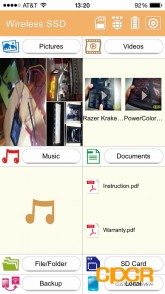 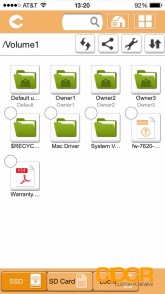 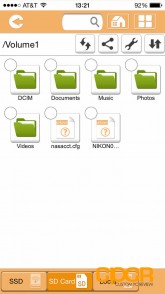 While the app isn’t the most polished of apps we’ve seen, it has enough basic functionality to automatically categorize photos, videos, documents, etc. on the wireless SSD. It’s also easy to browse files directly from the drive or SD card for those who know exactly where files are. 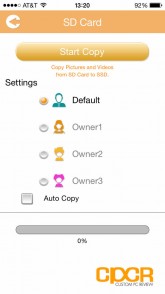 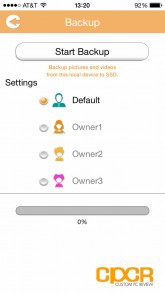 There’s also an automatic backup function which can backup files from SD cards or from the iOS device. Unfortunately, the backup process is very slow, tends to hang quite often and and took almost two hours for the process to complete on my iPhone 5. 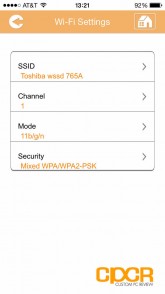 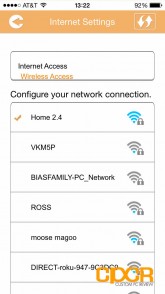 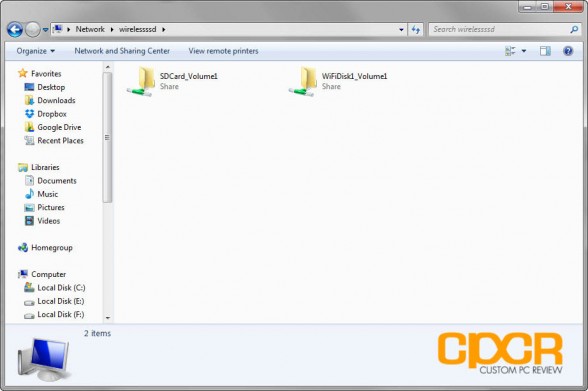 Special thanks to CyberPowerPC, Kingston, OCZ Technology and HSPC for sponsoring our test system! 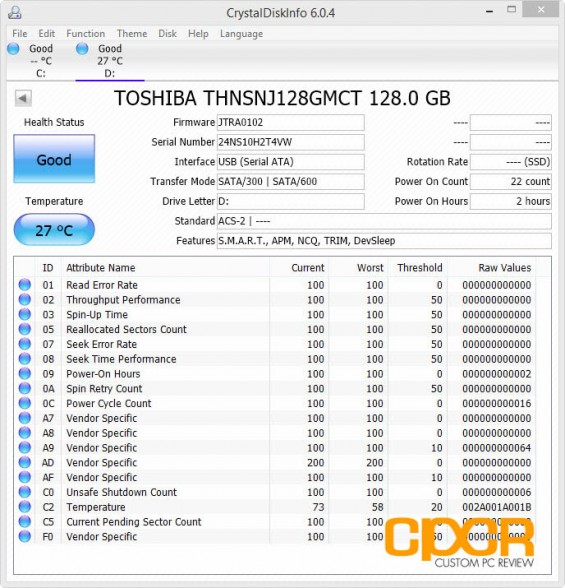 When connected to a PC, the Canvio AeroMobile can be used as DAS (Direct Attached Storage). DAS performance testing is conducted with Crystal Disk Mark with a sequential data set. 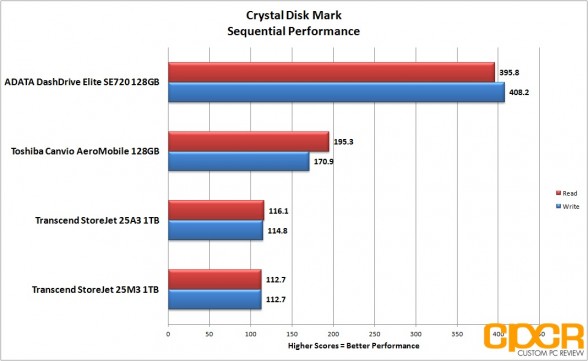 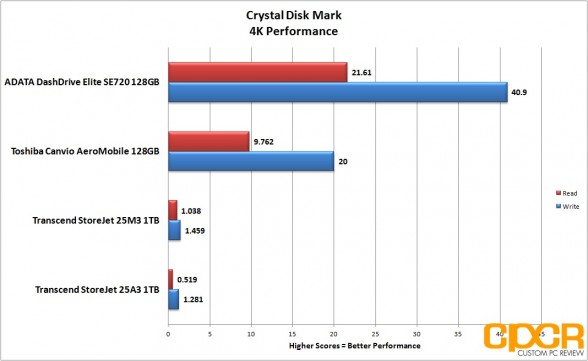 When directly attached to the PC via USB 3.0, the Toshiba Canvio AeroMobile is capable of up to 195MB/s reads and 171MB/s writes. This is decent performance however, it seems like the Canvio AeroMobile does not support UASP which is why it’s significantly slower than the ADATA DashDrive Elite SE720. 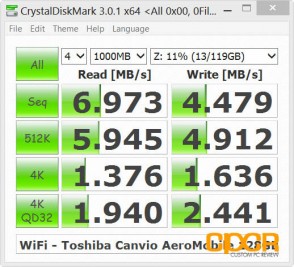 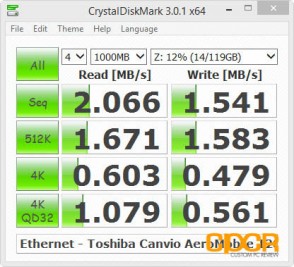 Looking at performance, bridged mode is actually quite good in comparison to other wireless storage devices we’ve tested in the past. From our testing, there doesn’t appear to be a significant impact on internet performance by using the Canvio AeroMobile as a bridge. 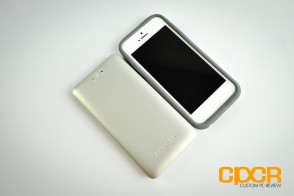 Alright, so after spending a couple weeks with the Canvio AeroMobile, let’s talk about how it fared.

As performance in direct attached storage (DAS) mode is much better than wireless mode, I generally found myself using the device more as external wired storage rather than wireless – probably because of the limitations of wireless performance more than anything. In testing with a wireless N capable laptop, we were only able to achieve ~7MB/s (~56Mbps) reads and ~5MBs (~40Mbps) writes in wireless mode while we had no problems pulling ~195MB/s reads and ~171MB/s writes in USB 3.0 wired mode. While wireless performance should be plenty for those looking to simply stream movies or pictures directly from the drive, transferring large amounts of data wirelessly to and from the drive will be quite slow.

Software on the Canvio AeroMobile is a bit rough on the edges, but it does everything you’d expect it to do. Browsing files on the drive was quite easy and getting the app to work with the drive wasn’t a problem as well. The only major problem I experienced with the app was the backup function which got stuck numerous times and took a painfully long time to complete. It did ultimately complete after a couple hours, but I’d imagine there must be a much more refined way to backup some photos and videos.

The Toshiba Canvio AeroMobile 128GB Wireless SSD can currently be found for ~$149.99 at various e-tailers which comes out to ~$1.17/GB. Given that most 120GB/128GB SSDs currently retail at around $0.50/GB, it’s a huge premium to pay for wireless functionality. Unfortunately, there aren’t any products on the market exactly like the Canvio AeroMobile so it doesn’t have any direct competitors just yet, but for those who don’t need the combination of wireless SSD and SD card reader, there are numerous of battery powered wireless storage devices on the market that serve similar functions to the Canvio AeroMobile such as the ADATA AE400, the SanDisk Connect, and the Corsair Voyager Air.

While it’s a is a bit expensive, a bit rough on the edges and could use a bit more performance as a SSD based product, the Toshiba Canvio AeroMobile 128GB Wireless SSD performs as advertised and is a great solution for those looking for portable, high performance wireless storage.