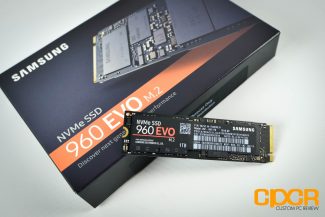 Last month, we reviewed the Samsung 960 PRO which is designed for performance enthusiasts and professionals. In our testing, it exceeded our expectations making it the fastest M.2 PCIe SSD we’ve ever tested to date. Unforutnately, the Samsung 960 EVO wasn’t available at the time however, Samsung was hopeful that early samples would be available soon.

Like previous Samsung EVO SSDs, the Samsung 960 EVO features TurboWrite technology which re-purposes a portion of the TLC NAND onboard into a SLC cache. With the Samsung 960 EVO, Samsung has improved on their technology which is now known as Intelligent TurboWrite. Rather than using a fixed cache size, Intelligent TurboWrite is now able to dynamically adjust the cache to make it larger or smaller depending on how much data is being written. For the 1TB model, the cache can be as large as 42GB.

Like the Samsung 960 PRO, the Samsung 960 EVO will support AES-256 and TCG Opal encryption methods out of the box. Unfortunately, eDrive (IEEE 1667) support is still under consideration at this time.

Warranty on the Samsung 960 EVO is rated at up to 3 years with endurance ranging from 100TB to 400TB depending on capacity. For typical workloads, this should be plenty of endurance to outlast the usable life of the drive, especially in the higher capacity models.

A Closer Look at the Samsung 960 EVO 1TB 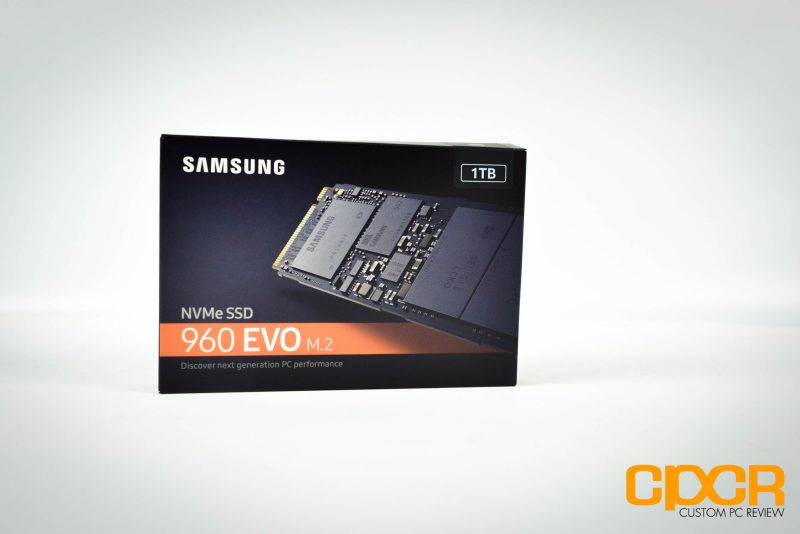 Here’s a look at the packaging for the Samsung 960 EVO 1TB. 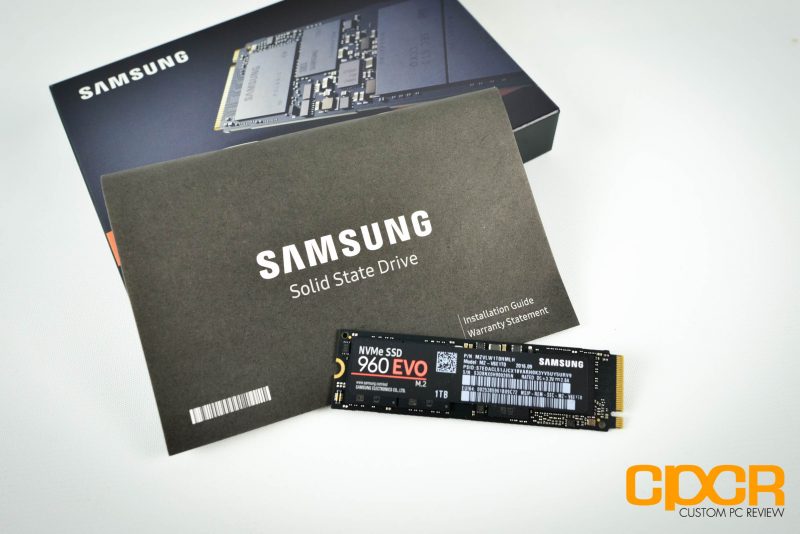 Included in the packaging is the Samsung 960 EVO and some documentation.

Here’s a look at the Samsung 960 EVO 1TB. It uses a typical design with 2 NAND packages, DRAM and controller. Around the back of the drive is Samsung’s new heatspreader label which is designed to help distribute and reduce heat. 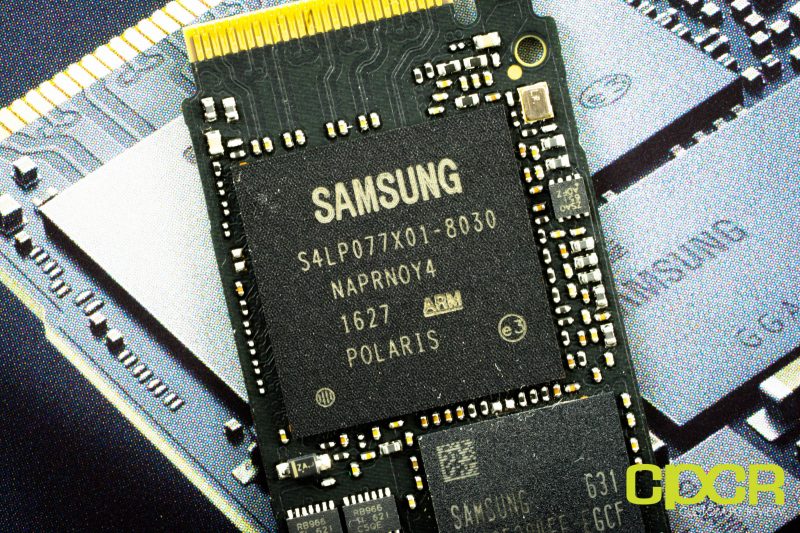 NAND onboard is the 256Gb Samsung 48-layer TLC 3D V-NAND. Samsung is able to cram 16 dies per package here making a total of 512GB per package. 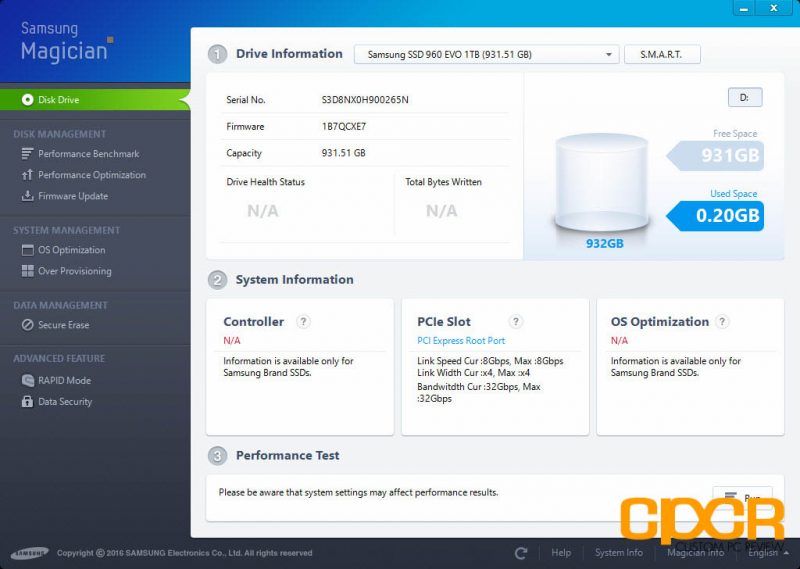 Here’s a look at a screenshot of Samsung Magician. Since the updated software still hasn’t been released yet, only a few details of the drive are available such as the firmware version. Today we’ll be reviewing the Samsung 960 EVO with firmware 1B7QCXE7.

AS SSD is a very commonly used benchmark used to measure SSD performance in sequential, 4K, 4K QD64 and latency. Tests are run using 100% incompressible data. AS SSD also outputs a final score at the conclusion of the test based off the overall performance of the drive.

Additionally, we also run AS SSD’s included compression benchmark which tests the drive using data of varying compressibility. Some SSDs such as SandForce based SSDs tend to perform significantly better when the data is compressible. 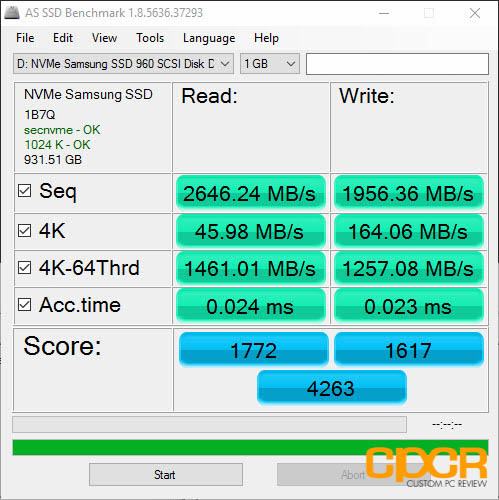 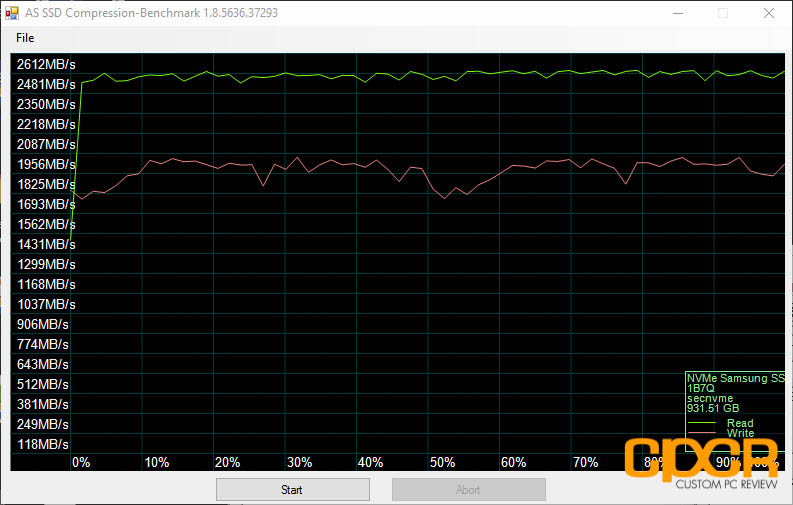 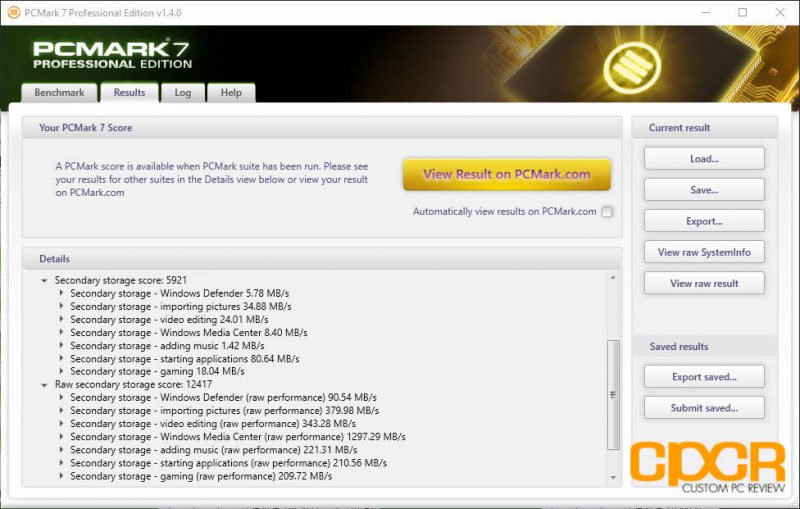 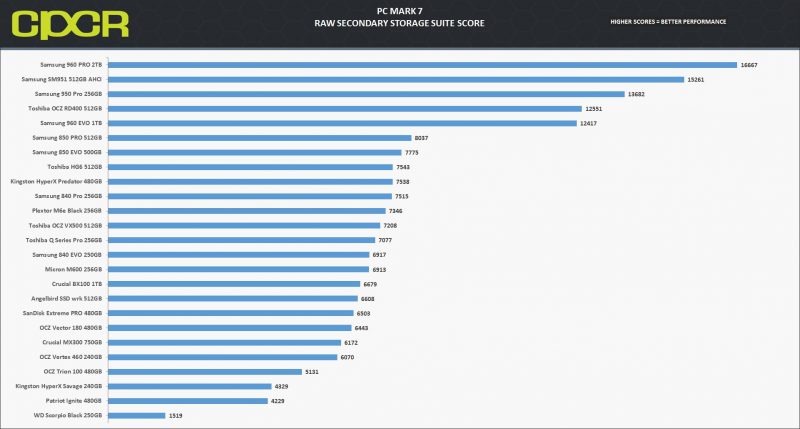 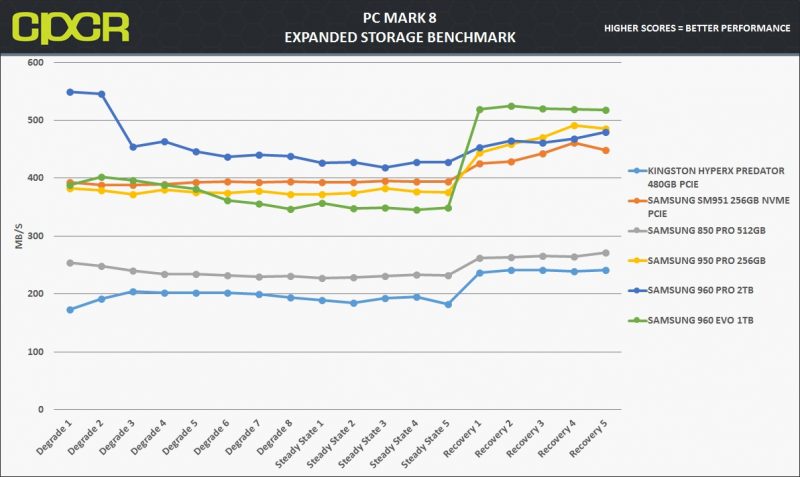 In the heavy workloads of PC Mark 8’s Expanded Storage Benchmark, the Samsung 960 EVO is a very strong performer as well especially in the lighter recovery workloads where the SLC cache was able help the drive outperform even the Samsung 960 PRO.

[section label=”FIO – Fresh Out of the Box”] 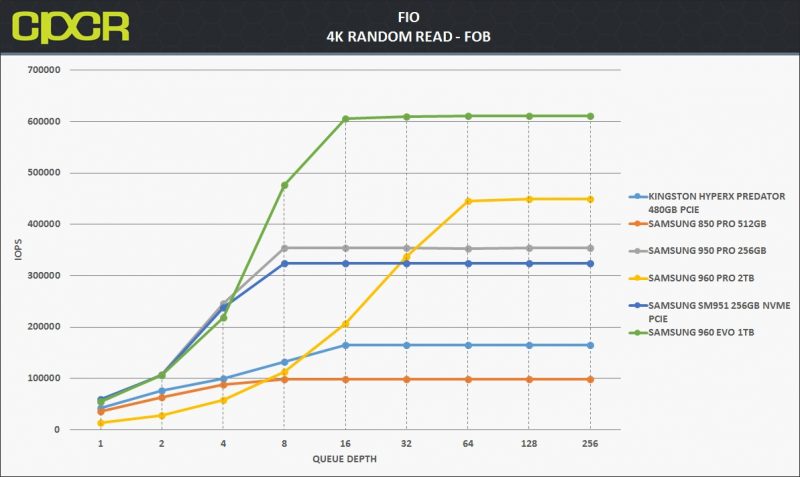 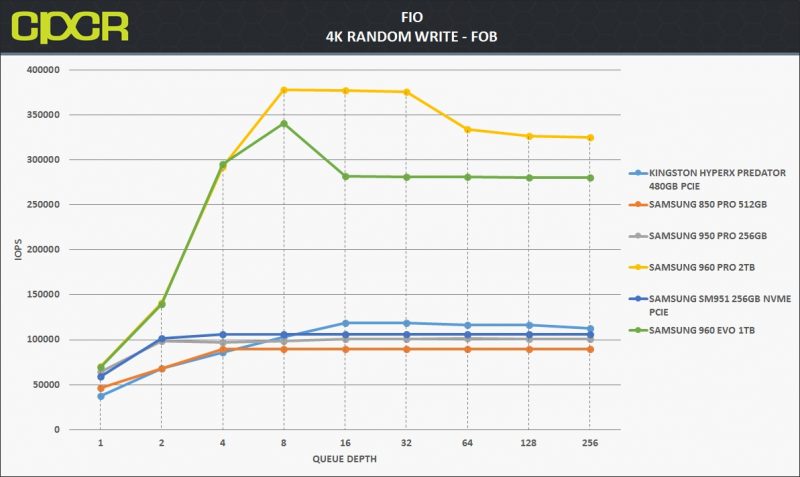 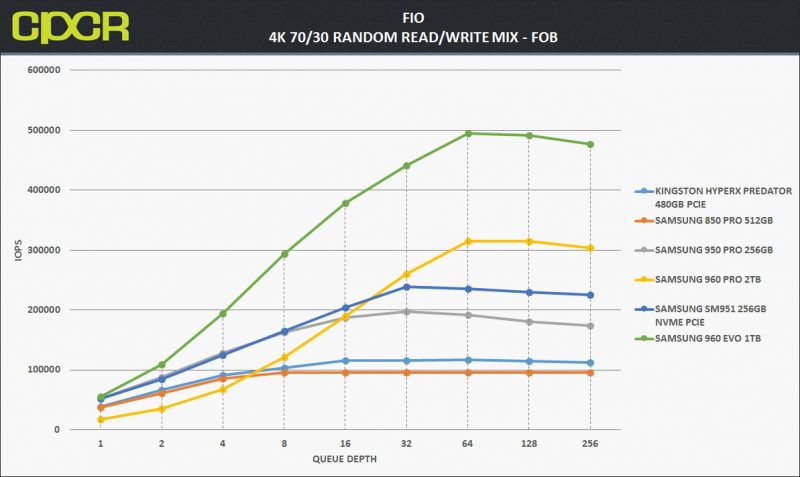 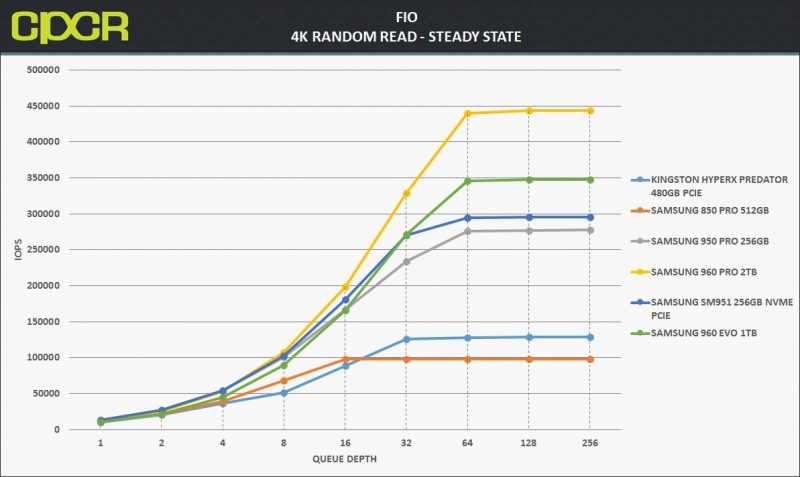 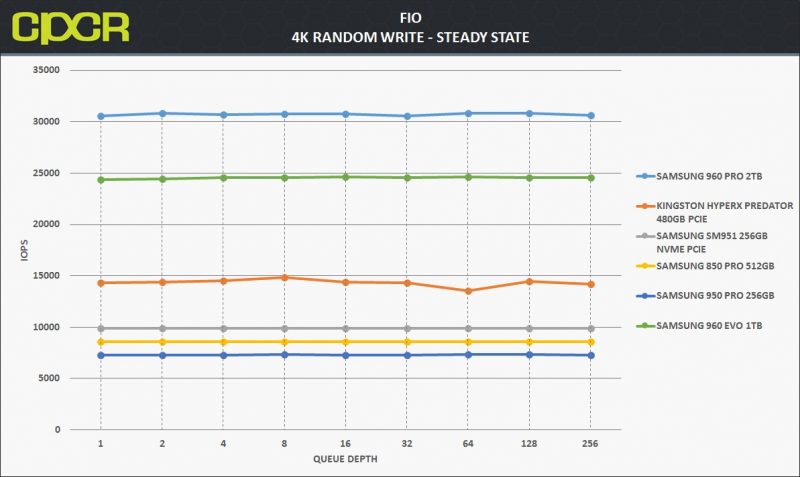 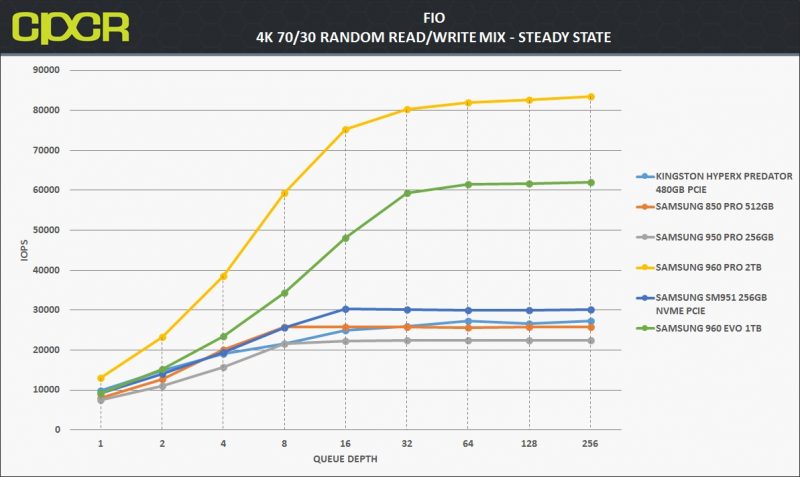 As with other Samsung SSDs, write consistency on the Samsung 960 EVO is among the best we’ve seen.

Latency is very good as well. Latency is kept under 2ms even at its worst.

Testing methodology is very similar to our testing for 4K random write consistency. We use a fairly standard method, which includes both filling up 75% of capacity as well as 100% capacity twice with sequential 128k data followed by the actual test itself, which is running 128K random writes at a queue depth of 32. By recording the IOPS every second for 2,000 seconds, we’re able to get a good look at what kind of performance can be expected when the drive is relatively new, when it’s heading towards steady state, and when it’s actually in steady state. 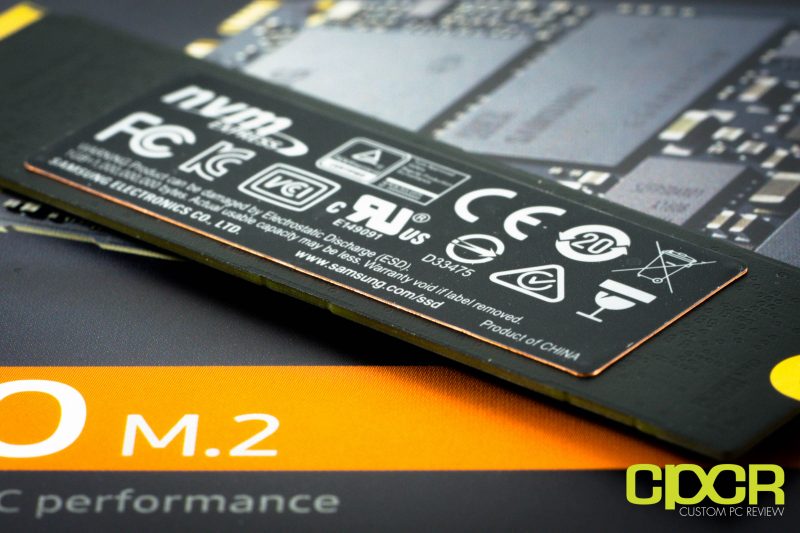 In testing, we noticed that the Samsung 960 EVO carries multiple heat thresholds which prompts reductions of performance once these thresholds are reached. The first threshold is in the mid-70°C range while the second threshold is somewhere in the mid-90°C range. 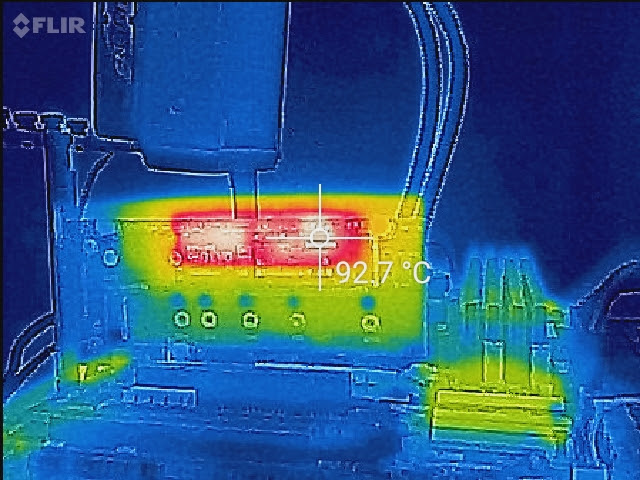 Here’s a look at the Samsung 960 EVO with a thermal camera. Thanks to the heatspreader, the heat is distributed across the entire length of the PCB very well. 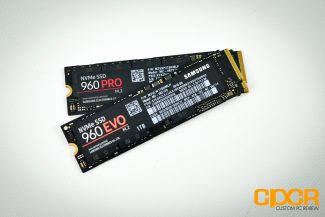 Given the fact that the Samsung 960 PRO destroyed every other consumer SSD on the market in every single performance metric, we had very high expectations for the Samsung 960 EVO and with testing out of the way, I can safely say that it has met and exceeded those expectations.