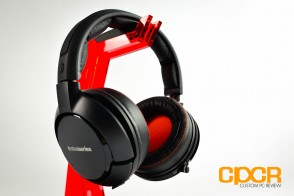 Wireless headsets are awesome. Not only do they make you look like a badass when gaming all by yourself, no cord also means you can do stuff like grab a soda from your kitchen without putting your music on hold. While we’ve seen a number of companies release some impressive wireless gaming headsets lately, SteelSeries has been rather inactive in updating their wireless headsets until now.

Aside from losing the cord on the headset, Steelseries’ also includes a newly designed base station specifically for the H Wireless which includes nifty audio features such as ChatMix, Livemix and Dolby 7.1 Virtual surround sound. Like most newer SteelSeries products, the H Wireless is designed for versatility as well which means it’ll work with pretty much every platform including PC, mobile, Xbox and Playstation.

A Closer Look at the SteelSeries H Wireless 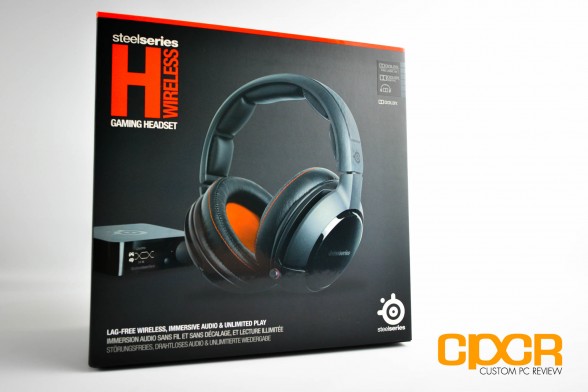 Here’s a look at the packaging for the SteelSeries H Wireless Gaming Headset. 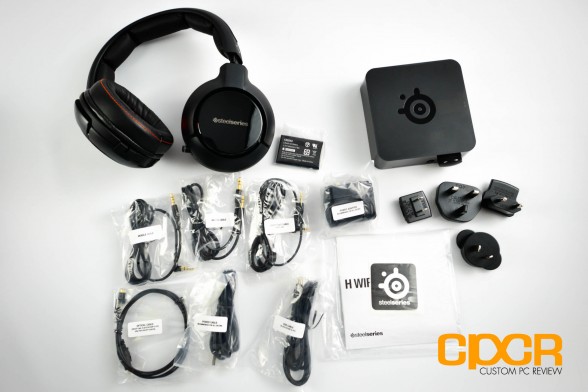 The SteelSeries H Wireless comes with practically every cable necessary for connecting your PC, mobile device, Playstation, and Xbox. It even comes with different power plug adapters for use around the world and an extra battery to swap in during those extended gaming sessions. 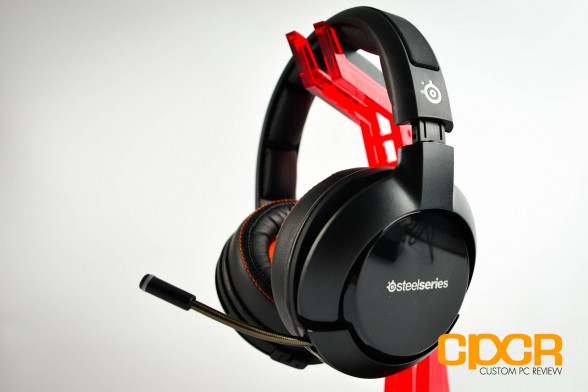 Out of the box, the SteelSeries H Wireless is quite a good looking headset. The entire unit is constructed of lightweight matte plastic and the earcups are glossy plastic which helps create a more professional look. Like most SteelSeries headsets, the H Wireless also includes a retractable microphone for voice communications. 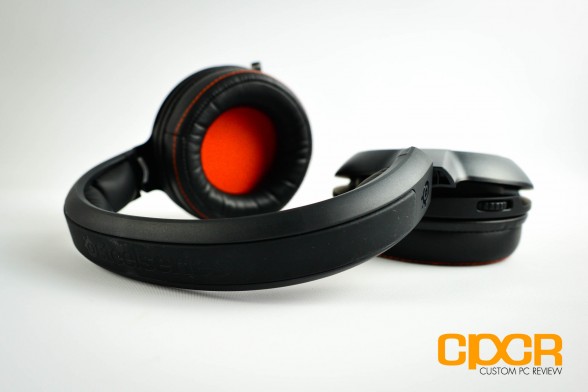 The top of the headband has a strip of rubber to increase grip when carrying the headset around. The earcups also rotate to reduce space needed when traveling. 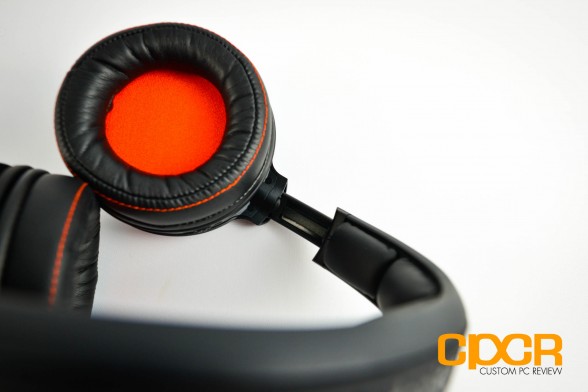 For the H Wireless, SteelSeries is using soft and thick memory foam padding, which allows for good comfort even with extended gaming. The earcups are quite large as well, which will make it comfortable even for those with larger or more sensitive ears. 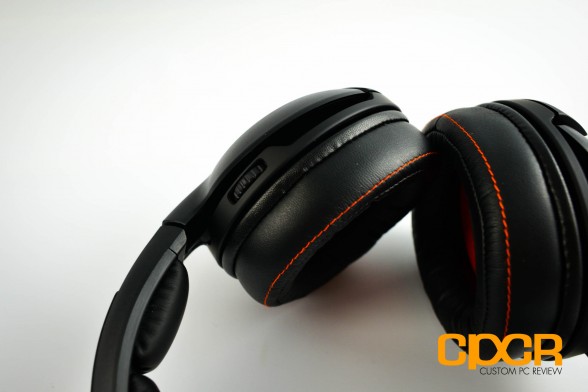 A control wheel can be found on the right earcup which allows basic adjustments directly from the headset. This is very useful for controlling the volume when the base station is out of reach. Additionally by pushing down on the wheel, other settings can also be changed such as the source, profile or equalizer preset. 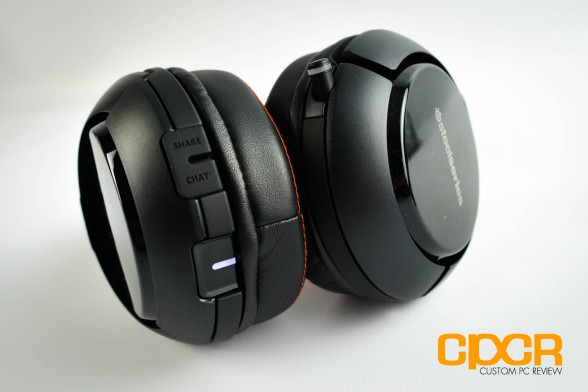 On the bottom we can find the power switch with its white LED indicator lights when the unit is on. 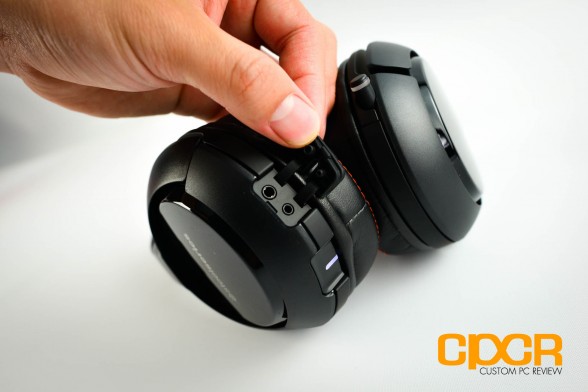 Opening a flap on the bottom also reveals a 3.5mm audio sharing port for sharing audio from the H Wireless to another audio device of your choosing as well as a 2.5mm audio port for Xbox microphone use. 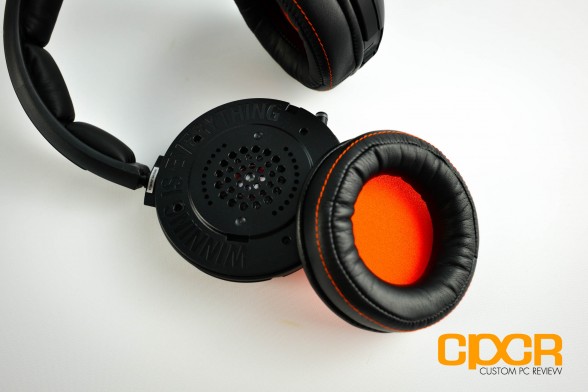 Earcups on the SteelSeries H Wireless can be removed, which allows easy washing or replacing. 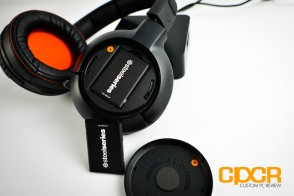 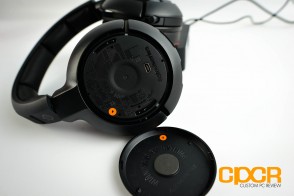 Each of the glossy earcups on the SteelSeries H Wireless can be removed with a simple counter clockwise twist. Inside the left earcup we get a slot for a battery. The SteelSeries H wireless comes with two lightweight 3.7v, 1000mAh flat Li-ion batteries for uninterrupted wireless operation. Inside the right earcup, there’s a mini USB port. Unfortunately, the mini USB port isn’t designed to do anything other than update the firmware down the line. 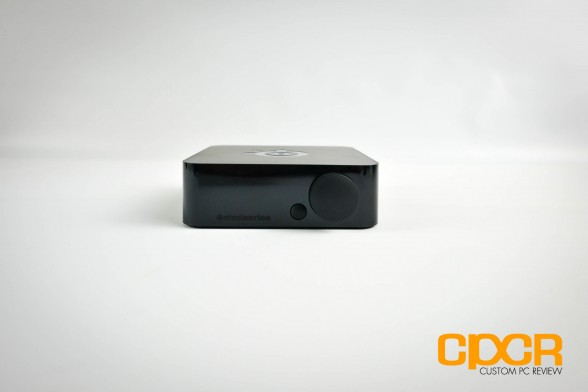 The H Wireless base station is fairly simple with a minimalistic design that follows the look as the headset. It features a LCD display and two buttons, one of which doubles as a volume/selector knob. 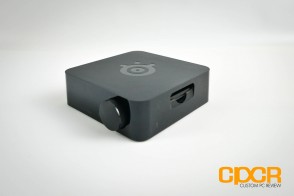 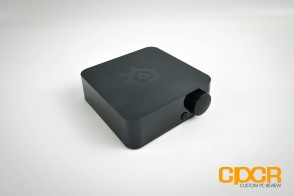 The subtly rounded corners of the base station makes the unit look extra sleek. The slot on its side is actually used to charge the spare battery. When the battery is inserted, an icon will pop up on the onboard LCD screen showing its charge level. 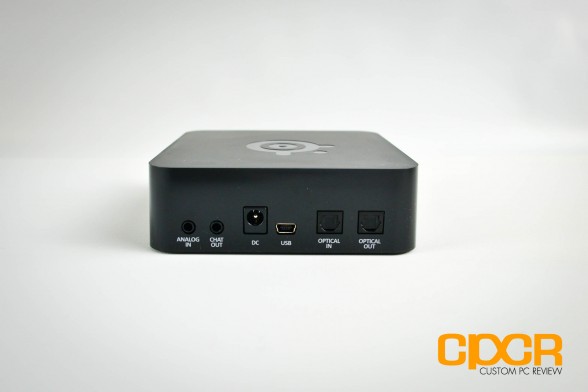 Because the Wireless H is designed to be compatible with a number of devices, there’s an array of ports at the rear of the transmitter. We get a 3.5mm analog in, 3.5mm chat out, DC in, USB in, optical in, and optical out. This should pretty much cover any audio device you may have. 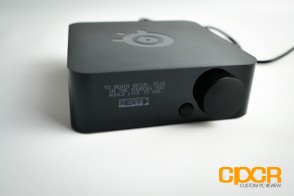 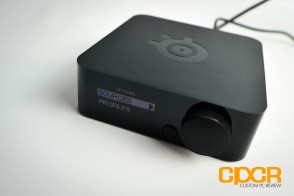 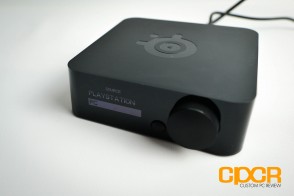 The setup process is quite straightforward. There’s no fiddling with any drivers or software. Just plug the transmitter into the device and create a source profile. The instruction manual included in the box didn’t cover the entire set up process, but the on screen instructions should be self-explanatory.

The two button and selector knob system was also extremely intuitive. There’s a satisfying “click” when turning the selector knob, and the button presses feel pretty meaty too. All of which translates to excellent build quality. 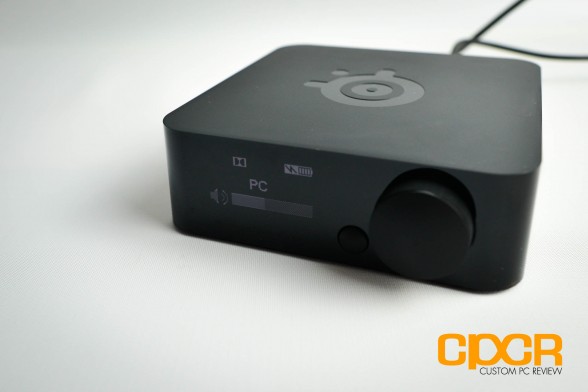 The default display on the LED is the volume level. The brightness of the screen can be adjusted via the onscreen menu. 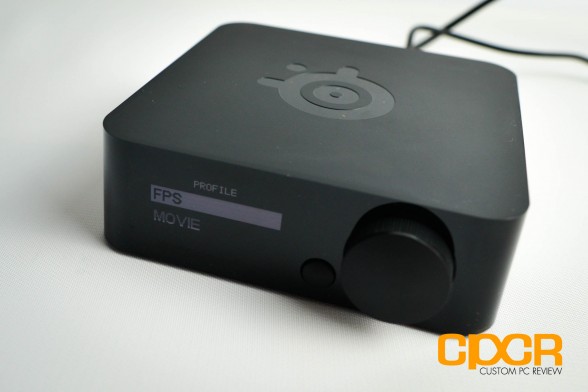 You can adjust the equalizer settings and setup specific profiles through the transmitter’s onscreen menu as well. 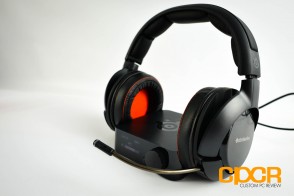 Right out of the gate, the nice thing about the SteelSeries H Wireless is that it’s ready to go as soon as things are connected. The entire set up time from opening the package to having it playing audio wirelessly only took no more than 10 minutes.

Starting off with EA’s Battlefield 4, the SteelSeries H Wireless was quite good here, excelling particularly in the high and midranges giving gunfire and footsteps exceptional clarity. The Dolby Virtual 7.1 Surround Sound drastically expanded the sound-stage and increased the dimensionality of the audio as well. The only minor gripe for me is since Battlefield 4 is so saturated with heavy explosions, I felt the bass to be slightly lacking compared to the bass heavy Creative or Razer headsets. This can be slightly rectified with some slight adjustments in the EQ settings, but those looking thick, deep, rumbling bass will probably want to look elsewhere.

Steelseries advertises the H Wireless with audiophile grade sound, and true to their claim, the H Wireless is tuned with a very balanced audio profile. After listening to a variety of genres including classical, rock, dub-step, and jazz, I noticed that treble was undoubtedly its strongest range. By default, high piano notes were clean and satisfying, but slightly cut into the mids at times. The mids while fantastic on its own, but did sound significantly better with a small boost in the EQ settings. Just as the gaming test, the H Wireless under-delivered on the low end with the low-end sounding tame and lacking oomph.

For movies, I watched the Blu-ray edition of Pacific Rim, which comes with both a fantastic DTS-HD Master Audio 5.1 and 7.1 audio track. Personally I felt like the Wireless H delivered an OK experience overall as it struggled to deliver satisfying explosions (and there was lots of them), although it compensated by delivering amazing performance in the mid and higher ranges.

As for the base station, it’s evident that Steelseries’ engineers focused a great deal here as it’s the best base station I’ve seen on any wireless gaming headset on the market. Its modern design looks great on the desk, but more importantly the large LED display is easy to read and the entire system is exceedingly easy to use. SteelSeries doesn’t include instructions regarding all the functionality onboard, but it’s fairly easy to figure things out. As for the transmission range on the headset, it was a lot better than I had expected. With the base station setup in my bedroom on the 2nd floor, I was able to listen to music in my basement with no loss of audio quality.

Battery life on the H Wireless was great as well. Steelseries included not just one, but two rechargeable batteries with the headset and each battery lasted about 17-20 hours of use per charge. It takes about 1 hour to fully charge one battery through the base station.

The microphone on the H Wireless is pretty much the same standard retractable microphone from every other Steelseries headset. The sound quality was good enough for Skype calls and such, but for those game commentators out there, don’t expect it to be anywhere near the quality of a studio grade microphone. The microphone didn’t have much noise cancellation either as keyboard strokes and other background noises were clearly heard by my friends in the Skype call. I was also looking forward to use the Livemix and Chatmix feature, which allows game audio and voice audio to be adjusted and mixed independently of each other, but unfortunately it’s disabled unless you have voice and audio on separate channels. Since I’m testing the H Wireless on PC and I don’t have a Playstation or XBOX, I was unable to test this functionality. 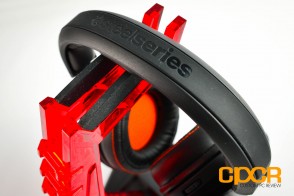 Typical of SteelSeries products, the H Wireless is as comfortable as it is attractive and despite having a battery and a receiver inside the earcups, the headset is literally a featherweight. Premium grade memory foam padding was generously applied to the earcups and headrest, adding to the comfort as well as its high-end aesthetics.  The control wheel integrated on the earcup also lets you change settings wirelessly from the headset as well which is great for those couch gaming sessions.

Music lovers who enjoy pop and light classical are going to have a blast as the Wireless H has excellent treble and mids, though sometimes the two ranges do overlap slightly. Fans of dubsteps and bass heavy music may be disappointed with weak bass performance, but bass can be boosted a bit through the EQ settings, but unfortunately those who enjoy extra deep, thick, bassy audio will be disappointed. Despite this, the weak bass was mostly compensated by its stellar performance in other ranges. The treble and mids made gun shots sound absolutely glorious. Despite its shallow bass, explosions still managed to sound decent, especially with a little boost in the EQ.

The biggest negative (which may not even be a negative) about the SteelSeries H Wireless is that it feels….delicate. While I’m sure this was done intentionally so you don’t have a 5lb headset sitting on your head for 10 hours at a time, the H Wireless simply doesn’t feel like it’ll be able to stand up against a lot of abuse.

And… of course the price. The SteelSeries H Wireless can currently be found online at various e-tailers for ~$292.77 and it MSRPs at $300. There’s always a delicate balance between price and performance, and while the Steelseries Wireless H has mostly strong points, it’s definitely a tough sell at nearly $300.

That said to its defense, the SteelSeries H Wireless is one of the few wireless gaming headsets on the market that offers multi-platform support for pretty much everything, so it’s really in a league on its own designed for a very specific set of gamers. If you’ve got money to burn and you’re a part of that specific set of gamers, then be sure to check out the SteelSeries H Wireless.