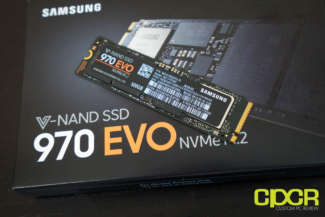 Nearly two years ago, Samsung launched their Samsung 960 PRO and 960 EVO to major fanfare. These two juggernaut introductions in addition to their enterprise cousins further established Samsung’s position as the undisputed leader in M.2 form-factor NVMe SSDs. At the time, the industry had been facing a massive shortage of NAND which slowed down product introductions across the board, but as NAND supply has finally begun stabilizing, companies are now finally introducing some new products to once again reignite demand.

Recently, Samsung launched the Samsung 970 EVO and the Samsung 970 PRO which will replace the aging Samsung 960 EVO and 960 PRO. Similar to previous generations, the EVO will be based on TLC NAND while the PRO will be based on MLC NAND however, with this generation of drives, Samsung is focusing their attention on the EVO drives, which they’ve likely realized will be the most popular for this generation. Taking a quick look at the specifications, we can see why.

Looking at the specifications, we can see that the Samsung 970 EVO is getting the largest variation of capacities ranging from 250GB to 2TB. It’s also getting a massive performance bump as well and at least in rated performance, there’s very little difference when compared to the 970 PRO. As far as the internal components, the 970 EVO is powered by Samsung’s 2nd generation 3D TLC V-NAND along with the new Samsung Phoenix controller which we’ll get into in a bit.

In order to reach these levels of performance, Samsung has kept and also improved the Intelligent TurboWrite feature we first saw introduced with the Samsung 960 EVO two years back. For those who need a refresher, Intelligent TurboWrite is Samsung’s way of enhancing TLC NAND write performance by dynamically re-purposing up to a certain amount of NAND onboard to faster SLC mode for caching purposes only. For example, the 2TB Samsung 970 EVO is capable of re-purposing up to 78GB.

While there are no differences in terms of the size of the TuboWrite cache from the 960 EVO, Samsung has managed to squeeze out additional performance on the 970 EVO likely due to the faster controller or a more efficient algorithm. 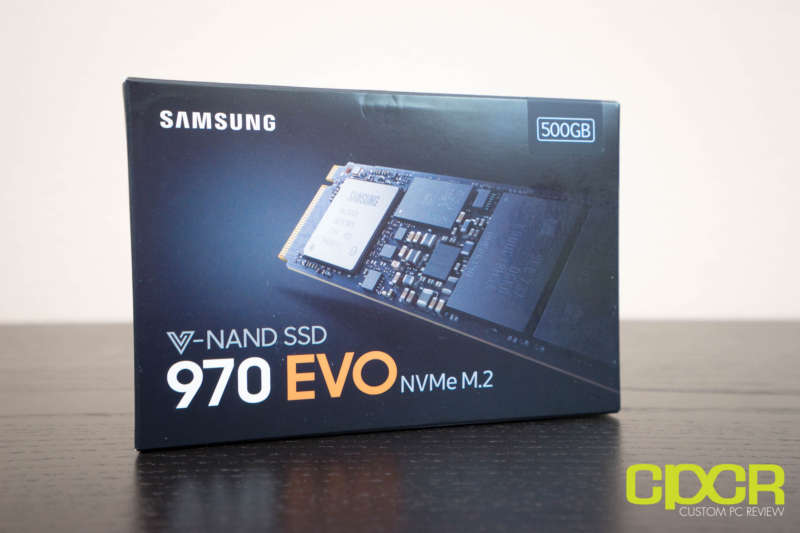 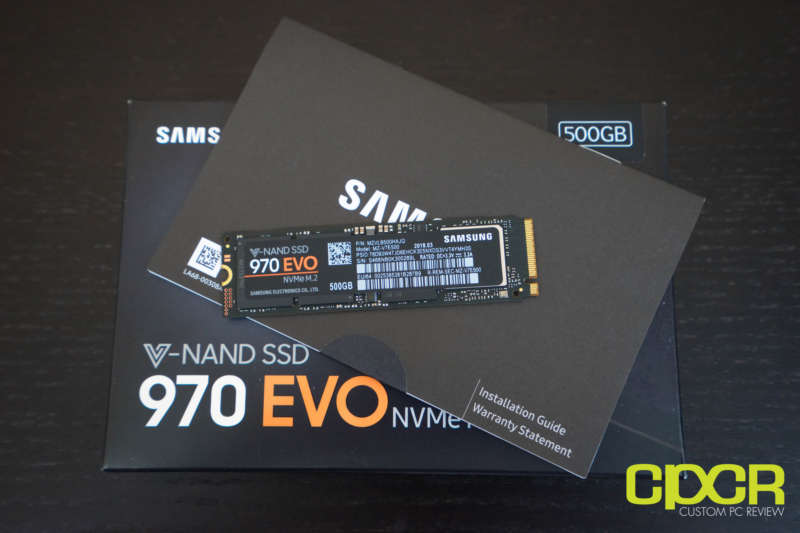 Included in the packaging is the Samsung 970 EVO 500GB along with some documentation.

Here’s a look at the Samsung 970 EVO 500GB. The drives includes two NAND packages, a DRAM package, and the new Phoenix controller. 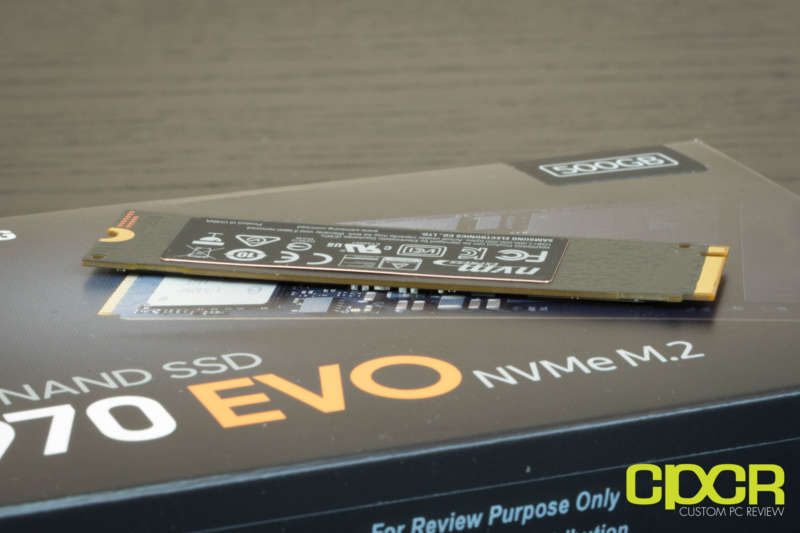 The Samsung 970 EVO also includes the heat dissipating drive label which we first saw introduced with the Samsung 960 series SSDs. The drive label helps distribute heat evenly across the drive and ultimately dissipate it. 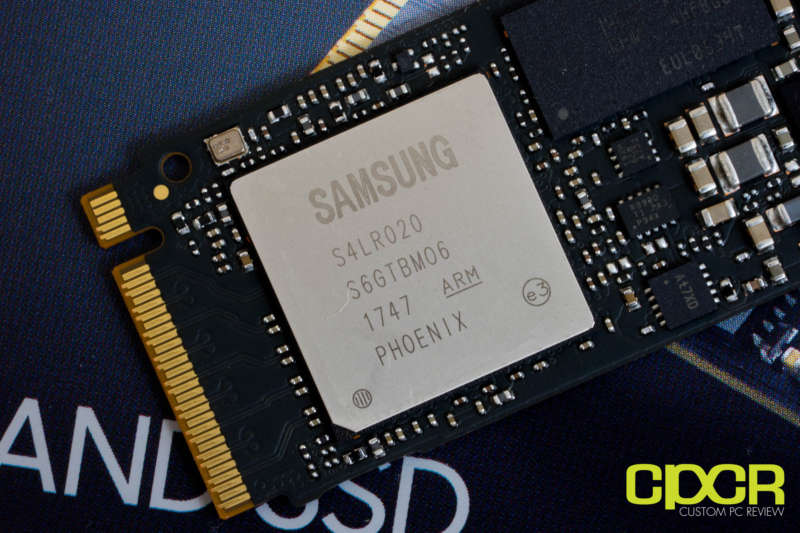 The new controller on the Samsung 970 EVO is the Samsung Phoenix controller which is a 5-core ARM controller. While little detail has been provided as to what each of the cores do, it’s safe to say that this is a very powerful controller as it’s not only employed here, but in many of Samsung’s top end enterprise SSDs as well. For improved heat dissipation, the controller package is now coated with nickel. 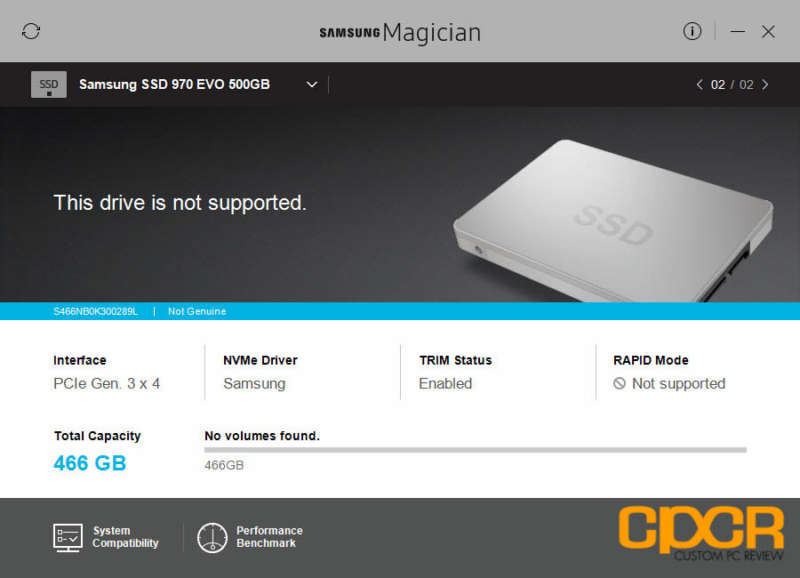 Here’s a look at Samsung Magician. Since the utility hasn’t been updated for the 970 series quite yet, only a few details about the drive are available. Along with the Samsung 970 EVO, Samsung will also be shipping a NVMe driver which will allow the drive to achieve its maximum performance. 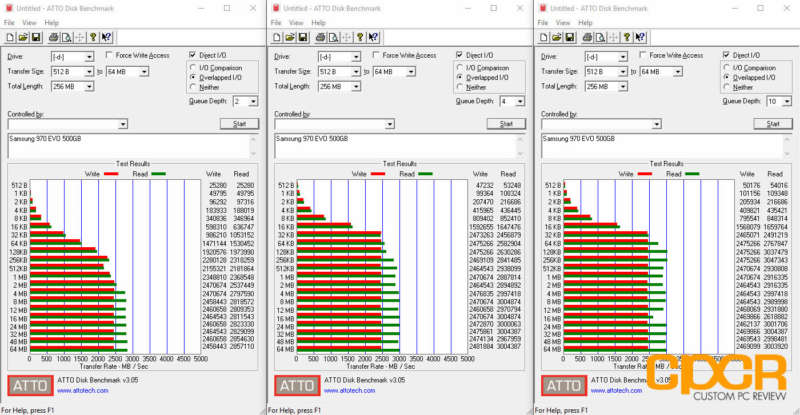 Here’s a look at ATTO Disk Benchmark. Here, the drive is easily able to achieve ~3GB/s sequential reads and ~2.4GB/s sequential writes. Performance here is stellar despite the fact we’re looking at a drive with TLC NAND. 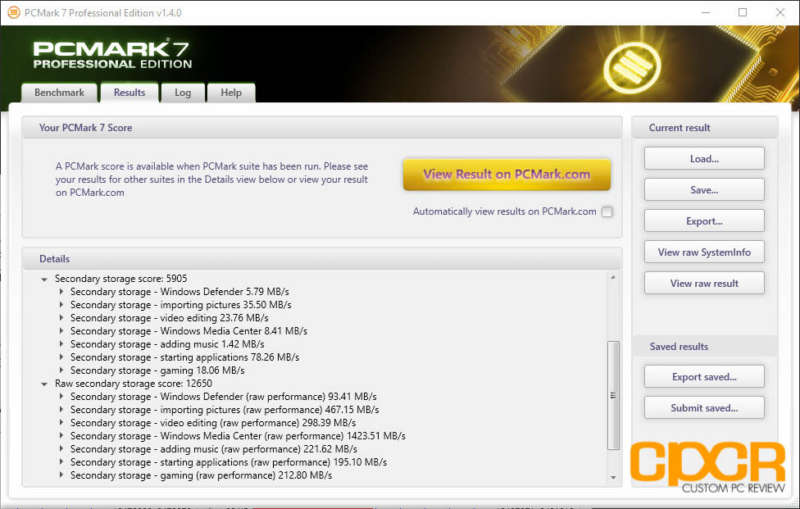 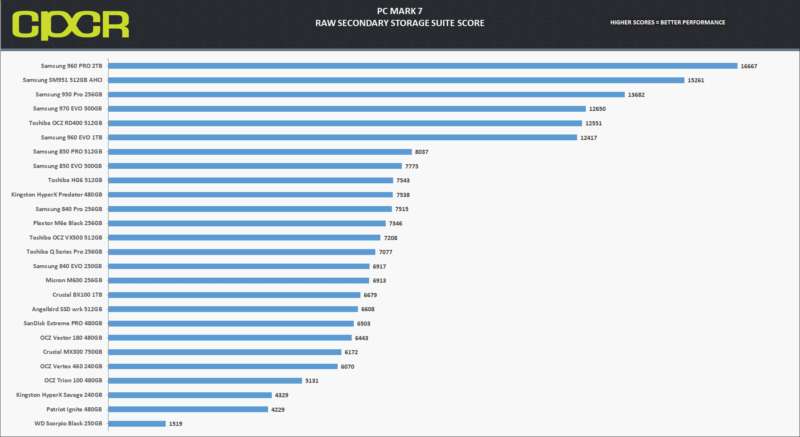 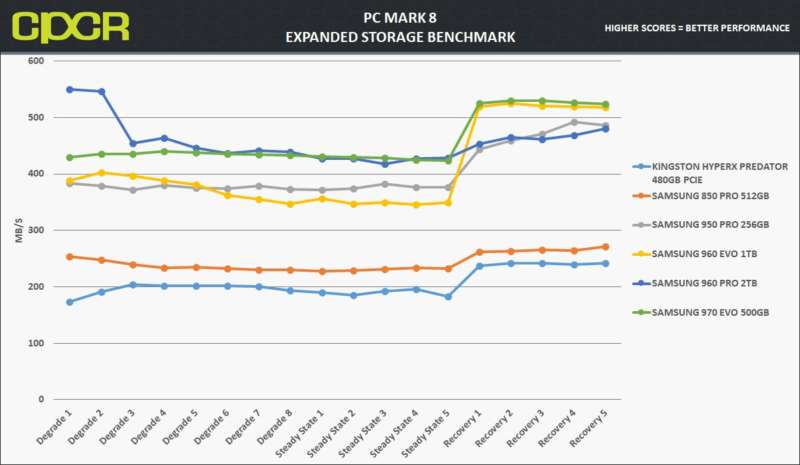 In PC Mark 8’s Expanded Storage Benchmark, the Samsung 970 EVO was very surprising as it was able to perform similar to the MLC NAND based Samsung 960 PRO in heavy workloads while at the same time, perform extremely well in light workloads thanks to its dynamic SLC caching system.

[section label=”FIO – Fresh Out of the Box”] 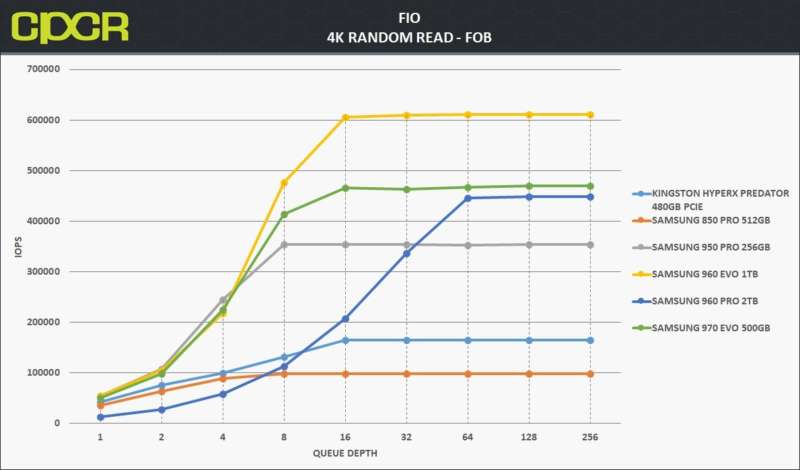 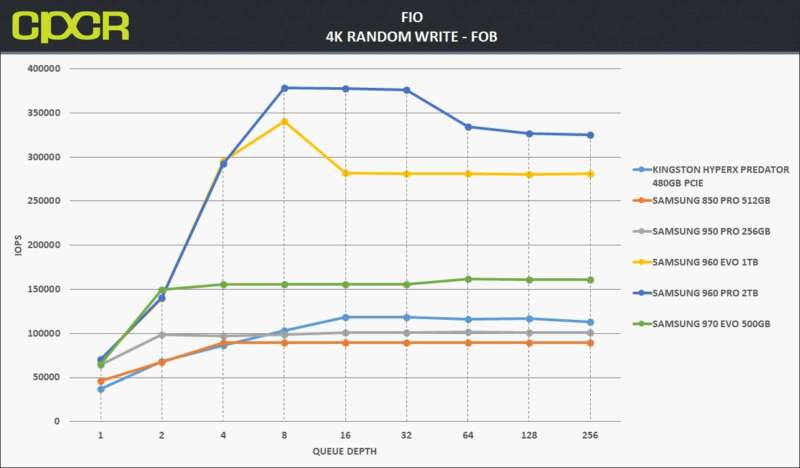 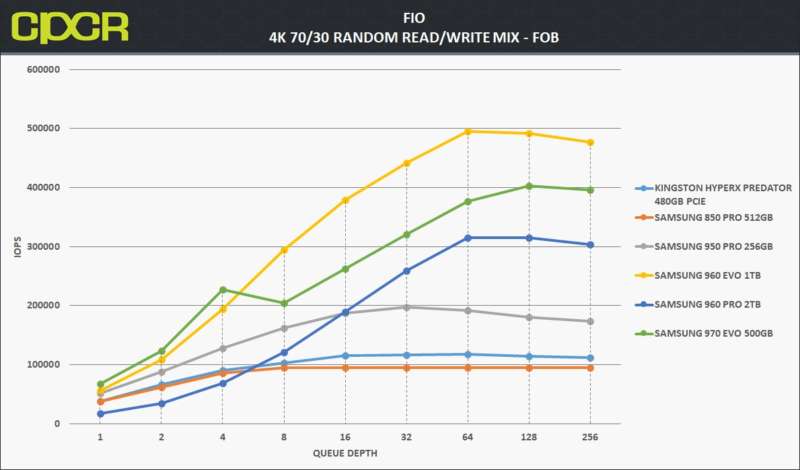 Fresh out of the box performance was extremely good as expected. In the mixed workload testing, we can see that Samsung has done some optimization on the 970 EVO for workloads under QD4. 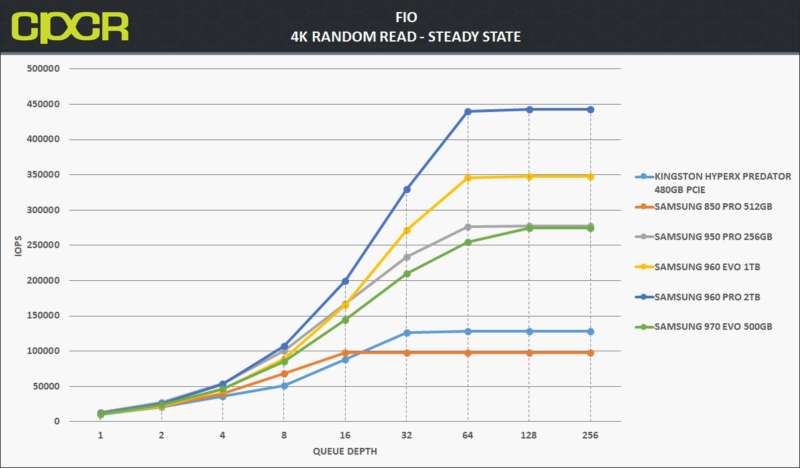 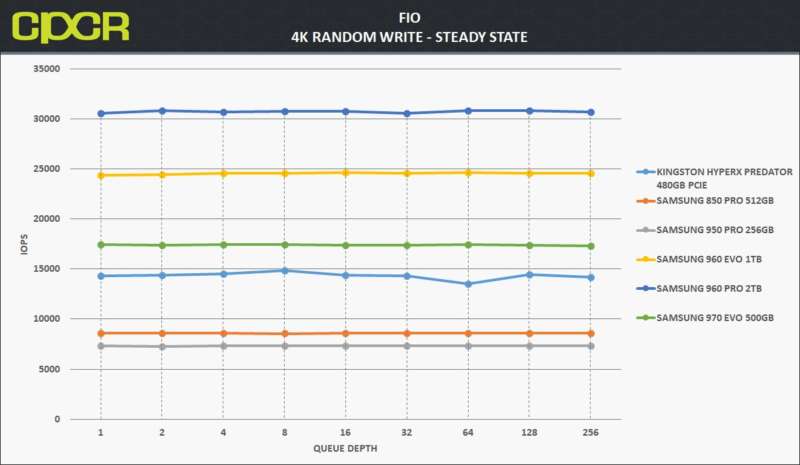 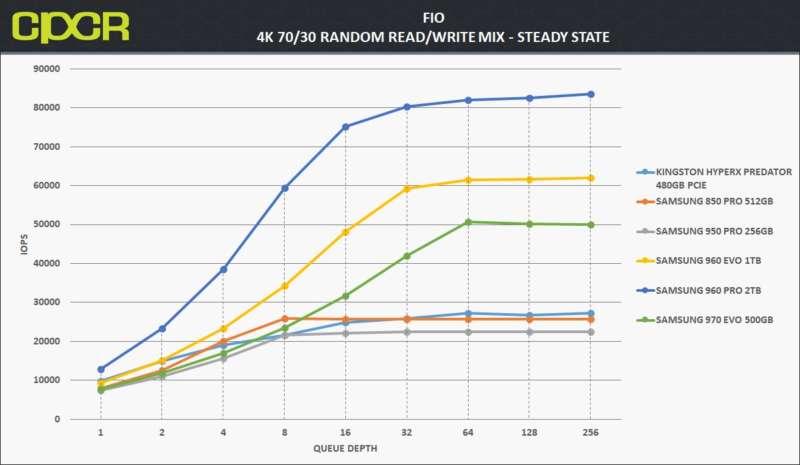 Latency is very consistent as well with maximum latency under 2ms even during the heaviest write loads. 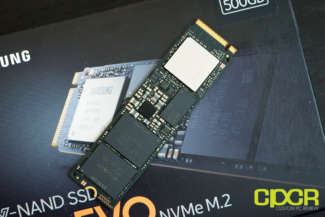 When Samsung launched 3D TLC NAND several years back, it was clear that it would become the ultimate mass market NAND product for the consumer market. While TLC NAND had quite a bit of challenges in the 2D planar NAND space in terms of performance and endurance, 3D TLC NAND is free of many of these issues which has resulted in the success of the Samsung’s EVO lineup of SSDs. With the Samsung 970 EVO, Samsung further solidifies 3D TLC NAND’s importance by bringing even more performance and endurance at the same pricepoint.

Ultimately, the Samsung 970 EVO represents yet another iteration of excellent Samsung SSDs and will likely be the most successful M.2 NVMe consumer SSD for the company. Those looking to upgrade to the latest and greatest in storage technology, but are also looking to maximize bang for the buck will find the Samsung 970 EVO the perfect drive to fit the bill. Highly recommended!