Thermaltake’s Legendary Keyboard Gets an Upgrade 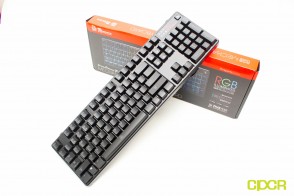 One of the most cost-efficient ways to improve the looks of a keyboard is to slap on some pretty lights. This is an easy way to boost the “wow” factor without complicated modifications and additional investment from the manufacturer.

That’s exactly what Thermaltake did with its hugely popular Poseidon Z keyboard. The Poseidon Z is well-known around the web for being one the most affordable and value-oriented keyboards on the market. Not only does its price give gamers an incentive to upgrade from membrane, it does so without compromising on build quality.

Today we’ll be taking a look at round two of the Poseidon Z, the Thermaltake Poseidon Z RGB.

A Closer Look at the Thermaltake Poseidon Z RGB 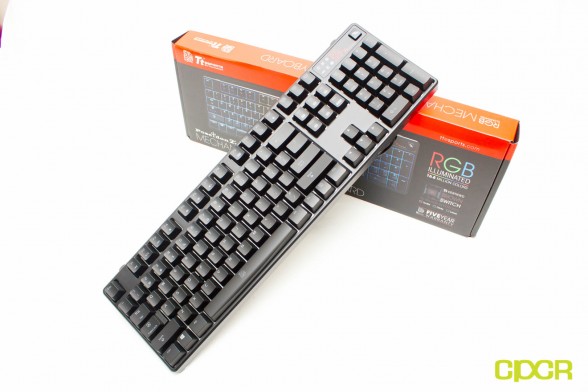 Here’s a look at the Thermaltake Poseidon Z RGB mechanical keyboard with its packaging. 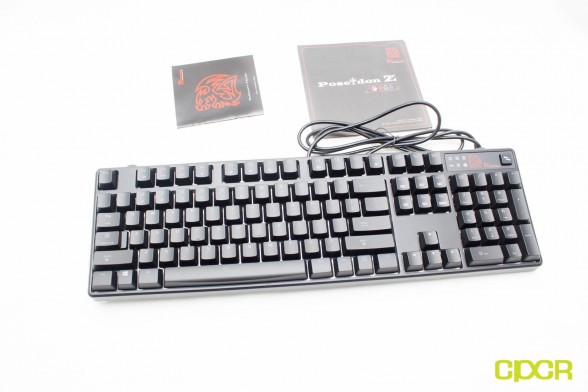 The keyboard is the only thing you’d want to keep in the box. 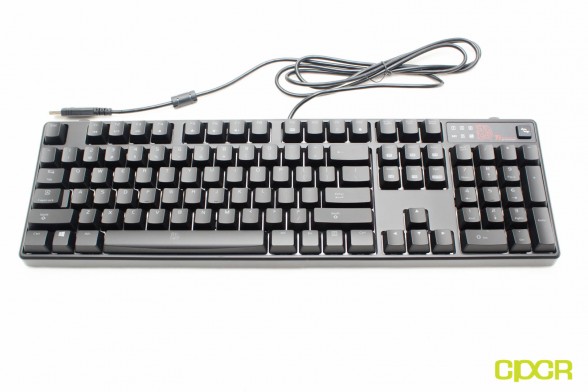 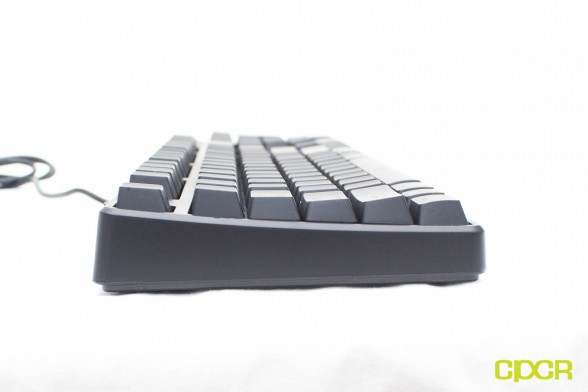 The chassis is highly raised so make sure you get a good wrist rest. 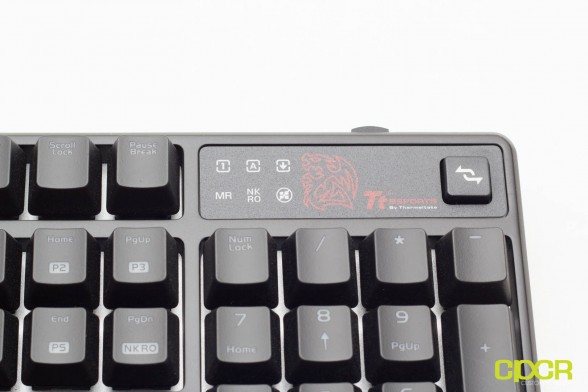 A gaming mode button sits at the top right. This not only disables the Windows key, it also switches the function of the buttons on the keyboard to your custom programmed macros. 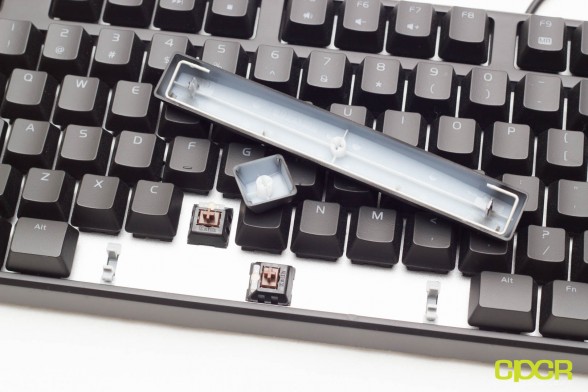 Our unit came with the Kailh Brown switches. Kailh Browns have the same characteristics as Cherry MX Browns. It has a tactile point in the middle but is quieter than the Blues. The keyboard also uses Costar Stabilizers instead of Cherry. Costar Stabilizers are often louder but have better feel than the Cherry version. 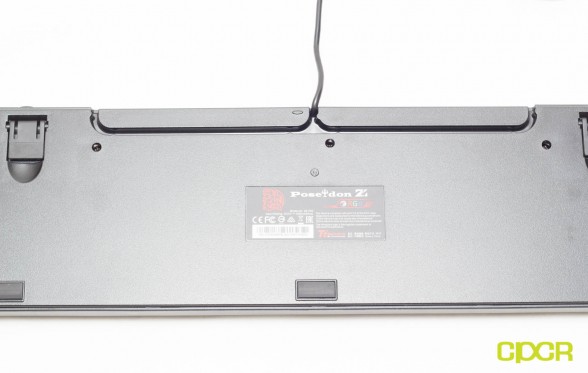 Cable channels are carved out in the back. The cable is unfortunately not detachable. There are 5 rubber feet scattered throughout the four corners, 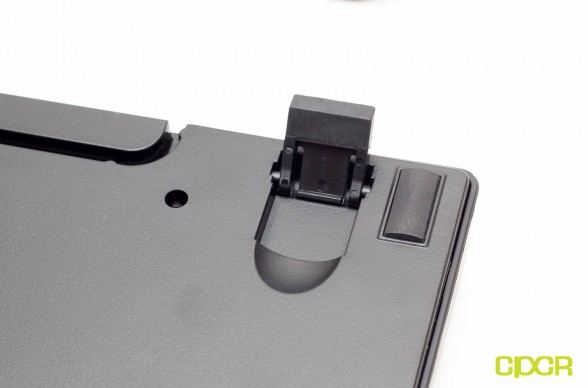 The flip-out elevator feet also has a dab of rubber attached at the bottom. 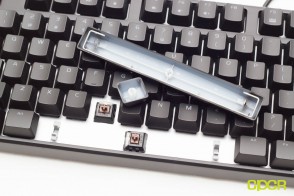 As Confucius once said: The best way to test a keyboard is to not be deliberate. I simply put the Poseidon Z RGB through our everyday routine for a week and see how it fares. Not only do I use it to compose articles, I also use it for gaming, coding, and some excel management.

It would’ve been extremely difficult to tell the Kailh Brown apart from the Cherry MX Brown if I hadn’t been told beforehand. Its tactile feedback, responsiveness, and even sound is almost an exact replica of the Cherry MX. Punching out reviews and angry emails feel just as good as my old Cherry MX Brown keyboard. I like the lighter actuation and the silent tactile bump since my brothers in arms like to slave over work in peace.

Gaming is a similar story. In my downtime, I tend to blow off some steam in StarCraft and Battlefield 4. While I’m not overly enthused about spamming keys with a tactile bump, the Kailh Brown feel faster than the Blues since the plunger is a single piece. As expected of a quality mechanical gaming keyboard, ghosting was never an issue to me and neither was lag. While it didn’t matter to me, the NKRO feature can be enabled or disabled depending on how old your motherboard is.

I usually mark easy when it comes to software, but Thermaltake’s Tt eSports software needs to be taken out back and dumped into the shredder. I was initially glad to see that the file isn’t supersized, but everything went downhill after its swift install. Not only is it sluggish, its interface is a horrific maze. With that said, it does come with some decent lighting profiles that take advantage of the RGB lighting.

On the topic of lighting, the lighting effects are stunning on the Thermaltake Poseidon Z. The keys are brightly lit with vivid colors. It’s a rare treat to have RGB lighting on a keyboard at this price range, and I’m glad to see that Thermaltake has nailed it.

The Thermaltake Poseidon Z RGB features a hardy chassis with a metal backplate that should last you for years. While the use of Kailh switches instead of Cherry may piss off some die-hard Cherry fans, there’s no indication that they are inferior in quality. The keycaps invoke less confidence as they’re molded from a thin piece of ABS plastic and are quite slippery to the touch. I also frown upon the Thermaltake logo in to the center of the spacebar.

If you’re used to Cherry MX switches, you’ll have no difficulty settling into the Thermaltake Poseidon Z RGB. Kailh has replicated the feel and sound of its Cherry MX counterparts to a damn tee. After using it for nearly a month, I still can’t find any complaints regarding their performance and durability. Keystrokes are smooth as butter and the tactile bump in the middle provides excellent feedback.

The Costar stabilizers under the larger keys (shift keys, spacebar) are incredibly nice. They do a great job at keeping the keys stable without being overly noisy.

The keycaps on the Poseidon Z RGB isn’t great. I don’t have a problem with them being ABS, but their surface is pretty smooth. This leads to them being slippery even when they’re dry. The problem worsened when moisture is added to the equation.

As an entry midrange keyboard, the Thermaltake Poseidon Z RGB is justifiably bare on features. You’re not going to find any USB or audio pass through here. Macros can be programmed on every key. They’re easy to use and activate; simply press the gaming mode switch located above the number pad to seamlessly transition between normal keyboard functions and custom macros. While the custom macros are nice, the software for the Poseidon Z RGB is a complete mess. Its cluttered interface and slow performance is a huge turn-off.

For $84.99, the simple Thermaltake Poseidon Z RGB brings you decent value and RGB lighting, the latter of which is quite rare on keyboards at this range. Brushing the drossy software aside, the Poseidon Z RGB is a very well-rounded package that should offer plenty of gaming enjoyment.