In Cooperation with Professional Gaming 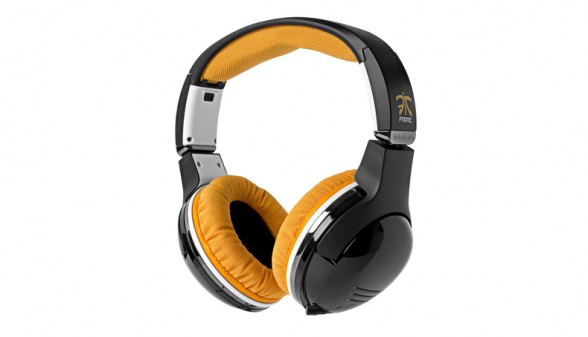 Have you ever wondered what great things happen when a world-class gaming peripherals manufacturer teams up with a professional gaming group to make a headset?

With the Fnatic Edition, SteelSeries has swapped out the SteelSeries 7H’s leatherette earpads for orange cloth-covered ones that feature SteelSeries SND Block material, which allow for better airflow and comfort while still maintaining the excellent noise isolation features of leatherette earpads. Additionally, the 7H Fnatic Edition also includes a 2m audio extension cable for those with computers farther away than 1m.  Otherwise, the headset still features the same 50mm drivers seen on the SteelSeries 7H, the same retractable boom mic, and the same ability to break into three parts for easier transport.

Question is, does the Fnatic endorsed headset live up to the SteelSeries fame? Let’s find out! 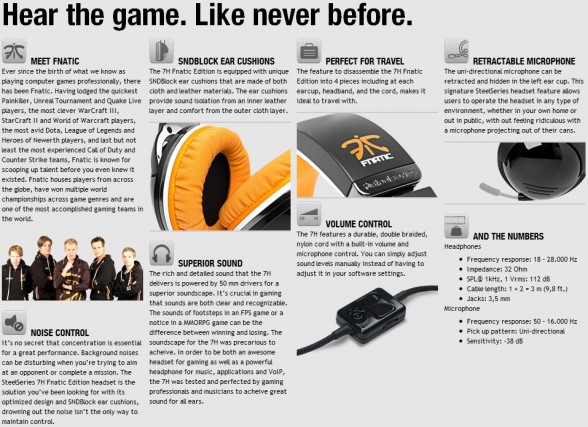 A Closer Look at the SteelSeries 7H Fnatic 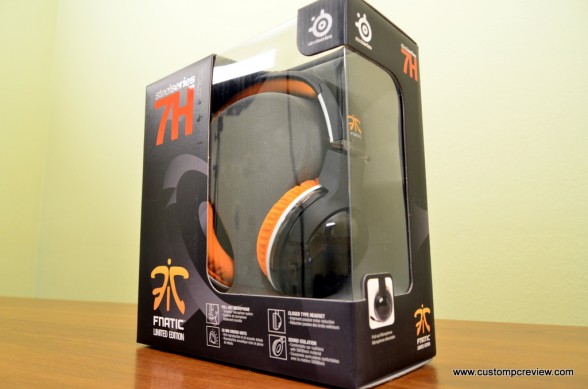 Here’s a quick tour of the box. The beautiful looking headset sporting Fnatic colors is prominently displayed through a see through window in front. 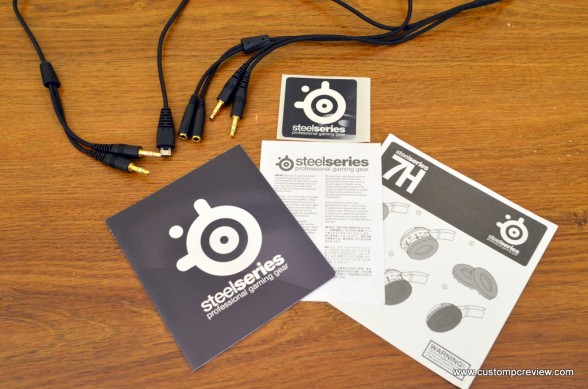 Included with the headset, you get some of the usual documentation along with 3m of braided cable. The cable connects to the headset on one end using a USB like connector and the computer on the other end through 3.5mm jacks. Additionally, the cable is split into two parts – the first part is 1m long which includes the connection to the headset while the other 2m is simply an extension cable. This is a great feature since there are those with headphone jacks on their keyboards or towers nearby, and don’t want 3m of cable hanging around, while on the other hand there are those who prefer to place their towers farther away and need that extra cable length to reach the headphone/microphone ports. 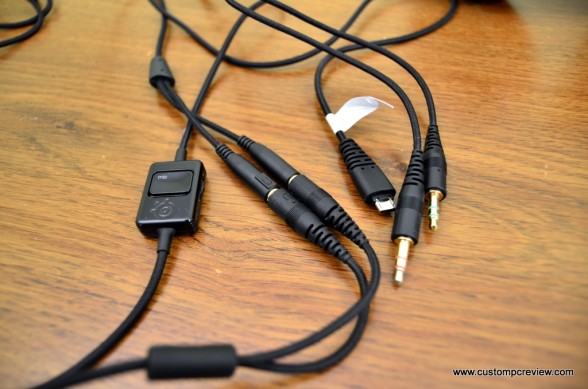 In the middle of the 1m long cable, we get a pretty basic control pod which allows volume adjustment as well as muting the microphone. 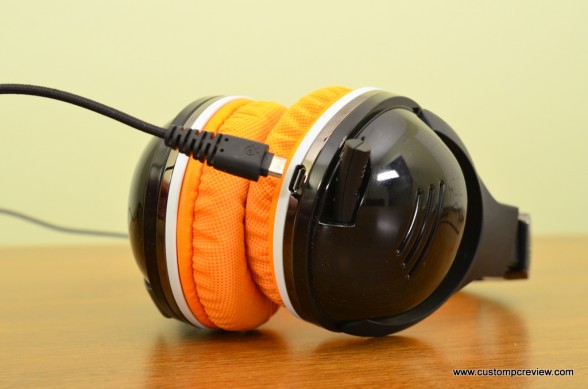 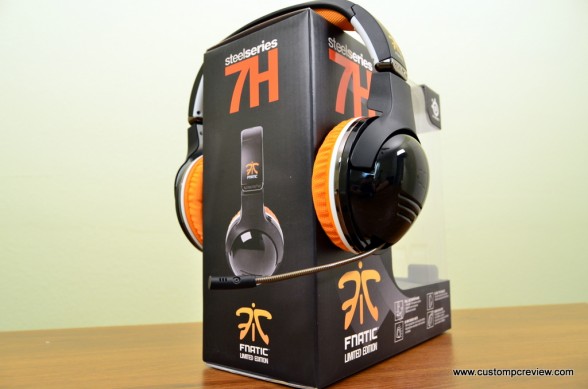 Taking a look at the headset itself, we can see that it looks pretty much the same as the original SteelSeries 7H with the exception of a new color scheme. Additionally, as expected of a SteelSeries headset we can see in the picture above that the retractable microphone can be extended when needed. 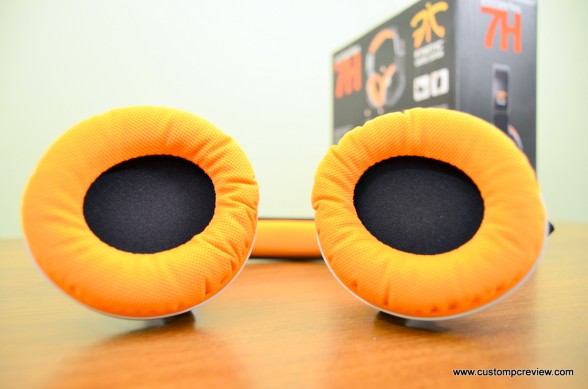 Here we take a closer look at the cloth earpads which are fabric on the outside, but includes SteelSeries SND Block material inside, which as mentioned earlier will allow better breathability than leatherette earpads during extended gaming sessions yet will feature the same great level of noise isolation which is especially good for those who frequent LAN events or tend to game in loud environments. 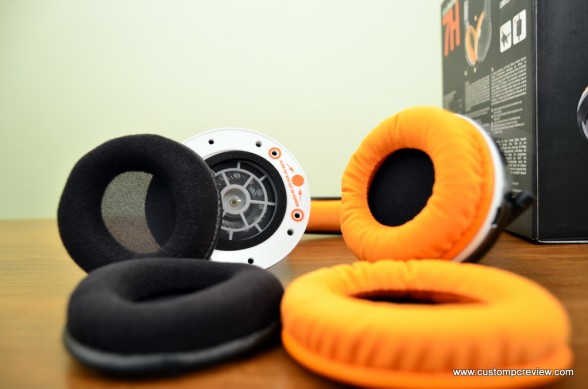 Here we can see the large 50mm driver underneath the earpads along with the second pair of earpads included with the SteelSeries 7H Fnatic Edition. The 2nd pair of included earpads are much softer than the stock SND Block earpads, and the cloth almost feels like felt. Because of the less dense material used in these earpads, noise isolation isn’t as good; however, it is even more breathable than SND Block earpads which is great for those in less noisy environments who wish to extend their gaming sessions even longer. 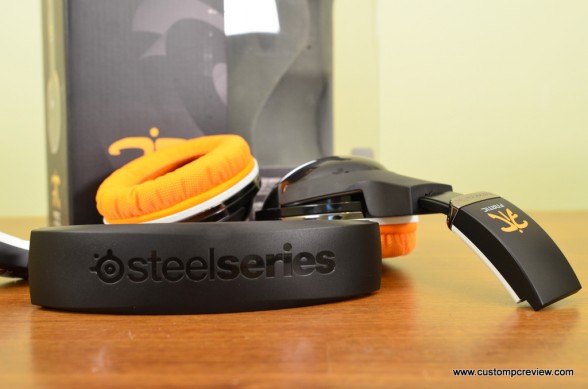 Here we can see the headset broken down into three parts. While I haven’t personally found myself needing to break these apart for travelling, it’s still a nice feature to have. 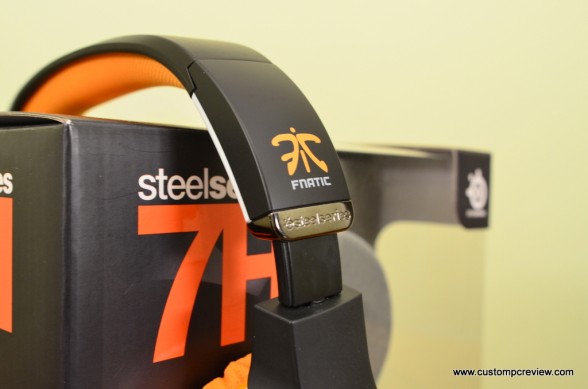 Here we can see that the headphones are constructed of all plastic (and pretty lightweight too!). This gives me the impression that there may be issues with durability in the long run. However, since I’ve only had this headset for two weeks, I can’t really tell you how they’ll fare in the in the future. Only time will tell…

In my first couple listening tests, I played a couple of games and watched a couple of movies to gauge the headset’s soundstage as well as its overall audio quality. Here, I’m mostly looking at the headset’s ability to immerse the listener into the game/movie.

Throughout my testing I found that the headset’s 50mm drivers were able to deliver a very wide soundstage, which was very useful for gaming and movie immersion. I was able to hear sounds from very far away, which gave games and movies a very realistic, three-dimensional feel of distance and location.

Additionally, the best thing about this headset is that it uses standard 3.5mm headphone and microphone jacks, which means I was able to connect it to the Creative Sound Blaster Recon 3D PCIe sound card to give the headset an additional boost in performance by widening the soundstage further and giving the headset the ability to simulate 5.1 or 7.1 audio. Safe to say, the SteelSeries 7H was very responsive to the soundcard’s algorithms and I was very pleasantly impressed.

After testing gaming and movies, I also tested the headset on a couple different genres of music as well – pop, rock, hip hop, and classical. Here, I was more focused on the headset’s ability to deliver clean and accurate audio. Overall music quality was decent for a gaming headset and was able to be further improved by the Recon 3D soundcard. Obviously, audio quality doesn’t compare to something like a set of audiophile level Beyer Dynamic DT990 headphones, but trust me when I say it’s more than enough for the casual listener. The real defining point of this headset is the crystal clear highs and the warm mids, which is something not typically seen in a lot of gaming headsets out there. It’s pretty obvious that SteelSeries has positioned the 7H as an all purpose headset, delivering a great music, movie and gaming experience. 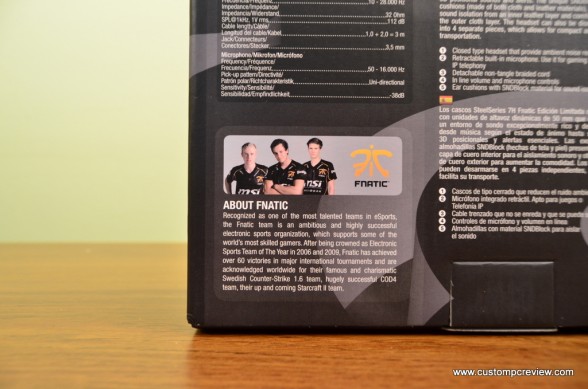 Typically for me, it’s difficult for me to find a comfortable headset. I have a big head, big ears, and I wear glasses – probably the worst combination when it comes to finding a comfortable headset. However, the SteelSeries 7H is without a doubt one of the most comfortable PC gaming headsets I’ve used to date. The secret to this is that the earcups exert the most clamping pressure around the center of the ear instead of somewhere higher like the temple area which means a lot less pain after extended gaming sessions. Additionally, the headset is light, which is a plus, and the cloth earpads that come with the 7H are extremely breathable which means your ears aren’t going to overheat after a single hour of gameplay. You also have the option of switching over to the second set of even softer and more breathable earpads which is great if the SND Block earcups don’t work out for you.

So, if you’re wondering what I thought of this headset, I’m just going to get it out of the way and tell you it’s amazing. The highs were crystal clear, the mids were nice and warm and the lows weren’t overpowering like many headsets on the market today. This means if you’re coming from headsets such as the Corsair Vengeance 1300 or 1500, you’ll really love this headset. The headset also looks absolutely fantastic too! Definitely a plus there as well.

For those coming from more bass heavy headsets such as the Creative Sound Blaster Tactic 3D Sigma or headphones such as the Beats by Dr Dre, you will notice that the bass isn’t as prominent on this headset and you might not like this headset. This is because the headset itself is tuned for balance giving equal emphasis on the highs, mids and lows – even possibly a little extra on the highs and mids. While this is an attribute I tend to prefer, those more familiar with bass tuned headsets may not enjoy the same sonic properties in the 7H. However, if you’re running off a sound card with the ability to adjust equalizer settings, the headset can be made to pump out a lot more bass although, I did find that the bass would become a bit muddy if this is cranked up too high, so it’s definitely something to keep in mind if you’re planning on purchasing this headset.

Speaking of soundcards, for those who want to push the headset to the height of its abilities, I’m also going to recommend purchasing a quality soundcard such as the Creative Sound Blaster Recon3D PCIe. If that’s not possible, you can also purchase the SteelSeries 7H USB edition, which includes an integrated sound card. However, while I haven’t personally tested that particular headset, I’m doubtful the included sound card/sound processor will be as good as a dedicated sound card solutions such as the Recon 3D.

Pricing on the SteelSeries 7H Fnatic Edition is $139.99, which makes it only $10 more than the original SteelSeries 7H. Considering it comes with better earpads, and it looks a lot better, I’d say it’s well worth the extra $10 over the original 7H. However, when compared to other headsets on the market, I’m afraid the same can’t be said. For example, the Corsair’s Vengeance 1300 headset has 50mm drivers, has a very similar acoustic profile and is priced at only $57.98. While it doesn’t have the more comfortable SND Block earpads or the awesome look, it does beg the question: is the 7H Fnatic Edition (or the 7H for that matter) actually worth more than double the price? Is the aesthetics worth it? Is the more comfortable earpads worth it? That’s your question to answer.

Bottom line is that the SteelSeries 7H Fnatic Edition is expensive, but undoubtedly a great headset. While there are headsets out there that are great for movies and gaming, but falter in music, and others are great at delivering music, but don’t do so well for movies and gaming, the SteelSeries 7H Fnatic Edition is one headset that’s able to deliver great audio in a multitude of genres, which should appeal to anyone looking for a headset that well, does it all.

Special thanks to SteelSeries for making this review possible.

The SteelSeries 7H Fnatic Edition is currently available on Amazon.