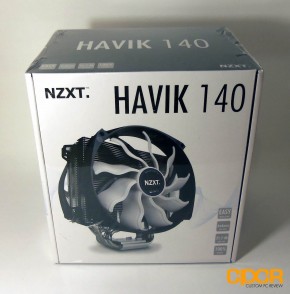 Back in 2004, NZXT started out as a computer case manufacturer based out of Los Angeles, California producing some very innovative cases such as the NZXT Nemesis, NZXT Guardian, NZXT Gamma, etc., and with their success in the computer case market, they’ve recently branched out quite a bit to cover a wide variety of computer related products such as CPU coolers, power supplies, case accessories, notebook coolers and more.

Today, we’re going to be reviewing a couple of NZXT’s offerings from their Havik series of CPU coolers, the Havik 120 and Havik 140. Both CPU coolers have quite a solid reputation among the hardware enthusiast community for performing very well at an excellent price point, so I’m quite eager to see how it stacks up against other CPU coolers on the market.

A Closer Look at the NZXT Havik 120 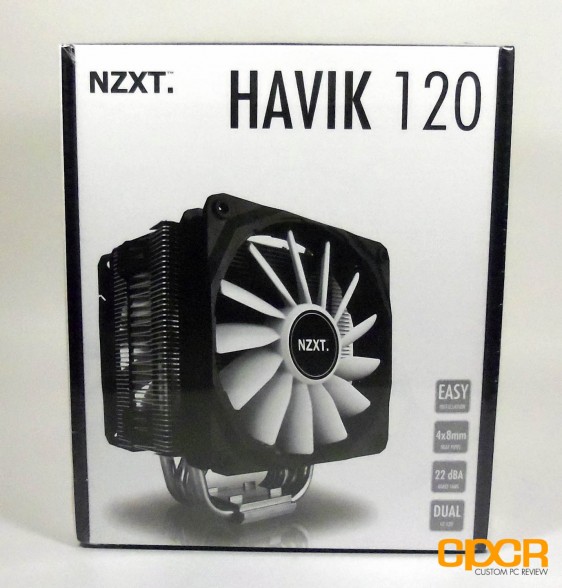 Taking a look at the front of the box for the Havik 120 we have a pretty graphic of the cooler with a few of the key features of the cooler such as “easy installation” and 4x8mm heatpipe design. 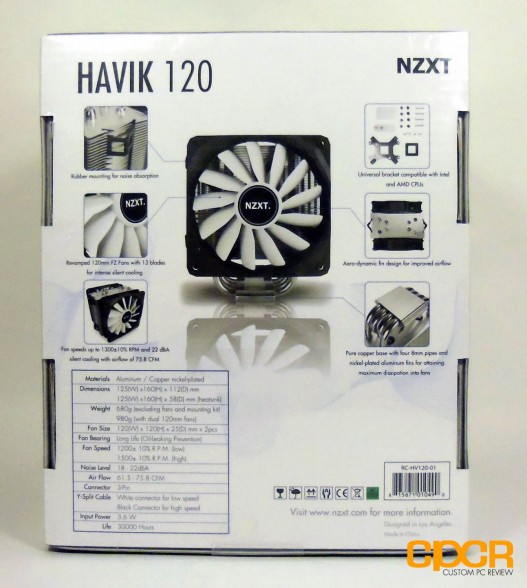 Once we spin the box around we get a much better look at the full specifications of the Havik 120, as well as a few more graphics of the cooler itself. 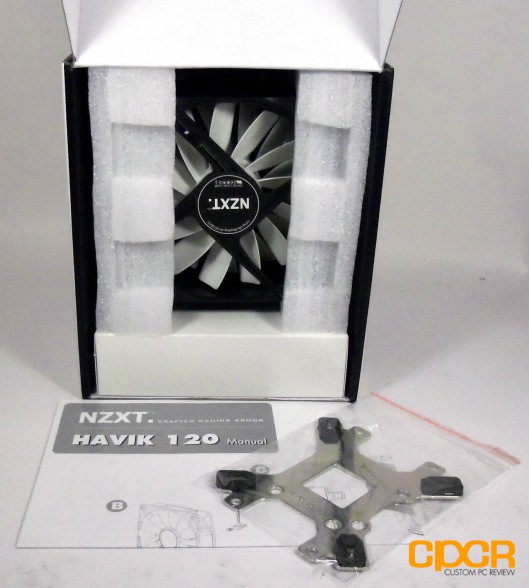 Opening the box, we’re greeted with our backplate for installing the cooler, as well as the owners manual and install guide. 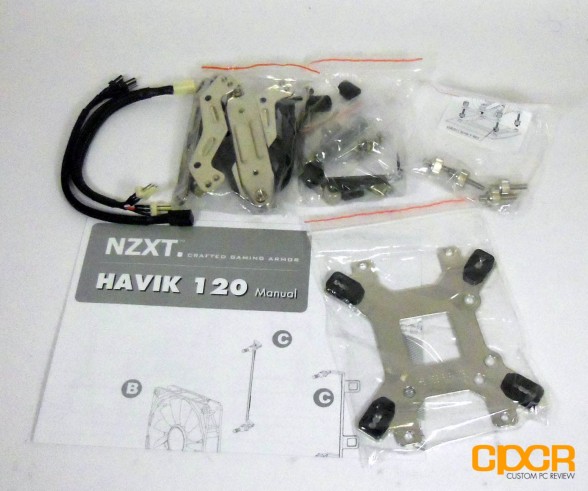 With everything open, we find all the accessories and documentation. 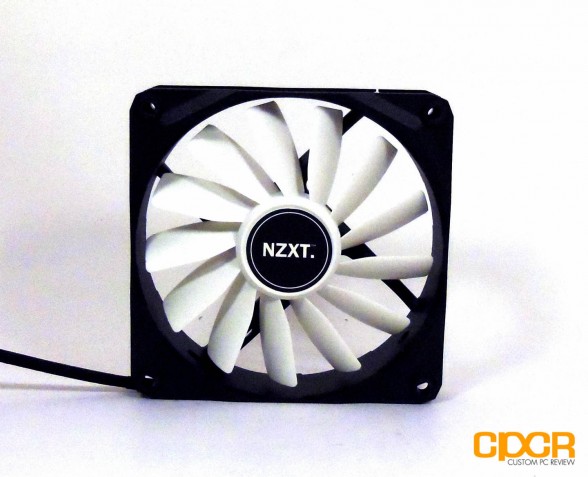 The fan that NZXT included with the Havik 120 is a standard 120mm fan, which features a sleeved cable to ensure there aren’t any stray wires hanging around. It’s a 13 blade fan, capable of pushing 75CFM at 22dBA according to NZXT. Unfortunately, the fans themselves are 3 pin fans, but NZXT does include a 4 pin to 3 pin adapter for PWM functionality. 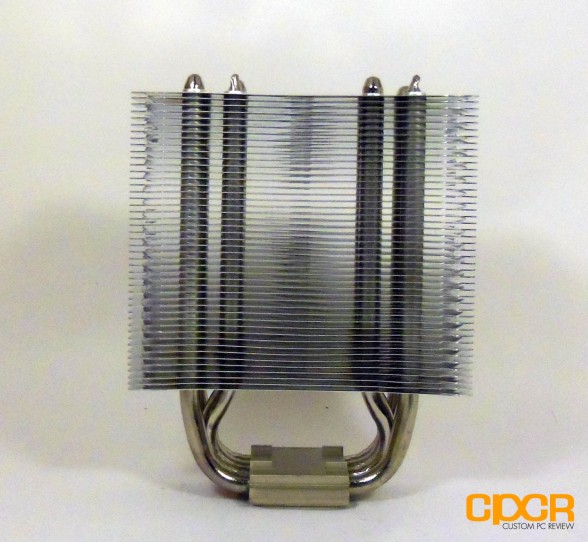 Here is the Havik 120 itself, it’s made of nickel plated copper and features aluminum fins soldered directly to the 8mm heat pipes which run vertically through the cooler. 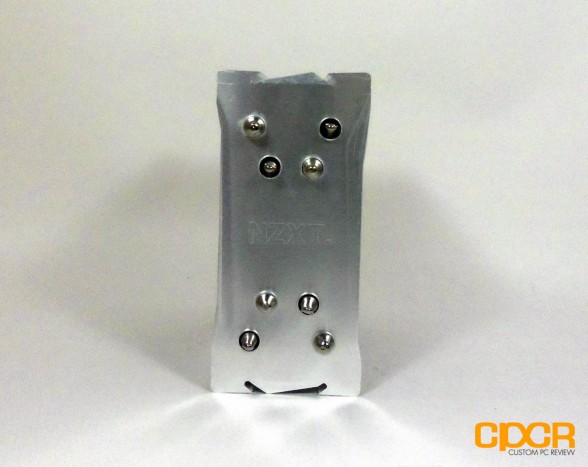 The top of the Havik 120 features the NZXT logo stamped into the top aluminum fin, and here you can see the tops of the 4 heatpipes. 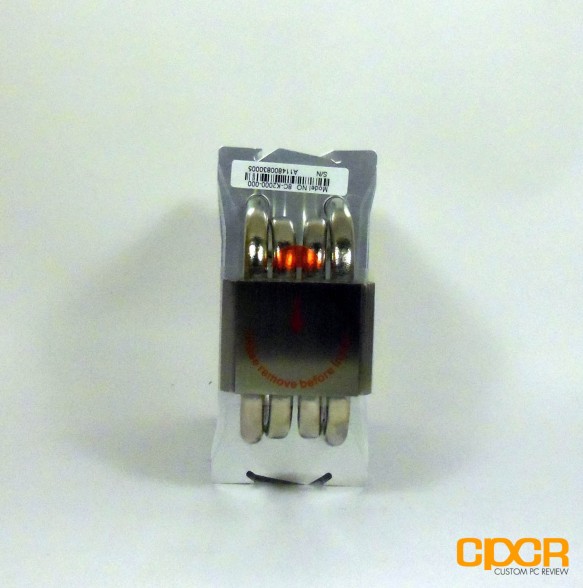 Taking a look at the bottom of the Havik 120 we can clearly see the four 8mm heatpipes that we’ve discussed already. These should give the Havik 120 an advantage over some of the other coolers on the market which feature smaller 6mm heatpipes. 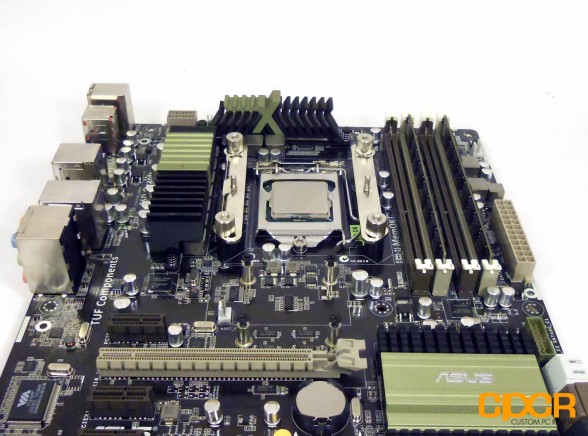 As with virtually all of the coolers I’ve tested lately, the Havik 120 features two mounting arms that allow you to simply screw the cooler down onto the motherboard. This is an excellent design as it’s very easy to work with and is very secure as well. Once you get your backplate on, you simply screw down your mounting arms and you’ll have something that looks like this. 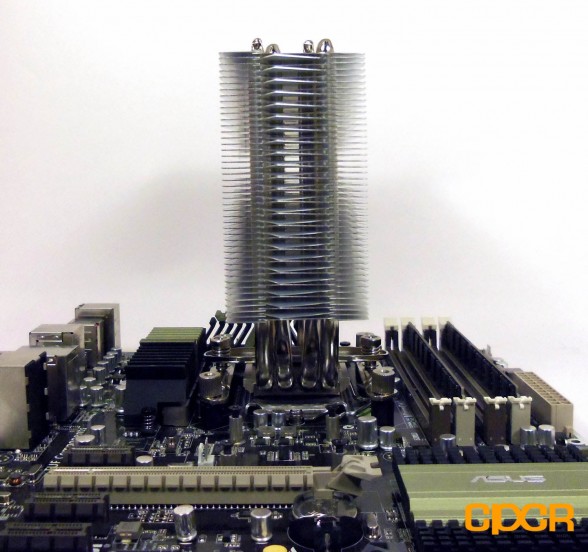 Next, you just need to screw the cooler down. To do so, you have to make sure you don’t have the fans installed, or you’ll end up having a hard time trying to install the cooler! 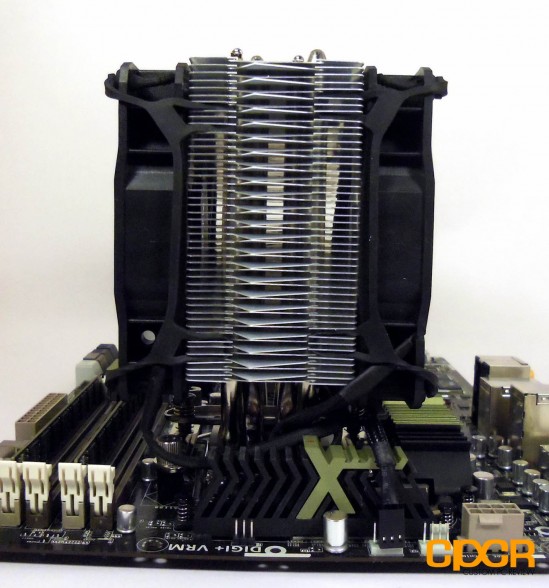 Once that’s done, you just need to strap your fans on and you’re good to go!

A Closer Look at the NXT Havik 140 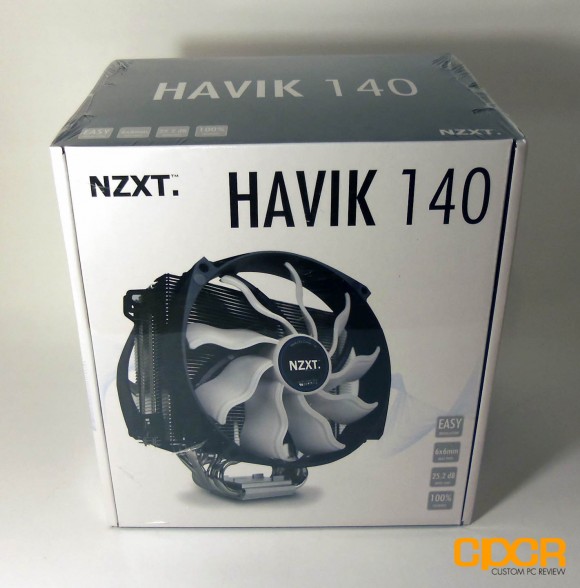 The front of our Havik 140 packaging is very similar to that of the Havik 120. It features a graphic of the cooler and then a few blurbs about the cooler. 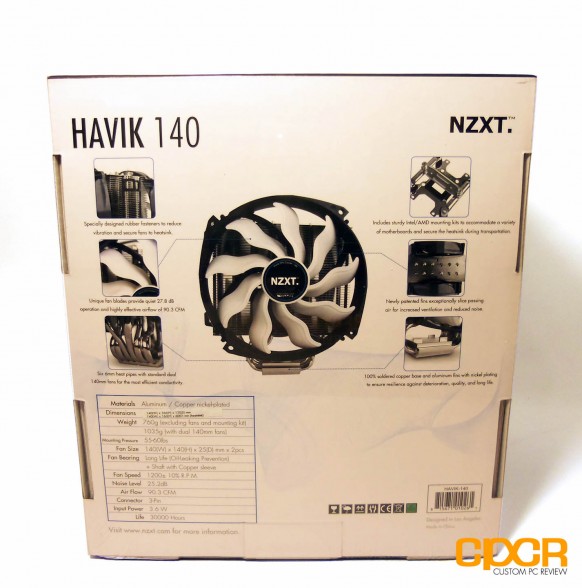 The back of the packaging is again a lot like the Havik 120. It shows the full specifications as well as a few shots of the heatpipes, and the mounting system. 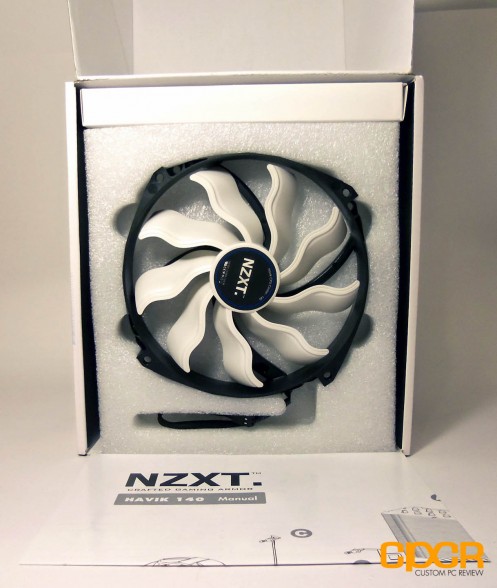 Upon opening the box, we were greeted with one of our 140mm fans, as well as the mounting guide and manual. 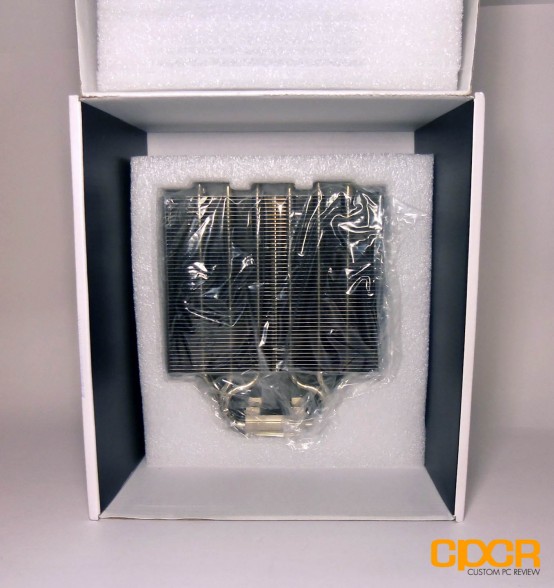 With the fans removed, we get a glimpse of the cooler, which is seated in some nice, protective closed cell foam. 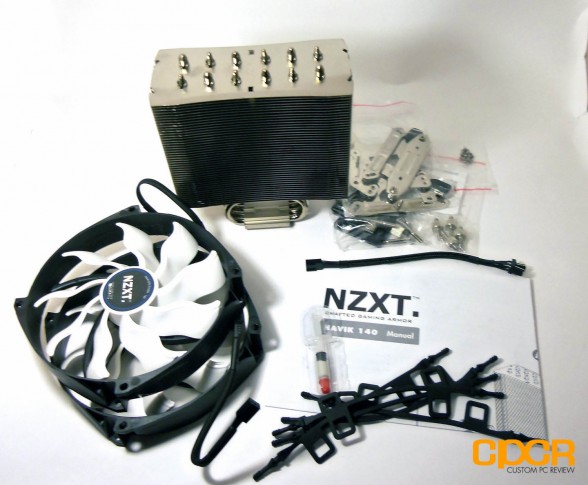 With everything pulled out, here’s what we got. Two 140mm fans, the needed mounting hardware for the cooler, a 4 pin to 3 pin adapter, a manual, the cooler itself, and a small tube of thermal paste. 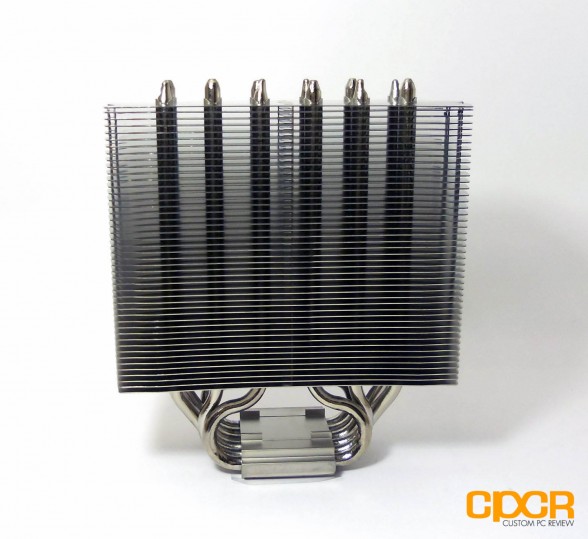 Here we can see the front of the cooler, it features aluminum fins which are soldered to the six 6mm heat pipes for maximum cooling efficiency. 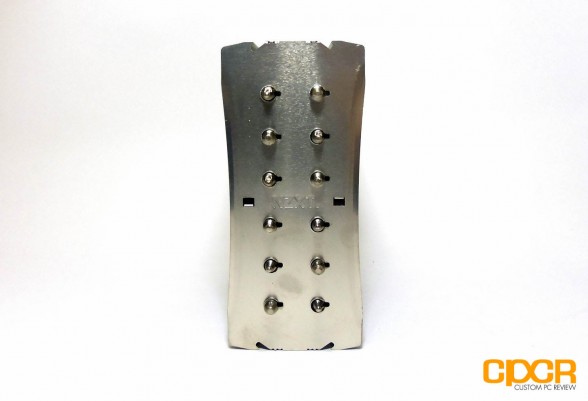 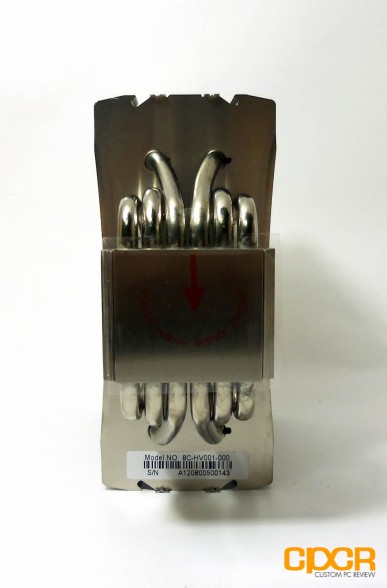 Installing the Havik 140 is identical to the Havik 120, but I’ve decided I’d briefly outline the steps one more time. 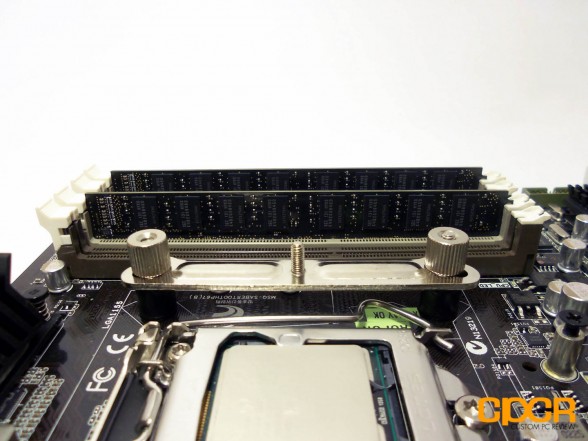 First things first, you want to get your backplate on and your mounting arms screwed down. 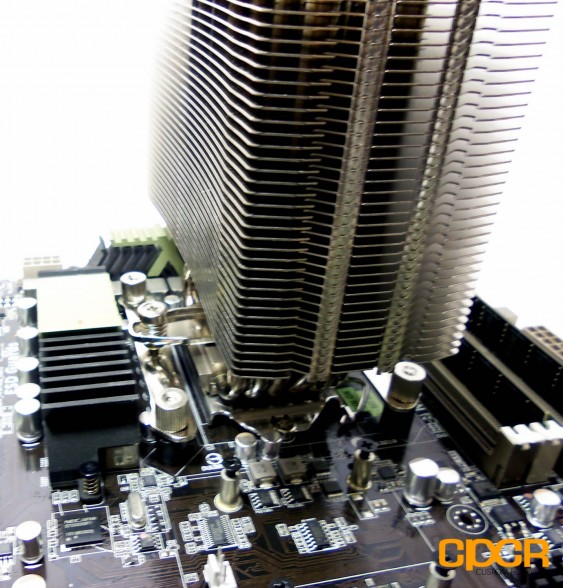 Then you simply screw the cooler down onto your mounting arms 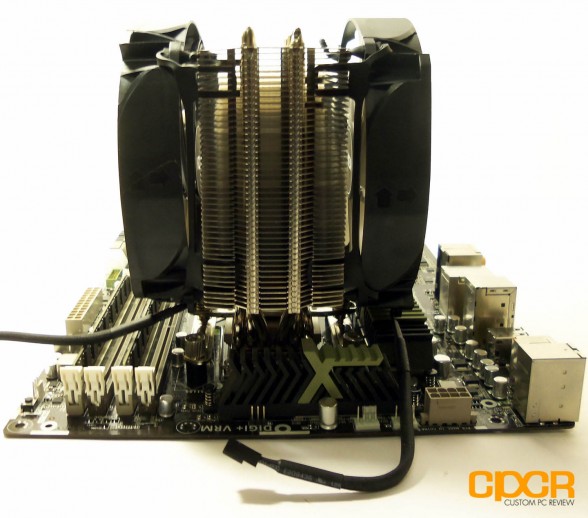 Once your fans are installed you’re good to go! 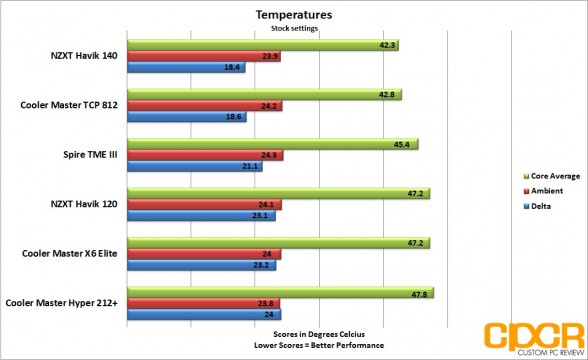 Taking a look at the performance of the two coolers on stock clocks, we can see that the NZXT Havik 120 was easily able to beat our favorite $25 budget cooler, the Cooler Master Hyper 212+. It was even able to barely out perform Cooler Master’s X6 Elite as well which features six 6mm heatpipes.

The Havik 140 on the other hand was able to out perform everything on our charts. It would appear as though the combination of the additional heat pipes along with the larger fans really pushed the Havik 140 ahead of the pack. 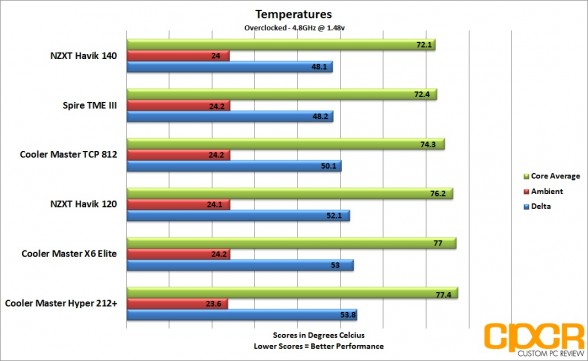 Overclocked results however, is what most of you came to see, so here I’ve overclocked the test system to a fairly high 4.8GHz. The Havik 120 was again able to beat the ever so popular Hyper 212+, this time by almost two degrees Celsius!

The Havik 140 on the other hand also performed exceptionally well defeating all other coolers included in our testing today. It also barely skimmed past the Spire TME III, which features smaller 120mm fans, beating it by just 0.1°C. It’s within the margin of error, but nevertheless it has taken it’s place as the number one cooler on our charts today.

Both the Havik 120 and the Havik 140 exceeded my expectations. Out of the gate, I was expecting them to perform well, but not nearly as well as they did. Performance wise, the Havik 140 was able to top my charts, becoming the best CPU cooler I’ve tested to date, just slightly above the Spire TME III, which had the advantage of five 8mm heatpipes. The Havik 120 on the other hand, while it wasn’t able to match the performance of the Spire TME III, was able to defeat the Cooler Master X6 Elite as well as the Cooler Master Hyper 212+, two very strong competitors.

Aesthetically, the Havik series of coolers happen to look quite nice. They have that clean look to them that would fit in nearly any situation. The black fan shrouds with white blades adds just a nice bit of touch and makes them pop. I do however wish there was perhaps something more to make them stand apart from each other. Sure there is the obvious difference in the fan size, but I’m sure they could have made a couple other subtle tweaks to make the Havik 140 look just a little more aggressive.

The installation process on the Havik series of coolers was pretty straightforward. Most coolers on the market have now transitioned into an installation procedure very similar to that of the Havik coolers. Simply bolting on your backplate, then screwing on your mounting arms and finally screwing the cooler down can be achieved in just a matter of minutes. The fan mounting however proved to be a bit more difficult. There weren’t any clear directions on my manual so I had to try my best to figure out a way to put them on. Unfortunately, it did take a while to figure out; however, once they were finally installed and ready to go, they performed very well and were fairly quiet as well.

The NZXT Havik 120 is a solid product with excellent build quality and overall performance on par with other coolers at the price point.

The NZXT Havik 140 proved to be the best air cooler that I’ve tested to date. It was able to out perform coolers that are more expensive, and it does so at a very low price point. Highly recommended!