Holding Infinity in the Palm of Your Hand 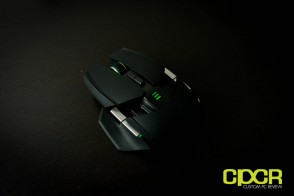 You gotta admit. Razer is one helluva an awesome engineering company. They make fantastic, forward thinking gaming mice, keyboards, headsets, and lately even top of the line gaming notebooks, but one thing they haven’t seemed to figure out is logistics. Time and time again Razer unleashes possibly the coolest, most groundbreaking new products for consumers just to find that whatever just got released is sold out within minutes of the pre-order button becoming available.

One such product, which we’re about to review today, is the Razer Ouroboros. The Razer Ouroboros is a gaming mouse released back in late 2012, nearly 1 year ago, and despite being introduced so long ago, Razer hasn’t done a very good job of keeping it on shelves since up until recently, it hasn’t been something that’s been readily available for purchase. Why’s it so difficult to find? Well, that’s a question for Razer, but let’s go ahead and talk about the features of the new mouse to shed some light on why people are picking these things up faster than Razer can produce them.

The Razer Ouroboros, along with the Razer Mamba, will sit up top on the Razer lineup as the flagship wireless gaming mice in Razer’s stable of gaming mice. Along with its cool design, the Ouroboros features a modular and adjustable design, which allows users to swap out sidepanels and adjust the length and angle of the palm rest. Additionally, it also features Razer’s latest 4G laser sensor capable of up to 8,200 DPI as well as the ability to operate in both wired and wireless modes.

Ready to see how it stacks up? Let’s take a look!

A Closer Look at the Razer Ouroboros 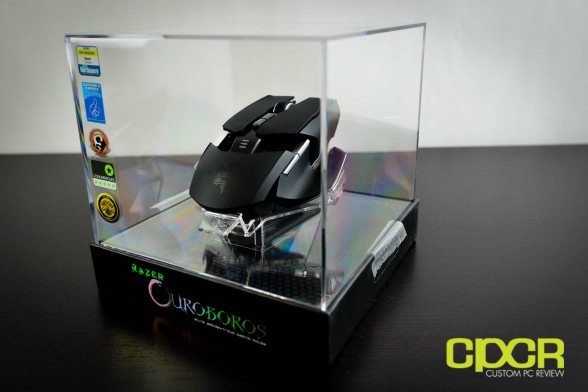 Razer is always known for their exceptionally well crafted packaging. As you can see above, the flagship Razer Ouroboros is no exception. 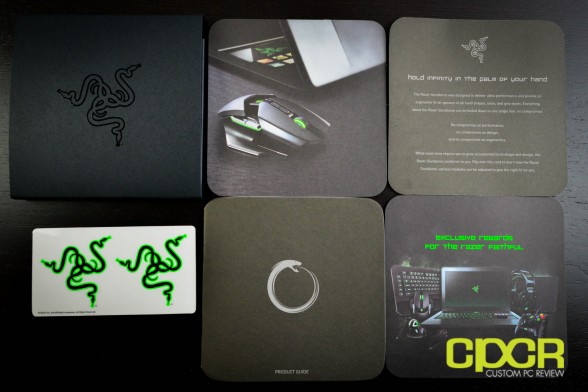 Opening the box up, let’s take a look at the accessories first. As usual, we get the Razer package of documentation… 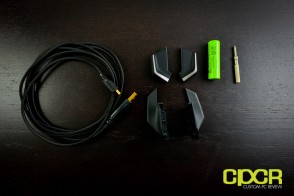 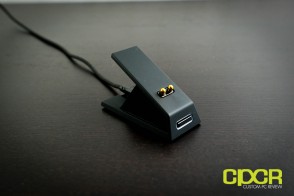 …a USB cord, 2 pairs of modular sidepanels (one with plastic wings and the other with rubber grips), a 2500mAh, 1.2v, NiMH battery from GP, and a small adjustment screwdriver. There’s also a docking station for the Ouroboros which also functions as a charging station as well. Unfortunately with all this stuff, Razer didn’t include any sort of case or carrying pouch for the accessories. 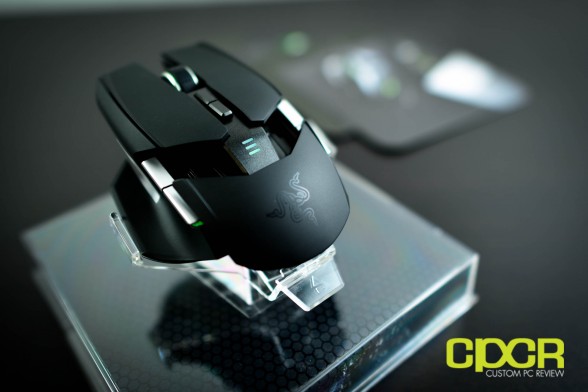 Finally, there’s also the Ouroboros itself, which sits on a throne, giving the mouse the effect of it levitating within the packaging. Pretty neat. 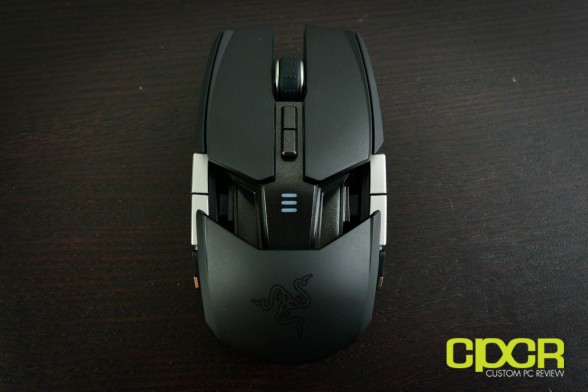 Taking a closer look at the Ouroboros, we can see that it borrows heavily from the design of the Razer Taipan with a similar ambidextrous design. The unit itself has two sidebuttons on either side of the mouse making a total of four sidebuttons, left and right click buttons, a scroll wheel, along with two more sensitivity adjustment buttons in the center of the mouse. The entire mouse is constructed of plastic coated in matte finish. 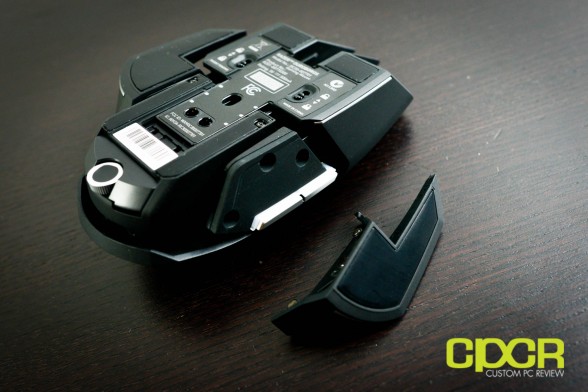 The design of the Ouroboros allows it to be customized to the user’s preference. The wing sidepanels on the side may be removed and replaced with rubber sidepanels, which allow for better grip. 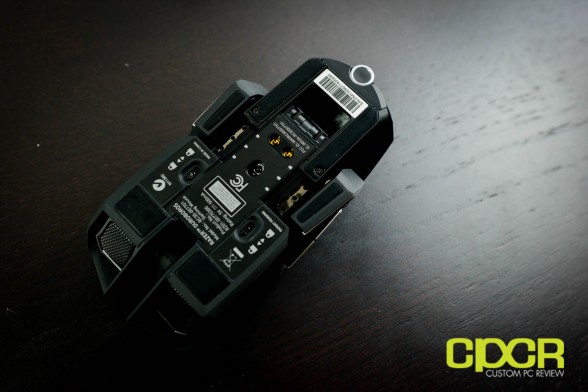 Taking a look at the bottom of the Ouroboros, we can see that Razer has dropped in a ton of Teflon feet, which help the heavy mouse glide on all types of surfaces. In the center we get the Razer 4G laser sensor, which is Razer’s marketing speak for the Avago ADNS-9818, the same sensor found on the Razer Taipan. Around the sensor there’s two switches that allow the user to enable/disable the side buttons. Right under the sensor, there’s also two holes here with metal connectors that connect to the base station when charging the battery on the mouse. 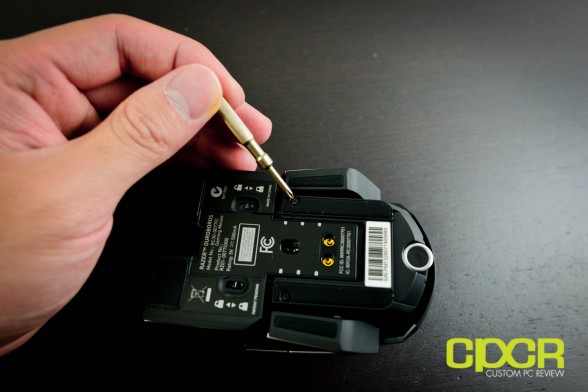 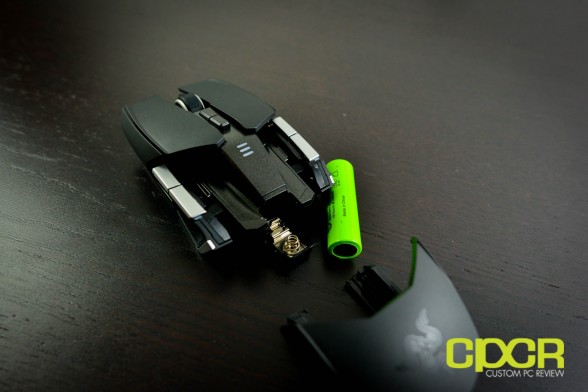 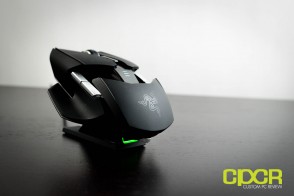 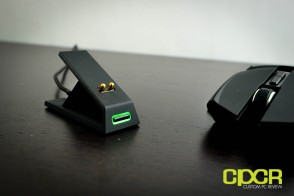 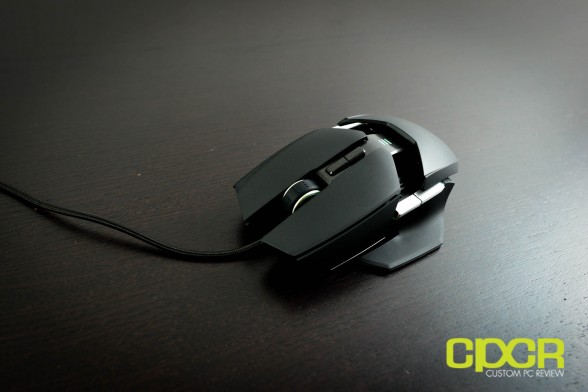 As such, you’ll probably run out of battery at some point, so the Ouroboros also has the ability to operate via a wired connection. Unfortunately, this defeats the purpose of a wireless mouse, but it’s nice to have the ability to connect with a wire in a pinch. 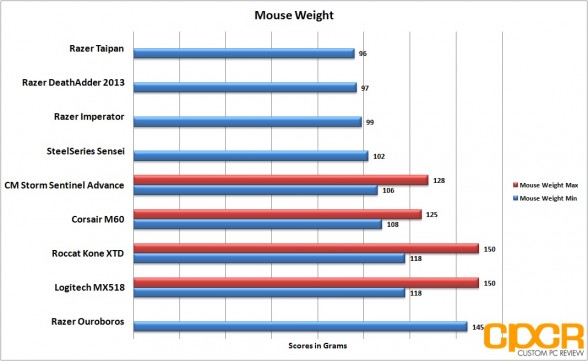 As the Ouroboros is a wireless mouse, it’s extremely heavy weighing in at 145g with the battery installed, nearly coming in as heavy as the Roccat Kone XTD and the Logitech MX518 with all the weights in their respective weight systems installed. 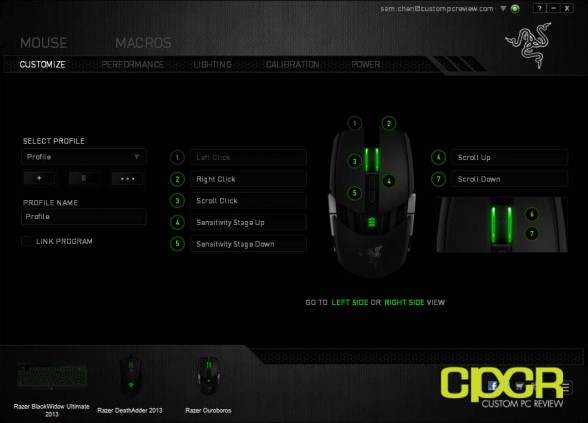 Surprise surprise the Ouroboros uses the Razer Synapse 2.0 software! Razer doesn’t include an install disk for the software so you’ll have to swing by the Razer website to download the latest version of the software.

Here’s a look at the customize tab. Here you can assign macros, disable buttons, etc. just like any other Synapse 2.0 supported product. 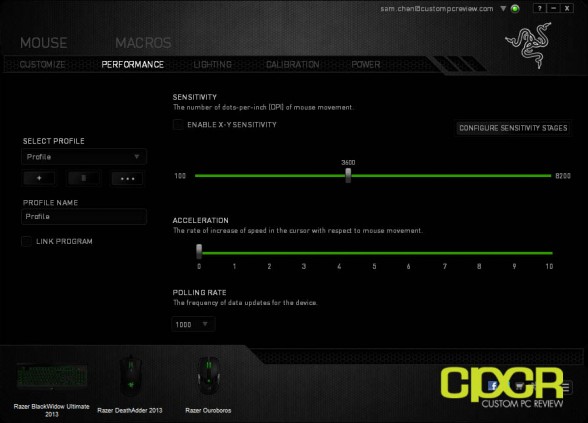 The second tab here is the performance tab, which allows adjustment of sensitivity as well as mouse acceleration and polling rate. The Ouroboros can be adjusted from 100 DPI to a maximum of 8200 DPI. Up to 5 sensitivity stages can be configured. 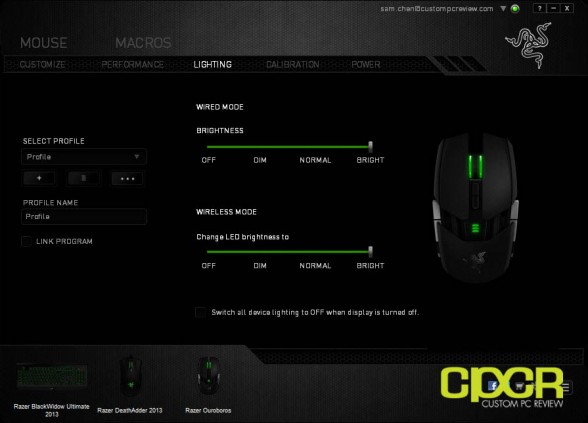 The Ouroboros has LED indicators on the scroll wheel, the center battery indicator, and the side buttons. The LEDs intensity can be adjusted via the lighting menu. 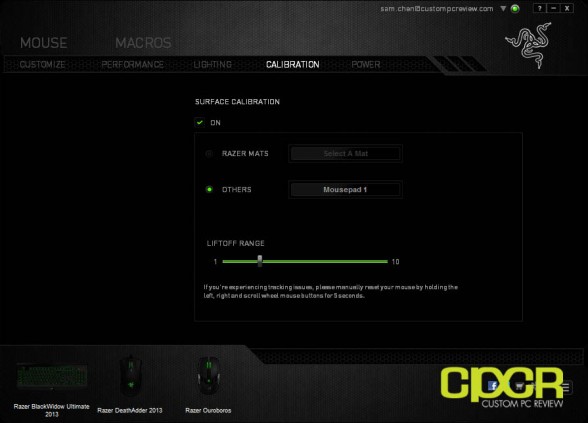 As usual we also get a calibration tab, which allows surface calibration of any mousepad or simply selecting of any Razer branded mousepads. Here we can also adjust the liftoff range as well. 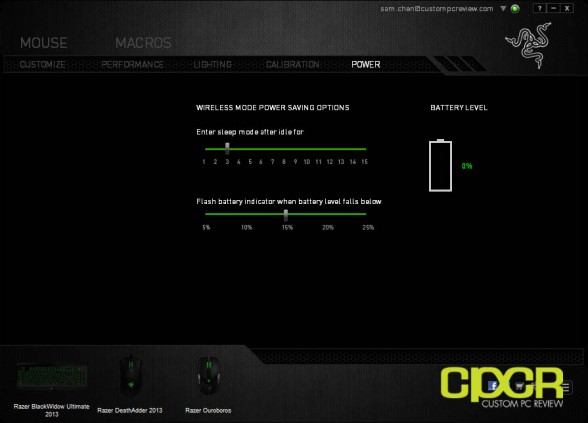 Finally, we also have the power tab, which has a number of features designed for wireless mice. Here we can adjust when the mouse goes to sleep after being idle, when to flash the battery indicator when the battery is low, and a battery level indicator as well. Unfortunately, the battery level indicator constantly remained at 0% over the course of testing (using the included GP battery as well as Sanyo Eneloop batteries), so I’m not sure if that’s a working feature. 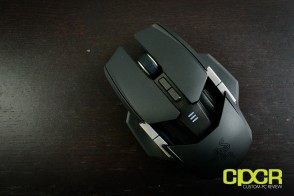 After plugging in the dock for the Razer Ouroboros, the mouse instantly connected without any issues. Since I use numerous other Razer products, I already had the Razer Synapse 2.0 software installed and the software instantly detected the Ouroboros and proceeded to update all the drivers necessary for the mouse.

Over the course of testing the Ouroboros, I spent numerous hours playing the newly released Payday 2 along with some League of Legends. In both games the mouse functioned without any issues. Tracking is decent and the 4G laser system (Avago ADNS-S9818) doesn’t seem to have any issues with Z-axis hopping that was a big problem with the Phillips Twin Eye sensors. When switching between the wired DeathAdder and the Ouroboros (both of which are connected side by side) I did notice some slight lag with the Ouroboros. For League of Legends and general computer use it wasn’t much of an issue, but for sniping in Payday 2 as well as in other FPS games, I found this quite inconvenient as it made it far more difficult to aim accurately with a scope.

As for comfort, Razer advertises the Ouroboros to be a mouse that works with palm, claw, and fingertip grip. While Razer allows adjustment of the palmrest and swappable sidepanels to meet the needs of the different grips, in practice I found the Ouroboros to be only decent in comfort and utility. For palm grippers, the Ouroboros doesn’t have the oversized arched back found on palm grip oriented mice such as the DeathAdder. While this didn’t cause any pain, it does cause your hand to become fatigued sooner in comparison to using mice designed for palm grippers. On the other hand, claw grip and fingertip grip didn’t have the same issues; however, the Ouroboros being a wireless mouse is quite large and quite heavy. Because of this, moving the mouse around using the claw or fingertip grip is a bit more difficult compared to even the similarly designed Razer Taipan, which weighs in at only 96g (vs 145g for the Razer Ouroboros).

Here’s a look at prediction and jitter testing throughout various sensitivity ranges on the Ouroboros. The Avago ADNS-9818 is decent with no jitter and only small amounts of prediction present. 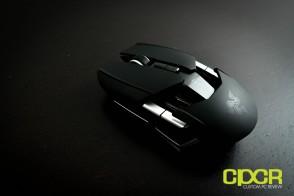 With testing out of the way, I think the best way to describe the Razer Ouroboros is that it’s a Jack of all trades, but a mater of none. The Ouroboros is certainly a hit in some areas, but it does come with a significant number of misses as well. I’m going to start by saying that hands down the Ouroboros is one of the most beautiful gaming mice on the market today. Its futuristic, sleek appearance has pretty much received compliments from everyone who laid eyes on it during my testing. Material choices are fantastic here as well since Razer has stuck with the same fingerprint and dirt resistant matte black finish found on all their latest creations.

Design wise, I felt like the Ouroboros sounded extremely good on paper especially with the mouse touting all the adjustment options, but after testing, I’d have to say that its design does leave a lot of things to be desired. For palm grippers, the back of the Ouroboros where the palm rests sits a bit too low to the table, which is similar to the design of the Taipan, but since I’ve been using the DeathAdder as my main mouse for some time now, the Ouroboros didn’t feel quite as good as the DeathAdder as a palm grip mouse despite having all the adjustments options available. In finger and claw grip, the Ouroboros wasn’t too bad in terms of ergonomics, especially with the rubber sidegrips installed, but given that it weighs nearly 145g, it’s far too heavy to be used as a good claw or fingertip grip mouse.

Sensor performance is decent as expected from Razer’s 8200dpi 4G laser system (Avago ADNS-9800), which we’ve become quite familiar with. Accuracy is good although there is apparent negative and positive acceleration present. Those who demand the absolute best accuracy I’d recommend going with something that uses Avago’s optical sensor such as the DeathAdder. During testing I also noticed some slight lag as well  when compared to the DeathAdder. It’s a very small amount of lag, but having both the DeathAdder and the Ouroboros connected and using them side by side, it was quite noticeable.

Battery performance on the Ouroboros was rated at about 12 hours of continuous gaming, and during testing I’d say it was more around 8 hours of continuous battery life (the mouse does go into a low power standby mode when not in use). The Ouroboros uses standard AA batteries so they’re quite readily available and you can simply swap them out when they run out, but unfortunately unlike other wireless mice out there, taking the battery out of the Ouroboros does require unscrewing two small screws on the bottom that allow the adjustment of the palm rest. Since the screws are not tool-less, this means that you won’t be able to quickly hotswap the battery in the event it runs out of power mid game. You can however pull the USB connector from the dock and use the Ouroboros in wired mode, but it does require the mouse to be redetected by the PC, so in the event your mouse runs out of battery in-game, you’ll be out of commission for at least a minute or two. 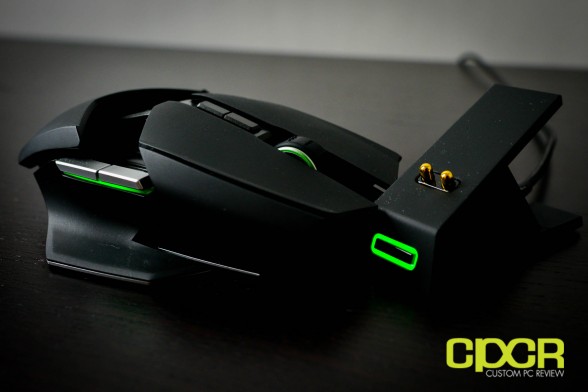 Pricing on the Razer Ouroboros is currently $149.99, which makes it one of the most expensive gaming mice on the planet. While it’s not uncommon for high end wireless gaming mice to be priced at $120+ such as the Mad Catz R.A.T. 9 priced at around $123, I feel like $150 for a plastic mouse is way too much to ask. Maybe $100, but $150 seems like a stretch. If you absolutely love the Ouroboros design, you really like wireless and you have the money to spare, the Ouroboros isn’t bad. However, for the money I’d rather buy a 2013 Razer DeathAdder or a Razer Taipan and deal with the “inconvenience” of being wired instead.