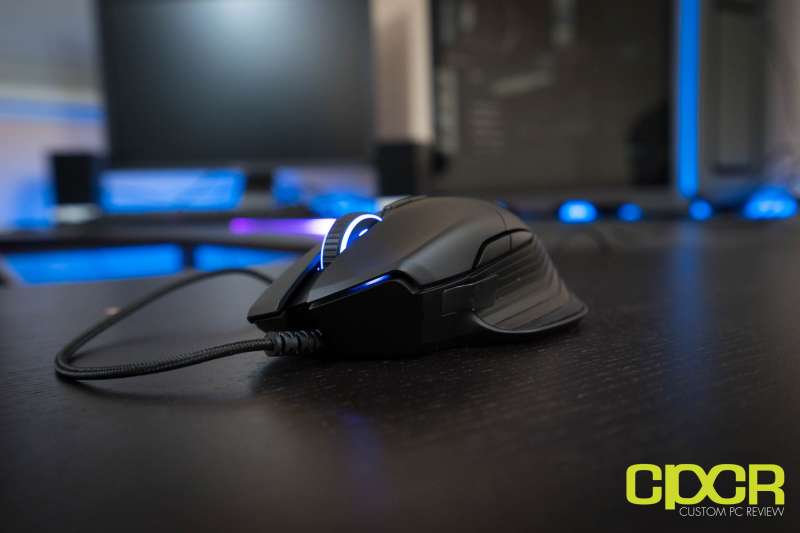 First Person Shooter, or FPS, games are one of the most common gaming genres out there, but when it comes to gaming mice designed specifically for the genre, there is surprisingly very few out there. Of course, if you ask any professional FPS gamer, it’s easy to understand why. As FPS gaming relies almost solely on the quality of the main switches along with the accuracy of the sensor, FPS gamers typically select simple mice with quality switches and ultra-accurate sensors making gaming mice such as the Zowie EC2, Razer DeathAdder Elite, Logitech G Pro, or SteelSeries Rival 300 some of the most popular gaming mice for FPS gamers.

Of course, Razer isn’t a company that would be satisfied with simply crafting a great back to basics style of mouse. Being one of the most innovative gaming mice companies, Razer recently launched the Basilisk FPS gaming mouse, a new gaming mouse which we’ll be reviewing today. What makes the Basilisk different is that it’s the first Razer mouse designed specifically for FPS gamers. Unlike typical gaming mice, the Razer Basilisk features not only a top notch gaming grade optical sensor and Omron switches, but it also features several additional features such as a sensitivity clutch button and a scroll wheel resistance adjustment for those who want to configure the absolute perfect level of scroll wheel resistance.

Before we begin, let’s first analyze the specifications. Here we can see that the Razer Basilisk is pretty much what you’d expect from Razer’s premium gaming mouse lineup. The sensor onboard is Razer’s 5G Optical sensor (Pixart PMW3389), which is the same sensor you’d find on the Razer DeathAdder Elite. Switches onboard are the Omron 50 million click switches which are upgraded versions of the Omron 10 million click switches which have long been considered the gold standard in gaming mice switches. 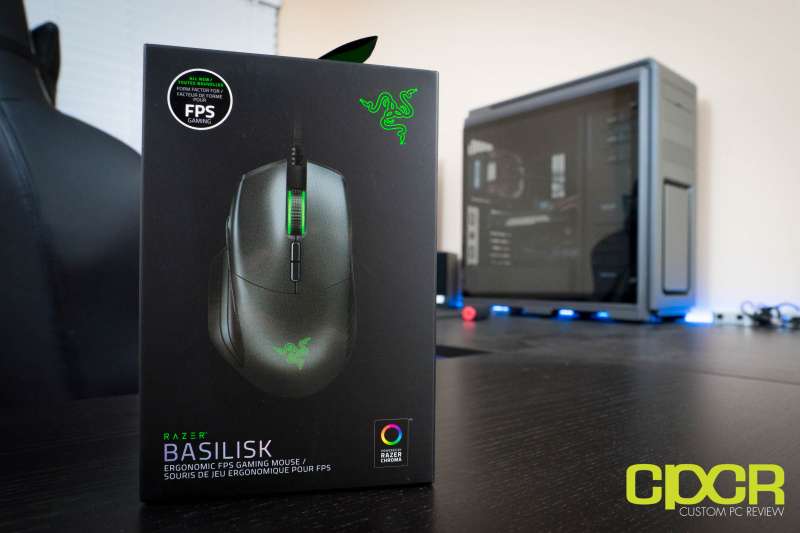 Here’s a look at the packaging for the Razer Basilisk. 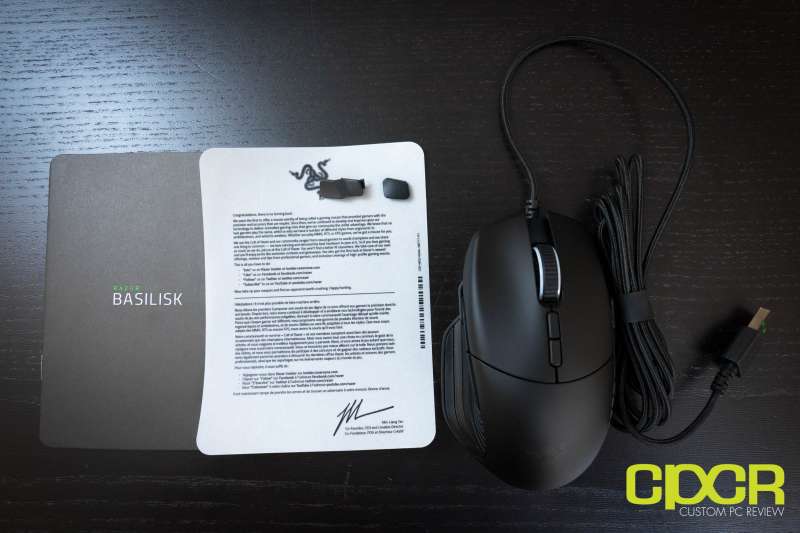 As usual, we get all the premium Razer packaging we’re all too familiar with. Included is some documentation, the Razer Basilisk and some accessories. 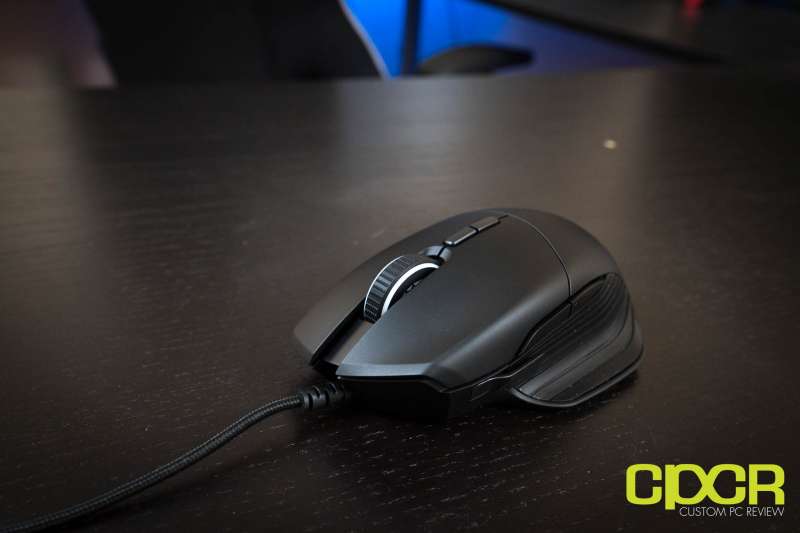 Here’s a look at the Razer Basilisk. The Razer Basilisk features a right handed design and while it appears to be a palm grip mouse, it’s actually somewhere between a palm grip mouse and a claw grip mouse. While it’s not as wide as something like the DeathAdder Elite, it isn’t as narrow as a the Lancehead TE. As usual for Razer, both the left and right side of the mouse features a textured rubber material for enhanced grip. Once plugged in, the scroll wheel and back light up from embedded Chroma RGB LEDS. 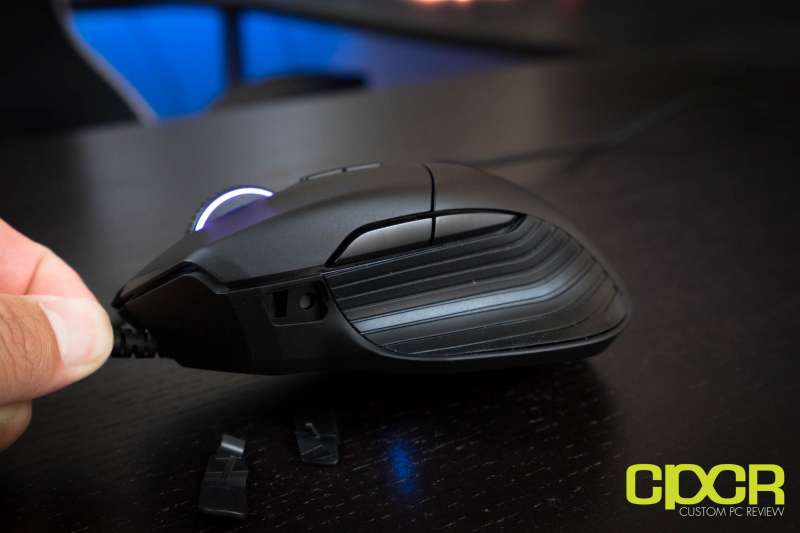 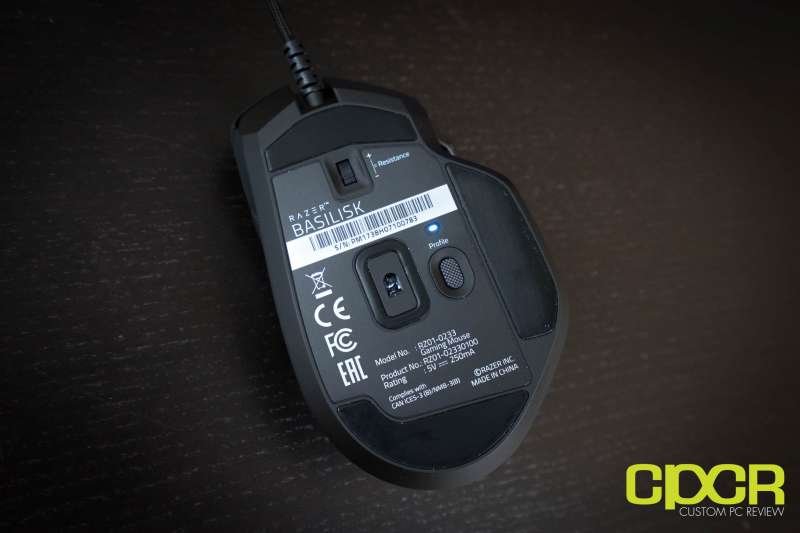 At the bottom of the mouse is three large Teflon feet along with another smaller circular one near the sensor. Additionally, the Basilisk has a profile button which can cycle through up to four on-board profiles along with a scroll wheel resistance knob that can adjust the resistance of the scroll wheel from no resistance to a significant amount of resistance. 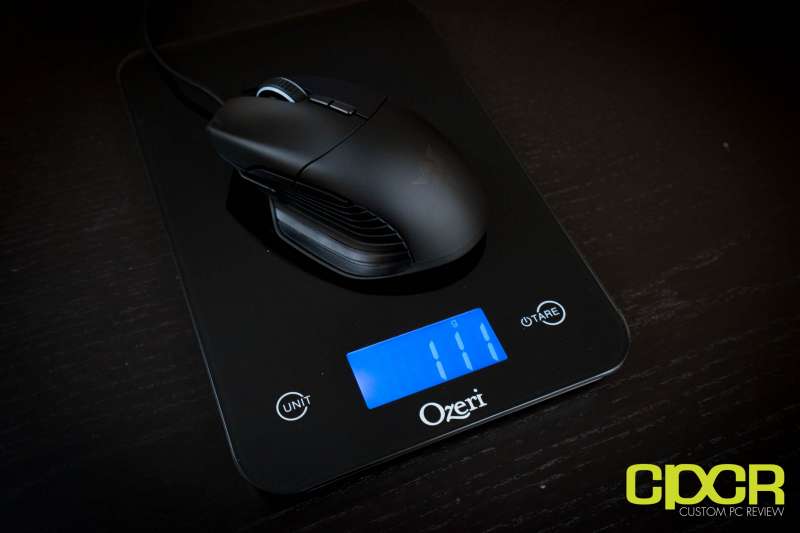 For a gaming mouse designed for FPS games, the Razer Basilisk is surprisingly heavy, weighing in at 111g. 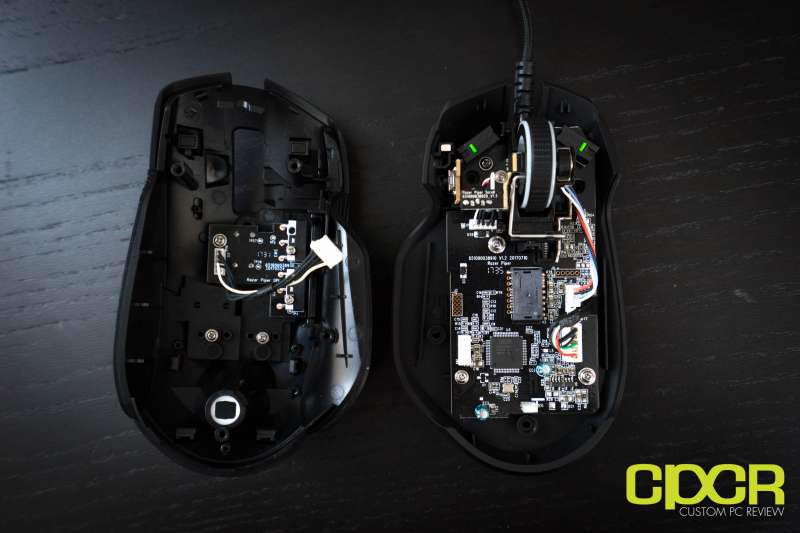 Here’s a look at the internals. 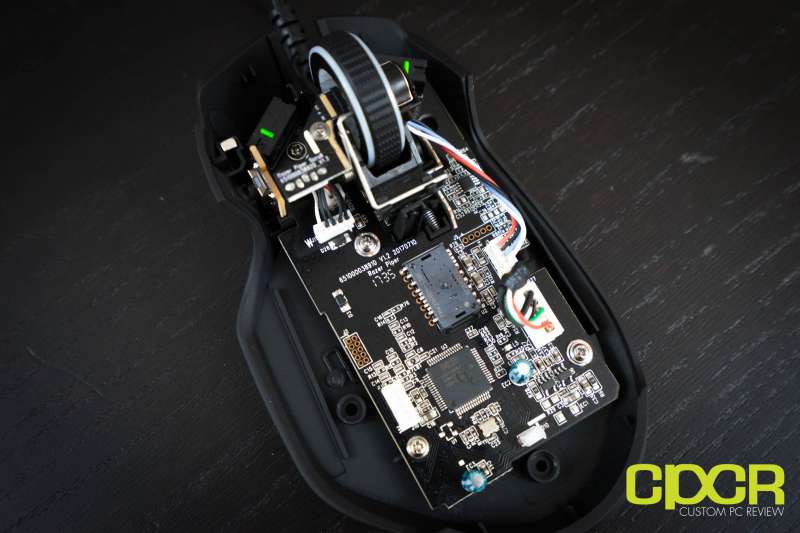 Here’s a look at the main PCB. According to the PCB, the internal project name for the Basilisk is Razer Piper. 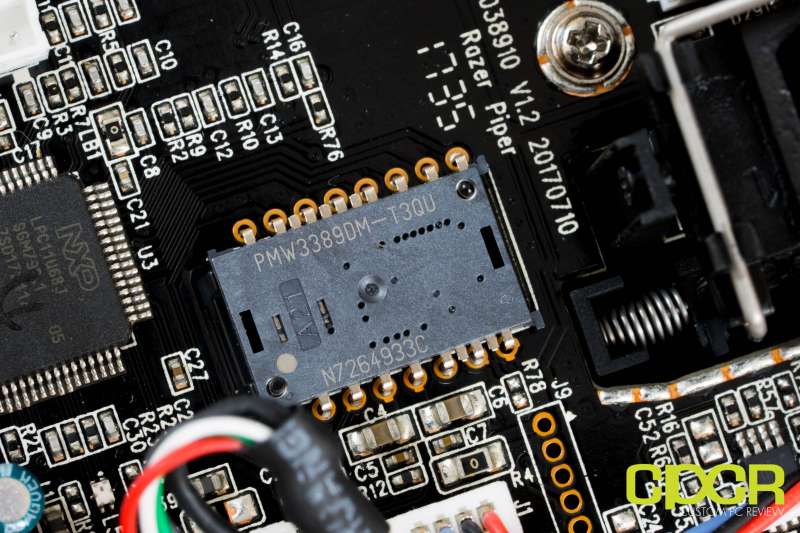 Here’s a look at the sensor. For the Basilisk, Razer is using the familiar Razer 5G Optical sensor, which is a Pixart PMW3389. This sensor is a co-developed sensor by Razer and Pixart and is capable of up to 16,000 DPI. 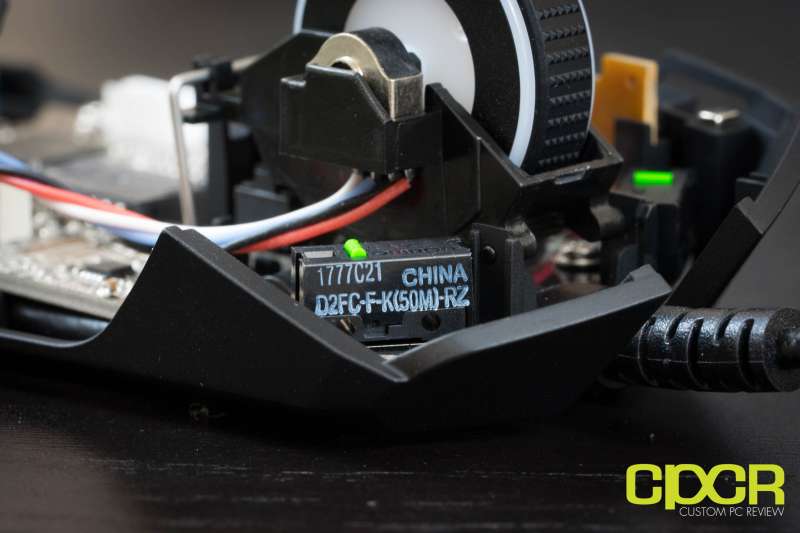 Here’s a look at the primary left/right click switches. These are the same Razer and Omron switches we’ve seen in all of Razer’s more recent gaming mice. The model number for these is D2FC-F-K(50M)-RZ. As its model number implies, these switches are rated for up to 50 million clicks and as with most components these days, they’re manufactured in China. 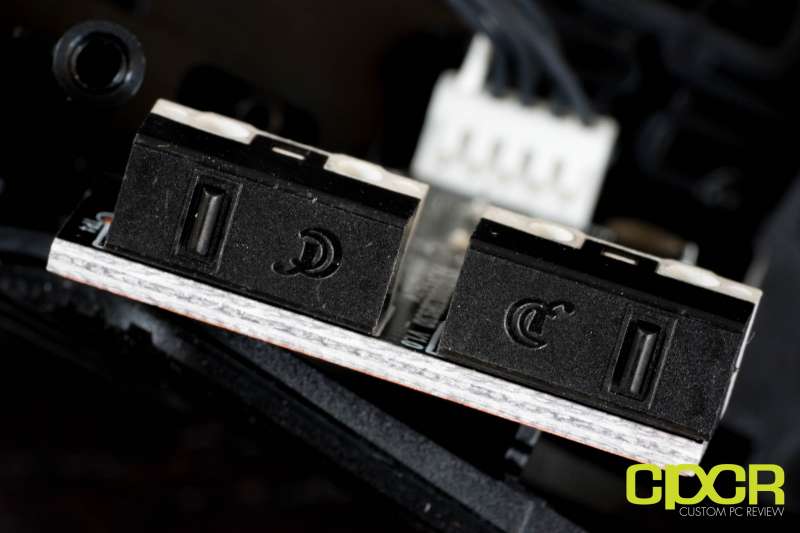 As we’ve seen before, the side buttons is manufactured by Chinese company ChangFeng (长风). These are relatively unknown switches, but have a stiffer and louder click than the primary Omron switches. 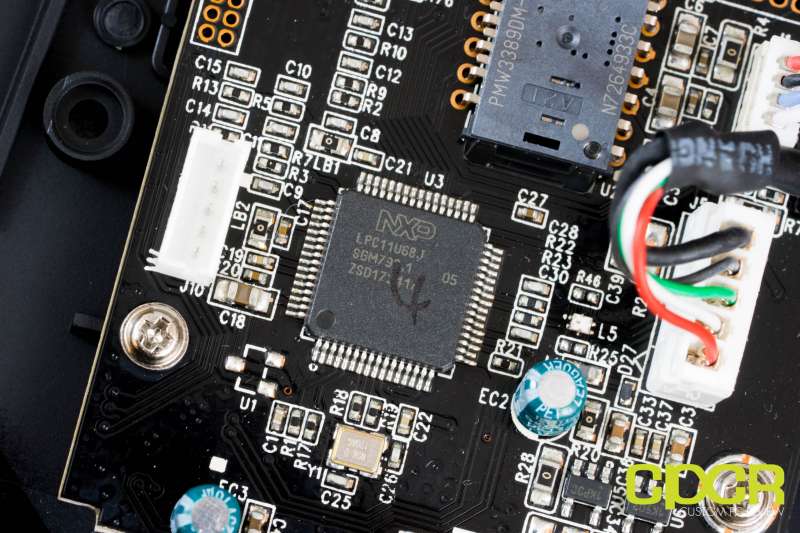 The Razer Basilisk utilizes the newer Razer Synapse 3.0. Synapse 3.0 is still in its beta stage, but functionality is complete for the most part. 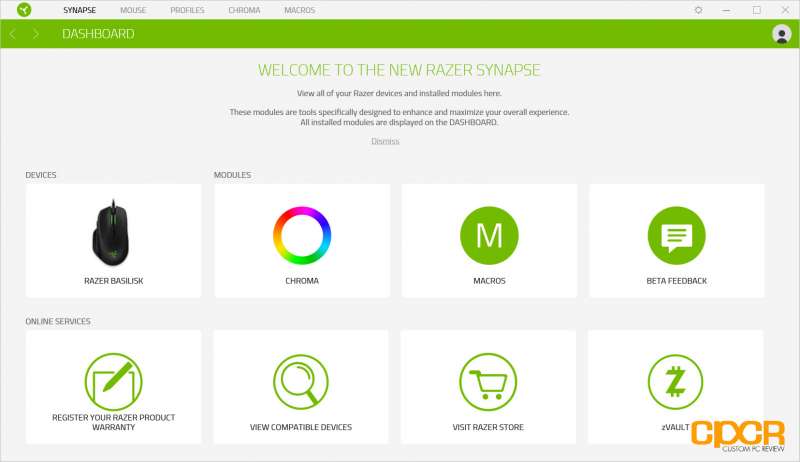 Here’s a look at the main menu for the Razer Synapse 3.0. The interface doesn’t appear to be completely ready at this point, but the main menu gives quick access to all devices, modules, and online services offered right in a convenient unified system. 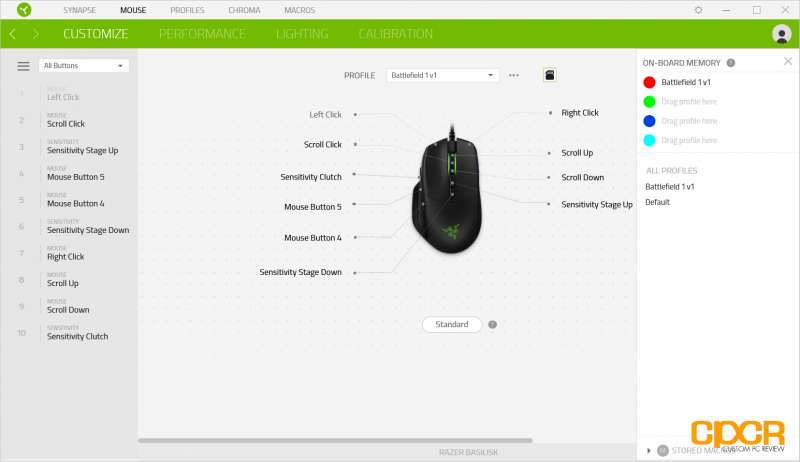 Clicking on the Razer Basilisk brings up the device’s settings. On the main page is the ability to program all the individual buttons on the mouse along with the setup of profiles. In addition to essentially unlimited profiles stored on Razer Synapse, the Basilisk itself can also store up to four onboard profiles so that custom settings can be applied in situations where the Razer Synapse software is not installed. 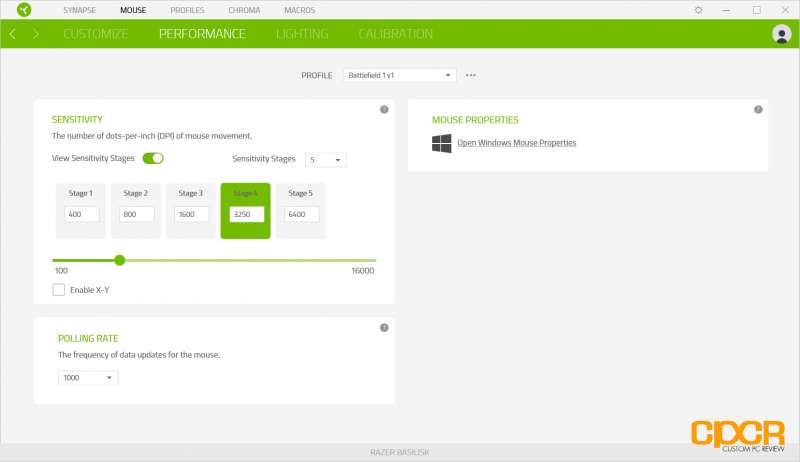 The Razer Basilisk features a very wide range of DPI options from 100DPI to 16,000DPI in 50DPI increments. There are up to five sensitivity stages for those who want to be able to quickly swap between the stages. The Basilisk also has a sensitivity clutch button which can change the sensitivity as the button is pressed, but this is setup in the mouse’s button customization page.

Those who want independent X and Y DPI settings can adjust them independently as well. For additional customization, the polling rate can also be changed between 125, 500, and 1000Hz. 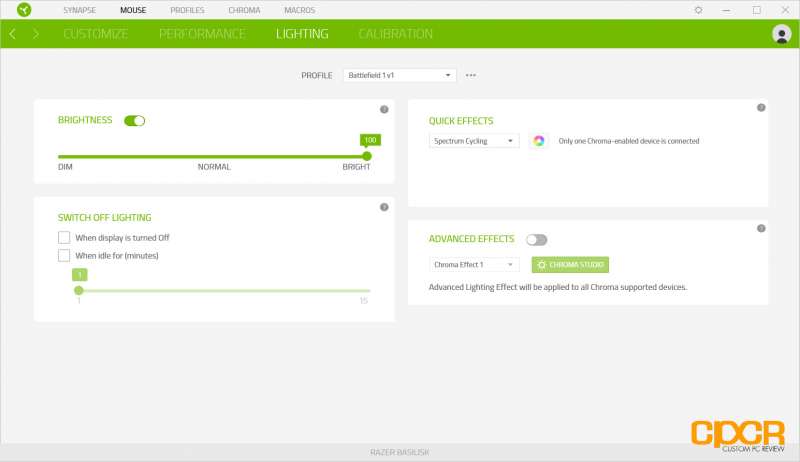 Of course there’s also the usual Razer Chroma RGB backlighting settings we’ve come to know and love. In Synapse 3.0, Synapse can be configured via the usual preset effects, or you can program a custom effect in Chroma Studio. 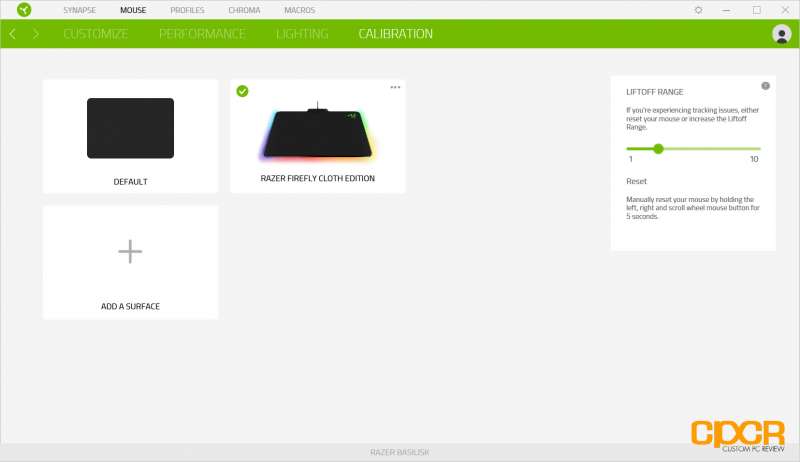 Finally there’s also the calibration tab which calibrates the mouse to the mousepad. Those who own Razer mousepads can just select it from a menu while those who own a different mousepad can perform a custom calibration on the mouse.

Testing the Razer Basilisk, the mouse performed very well as expected. Since the Basilisk is built on a platform that I’m fairly familiar with, this wasn’t too much of a surprise. Like the Razer DeathAdder Elite and the Razer Lancehead TE, the Razer Basilisk is a technically excellent mouse. During testing, I experienced little to no inherent sensor acceleration nor did I notice any other sensor issues.

As far as ergonomics are concerned, the Basilisk felt a bit like a hybrid between something for a palm and claw grippers. While it looks wide from pictures due to the thumb rest to the left side of the mouse, the actual mouse itself is relatively narrow. This makes the mouse’s shape ideal for players using a claw grip although it will feel a bit hefty. Palm grip users can use the Basilisk in their preferred grip style however, this won’t be as comfortable as wider mice such as the Razer DeathAdder Elite or the Mionix Naos 7000.

The two features which make the Basilisk unique for FPS gamers is the adjustable scroll wheel and the DPI clutch button, both of which I found to be very good additions to the mouse.

As for the sensitivity clutch button, it isn’t a new idea as we’ve seen it on numerous other mice from Corsair, Logitech, Roccat, and others, but it’s nice to see Razer finally add the functionality with their own twist as well. In testing, I found that Razer’s implementation on the Basilisk is well done as the decision to put the button close the front of the mouse allows for clawing the mouse without accidentally actuating the button, but still manages to make it easy to press by simply reaching forward. Razer also includes multiple sized buttons to suit different hand sizes.

Here’s a look at count/time results from Mousetester 1.5.3 when quickly swiping to the right at different sensitivity stages at 1000Hz polling rate.

As expected, there was no major tracking issues with the sensor.

Here are a few shapes I drew at different sensitivity stages to test for any jitter, prediction, angle snapping, drift control, etc.

Similarly, the Basilisk does not appear to suffer from any inherent jitter or prediction issues. 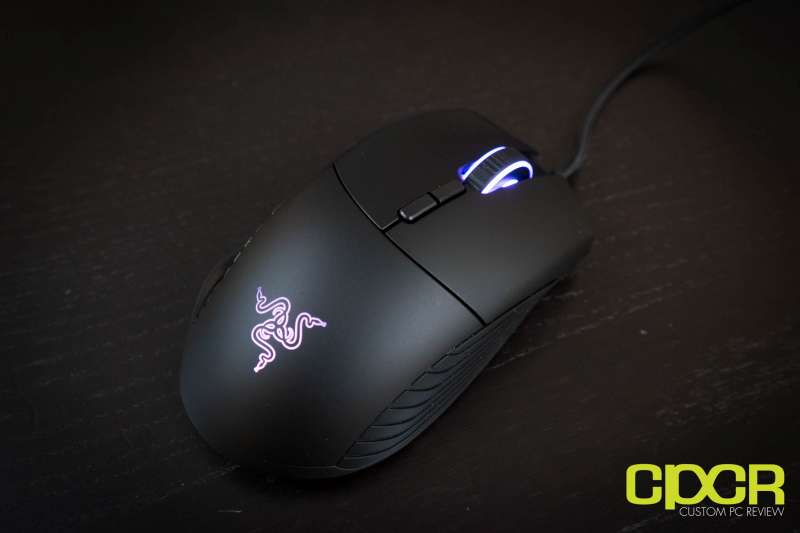 The Razer Basilisk is an excellent gaming mouse that incorporates Razer’s tried and true mouse-making formula with some innovative design features that make it stand out. In testing, I found the performance of the mouse to be excellent which wasn’t much of a surprise especially given Razer’s choice to pair the Pixart PMW3588 sensor along with Omron primary switches. The FPS oriented features are well implemented as well and having used the scroll wheel resistance functionality, I now personally believe it’s a feature that should be standard in every premium gaming mouse. The sensitivity clutch button while isn’t exactly new in the world of gaming mice is also a nice addition for Razer and players who need lower sensitivity for aiming will find this feature extremely useful in game.

While the Razer Basilisk is perfect for the most part, my only minor gripe with the mouse is with its design. It seems like Razer is attempting to cater towards both palm grip users and claw grip users which makes it kind of an in-between that isn’t perfect for either. From initial appearance, it looks like the mouse is a palm grip mouse with its tilted design and thumb rest area. However, for palm grip users I find that the narrow width and relatively low back of the Basilisk isn’t as comfortable as mice such as Razer’s own DeathAdder Elite. For claw grip users, the Basilisk is a perfect width for clawing however, the heavier weight and larger size in relative comparison to competing ambidextrous designs again unfortunately causes the Basilisk to fall short there as well. Luckily, those who find themselves switching between grip styles often and simply can’t find a mouse in the perfect middle of the road, the Basilisk may be just what you’re looking for.

The Razer Basilisk is priced at $69.99 which is reasonable for a premium wired gaming mouse. That said, this is the only Razer mouse you’d find with the scroll wheel resistance adjustment functionality along with a sensitivity clutch button, so if those are must have features for your next FPS gaming mouse, the Razer Basilisk easily justifies its pricetag.