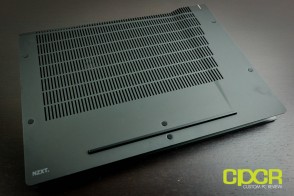 Laptops with high-performance components are great for gamers on the go and creative professionals, but high performance and dinky fans often means their temperatures can rise from 0°C to volcano in an blink of an eye. Excessive heat can not only damage the hardware, but can also make your hands very uncomfortable, not to mention the annoying fan whine.

Today, we’ll be reviewing the NZXT’s Cryo X60 notebook cooler. The Cryo X60 notebook cooler is equipped with two 120mm fans, four USB 2.0 ports, integrated fan speed control and an aluminum design that helps give it a polished style and increased durability. It offers the option to power the cooler by your laptop’s USB port or the dedicated AC adapter, making it perfect for users on the go or users who prefer who use their laptops as desktop replacements.

Ready to check it out? Let’s take a look!

A Closer Look at the NZXT Cryo X60 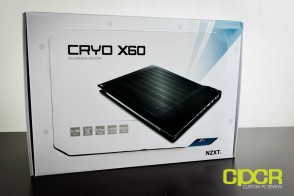 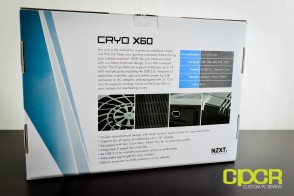 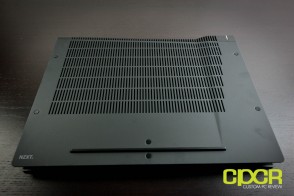 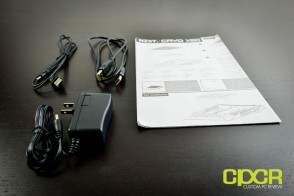 Here’s a look at the packaging for the NZXT Cryo X60. Included in the box we get the Cryo X60 notebook cooler itself, a USB 2.0 to USB 2.0 cable, a USB power cable, DC power adapter, and a users manual. 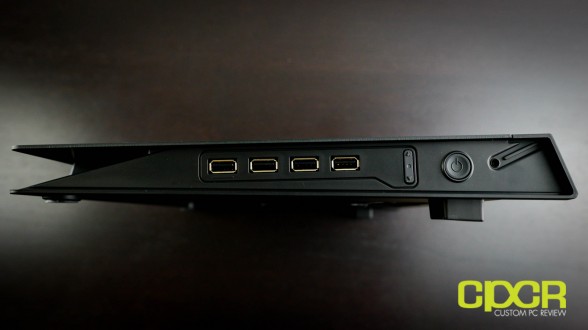 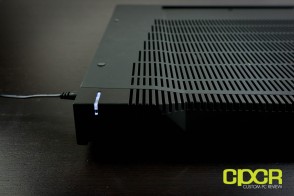 A few rubbery stubs prevent your laptop from sliding, but most laptops today come with some form of rubber feet, so it’s redundant. Users may experience their laptops sliding since some of the rubber stubs on the cooler are not the same height. At the top right of the unit, there’s a LED power indicator which indicates if the unit is connected to a power source. It will remain on regardless of the fan state. One thing you’ll notice is the asymmetrical design – there’s a small indention near the right side of the cooler. This creates a small gap between the cooler and the bottom of the laptop, which helps improve airflow. 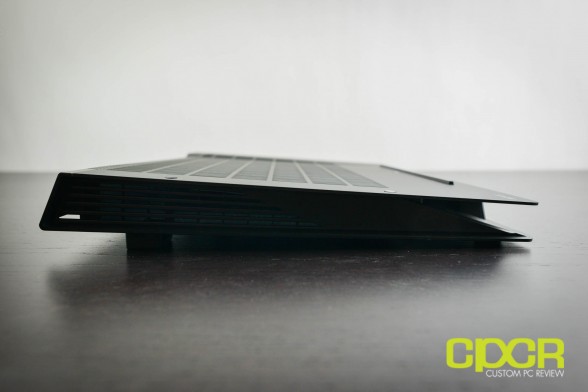 Here’s a look at the left side of the cooler. There’s not much going on here, so let’s move on. 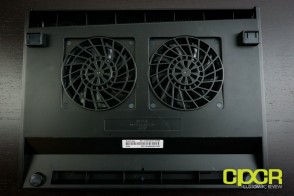 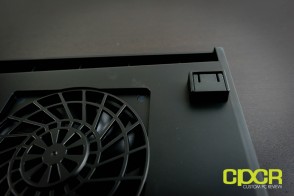 Here’s a look at the bottom of the Cryo X60. There’s a couple rubber feet near the front of the cooler, which help improve grippiness. Near the back of the unit there are two retractable feet which help increase airflow by raising the cooler by 2 cm. Unfortunately, the feet are not coated with rubber, which does allow for some movement. Whereas the top of the unit is constructed of aluminum, the fans and bottom components are unfortunately constructed of plastic. 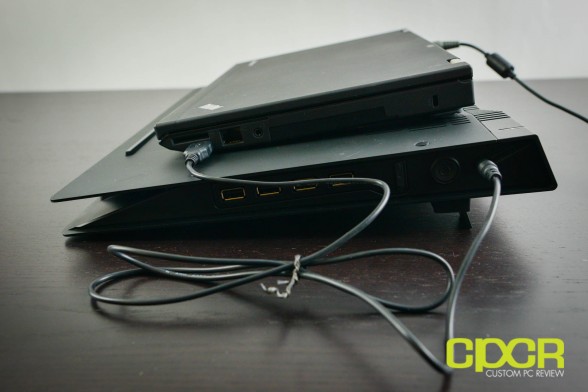 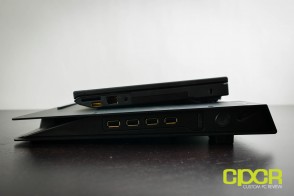 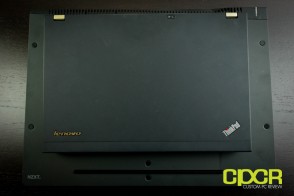 Here’s a look at the Cryo X60 with our Lenovo Thinkpad X220 test system installed on top. The Cryo X60 is clearly built for larger notebooks such as 15″ or 17″ gaming notebooks or workstations.

For our testing today, we’ll be taking a number of different temperatures both with and without the NZXT Cryo X60. Load testing will be conducted with a 30 minute run of Prime95 in blend mode to generate the maximum amount of heat possible. All tests utilizing the Cryo X60 will be run with the fans running at 100%. All temperatures will be recorded with HWMonitor. 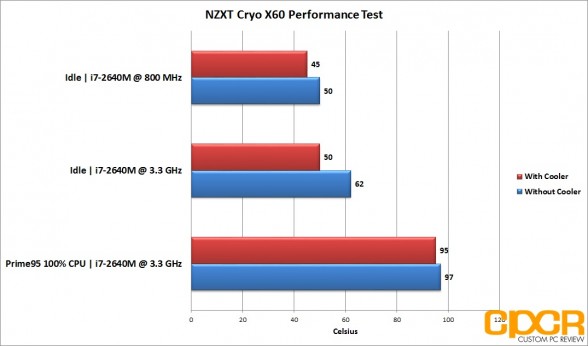 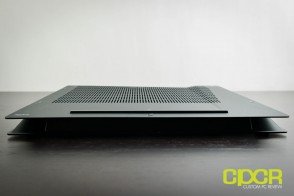 Overall, I think the NZXT Cryo X60 was a mixed bag for me. The design of the Cryo X60 is pretty awesome. The entire unit is quite sleek and modern, and the entire top of the unit (aluminum) feels like a heatsink laid out flat. Compared to all the cheap, 100% plastic notebook coolers out there, the Cryo X60 actually has a touch of class that most other units lack.

Performance wise, I felt that the Cryo X60 fell short of expectations. Compared to just the stock cooler on the Lenovo Thinkpad X220, the Cryo X60 was able to reduce the idle temperature by a whopping 15°C, which is pretty impressive,  but in the Prime 95 load test, it only shaved off 2°C in comparison to the stock cooler. The reason for this I think has to do with the fact that the puny heatsink on the Thinkpad X220 itself is only able to handle so much heat dissipation in addition to the fact that the ventilation ports on the notebook are quite small. Given a larger notebook with more ventilation options and larger heatsinks, I’m very inclined to think that the story will be much different although I didn’t have a larger notebook on hand for testing.

Although difficult to measure, the entire notebook does tend to feel a lot cooler with the Cryo X60 sitting underneath. Whereas the notebook generally will get too hot to touch after only a couple short hours of use, the Cryo X60 does keep it cooler, which also has the side effect of putting a lot of incidental airflow on other components inside the chassis reducing temperatures overall. 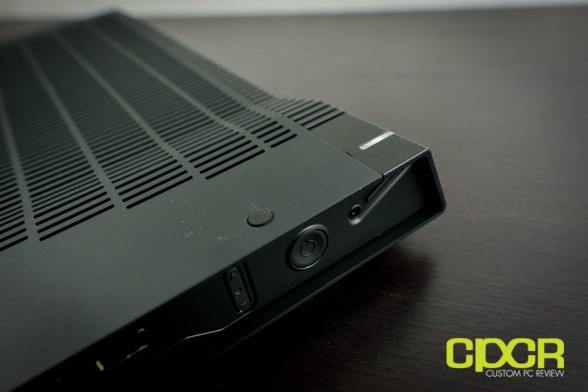 As for noise, I found that at 100% speed, the noise was very audible in my quiet office. Fortunately, the noise can be reduced to a faint purr with the onboard fan controller although this comes at the expense of cooling potential. As far as size and portability, it’s definitely going to be more of a stationary unit than anything. The Cryo X60 is 44mm (1.8″) in height and 392mm (15.4″) wide, meaning it will take up a lot of bag estate if you decide to lug it around.

With an asking price of $49.99 on Amazon, the NZXT Cryo X60 is very much on the pricey side and I’d definitely like to see this unit priced a little lower, but even at this price, I feel like I’m still inclined to recommend the Cryo X60  especially for those with gaming laptops or mobile workstations. With a quality design, an integrated USB hub, integrated fan controller, and the flexibility to be run off a USB cable, it has every feature you need.