Being PC enthusiasts, we love to buy huge cases and load them up with tons of fans. This is beneficial as more fans typically translate into better airflow and of course, better cooling performance to chill our hot hardware. However, with more fans, more cooling, and more airflow, one problem that’s bound to happen is increased noise. While a bit of noise is perfectly acceptable when you’re doing something intensive like rendering a video or playing Battlefield 3 with a headset, it can get annoying when you’re trying to appreciate some Beethoven and your PC sounds like a 747 about to taking off. To make a PC a bit more quiet, there are a couple of options. The first of course is to buy a silent case. Although these are very effective at reducing noise with noise insulating foam, they tend to have to limit airflow and have higher internal temperatures. The second is to buy silent fans from silent fan makers such as Noctua. Although they provide adequate airflow while staying at acceptable noise levels, they can get very pricey. The last option of course, is to purchase a fan controller to lower the speed of your fans when your PC is idle. After all, it doesn’t matter how silent your fan is, at 3,000RPMs, it’s guaranteed to be loud. 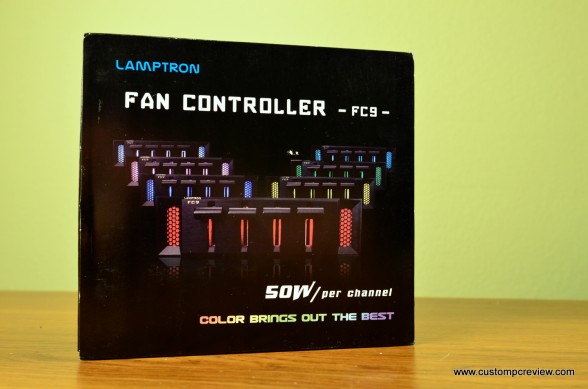 Today’s review will be focused on two fan controllers from computer peripherals manufacturer Lamptron. They’re not really a company we hear about every day, but they offer quite a selection when it comes to fan controllers.

The first fan controller we’ll be taking a look at is the Lamptron FC9 Fan Controller. This fan controller is a basic fan controller designed for simply controlling your fans via sliders. The fan controller is unique in the fact that it can support up to 50w per channel and includes onboard adjustable LED backlighting. Out of the box, it will have support for up to four fans simultaneously. 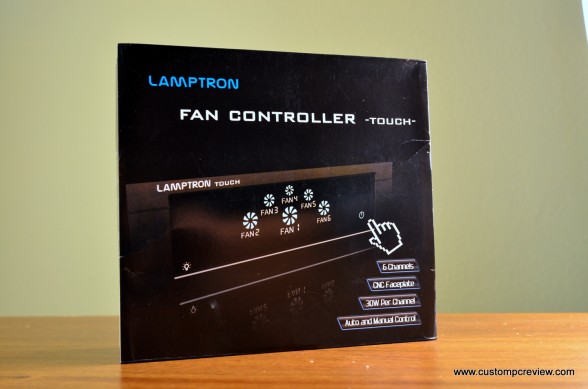 The second fan controller we’ll be taking a look at is the Lamptron FC Touch Fan Controller. Like the FC9 Fan Controller, the FC Touch is designed to be used in a 5.25″ bay, includes a high quality CNC milled faceplate, and is of high quality construction. However, unlike the FC9 Fan Controller, the FC Touch is much more advanced, sporting a fully functional touch screen with the capability of displaying information such as voltages, fan speeds, temperatures, etc. Out of the box, it will also have support for up to six fans simultaneously. 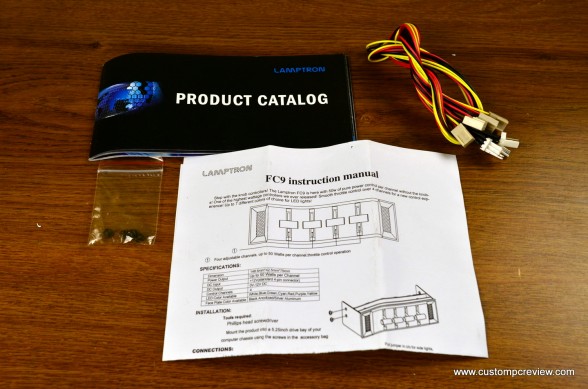 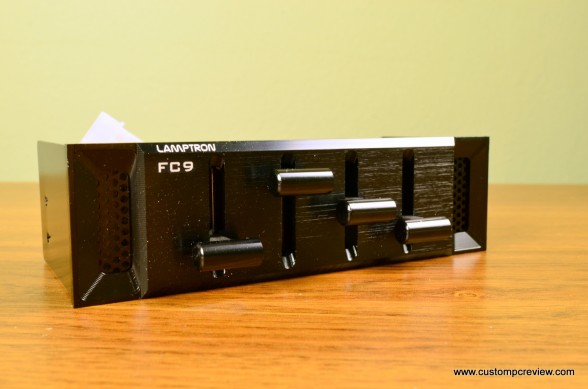 The front of the FC9 is made of CNC milled aluminum and four large sliders in front provide the voltage adjustments for the fan controls. The far right and left side of the fan controller includes a mesh area which will allow light to be emitted from the LEDs beneath. 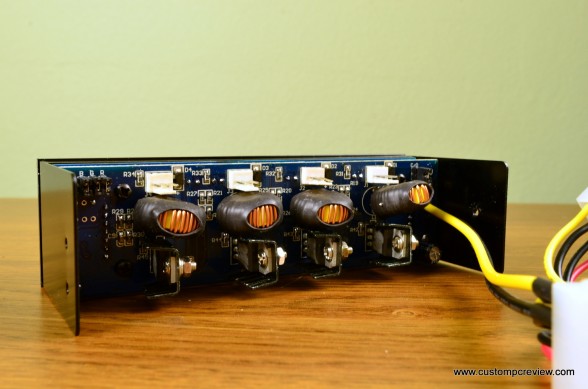 Around the back we get 4x 3 pin fan connectors which can supply up to 50w per channel. On the left side, there are three jumpers labeled B, G, and R. Used individually, they will cause the LEDs to be either blue, green, or red. Additionally, multiple jumpers may be connected in the following configurations: B+G (cyan), B+R (purple), G+R (yellow), and B+G+R (white) as well. There’s also a jumper on the right side that can be used to disable the side lights. 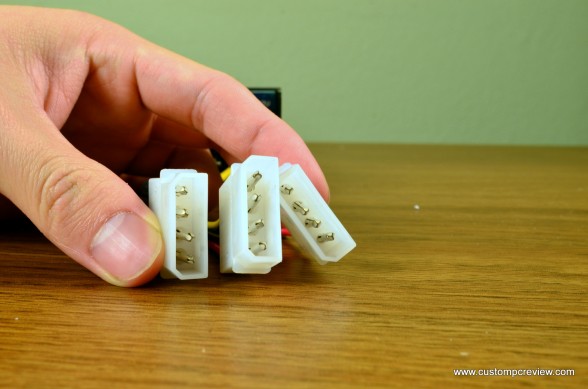 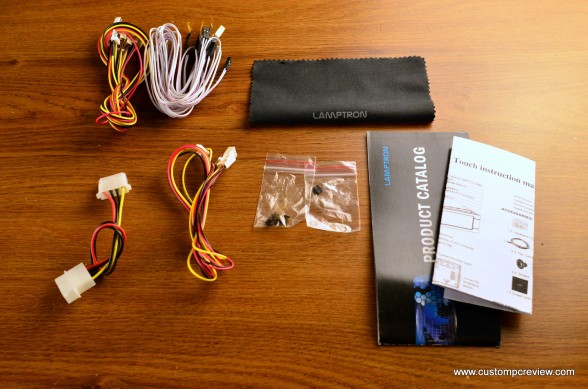 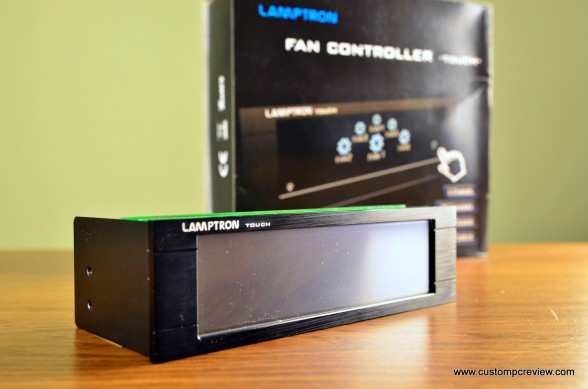 The FC touch is extremely simple looking. The front has no features other than the large touchscreen. The casing around screen is crafted with super high grade CNC milled aluminum, so it’s as durable as it is good looking. 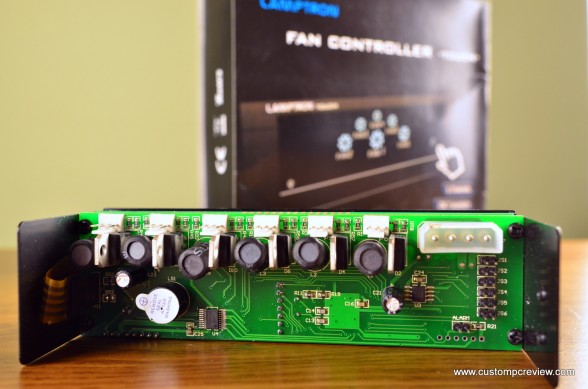 The back of the FC Touch features 6x fan headers and 6x resistors with variable resistance. A 4 pin molex power connector is required to power the fan controller. The jumper headers below the 4 pin molex power connector are for the internal temperature sensors. When connected, the LCD touchscreen at the front will display the temperature readings of the corresponding sensor connected. The temperature sensors are required for the FC touch to operate in automatic mode, which will automatically adjust the fan speeds based on sensor readings. There’s even an alarm function built-in that will produce a sound when a sensor detects that the case temperature exceeds 70 degrees Celsius. Although this function could be useful to those who don’t have any other temperature monitoring utilities whatsoever, none of my temperature sensors were able to reach the alarm temperature during testing. 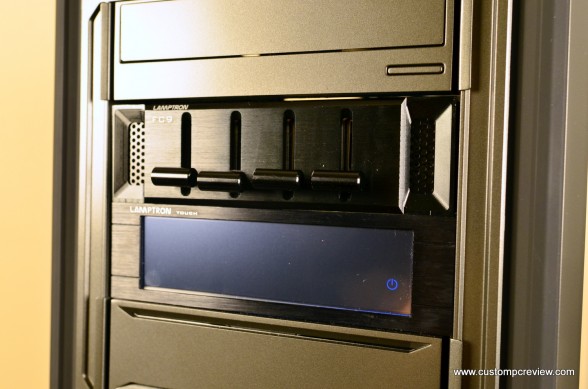 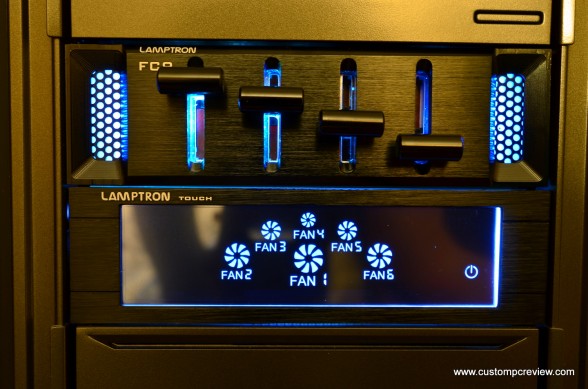 Here’s a look at both the Lamptron FC9 (top) and the FC Touch (bottom) powered on. The FC9’s LED is very bright and looks pretty good overall. Colors may be changed through jumpers on the fan controller’s PCB, but will require access to the back of the fan controller. The sliders are extremely smooth and won’t drop under their own weight. Power delivery to the fans are very good as well. The FC Touch may be turned on by touching the power icon on the bottom right. Once powered on, settings for each of the six fans may be accessed via touching their corresponding icons. 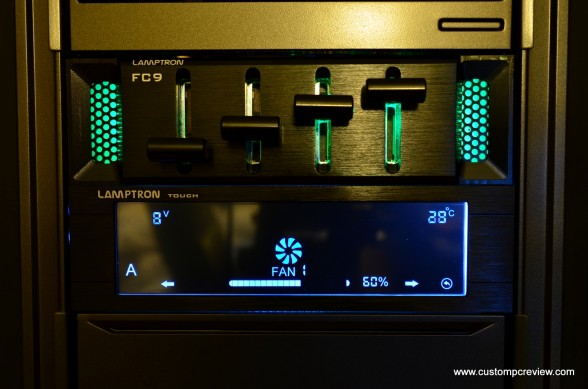 Once you’re into any fan menu (In this case fan 1), information about the fan will be displayed. The top left shows the amount of voltage being delivered to the fan while the top right delivers the  temperature if temperature sensors are installed. You may also opt to have the display show RPMs at the top left or Farenheit at the top right. To do this simply either touch the top left or top right of the screen. At the bottom left, the fan control may be switched between automatic and manual modes (Via touch as well). Automatic mode would adjust fan speeds based off temperature while manual mode will allow you to take full control of the slider at the bottom. Automatic mode may be programmed as well. Programming is quite easy and information about programming the controller may be found in the users manual. Additionally, at the bottom right there’s also a return button which would bring you back to home menu with the list of all the fans currently connected. The touch screen is quite responsive and the entire system is intuitive as well.

You can also see that I’ve swapped the back lighting of the FC9 to green for this shot. As mentioned earlier, this is done through swapping a couple of resistors. 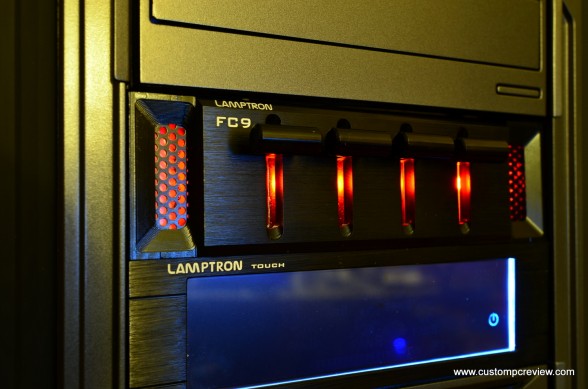 Starting with the FC9 Fan Controller, overall I found the product to be quite good with installation of the unit being extremely easy. The sliders on the front were very smooth and the LED lighting was extremely bright. Fan speed control was responsive and I was able to tune the RPM of my fans very precisely. The unit also features power delivery of up to 50w per channel, which isn’t too common on most fan controllers. This is important if you’re running stuff like ultra high RPM Delta fans or things of the sort, but I think for most users, it won’t be necessary.

I was quite amazed at how amazing the quality on the unit was; the CNC milled aluminum construction was classy and durable. Lamptron includes only a one year warranty with the FC9 fan controller, but don’t let the short warranty throw you off – this fan controller should last a very long time considering the high-grade components put in. I would’ve definitely liked to see some way of changing the LEDs without having to go to the back of the unit though. This typically required the removing of all four screws, which sucks big time. Additionally, I would’ve liked to see longer sides for the FC9 and the FC Touch. The tool-less designs for most cases don’t work very well on either fan controller as they both only feature half-length sides.

Pricing on the FC9 is currently around $59.99 and is currently available from one of Amazon’s third party re-sellers. For those looking for a simple, no frills, high quality fan controller, I think the FC9 is a pretty good choice. However, with the much more advanced FC Touch being less than $10 more than the FC9, it makes you wonder why the FC9 is so pricey – especially since it’s missing a touchscreen, temperature sensors, and all the other cool features. Other than having 50w per channel instead of the FC Touch’s 30w per channel, the FC9 doesn’t really compare with the FC Touch feature wise. Course, if you’re sporting high RPM fans, you might not have a choice.

For those who don’t mind the higher than normal price tag or for those who manage to find the FC9 on discount, it’s an excellent option for those looking for a no frills fan controller that performs as great as it looks. 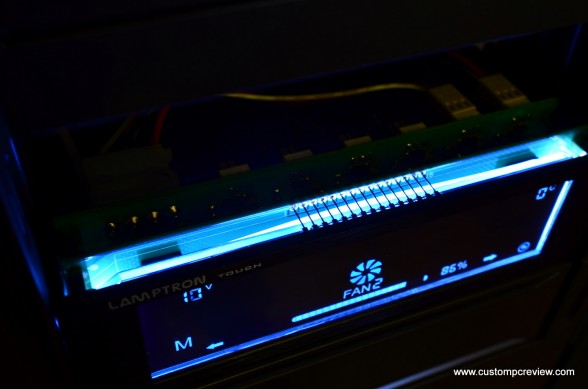 Moving onto the FC Touch, I must say this is officially what I consider to be the best high end fan controller on the market. The touch screen was quite accurate and responsive for a touch based unit, and everything worked very well from the temperature sensors, to the automatic fan control, etc. The unit was also extremely cool. You don’t really see a touch screen fan controller every day.

Similar to the FC9 Fan Controller, the design and quality is top notch as evidenced by the CNC milled aluminum materials. Warranty is just the one year offered through Lamptron, but similarly with the FC9, I doubt the FC Touch will have any issues for a long time to come. With the FC Touch, I really didn’t have any issues with the unit at all. Every feature worked, and it worked extremely well. The only thing I found a bit annoying is that changing all 6 fan controls individually is a bit time consuming since you’d have to go into every menu to set the fan speeds. It definitely would’ve been nice to have an option to control all fans at once. You could always put it in auto mode, but setting up all the temperature sensors while still maintaining remotely good case wiring is a seriously time consuming task. I’d also be nice to see a full color LCD on the device. Monotone is just out of style these days. Then again, I’m probably just asking too much from a fan controller.

Pricing on the FC Touch is currently priced around $68.00 and is available from one of Amazon’s third party re-sellers. Considering the amount of features the product offers, I think it’s priced very competitively – even when compared against Lamptron’s own FC9.

Special thanks to Lamptron for making this review possible.