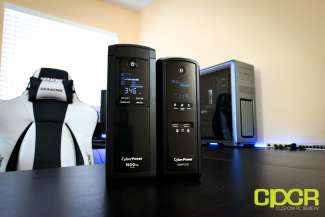 If you own a PC and you’d be quite bummed if it died because your utility company sucks, a UPS (Uninterruptible Power Supply) is practically a must. This is especially important if you’ve spent thousands of dollars for the best system possible since at the end of the day, it really only takes a single surge, brown out, or power outage from the utility company to wreak havoc on your precious semiconductors.

Looking at the specifications, both the CyberPower CP1500 AVR LCD and CP1500 PFC LCD feature a line-interactive topology and both are rated at 1500VA, which is the highest capacity in their respective lineups.

The main difference between the CyberPower CP1500 AVR LCD and the CP1500 PFC LCD is in their electrical output wave form. While the CP1500 AVR LCD features the ability to output a simulated sine wave, the CP1500 PFC LCD features the ability to output a true sine wave, which is necessary for more sensitive electronic equipment as well as systems with special active PFC power supplies. We’ll be sure to take a closer look at that later in the review.

A Closer Look at the CyberPower CP1500 AVR LCD 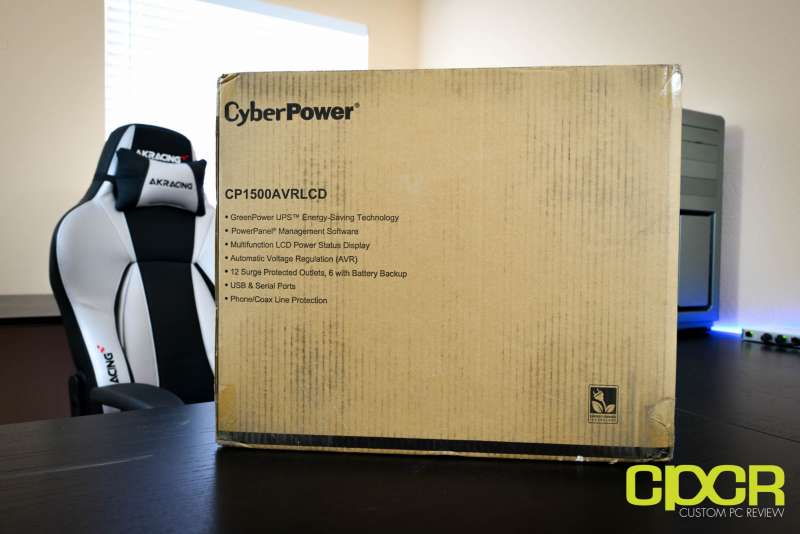 Here’s a look at the packaging for the CyberPower CP1500 AVR LCD.

Included in the packaging is documentation, a USB Type-A to Type-B cable, and the CP1500 AVR LCD.

The CyberPower CP1500 AVR LCD is the largest in the CyberPower Intelligent LCD UPS lineup featuring a maximum load capacity of up to 1500va. The unit is quite big, measuring in at 3.9″ x 11″ x 14″ and weighing 25 lbs.

At the front of the unit is three buttons: power, display and mute. At the rear there are two phone/ethernet ports, two coax ports, a USB Type-B port, a serial port, and 12 standard power ports, six of which are surge only and the other six also include battery backup.

A Closer Look at the CyberPower CP1500 PFC LCD 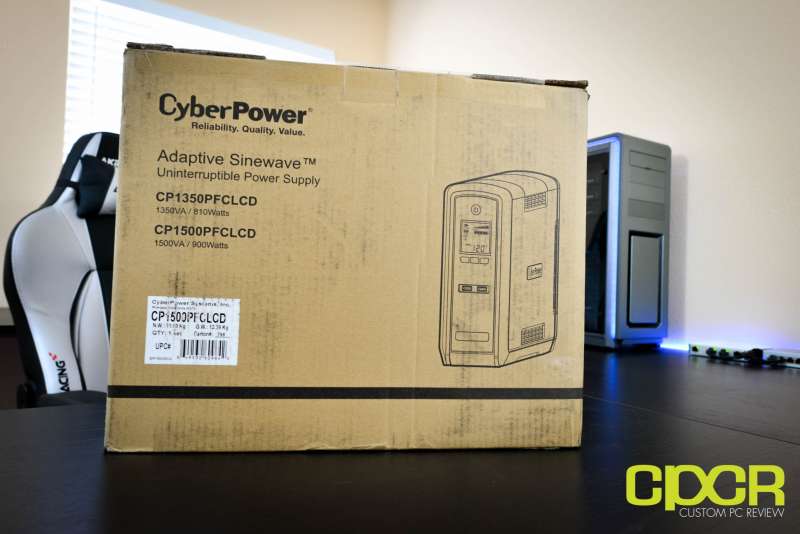 Here’s a look at the packaging for the CyberPower CP1500 PFC LCD.

Included in the packaging is some documentation, a USB Type-A to Type-B cable, a coax cable, a RJ-11 phone cable, and the CyberPower CP1500 PFC LCD.

At the front of the unit is four buttons: power, display, silence alarms, and control. At the front is also two 1A USB power connectors which can be used to charge low power USB devices. At the rear there are two phone/ethernet ports, two coax ports, a USB Type-B port, a serial port, and 10 standard power ports, five of which are surge only and the other five also include battery backup.

Replacement batteries for the CyberPower CP1500 PFC LCD is the same lower rated 12V, 8AH CyberPower RB1280X2A as the CP1500 AVR LCD. This means runtime will likely be negatively affected as well.

Most of CyberPower’s consumer grade UPSes interface with their PowerPanel Personal Edition software which allows a quick and easy way to monitor and configure the UPS. 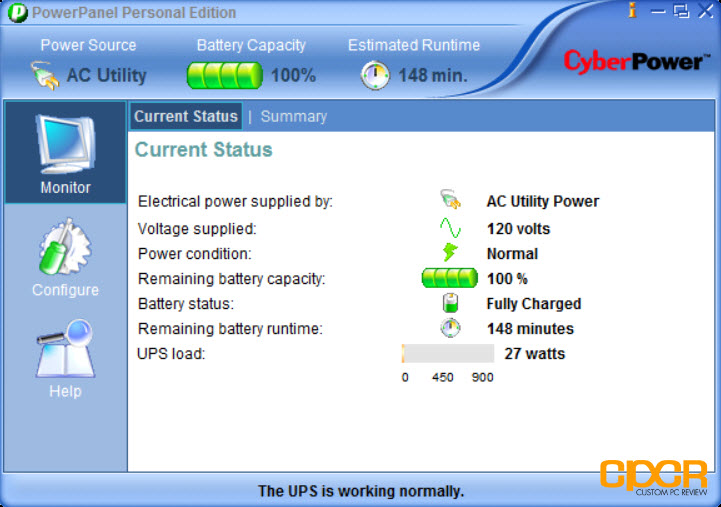 Once the PowerPanel Personal Edition software is launched, the software quickly shows some statistics about the system including how much electricity is supplied, what the load is how much battery runtime is available, and more. 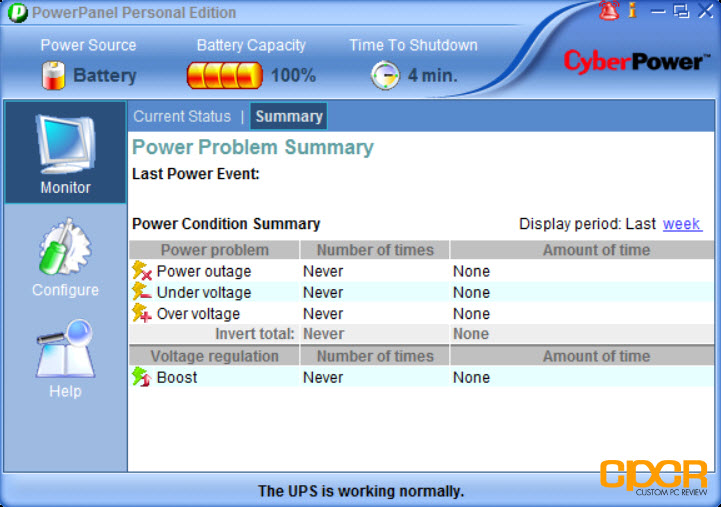 Under the configuration section, a number of configuration and testing options are available. This includes schedules, the configuration of notifications/alarms, how the UPS should react in the event of a power outage, at what voltages does the UPS intervene, self testing, and the sensitivity to input voltage.

In order to test the runtime of the UPS, we devised a test using a series of 50w fluorescent lightbulbs. By chaining the bulbs together, we could load the UPS to a fairly precise amount of power draw. After charging up the UPS to maximum capacity, we plugged in the measured load until the power ran out, then recorded the time it took for power to run out. 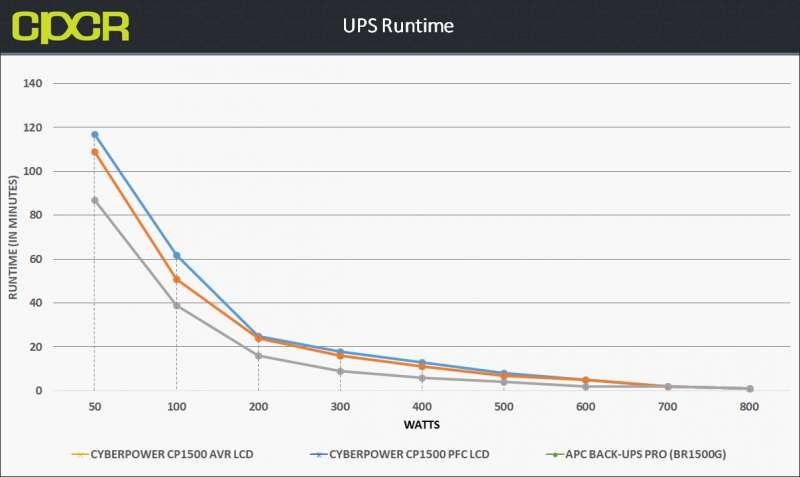 Runtime on both the CyberPower CP1500 AVR and PFC units were quite a bit better than expected, especially when compared to the APC Back-UPS Pro 1500 reviewed previously. For a typical system load of 200W, the CP1500 AVR was able to achieve 25 minutes of runtime while the CP1500 PFC was able to achieve 24 minutes of runtime which should be more than enough to save your work and shut off the system.

Here we can see the main difference between the CP1500 AVR LCD and the CP1500 PFC LCD. With the PFC series, the battery output is a perfect sine-wave which is identical to power coming from the utility company. With the AVR series, the battery output is a stepped sine-wave. Interestingly enough, the CP1500 PFC’s power is actually cleaner and at a more proper voltage than the power coming out of our utility company which typically hovers around 110v-115v.

While we had no issues with any of our systems using the battery output from the AVR and PFC UPSes, some power supplies that feature active PFC (Power Factor Correction) may require the use of a UPS that is capable of outputting a true sine-wave. Further, more sensitive electronics such as AV equipment may also require a true sine-wave output for proper operation. Be sure to check with the equipment vendor to see if a true sine-wave UPS is required.

Transfer time refers to how long it takes after AC power is lost for the battery backup to kick in. As such, the lower the transfer time, the better as too much of a delay will result in a system shutting down as soon as the power goes out rendering the UPS useless. Transfer time will greatly depend on the type of UPS and how it’s designed internally.

CyberPower rates both the CP1500 AVR LCD and the CP1500 PFC LCD with a transfer time of 4ms. In testing, transfer time for both units were closer to around 8-11ms, which is what you’d typically find in a line-interactive UPS. This shouldn’t be an issue for most quality power supplies in modern PCs, but if you know for a fact that even 1ms of transfer time may be too much, it may be necessary to purchase an on-line UPS. 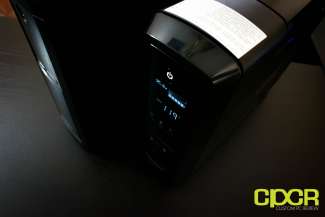 Overall, both the CyberPower CP1500 AVR LCD and the CP1500 PFC LCD are impressive UPSes that not only get the job done, but does it well. In testing, both units had no issues with any electronic equipment that was tested and both units were able to achieve significantly longer runtimes than the APC Back-UPS Pro 1500VA which we reviewed previously. While both are excellent UPSes, those who want a cleaner backup power source or have equipment that requires a clean, true sine wave power source will want to go with the CyberPower CP1500 PFC LCD.

The only additional feature I’d like to see is the ability to power down specified power outlets on the UPS when for example a main power outlet is powered down. This was a feature we saw on APC’s Back-UPS Pro 1500VA which turned out to be a very convenient feature as it would automatically shut off peripheral devices such as monitors, speakers, etc. when the main PC is shut down. This helps significantly reduce power consumption of devices we typically don’t think about turning off on a regular basis.