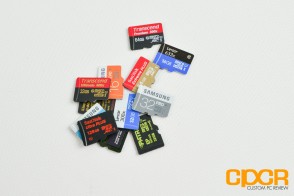 Back in late 2012, we rounded up a total of thirteen memory cards from a number of memory card vendors and put them to the test in both synthetic and real world applications. At the time, we tested both SD and CF cards from various vendors to find out which of the cards performed the best, which of the cards provided best value, and at which point do returns begin to diminish in the real world. Ever since we published that article, many of you have asked us for an update which is already in the works pending a couple more samples from various memory card vendors.

Now one type of memory card we’ve never addressed is the microSD (microSDHC/microSDXC) card market which has recently exploded thanks to the growing popularity of smartphones, tablets, and action cameras. Back in November of last year, I myself picked up a new smartphone, the Samsung Galaxy Note 4, and one of the big features of the phone was the ability to take microSD cards for expanded storage. Being a newer phone, I assumed it’d be able to take advantage of high performance microSD cards, but searching Samsung’s site and device specifications offered no additional details on which microSD card to buy or if the phone’s internal external memory controller would even be capable of handling the maximum performance advertised by many of today’s latest microSD cards.

Because of this, today we’ll be not only testing twelve of today’s most popular microSD cards for their performance, but we’ll also be taking a look at where returns begin to diminish for smartphone users on one of today’s newest smartphones. 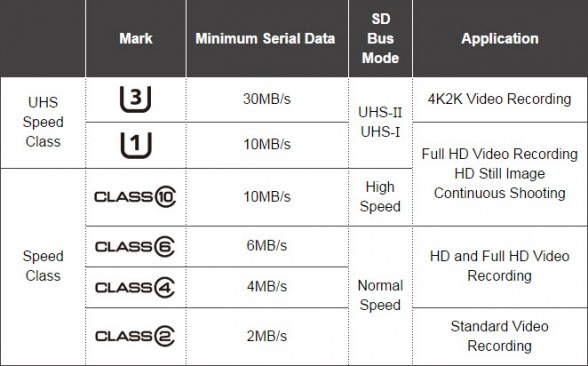 Just like in our previous memory card roundup, I want to touch briefly about how microSD card performance is rated before jumping into the review. Making it simple, microSD cards are actually rated the same exact way as standard SD (SDHC/SDXC) cards.

That being said, today we’ll be reviewing a grand total of 12 microSD cards from our friends at Kingston, Lexar, Patriot, Samsung, SanDisk, and Transcend. The performance of our cards vary from Class 6 to Class 10/UHS-I(U3).

For performance testing, we’ll be running some PC testing to determine what speeds the memory cards are capable of then some testing in our Samsung Galaxy Note 4 to see what the smartphone can actually handle. 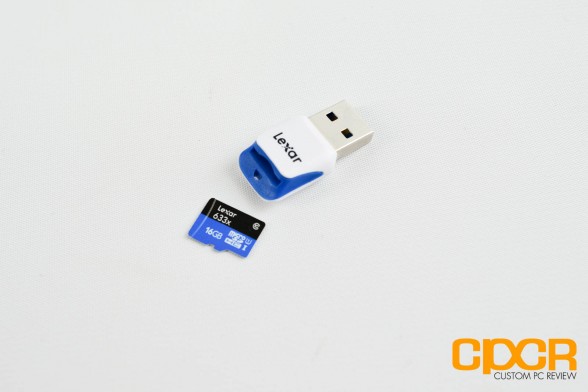 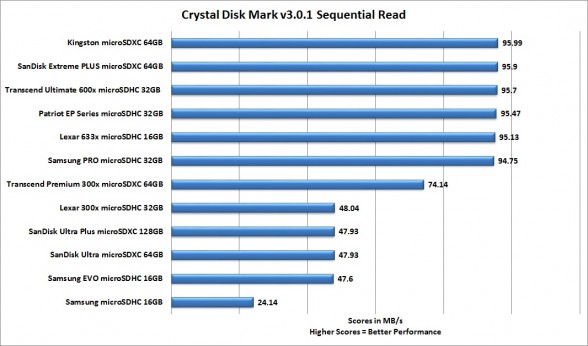 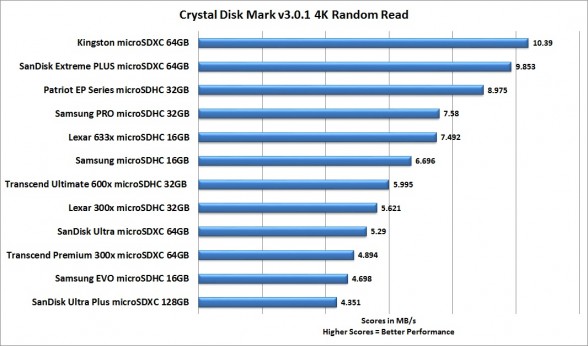 Looking at our read results here, we see about three tiers of microSD cards. The top tier cards for every vendor top out at around 95MB/s sequential reads and the mid tier around 48MB/s. We also had a lower end Samsung Class 6 card which topped out at ~24MB/s. Transcend’s Premium 300x card does stand out however, as it’s a mid-tier card that does almost 75MB/s reads. 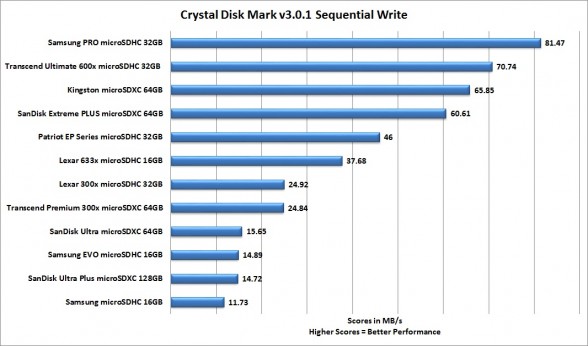 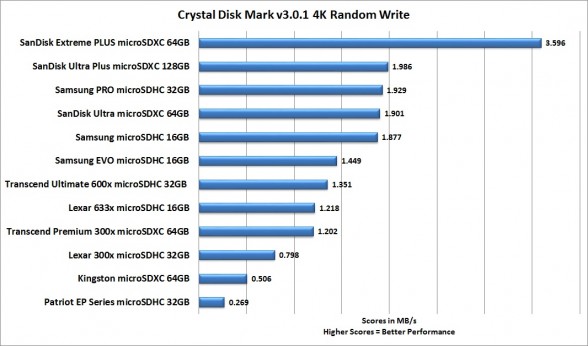 Sequential write performance is all over the place, but the more premium category cards generally performed very well. Samsung’s PRO microSDHC card performed the best in the pack as it was the only card to break 80MB/s. Interestingly enough, even the Class 6 Samsung microSD card was able to break 10MB/s. 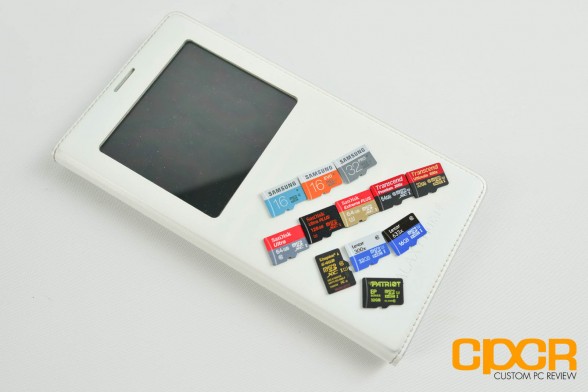 The device we’ll be using is the Samsung Galaxy Note 4 (Snapdragon), which is equipped with a microSD card slot that supports microSD cards up to 128GB. Looking online, surprisingly very little additional information is available on which microSD card is recommended for purchase.

Again, we’ll focus our analysis on sequential read/write testing as that’ll likely be the primary workload for the microSD card, but 4K read/write performance will be available for reference. 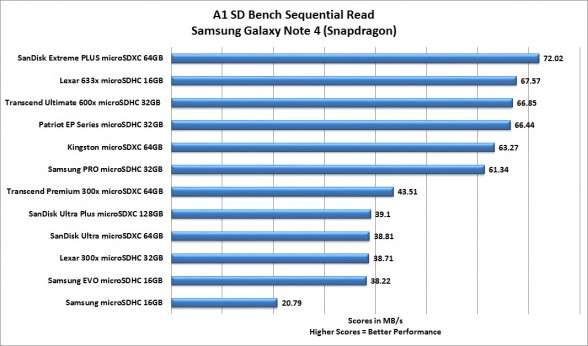 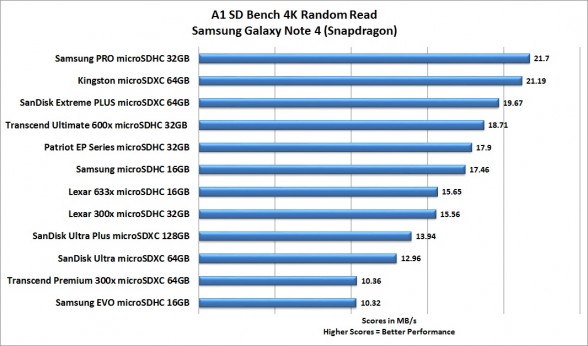 Looking at our testing here, it’s apparent that the Samsung Galaxy Note 4’s microSD storage controller is the bottleneck with performance maxing out somewhere between 61MB/s and 72MB/s. 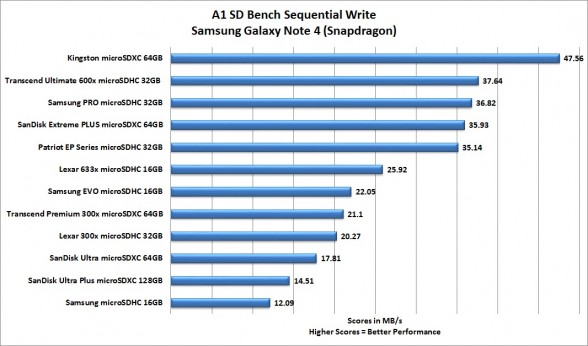 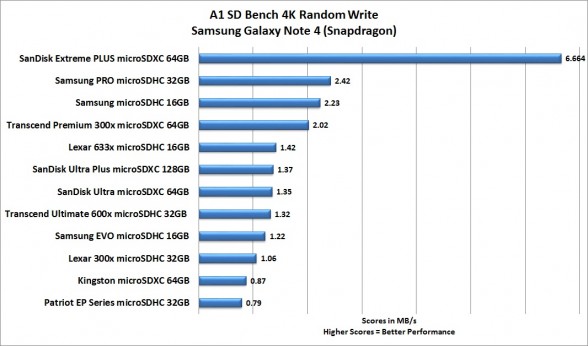 Sequential write performance on the other hand appears to be limited to somewhere between 30MB/s and 50MB/s. Interestingly enough, Kingston’s microSDXC card leads the pack at 47.56MB/s. Again, even the Class 6 Samsung card is able to break 10MB/s sequential writes.

For most people, UHD (3840×2160) video recording is likely going to be the most storage intense workload on the Samsung Galaxy Note 4 and in testing, every single one of our memory cards were able to record UHD video without issue including the Samsung 16GB Class 6 microSD card. The Samsung Galaxy Note 4’s UHD videos are encoded in 48Mbps H.264 compressed files, which means any proper Class 6 microSD card should theoretically be capable of recording UHD video just fine – at least until the phone hits the 5 minute UHD recording limit or overheats. 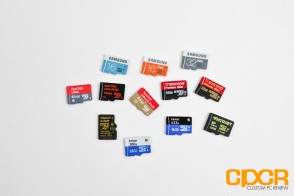 Alright, so with testing out of the way, let’s share a couple thoughts about this roundup review.

The biggest question I had going into this roundup is can one of today’s latest smartphones take advantage of today’s fastest microSD cards and the conclusion is a qualified yes. Qualified because yes, it can take advantage of high speed microSD cards, but it will be determined by the device. In our Samsung Galaxy Note 4, there was a limit which turned out to be ~73MB/s sequential reads and ~48MB/s sequential writes. This means that the top tier microSD cards we tested today were actually capable of faster transfer rates than the device can actually support.

That being said, despite the device being capable of taking advantage of faster memory cards, during testing slower memory cards didn’t necessarily compromise the functionality of the device nor did it affect user experience as much as I originally expected. In terms of functionality, everything (including 4K UHD video recording) worked just fine on even the Samsung Class 6 microSD card, the slowest memory card in our lineup. Where I saw the biggest benefit to having faster memory cards is transferring data to/from the PC and loading media such as images in the gallery. The faster memory cards such as the SanDisk Extreme Plus and the Samsung PRO cards felt noticeably faster than the Samsung Class 6 when loading full-size images via the gallery app. However, the difference between the mid-tier and the top tier cards has very little perceptible difference during typical usage scenarios. 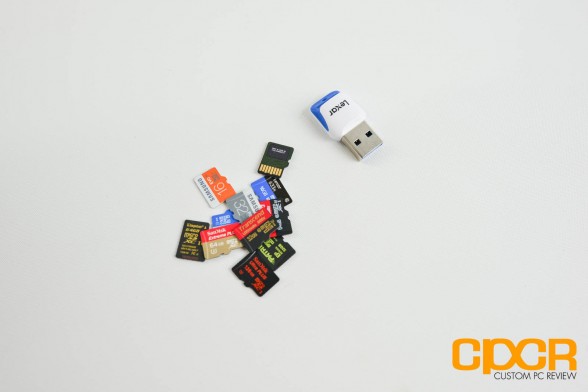 Additionally, smartphone users who have root access on their phones can also offload applications to their SD cards as well. Application loading and application performance would greatly rely on the microSD card’s 4K random read/write speeds however, I didn’t find offloading apps all that helpful given that internal phone storage is significantly faster than even the fastest microSD cards we tested today.

In terms of pricing, microSD cards definitely aren’t the most expensive storage products on the planet. Prices range from ~$0.53/GB to ~$1.56/GB, which is relatively inexpensive compared to some of the specialized $4+/GB CF cards we reviewed in our previous roundup.

As for best microSD card in our roundup, I’d have to say the SanDisk Extreme Plus is probably it. The card not only excelled in both sequential reads and writes, but also in 4K random reads and writes as well. It not only has the highest performing 4K random write performance in our roundup, but also beats the next closest competitor by 2-3x. This coupled with its lifetime warranty makes it our top performance pick in the cards we’ve tested today. SanDisk also offers an even more extreme version of the Extreme Plus, the Extreme Pro, which we’d love to check out down the road, but given its significantly higher pricing the Extreme Plus will probably end up being the better value by a significant margin. As a close second, the Samsung PRO microSD card is also our top pick with its class leading sequential read and write performance.

Speaking of value, the award for maximum value definitely goes to both the Lexar 300x and the Transcend Premium 300x microSD card. At $0.53GB, you can not only get 64GB of storage for just ~$34, but you’re also getting class leading sequential read/write performance and a lifetime warranty as well. These are excellent cards which I think would be the perfect choice for current generation smartphone applications. 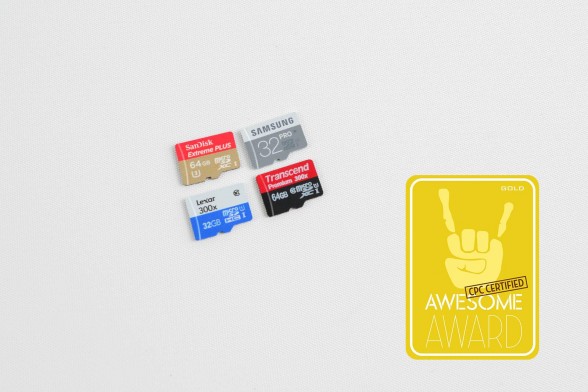