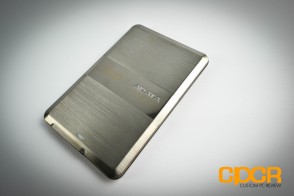 Last week we reviewed the Transcend StoreJet 25A3 1TB USB 3.0 portable hard drive and while hard drives are great from a cost per gigabyte standpoint, they’re still miles behind SSDs when it comes to performance. With the now widely adopted USB 3.0 interface standard along with its 5 Gbps theoretical maximum bandwidth, the USB interface is finally capable of better meeting the level of performance that’s available through SSD technology.

Aside from that, there’s not much additional info than what we have here, so let’s go ahead and jump right into the review! 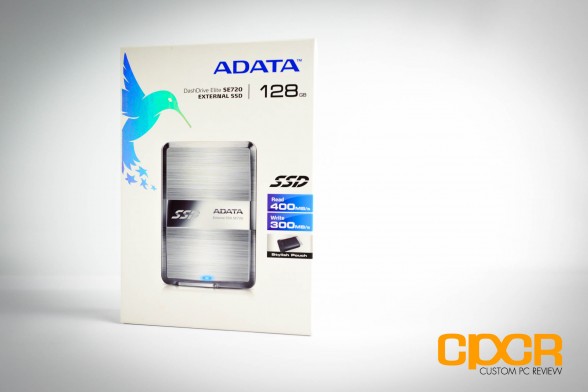 Here’s a look at the packaging for the ADATA DashDrive Elite SE720 128GB. 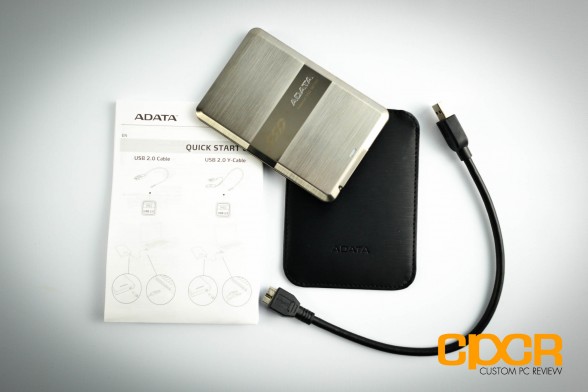 Included in the packaging we get some documentation, a USB 3.0 to Micro USB 3.0 cable, a form-fitting carrying pouch, and the DashDrive Elite SE720 128GB. There’s no software included, but it’s 100% plug and play. 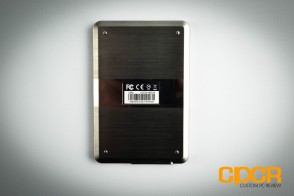 The DashDrive Elite SE720 is almost completely constructed of stainless steel, which helps increase durability and cooling. Unfortunately, the stainless steel used here isn’t all that stainless as it tends to attract a lot of fingerprints. 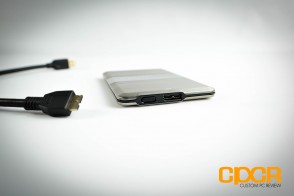 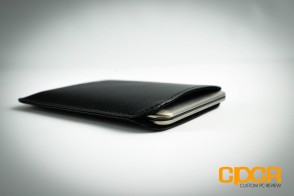 At the front of the DashDrive Elite SE720 we get a micro-USB 3.0 port along with a backup button. The unit itself is quite slim at only 8.9mm thin. 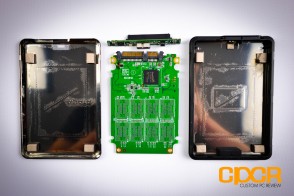 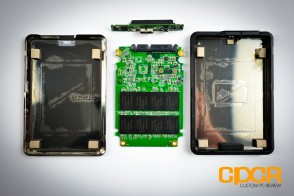 Pushing in a couple tabs on the corners of the casing, we can open up the drive to check out the hardware ADATA has chosen for the DashDrive Elite SE720. Underneath the hood, we get what essentially is an ADATA SSD hooked up to a SATA to USB 3.0 bridge. 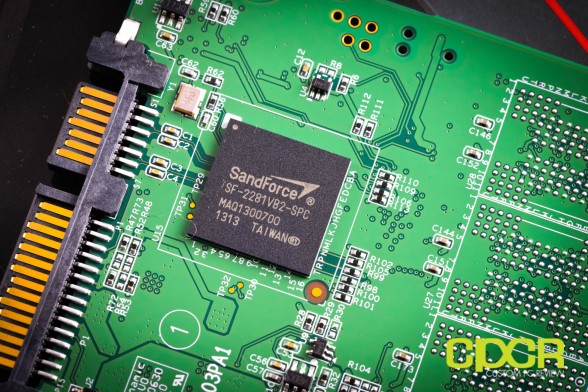 ADATA has always exclusively been a SandForce partner, so it’s expected that they’ve got a SandForce SF-2281 B2 chip under the hood.  We should all be pretty familiar with the SF-2281 by now… 8 channels, SATA 6Gb/s, DuraWrite, RAISE, etc. The B2 stepping improves upon the B1 version by adding DevSleep support for ultra low power consumption, but we won’t be able to take advantage of that via a SATA to USB 3.0 bridge. 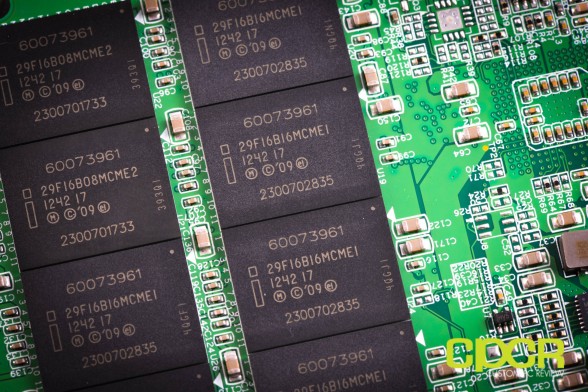 Here’s a look at the NAND. Whoa. That’s unexpected…

Digging a bit deeper into this topic, it seems like the NAND onboard may be something that’s luck of the draw rather than guaranteed. Our good friend Les Tokar at The SSD Review previously published a review on the DashDrive Elite SE720 128GB and on his sample, only one of eight NAND packages used 10,000 P/E eMLC. The other seven NAND packages contained the high endurance 5,000 P/E MLC, which for the still isn’t bad at all. 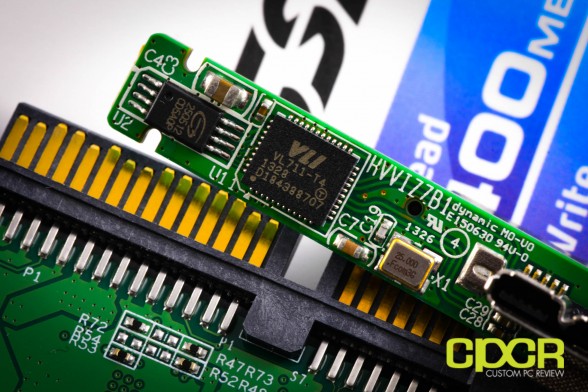 To interface with USB 3.0, ADATA is using a VLI VL711 SATA 6Gb/s to USB 3.0 bridge. Seems decent, although there’s not much info on this part available to the general consumer. We’ll find out how well it does in testing though… Let’s move on. 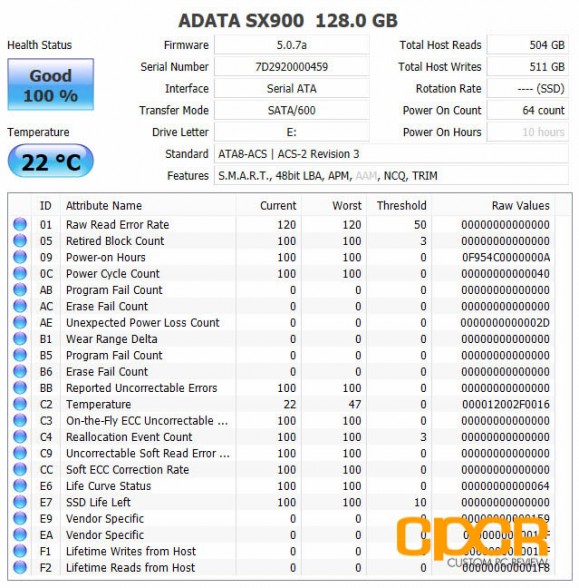 Typically before testing, we like to go ahead and run Crystal Disk Info to get some more detailed information on the drive. Surprise surprise, what do we have here? Looks like the SSD ADATA is using is their very own ADATA SX900 128GB SSD. I guess it’s not too surprising since ADATA has to source a SSD from somewhere in order to drop it into their external enclosure. Might as well use their own, right?

Wow. I think I’ll just let the performance do the talking here. From what I can see here, all indicators point to the VLI VL711 as being a pretty sweet USB 3.0 to SATA 6Gb/s bridge chip.

With a UASP supported operating system (Windows 8 or above), the DashDrive Elite SE720 is capable of sequential reads/writes up to ~446 MB/s and ~451 MB/s respectively. In comparison, this is approximately 3x-4x faster than the performance you’ll typically see in a USB 3.0 external hard drive. Considering USB 3.0’s maximum theoretical performance is 5Gbps (~640 MB/s), hitting ~451 MB/s is pretty good especially since in the real world we have to account for USB overhead eating up some performance as well.

Since this is a SandForce drive, it does suffer a bit once we begin operating with completely incompressible data. For the most part, it’s just sequential writes that dips to the 193 MB/s range from the 400 MB/s range, but for most usage scenarios, it’s pretty rare that you’ll see 100% incompressible data, so performance will generally hover between 200 MB/s and 400+ MB/s. 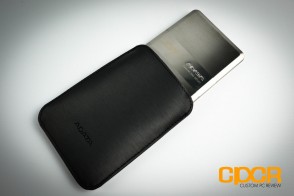 Alright, with all that out of the way, let’s go ahead and talk about the ADATA DashDrive Elite SE720, but some of you may be wondering who the heck ADATA is. For those unfamiliar with ADATA, well they’re a Taiwan based manufacturer of memory and SSD products. While their presence is actually quite big in Taiwan, their presence in the USA isn’t anywhere near that level although in recent years they’ve been  making huge inroads into the USA market. With products like the DashDrive Elite SE720, it’s not difficult to see why.

Performance on the ADATA DashDrive Elite SE720 is about as good as it gets with maximum performance topping out at ~446 MB/s reads and ~451 MB/s writes. I really have no complaints here as this is pretty much the type of performance you’ll get off even the fastest SSDs hooked up to external UASP enabled USB 3.0 docks. We’re pretty much limited by drivers, USB overhead, and the SATA 6Gb/s to USB 3.0 bridge at the moment, so until both of those improve significantly, that’s the maximum performance we’ll get.

As for the form-factor and design, I like what ADATA has done although it could see some slight improvements. The fact that the drive is only 8.9mm thick is great for taking on the go and the included case is a pretty good value add. The stainless steel finish on the other hand looks pretty good when new, but for some reason it wasn’t as stainless as advertised considering my sample was a huge fingerprint magnet. What a bummer. 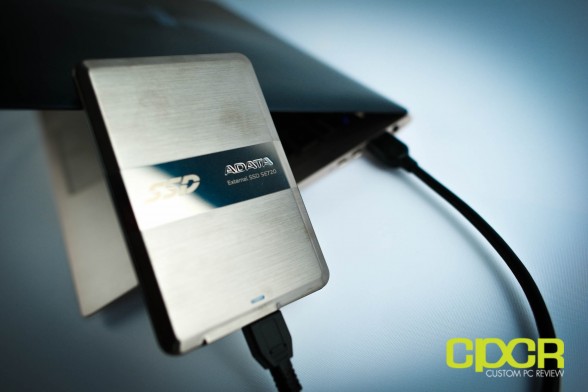 Those frustrated with excruciatingly slow performance from portable USB 3.0 hard drives may find the ADATA DashDrive Elite SE720 a relatively inexpensive, yet perfect solution to their “slow” problem. Recommended!