Fresh news out of the ISCCC (International Solid-State Circuits Conference) as AMD has recently shared some new specifications on their Zen architecture powering the highly anticipated Ryzen processors expected to ship in the coming weeks. 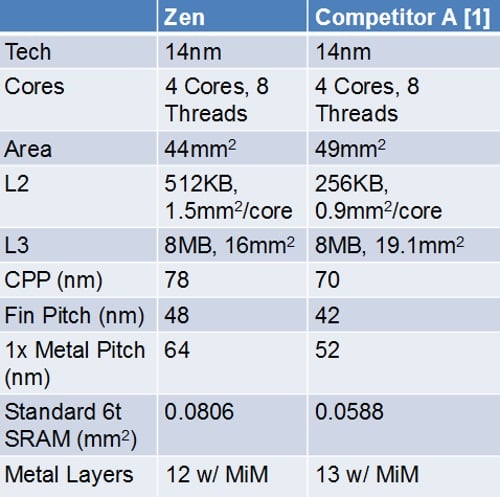 In an article published by EEtimes, AMD released a paper which shows that their 14nm Zen cores utilize 10% less die area (44mm² vs 49mm²) and has double the L2 cache compared to Intel’s current generation 14nm Skylake cores. Both analysts and Intel engineers believe Zen cores are competitive however, a determination on whether the small die sizes will translate into lower manufacturing costs is still unknown at this time. That said, typically smaller die sizes allow more dies to be cut from a single wafer theoretically reducing cost.

Aside from the compact die sizes, AMD has also been able to reduce switching capacitance of Zen cores by 15% compared to existing processors by using techniques such as metal-insulator-metal capacitors. This allows the Zen cores to be more efficient while allowing better voltage and frequency control.