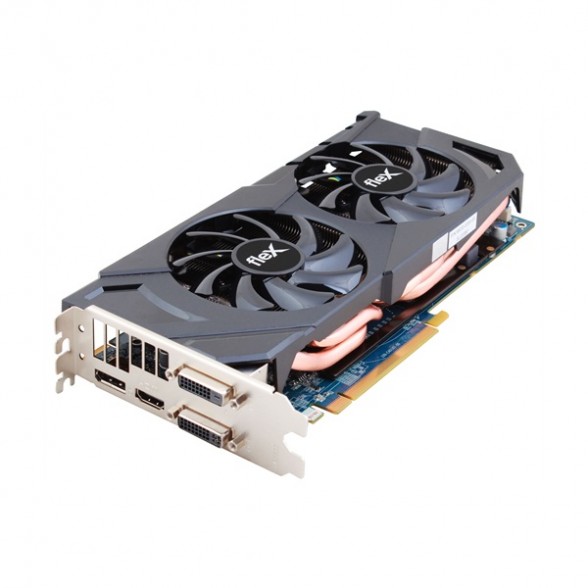 Direct support for up to four monitors in Eyefinity

SAPPHIRE Technology has just announced the SAPPHIRE HD 7870 Flex Edition – only the second model in the highly acclaimed HD 7000 series of graphics cards based on the Graphics Core Next architecture from AMD to feature SAPPHIRE’s unique solution to multi-screen graphics.

Most graphics cards based on AMD technology require the third monitor in an Eyefinity set-up to be a DisplayPort monitor, or connected with an active DisplayPort Adapter. The SAPPHIRE FleX family can support three DVI monitors in Eyefinity mode and deliver a true SLS (Single Large Surface) work area without the need for active adapters. The first two monitors are connected to the two DVI ports and the third to an HDMI to DVI cable (supplied) with no extra active hardware required. The DisplayPort outputs are still available for the connection of additional monitors – for example the recently announced SAPPHIRE HD 7950 FleX with its two DisplayPort outputs can support up to 5 screens in Eyefinity.

The SAPPHIRE HD 7870 FleX brings this feature to the performance segment with its core clock speeds of 1000MHz and 1200Mhz (4.8Gb/sec effective) for the 2GB of on board high speed DDR5 memory. It also features the company’s latest Dual-X cooler technology, with its graduated heatpipes and two aerofoil fans with dust repelling bearings for efficient cooling and low noise operation. The FleX feature enables users to connect low-cost DVI monitors for the first three screens in landscape or portrait mode providing a cost-effective solution for multiscreen gaming or increased productivity in content creation and editing applications. Using the DisplayPort output, the SAPPHIRE HD 7870 FleX supports four screens in Eyefinity, providing additional display options.

The SAPPHIRE HD 7870 FleX also features a Dual BIOS. When the second position is selected, performance is increased by a factory programmed overclock. For enthusiasts wishing to maximise performance, a new version of the SAPPHIRE overclocking tool, TriXX supporting this latest generation of technology is available free to download from the SAPPHIRE website. TriXX allows tuning of GPU voltage as well as core and memory clocks, whilst continuously displaying temperature. Manual control of fan speed is supported, as well as user created fan profiles and the ability to save up to four different performance settings.

The HD 7000 series is the third generation of DirectX 11 compatible solutions from the graphics division of AMD – formerly ATI. The SAPPHIRE HD 7870 FleX is ready for DirectX 11.1 and the new Windows 8 operating system as well as delivering all the features of the current DirectX 11 such as DirectCompute11 and multi threaded communications with the CPU. Communication with the host PC is optimised with the implementation of the latest high speed PCI-Express Gen3.0 interface, and multiple cards can be used to further enhance performance in CrossFireX mode on a suitably specified mainboard.

HDMI specifications have also increased in the HD 7000 series. Fast HDMI 1.4a supports Stereoscopic 3D with enhanced frame rates of 60Hz per eye – 120Hz total. It is also ready for the next generation of 4K displays that can be driven from a single high speed input of 3GHz HDMI 1.4a or DisplayPort 1.2 HBR2.

APP Acceleration is the name given to the enhanced performance of a wide range of applications using the stream processing capabilities and specific hardware features of the graphics architecture. The HD 7000 series has been optimised for this type of task. Typical applications include Video encoding and decoding, compression and multiplexing for media distribution, gaming or video conferencing.  APP acceleration can also enhance everyday tasks such as Internet browsing, Office applications and file compression with supported software suites.