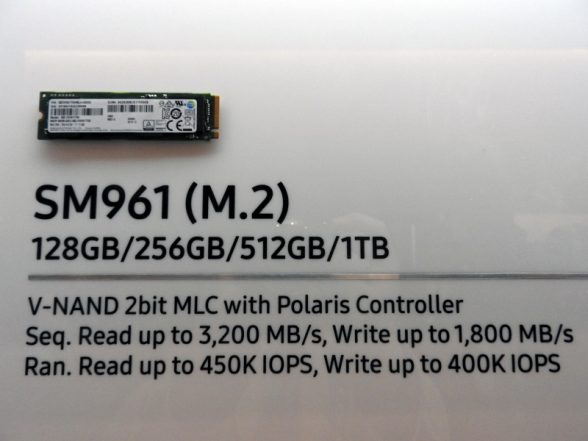 Over the past couple days, the storage world’s been abuzz as Samsung’s latest SM961 PCIe NVMe SSD has shown up online for pre-order.

The Samsung SM961 was originally revealed with the Samsung PM961, a lower-end but still blazing fast alternative to the SM961. It has the same Polaris controller but uses TLC NAND instead of MLC NAND.

The Samsung SM961 is currently only available for pre-order in the 1TB model (#MZVKW1T0HMLH-00000) and would set you back £429.95 (roughly ~$483.74). No actual release or shipping date has been released at this time. The Samsung SM961 is actually targeted towards OEMs, but consumers can still pre-order them here. If you do purchase a SM961, you likely won’t get any support from Samsung, so it may be worthwhile to wait for the consumer friendly version expected to come out later this year.