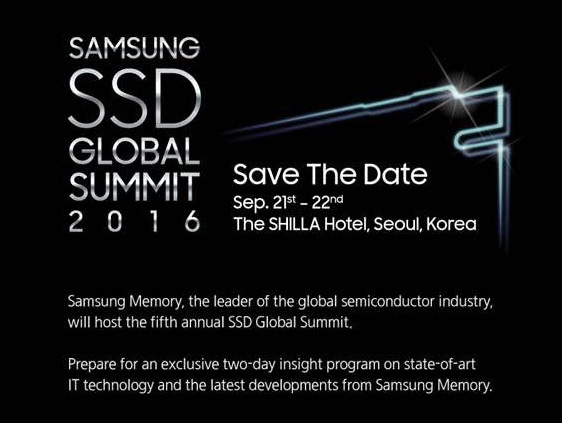 Samsung Memory recently sent out exclusive invitations for their annual SSD Global Summit event which will take place on September 21-22 in Seoul, Korea. The world’s top SSD vendor is expected to release some new products and update us on the latest and greatest in SSD and NAND flash technology.

For 2016, we believe Samsung may be on track to launch a TLC 3D V-NAND version of the PCIe based Samsung 950 Series SSD, possibly the Samsung 950 EVO. Samsung will also likely share some additional information about their new 64-layer 3D V-NAND which was revealed at Flash Memory Summit last month. This of course could be accompanied by a showcase of some possible future products in the pipeline which will use the new NAND. Given the huge die capacities of 64-layer 3D V-NAND, we could see drives with massive capacities come down the pipe. Of course, Samsung could always surprise us with something entirely new as well. We’ll see.

Speaking of we’ll see, we’ll be in Seoul, Korea to cover the event next week, so keep your eyes peeled for updates. As always if you have any questions, drop them in the comments below. We’ll be talking to numerous Samsung representatives over the course of the 2 day event and would be happy to try to get all your questions answered.