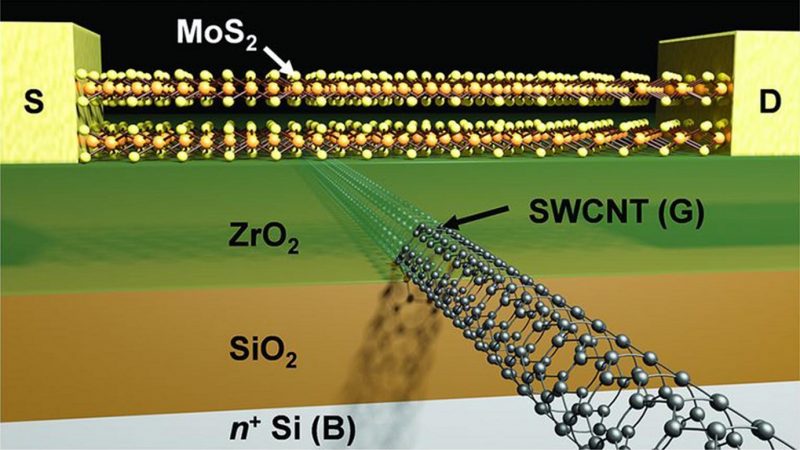 Back in 1965, Intel co-founder Gordon Moore famously observed that the number of transistors in an integrated circuit would double every two years. Up until recently, this has been the case however, with transistors now reaching just a mere 14nm, even chip giants such as Intel are beginning to have issues. While development has become significantly tougher, chip makers are certainly continuing development with TSMC recently announcing that 2nm development will begin shortly. (For reference, a strand of human DNA is just 2.5nm in diameter.)

Given the difficulties of producing semiconductors at sub-10nm feature sizes, 2nm already sounds like an impossible challenge, but according to a recent report published in Science, a team of researchers at Berkeley National Laboratory was able to build a working transistor with a 1nm gate.

Engineers have often regarded that 5nm would be the point where it would be too small to continue building transistors out of silicon. At that feature size, a phenomenon called quantum tunneling would occur where the gate would not be able to prevent electrons from seeping through. As such, the team at Berkeley Lab devised a way to use MoS2, or molybdenum disulfide, instead of silicon. MoS2, a material commonly used as an anti-friction agent in various semi-synthetic motor oils, when used in a transistor helps slow down atoms which prevents them from tunneling through the gate.

With the tunneling issues solved, researchers had to also devise a way to produce the 1nm gate. Traditional lithography techniques don’t support 1nm transistor gate production, so the team used carbon nanotubes instead which just so happens to be available in diameters as small as 1nm.

While the research team has absolutely made some huge strides in 1nm transistors development, they do emphasize that it’s still just a proof of concept. In order to commercialize such a product, billions of these transistors still need to be packed into a chip which is a completely new feat entirely. That said, if this technology pans out, we may be on our way to extending Moore’s Law at least for one more generation to come.