The ongoing legal battle between Qualcomm and Apple is getting hotter by the day. According to a recent announcement by Qualcomm, the company filed a Patent Infringement Complaint against Apple, alleging that Apple breached six Qualcomm patents for the iPhone.

Most of the six patents mentioned in the complaint pertains to power saving features of Qualcomm’s baseband processor. In an infographic included with the press release, Qualcomm details each of the six patents and states that Apple have been using these technologies without paying for them. 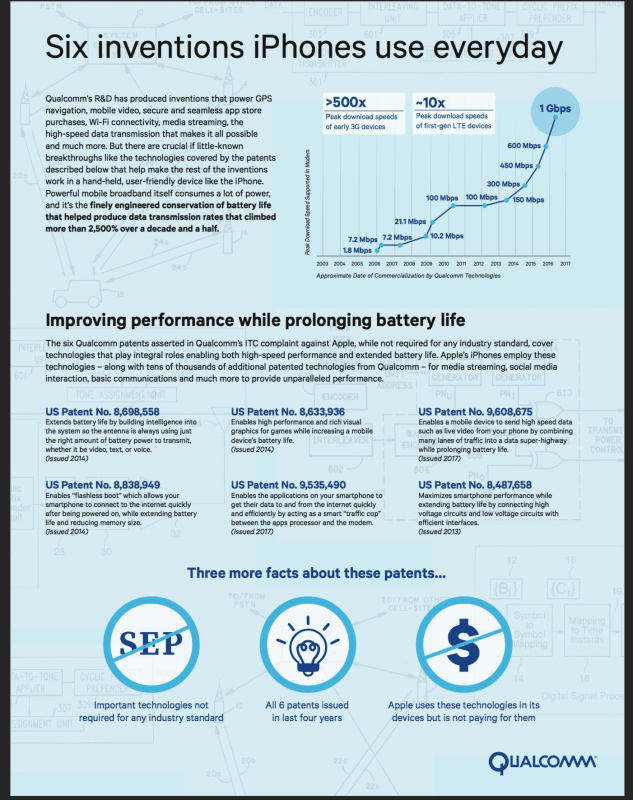 In the meantime, Qualcomm demands that a Limited Exclusion Order (LEO) to be issued to Apple. The LEO would impose a ban on importation of affected iPhones and prevent Apple from using any technology patented by Qualcomm. Additionally, Qualcomm is seeking a Cease and Desist Order to bar all marketing, advertising, demonstration, warehousing, and distribution of all iPhones that use Qualcomm’s baseband technologies.

Qualcomm and Apple have been locked in a fierce legal battle since the beginning of this year. Apple alleged Qualcomm of abusing its dominance in the market and bullying companies into paying high royalties. Qualcomm claims that Apple is attempting to low-ball the cost of using its technologies. Apple has recently stated that it would stop paying Qualcomm royalties and requested that its partners do the same.