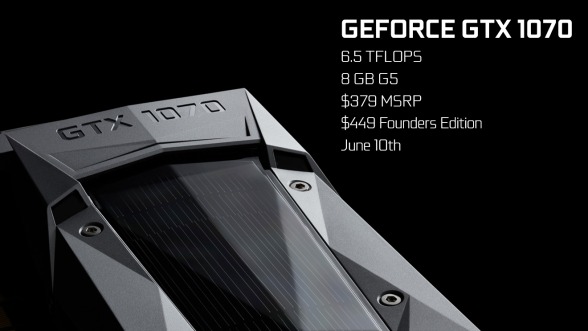 While NVIDIA’s new king, theGeForce  GTX 1080 went on sale worldwide on May 27th, many potential buyers were waiting to see the value offered by the less expensive GeForce GTX 1070, before making a decision. Well, today a slew of reviews for NVIDIA’s new prince have been released, and performance is definitely better than we expected. Reviews from some of our favorite place the GTX 1070 at roughly 20% slower (even less depending on resolution) than the GTX 1080 in most modern games, and as much as 15% faster than the GTX 980 Ti, which makes NVIDIA’s GeForce GTX 1070 one of the best value propositions  available.

Many of our readers were waiting on the results from GeForce GTX 1070 testing to decide which new NVIDIA product was going to be best for them. The GTX 1070 is more than $200 less expensive, if you are using the MSRP prices, and that is a significant amount that you could use to invest in your display, processor, storage or maybe an HTC Vive. In my experience with the new card, it is more than capable of running your 1080p or 2560×1440 display without a problem but for gamers serious about the move to 4K, the GTX 1080 performance advantage is likely going to be worth the cash. For everyone else, the GTX 1070 looks like the card to get, balancing performance, cost, power and features unlike any graphics card before it!

The GTX 1080 really did impress me with its feature set and gaming capabilities but the GTX 1070 takes my opinion about this new architecture to the next level since it mixes in a great dose of affordability. Unlike the GTX 970 –the card ostensibly being replaced by the 1070- it is perfectly capable of playing most games at 4K without any hitches and also happens to be very well equipped for forthcoming DX12 titles. While I can’t outright recommend the Founders Edition due to it foisting an unnecessary premium upon early adopters, the GTX 1070 itself will likely prove to be one of the best values in the graphics card market for a long, long time.

Here are some more of our favorite reviews from around the interwebs.