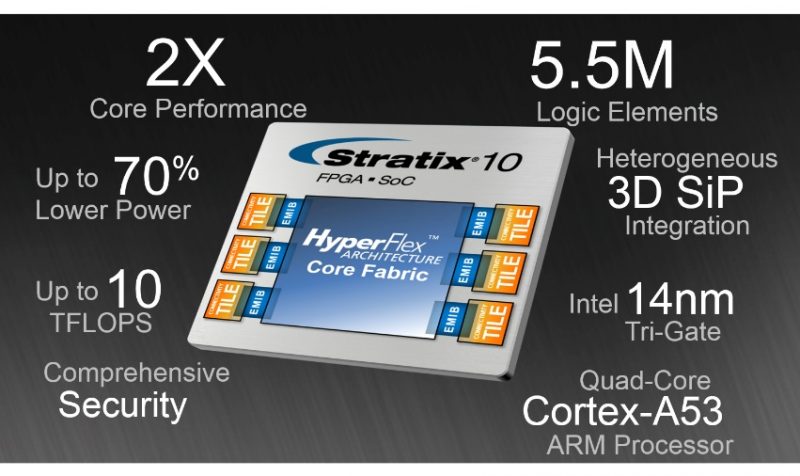 According to a recent announcement, Intel is now sampling the Stratix 10 FPGA (Field Programmable Gate Array).

The Stratix 10 FPGA , which was acquired by Intel as a part of their $16.7 billion acquisition of Altera back in 2015, was at the time Altera’s most ambitious high performance FPGA design ever. Utilizing Intel’s 14nm tri-gate process along with an innovative new HyperFlex architecture, the Stratix 10 FPGA is capable of up to 10 TFLOPS of single-precision floating point DSP performance which amounts to about ~2x the performance compared its predecessor. The Stratix 10 FPGA also offers 70% better power efficiency and up to 1TBps (128GB/s) memory bandwidth thanks to an integrated HBM2 package.

When Intel first acquired Altera, it was originally believed that Intel wanted to combine x86 processing with FPGA by integrating a FPGA into their Xeon CPU lineup. While that didn’t happen just yet, the Stratix 10 FPGA with its ARM based processor is a solid step towards integrating microprocessors and FPGA.

More information on the Stratix 10 can be found in Intel’s whitepaper here.