Yeah, I know Ivy Bridge isn’t even out yet, but what the heck might as well talk about whats coming next year.

Anyway, if you haven’t heard, Haswell is expected to be the successor to Intel’s Ivy Bridge processors which are expected to be released in April. So far, the rumor-mill is predicting that Haswell will bring a lower TDP, CPU performance gains, higher overclocking headroom as well as iGPU performance gains. Intel, as usual, is also expected to introduce socket 1150 along with Haswell. Details on compatibility between current 1155 motherboards and the new Haswell CPUs are unknown at this time.

Based off a leaked Intel roadmap over at DonanimHaber (below), Intel’s Haswell is expected to arrive between March and June of 2013. Another interesting tidbit is that it seems like Intel isn’t planning on releasing any replacements for LGA 2011 processors, which means the Core i7-3960X should be performance king for some time to come. 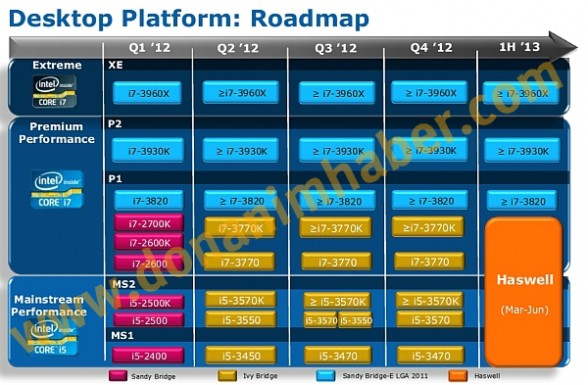 As usual, I’d still take all leaks with a grain of salt, but it’s nice to have an idea of what’s coming and when.