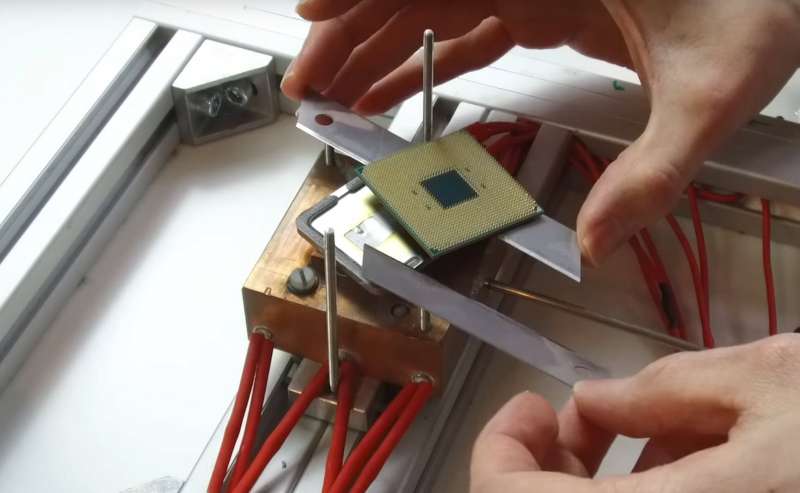 Ever since Intel’s Ivy Bridge CPUs launched back in 2012, Intel has consistently caught flak for using cheap TIM (Thermal Interface Material) to interface the CPU die with the IHS (Integrated Heat Sink). This unfortunately created a necessity for those looking for even decent overclocks to have to remove the IHS, or de-lid the CPU.

With AMD’s Ryzen CPU launching soon, many have wondered what type of TIM (Thermal Interface Material) AMD is using with their upcoming processors. In a recent video posted to YouTube, German overclocker der8auer not only demonstrates how to de-lid an AMD Ryzen 7 1700 CPU, but also provides us with the good news that AMD is using solder as the interface between the CPU and the IHS (Integrated Heat Spreader).

In the video, we can see that AMD is using Indium solder along with gold plating to help provide the best thermal conductance possible. As a result, de-lidding may not be necessary for AMD’s Ryzen CPUs. Of course, no thermal conductor would be as good as going direct to die, but the risk involved may not be worth it to all but the most hardcore overclockers.

Those interested in de-lidding their brand spanking new AMD Ryzen CPU can check out the video below. The process isn’t difficult, but does require some sort of heat plate to melt the Indium solder and some steady knife skills to remove the IHS without bending any of the pins.