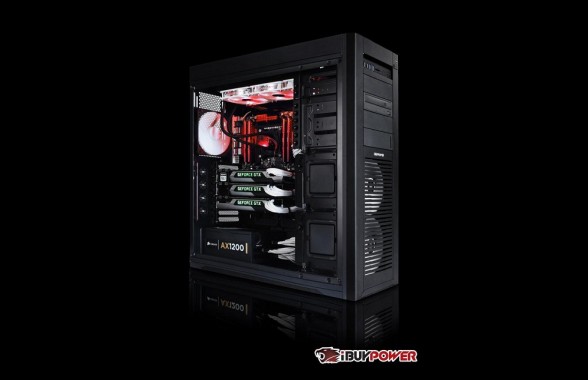 Prepare yourself for the highest levels of cutting-edge performance. iBUYPOWER is proud to announce the availability of NVIDIA’s latest graphics beast: the GeForce GTX TITAN.

The new GeForce GTX TITAN is a single-GPU solution that’s unlike anything else on the market. Coupled with a monstrous 6GB of GDDR5 video memory, GeForce GTX TITAN provides thrill-seeking gamers with unrelenting power.

“We know that gamers continue to demand the most from their systems, and providing our customers with the ability to build their performance systems with NVIDIA’s new GeForce GTX Titan is something we believe they will love,” said Darren Su, Vice President of iBUYPOWER, “and we’re really excited about putting GTX TITAN in some of our most unique systems, like Revolt.”

iBUYPOWER recently shook the PC gaming industry with the launch of the Revolt, the company’s daring take on PC system design. Despite its highly integrated and slim form factor, Revolt is fully GeForce GTX TITAN ready. But it doesn’t stop there. A wide variety of systems is supported, including many of iBUYPOWER’s custom gaming desktops. With larger gaming systems, customers will be able to take advantage of blistering performance by harnessing SLI.

Check out how you can configure an iBUYPOWER gaming system with the GeForce GTX TITAN here.