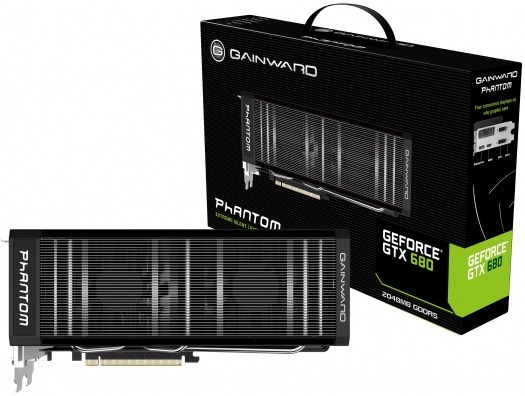 Gainward, a global graphics card manufacturer, recently unveiled their latest creation – the Phantom GTX 680 4GB. As the name suggests, the Phantom GTX680 4GB will feature 4GB of onboard memory, making Gainward one of the first manufacturers to release a GTX 680 with this much onboard memory. As expected then, the card will be able to simultaneously support up to four monitors.

Also attached to this card in addition to the massive amount of memory is the massive Phantom II cooling solution. The Phantom II cooler features two 80mm silent PWM “GR8” fans, five 6mm “Grand-Prix” heatpipes, and sports a more advanced design in comparison to the previous generation Phantom cooler. According to Gainward, the cooler will be 11.5dB quieter and 6°C cooler when compared to the stock GTX 680 cooler.

The card will be clocked at the standard 1006MHz base and 1058MHz “boosted”. Memory will be clocked at 3004MHz with an effective memory clock of 6008MHz. The graphics card will also include Gainward’s Expertool Utility II for additional overclocking, and fan speed control for either performance mode or silence mode.

It is the first 4GB board base on NVIDIA Kepler architecture that you can buy from the shelves. The massive memory gives it far beyond the limitation of the memory when running the latest game titles. With the Phantom II cooler, it is almost the most silent air-cooled board in the market you can find.

Thanks to 4GB on board memory, Gainward GeForce GTX 680 Phantom 4GB can reduce data transfers by keeping larger data sets in local memory to maximize performance. Especially for those games with multi-monitor configuration even for 3D VISION Surround system, the 4GB on board memory will provide unlimited energy for you to enjoy the lifelike gaming environment.

Gainward Expertool II utility
Gainward’s new Expertool utility is a right tool for GTX 680’s dynamic clocking to tap into this powerful board. Users can utilize this new tool to enjoy the experience of the performance enhanced and quiet gameplay.

QuattroPorts
The QuattroPorts supports up to four displays in the same time on a single GTX 680. Gainward GeForce GTX 680 Phantom 4GB also comes with a HDMI to DVI adapter for the users to enjoy NV Surround with three DVI monitors.