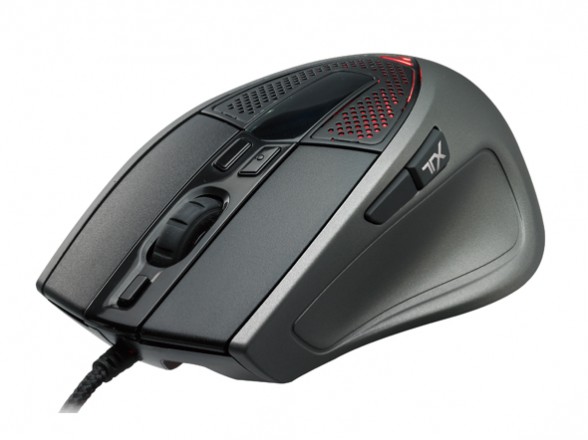 As you can tell from the name, the CM Strom Sentinel Advance II gaming mouse will be the successor to the CM Storm Sentinel, which was one of Cooler Master’s first entries to the gaming peripherals market. The new Sentinel Advance II will feature some pretty high end features for a gaming mouse such as the Avago 9800 laser sensor (capable of achieving over 8,000DPI), 128KB of onboard memory, ultra low liftoff distance, customizable color LEDs, on the fly DPI adjustment, large palm grip, and a modular weight system.

Of course, tracking precision and speed are dependent on two things – the mouse itself and the surface it’s used on. That’s why Cooler Master has also introduced a new mousepad, the Speed-RX, to make sure you’re using a proper surface. According to Cooler Master, the Speed-RX is a synthetic mesh based mousepad which contains nano fibers specifically designed for high end laser mice, such as the Sentinel Advance II.

Both the Sentinel Advance II and the Speed-RX will be available March 2012. Considering there’s only a couple days left, you probably won’t need to wait too long to get one either. Unfortunately, pricing on both products are still unknown at this time.