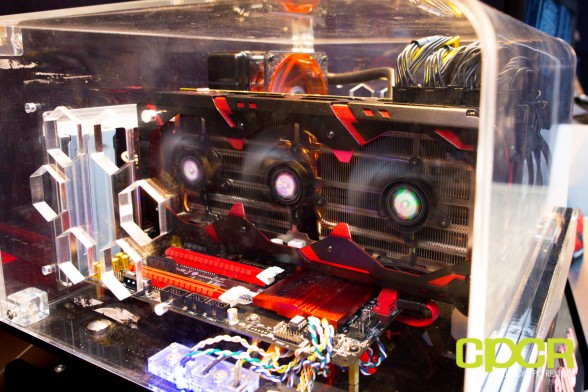 Computex this year wasn’t exactly filled with new GPU announcements, but one interesting new GPU comes from the guys over at PowerColor who displayed some working samples of their latest Devil 13 Dual Core R9 290X graphics card.

Earlier this year, AMD introduced the Radeon R290X2 which put two Radeon R9 290X GPUs on the same board, but rather than going with a traditional air cooler, AMD decided to use an AIO water cooling system to handle the increased heat load. PowerColor’s new Devil 13 Dual Core R9 290X removes the AIO water cooler in favor of a triple slot cooler which gives users who want a dual Radeon R9 290X graphics card but for whatever reason aren’t interested in the AIO water cooler offered by the AMD reference design.

In addition to the custom cooler, PowerColor has also redesigned the PCB for the Devil 13 Dual Core R9 290X giving the graphics card a massive 10+2+3 phase power delivery system, PowerIRstage digital PWMs, supercaps and voltage check points. The card is powered by a whopping four eight pin power connectors to ensure that there’s ample power being delivered to both GPUs for those planning on further overclocking the card.

Pricing on the Devil 13 Dual Core R9 290X is expected to be around $1,500 when it launches within the next couple of weeks. PowerColor will also include a Razer Ouroboros gaming mouse along with the graphics card for extra value add as well. 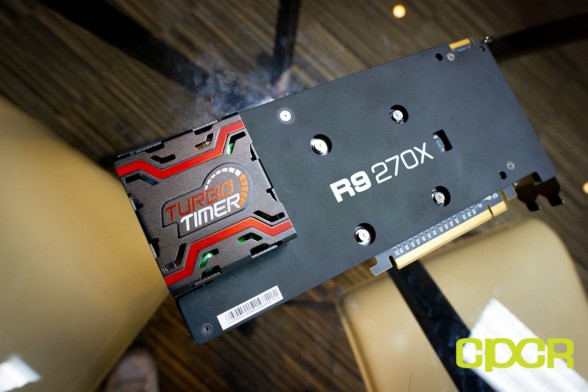 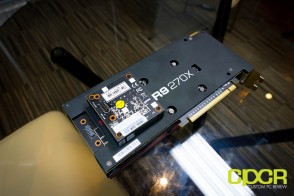 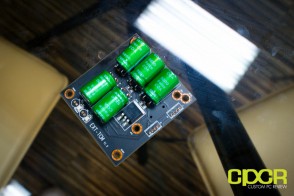 In addition to the Devil 13 Dual Core R9 290X, PowerColor also displayed what they call Turbo Timer. The Turbo Timer is essentially a set of capacitors that connect with special PowerColor graphics cards via a set of proprietary pins (currently only the R9 270X PCS+). These capacitors are designed to keep the fans on the graphics card running for a small amount of time after a computer is turned off. PowerColor believes that by running the fans for a small amount of time after the graphics card is turned off, heat trapped within the heatsink and the surrounding area can be better dissipated to aid in long term longevity of the card.

No word on pricing or availability at this time, but the Turbo Timer is expected to be available as a standalone product as well as a bundle with the R9 270X PCS+ when it becomes available.