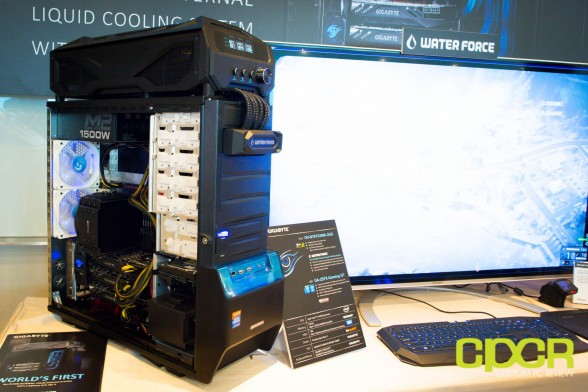 In recent years, CPU all in one (AIO) water cooling has become quite popular with system builders for its ease of use and superior performance over air cooling, and recently GPU AIO water cooling is beginning to gain traction as well with AMD’s latest flagship Radeon R9 295 X2 being one of the first graphics cards to include an AIO water cooling system in its reference design.

While AIO water cooling is a fantastic solution for single GPU setups, where it really shines is in multi-GPU configurations where cards are stacked on top of each other with very little room to breathe. For users stuck in situations like these, Gigabyte wants to make it easy for users to purchase their very own AIO water cooled  tri-SLI Nvidia GeForce GTX 780 Ti setup using a new product they’re calling “Water Force”.

Water Force is a fairly simple concept in that it’s essentially three separate AIO water cooled GeForce GTX 780 Ti’s with their own loops and their own 120mm radiators. After the GPUs are installed, users simply need to route the 120mm radiators through an optical drive bay where it rests in an external radiator housing unit which will also comes with the Water Force package. The external radiator then monitors temperature and allows for adjustments in pump and fan speeds. The beauty of the system is that it’s dead simple to put together and is maintenance free making it quite appealing for users who aren’t comfortable building their own water cooling loops or system integrators looking for an easy way to provide systems with water cooled GPUs.

Three flagship GPUs, one external radiator housing, fan controllers, etc. aren’t cheap and Gigabyte expects this setup to cost around the $3,000 mark when it launches in the future.