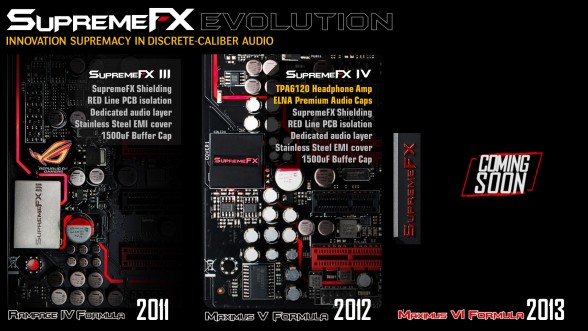 Our team recently received a mysterious e-mail today from the guys over at ASUS which contained this image teasing the audio solution on the Maximus VI Formula.

For those who remember the SupremeFX III audio solution on the ASUS Rampage IV Formula, it was the first time any of the major motherboard manufacturers put serious effort into improving onboard audio. By integrating features such as PCB isolation, EMI covers, and buffer caps, ASUS was able to significantly improve sound quality by reducing digital interference and cleaning up power delivery.

With the SupremeFX IV on the Maximus V Formula, ASUS went a step further and integrated ELNA premium audio capacitors as well as a headphone amp to provide those with audiophile grade headphones the ability to use them without purchasing 3rd party amplifiers or sound cards.

With Maximus VI Formula, ASUS is hinting that they’re planning to introduce yet additional upgrades to the SupremeFX audio, which once again brings it one step closer to a true, discrete audio solution. Anybody have a guess at what it’ll be?