Just got wind of this new article over at CPU World with a roadmap of the Radeon 7000 series leaked from what appears to be from MSI. 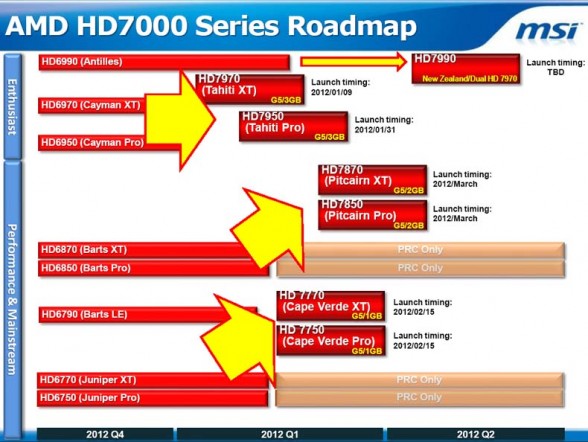 Next month, we’re expected to see the launch of the “Performance & Mainstream” class (Probably more mainstream than performance…) HD 7770 and the HD 7750, both of which are expected to launch simultaneously on 02/15/12. These GPUs will be codenamed Cape Verde Pro/XT and will both feature 1GB of GDDR5.

In the following month (March), on a still unknown date, we should also see the launch of the “Performance & Mainstream” class (Probably more performance than mainstream) HD 7870 and the HD7850. These GPUs will be codenamed Pitcairn Pro/XT and will both feature 2GB of GDDR5.

Additionally the HD 7990 is expected to launch sometime as well. Sometime being the key word here since it’s still labeled as TBD.

We’ll keep you posted if anything else pops up.