It’s been over a year since AMD first launched their first generation Llano APUs which brought with them solid CPU/GPU performance and power efficiency on a single die, and it looks like AMD’s is now releasing their new highly anticipated second generation APU, codenamed Trinity. The Trinity APU will be based off the new Piledriver microarchitecture, so we’ll be expecting to see improvements in both clock frequency as well as instructions per clock. 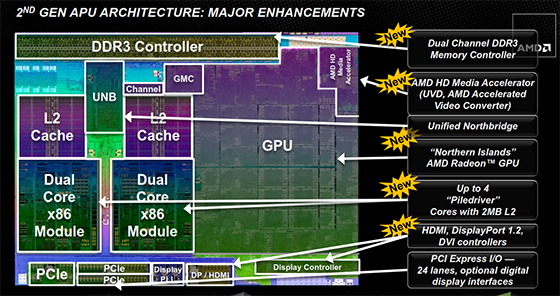 That said, the main changes from the Llano to Trinity is the switch to Piledriver x86 module which is derived from the desktop based Bulldozer CPUs. This means higher clock speeds starting at a base clock of 2.3GHz and turbo up to 3.2GHz. We’ll also see a drop in TDP which will put the dual core Trinity APUs at 17W and the quad core chips at 35W. AMD is also promising a 28% CPU and 58% GPU performance leap from the last generation Llano processors. Additionally, AMD is also claiming an improvement in GPU performance along with the inclusion of some additional media related features such as AMD’s HD Media Accelerator suite.

For more info you can visit the AMD webiste or feel free to start a discussion on our forums. For now, only the mobile edition of the Trinity APUs designed for ultra sleek and slim notebooks will start to become available with the desktop versions following suit in the coming months.

The 2nd-Generation A-Series APU, codenamed “Trinity”, is a grounds-up improved design over the previous generation, enabling a best-in-class PC mobility, entertainment, and gaming experience. New features of the product design include:

“The latest OEM notebooks, ultrathins, All-in-Ones and desktops based on the new AMD A-Series APU enable the best video and gaming experiences, highly responsive performance with AMD Turbo CORE, and accelerate an ever-increasing range of productivity and multimedia applications — in sleek, stylish designs at price points that make sense,” said Chris Cloran, corporate vice president and General Manager, AMD Client Business Unit. “Our 2nd-Generation AMD A-Series APU is a major step forward in every performance and power dimension, allowing users to enjoy a stunning experience without having to give up the things that matter to them most. This experience doesn’t stop at mainstream notebooks. It carries over into affordable ultrathin form factors featuring the latest in AMD Radeon™ graphics.”

The developer ecosystem continues to gravitate to the unmatched level of compute and unique processing capabilities of the APU as more than 100 applications and games are now accelerated by AMD APUs.  The 2nd-Generation AMD A-Series APU gives users superior Web-based video experience thanks to plug-ins for Google Chrome, Firefox and Internet Explorer 9 that make it easy for consumers to turn on AMD Steady Video technology.6Recent applications that have been optimized for use on AMD A-Series APUs include Adobe Photoshop CS6, WinZip 16.5 and VLC Media Player. AMD A-Series APUs are also well-positioned to take advantage of the upcoming transition to the Windows® 8 operating system.

“We are excited for the introduction of the 2nd-Generation AMD A-Series APU and are confident it will continue the great work Microsoft and AMD have done together on the A-Series APU,” said Aidan Marcuss, senior director, Windows Business Planning, Microsoft Corp. “We look forward to seeing the A-Series APU in action with Windows 8 to deliver a great user experience across a variety of hardware.”

For developers who want to engage in the industry’s move toward heterogeneous computing, the upcoming AMD Fusion12 Developer Summit will offer them a unique opportunity to enhance their knowledge base. More information on AFDS can be found here.

With more than 12 hours of ‘resting’ battery life, AMD is now an industry leader in notebook battery-life performance. The 2nd-Generation AMD A-Series APU delivers increased levels of performance, while consuming half the power as its predecessor.

These gains can be attributed to the new power-optimized “Piledriver” CPU core, as well as to AMD Start Now technology, which is designed to maximize system responsiveness by quickly entering and exiting low power states. With AMD Start Now, the computer resumes from sleep mode in as few as two seconds and boots to the desktop in as few as 10 seconds.7

In ultrathin form factors, AMD enables an uncompromised visual experience thanks to a power-efficient and premium AMD Radeon graphics engine. Consumers can expect to see ultrathin notebooks based on dual-core 17-watt and quad-core 25-watt AMD A-Series APUs. These products will be easily identifiable by aluminum-styled VISION Technology stickers at a range of competitive price points.

As more and more people turn to their computers as the hub for their entertainment, the visual aspect of computing becomes ever more important. To enhance these capabilities, AMD created the AMD HD Media Accelerator – a unique set of technologies that enable the best video quality on a PC. Key features of the HD Media Accelerator include:

The 2nd-Generation AMD A-Series APU builds on AMD’s legacy of gaming leadership with an increase in graphics performance of up to 56% over the previous generation4 and support for:

AMD has a record number of design wins with companies like  Acer, Asus, HP, Lenovo, Samsung and Toshiba  based on our 2nd-Generation AMD A-Series APUs and VISION Technology from AMD, with mainstream and ultrathin notebooks as well as embedded solutions, available beginning today.

Desktops systems and component channel parts will be available later this year.