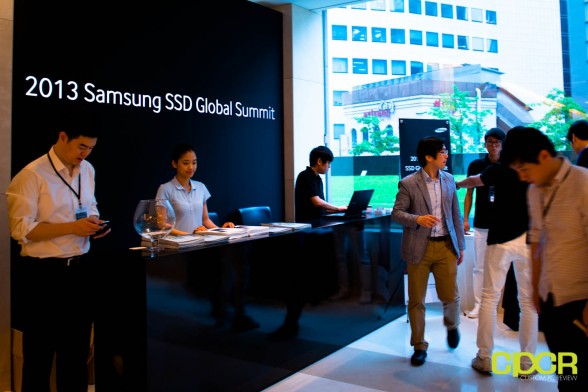 The Samsung 840 Evo is Samsung’s latest entry level SSD, which will be replacing the standard Samsung 840 in the coming days. The latest SSD will be feature Samsung’s latest 1xnm class TLC (3 bits per cell MLC) Toggle 2.0 NAND paired with the new in house MEX controller. This is an upgrade from the Samsung 840’s 21nm TLC NAND paired with the older MDX controller. Samsung is saying that because of the 33% faster controller along with the incorporation of “Turbo Write” technology, the 840 Evo will provide performance of up to 540MB/s reads and 520MB/s writes, making it up to three times faster than the standard 840 depending on the capacity. The new 840 Evo will come in capacities of 120GB, 250GB, 500GB, 750GB, and 1TB. The new 750GB and 1TB capacities will be the largest Samsung consumer SSDs (in capacity) on the market to date.

Pricing is expected to be similar to the 840 and should be available stateside in early August this year.

Samsung Electronics Co., Ltd., the world leader in advanced memory technology, today held the 2013 Samsung SSD Global Summit at the Westin Chosun Seoul in celebration of the launch of its new solid state drive (SSD), the Samsung SSD 840 EVO. Along with the announcement of its latest SSD and under the theme of “SSDs for everyone,” the Samsung SSD Global Summit also explored the future of the global SSD market, which is quickly replacing the hard disc drive (HDD) market.

“After accelerating the growth of the SSD market with last year’s launch of entry-level, high-performance SSDs, we are introducing much faster SSDs with up to 1TB capacities offering consumers a wider range of choices,” said Young-Hyun Jun, executive vice president, memory sales & marketing, Samsung Electronics. “Samsung continues to enhance its SSD brand image by delivering the industry’s highest quality solutions and continuously increasing its SSD market share by expanding the adoption of higher density SSDs especially in client PC segments.”

At this year’s event, Samsung unveiled new high-performance, high-density SSDs. Among the highlights were the 840 EVO, a consumer-oriented entry-level, high-performance SATA based SSD offering up to 1TB capacity.

As part of its strategy to expand into the consumer market and further popularize SSDs, Samsung plans to initially introduce the Samsung SSD 840 EVO to major global markets in early August. Samsung will expand into additional markets at a later date.

At this year’s Samsung SSD Global Summit, approximately 150 global business press, consumer media and power bloggers from twelve countries were invited, allowing Samsung to introduce high efficiency SSDs to global consumers and show participants just how simple it is to install and utilize SSDs in their notebooks.

Compared with the 250GB 840 Series SSD, the highest selling capacity of the 840 lineup, the new 250GB 840 EVO now delivers 520MB/s sequential write speed – making it more than two times faster than the previous generation. In the case of 120GB model, the 840 EVO achieves up to 410MB/s sequential write speed, which is approximately three times as fast as that of the 120GB 840 Series SSD.

For the 1TB 840 EVO SSD, the sequential read/write performance has reached 540MB/s and 520MB/s. Furthermore, both the random read and write performance have improved, reaching 98,000 IOPS (Input Output Operations Per Second) and 90,000 IOPS, respectively. This significantly enhances the user’s real-world computing experience, especially when he or she is dealing with very large data files.

The Samsung SSD 840 EVO line-up is available in five capacities: 120GB, 250GB, 500GB, 750GB, and 1TB, supporting a wide range of computing environments and IT applications. It has also significantly narrowed the capacity-induced differences in performance, which gives consumers a broader spectrum of devices to choose from.