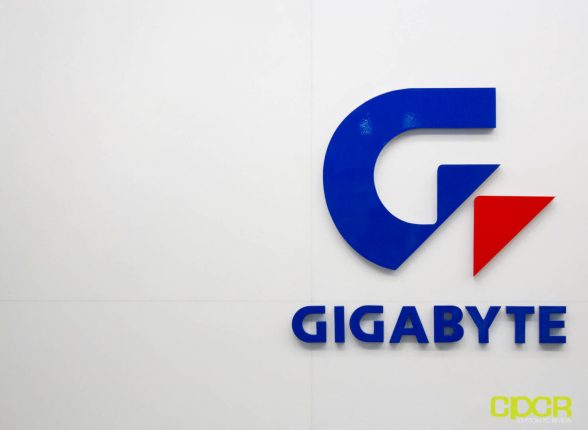 For Computex 2016, we had the opportunity to tag along with Gigabyte to tour their Taiwan factory. Gigabyte’s pretty excited to show us exactly why they’re so confident in the quality of their motherboards. 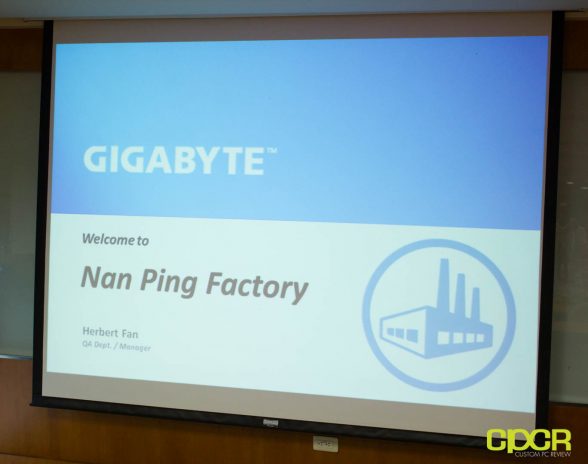 Gigabyte’s factory in Taiwan is actually located in Nan Ping. It covers an area of 45,000 square meters and while it’s a relatively large factory, it isn’t the biggest factory Gigabyte owns. Gigabyte also has two more factories in mainland China, with the biggest being 60,000 square meters. This is however perceived as the “premium” factory as many OEMs specifically request components manufactured in Taiwan instead of China. 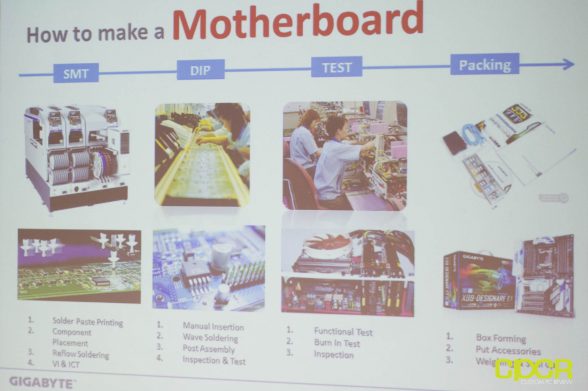 There are four steps in creating a motherboard. SMT, DIP, Test, Packing. SMT mounts the smallest pieces onto a motherboard. DIP requires manual labor to add some larger pieces. All boards are then passed through a rigorous testing stage and once they pass testing, it’s then packed and shipped to retailers. Key to Gigabyte’s quality components is that they have a very experienced staff. Over 70% of its workers have over 15 years of experience. 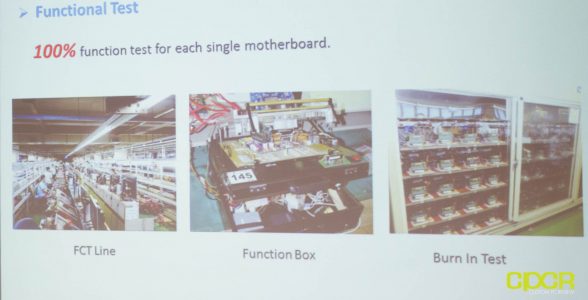 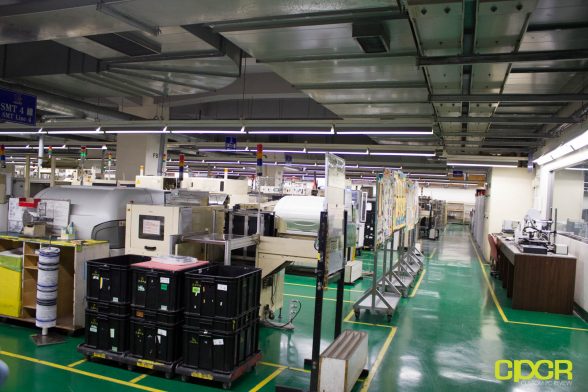 During our tour, the first place we arrived at was the SMT facility where they attach the smaller electric pieces on the motherboard. 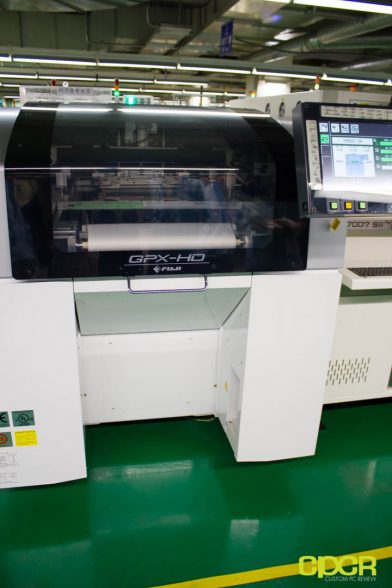 When the bare motherboard arrives at this stage, it’s first passed through a flux machine that applies a layer of flux paste to the surface of the board and preps it for surface mounting. 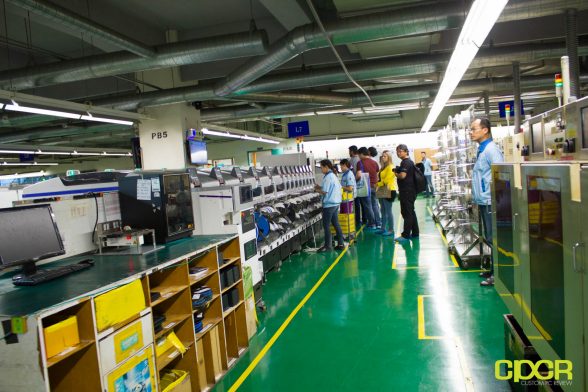 In this shot, reels of electronic components are “stamped” onto the surface of the board. 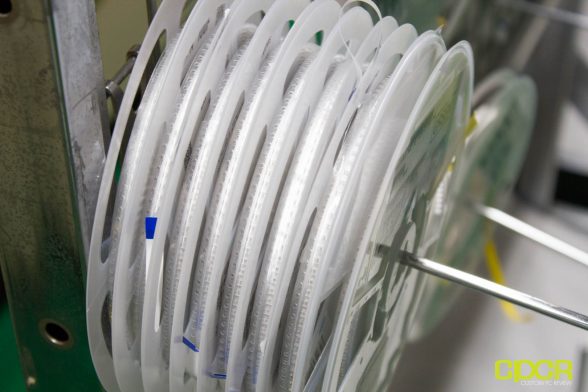 The motherboard passes through several machines that each prints different reels of electronics onto the board. Each reel contains 10,000 pieces. 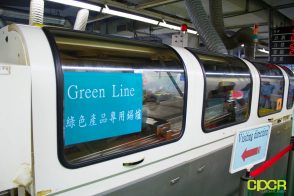 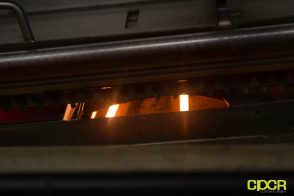 After all the smaller components have been surface mounted, the board is then passed through the baking oven. The oven heats up the board to 260 C, fixating the components in place with solder. The “Green Line” label on the oven roughly translates to “green product only”. We assume that this mean that only products that are RoHS compliant are assembled in this line. 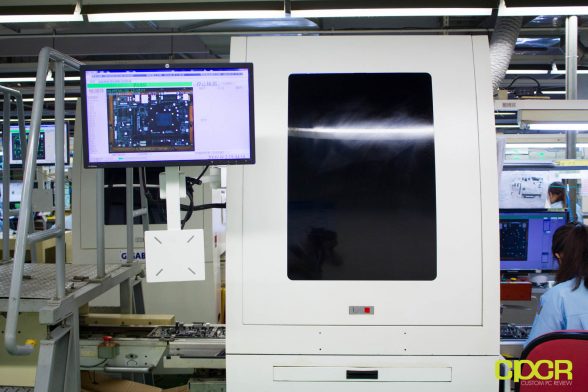 Once baked, the board is cooled and put through an scanning device for preliminary visual quality inspection. 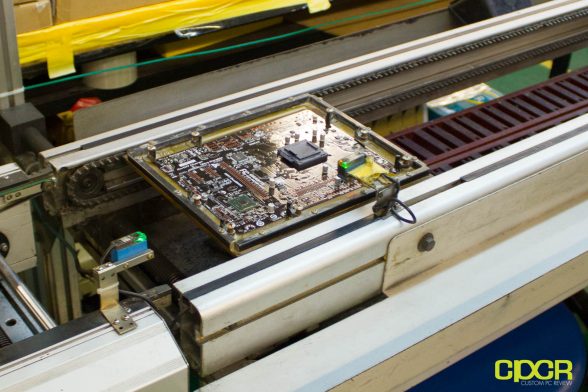 Voila! The naked board without any ports and heatsinks, you can see the motherboard chipset exposed in its full glory. 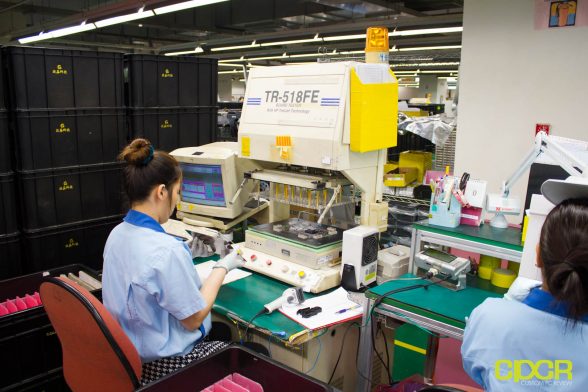 Before the board is passed off to more assembling, it’s put through an circuit check to see if the there are any broken circuits. 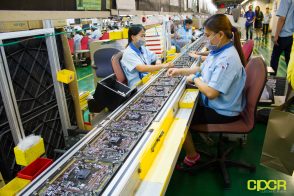 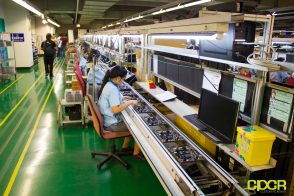 After the SMT process comes with DIP process where the board passes through an assembly line of workers. Similar to the machines in the SMT process, each worker is responsible to place 2-3 components onto the board. These components include motherboard I/O panels, SATA ports, PCI-E ports, etc. Gigabyte representatives explained that each worker is specifically tailored for components that’s “best suited to their strengths”. 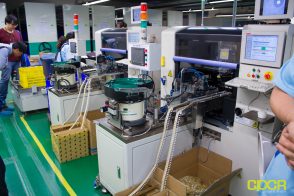 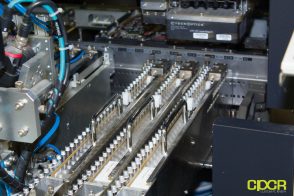 Right before the boards are passed through to the workers, it’s passed through some stamping machines that places some capacitors on to the motherboard. Each of these machines can replace up to 3 workers. The Gigabyte rep told us that Gigabyte is focusing heavily on automation, but one of its biggest barriers to fully automating the process is that each machine can only grab a certain shaped component. With the constant redesign of the heatsinks and other aesthetics components, it’s expensive to implement a specific machine to each. “It’s going to be a long time before we can fully automate” said one of the reps. 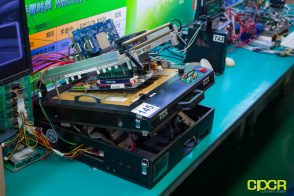 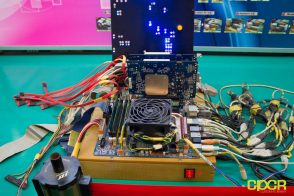 Once fully assembled, each and overboard is subjected to a burn-in test which runs the board in a variety of operating environment for an extend period of time. The shots above depicts of the setups that are used. These setups are usually placed on racks in enclosed environments. 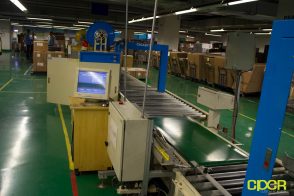 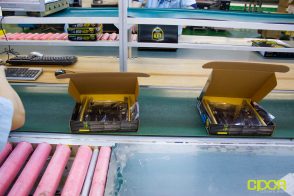 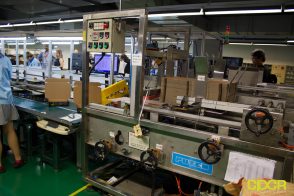 It’s a long journey to the packing facility. The boxes are folded via machines because the manual labor required is simply too extensive. Each box is assigned a serial number that matches that of the board so they can all be traced. This makes identifying batch number easier for trouble shooting and diagnostics. 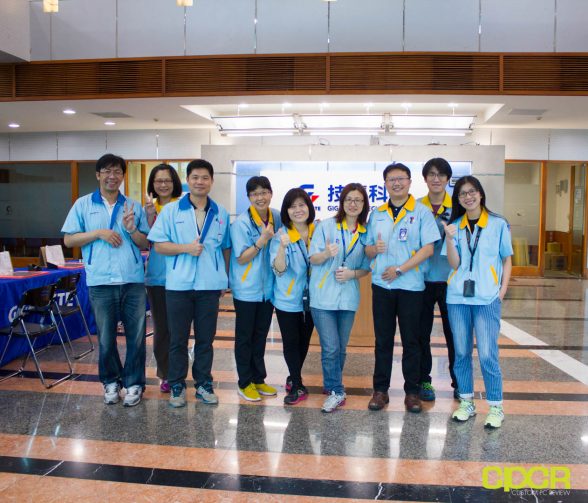 That concludes our tour. Huge thanks to the Gigabyte team and Alan Szeto for making this possible!