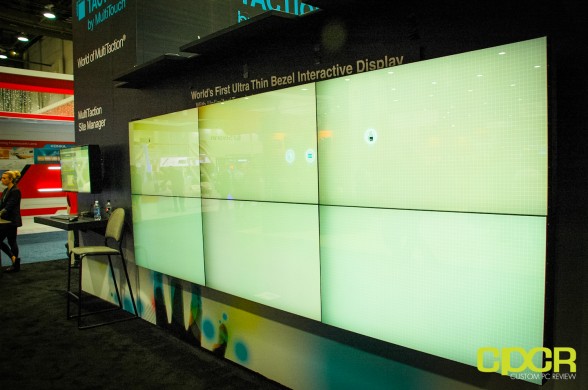 Touch screens have become the norm in today’s technological world and is now a staple in many electronic devices. But like all things tech, touchscreens are constantly being refined by companies all around the world. MultiTouch Ltd. (more specifically, MultiTaction) is one such company, and they definitely weren’t shy to show off some of their big ideas at CES 2013. 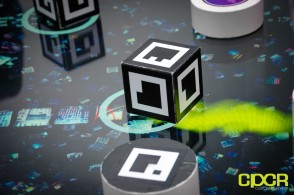 MultiTaction’s boldest concept aims to improve touch screen technology to create something called “Enriched Reality”. According to a MultiTaction spokesperson, an Enriched Reality touch surface will be able to detect any object that interfaces with the touch screen. The magic, said MultiTaction, lies in an intricate combination of both software and hardware. The hardware is based upon an optical infrared system, which allows the touch screen to scan the object interacting with it. This is where the object identification software comes in. MultiTaction has developed the software with enough flexibility and precision be able to make educated guesses on the object placed on it. With this amount of versatility in object detection, it leaves software developers up to the task of imagining how they can utilize the hardware and software MultiTaction has given them to fit their specific need. And for those developers who plan to maintain tens, hundreds, or even thousands of these screens around the world, MultiTaction’s software allows for full remote managing of any and all screens integrated into the management system. The manager could even lock, change, or manipulate each screen remotely to his or her bidding instantaneously. 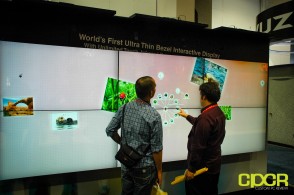 While this technology has been implemented before, MultiTaction wants to take this to another scale. MultiTaction’s first order of business is to implement the new touchscreen in corporate and education environments, revolutionizing presentations and knowledge centers to be central hubs of collaboration rather than independent activities of seclusion. They aim to do this by changing the methods in which we research and change our working space entirely. For research, imagine you have a piece of art you need to study. However, you know very little about how to go about researching art history. With MultiTaction technology, one could simply place the art piece onto the touch screen, have it be scanned, and immediately a database full of information both internally and externally through the internet could be brought up. For presentations, imagine a panel of four individuals on a 165″ wide presentation screen, possible by combining multiple 55″ touch screens together. Each presenter has full access to manipulate any images, documents, videos, or anything they are presenting in a fully touchable environment. If presenter A is talking about something on one side of the presentation and presenter B wants to expand on it, presenter A only needs to throw the object discussed upon along through the screens and presenter B now has full control of the presentation. 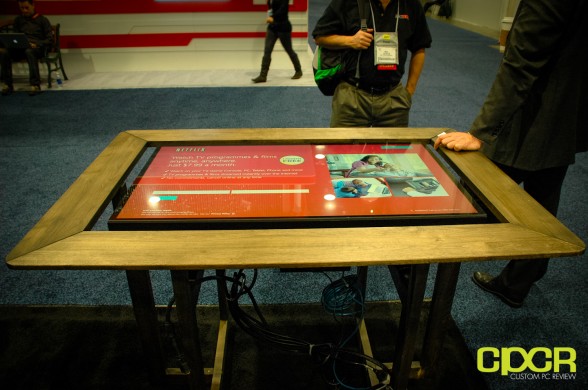 So this is all fine and great in the larger worlds of business and research, but how does this fit in to the home consumer market? Well, right now, it doesn’t, as MultiTaction’s technology isn’t quite ready for the average consumer’s pocket book. However, as with all cutting edge technology, it eventually filters down into the home and as you can see, MultiTaction has already developed their hardware to work seamlessly with Windows 8 and is currently working to interface with Android OS. What this means is that coffee tables no longer need to be mundane pieces of furniture with little purpose other than to place objects. The coffee table can now be replaced by a MultiTaction table, running a full version of Windows 8 and giving you full access to all of the apps developed for the OS. Even better, with multiple users able to touch the screen without congesting the technology, you can now have as many people as you can fit working on the same table space at once. Oh, and in case you’re worried about spilling your drink on your new MultiTaction table, they assured me that somebody has already figured out how to resolve that problem as a prominent bar in Japan has implemented one of these screens and lets their patrons set their drinks right on top of the screen. 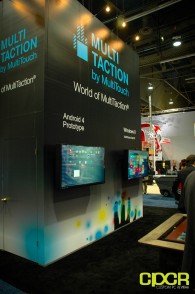 But what about the gamers? Well, as a heavy gamer myself, I couldn’t walk away without asking just how good of a screen these were for us dungeon crawling soldiers. MultiTaction assured me that the current screens in productions are 5ms latency and running at full 1080P for each screen. And for those afraid to be lost in the new wave of 4K and 8K, combining each of these monitors together allows for expansion into the higher Hi-Def realms announced at the show. And with the ultra-thin bezels–6mm to be exact–that makes for quite an impressive gaming experience.

CES is a show all about innovation and progress into a newer, more spectacular tomorrow. MultiTaction was one of those booths that really blew my mind and allowed me to imagine a whole new world filled with devices using this technology. While their main focus was on large, multi-monitor solutions, it is only a matter of time before the macro becomes the micro and we have the same functionality on our phones, tablets, and whatever else comes down the pipeline. As a technological nerd, this booth inspired me in ways that technology seldom does any more and I can only say that I can’t wait until I’m playing Angry Birds on over 150″ of MultiTaction goodness!

For more information about MultiTaction (AKA MultiTouch Ltd.), be sure to check out their website here.