Xigmatek, well-known among cooling enthusiasts as the manufacturer behind the popular Dark Knight S1283W and the Gaia SD1283 cpu coolers, recently introduced a new member to the Prime SD line CPU air coolers, the Prime SD 1484.

The Xigmatek SD 1484 has a tower profile, but is a tad thinner than most tower coolers. The heat sink can mount both 120m fans and 140mm fans. And with elegantly shaped aluminum fins, this cooler looks great.

The included fan looks quite interesting as well. Our sample included one 140mm A1425L12PS fan. The 9 shark fin blades rotate at 900~1200RPM, outputting a maximum airflow of 90.3CMF. 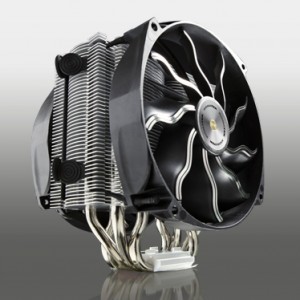 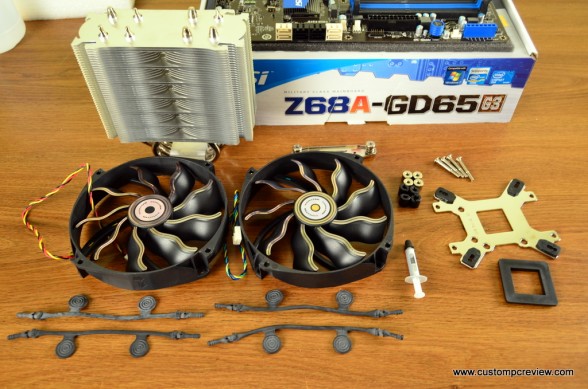 Since we’ll be installing the cooler on an LGA 1155 motherboard, here’s all the parts necessary to do so. This mounting system is pretty similar to others we’ve seen on coolers such as the Phanteks PH-TC14PE. It’s an extremely effective mounting system and it’s very easy to install as well.

The second fan shown in the picture is available for purchase separately. The cooler only comes  with a single fan. 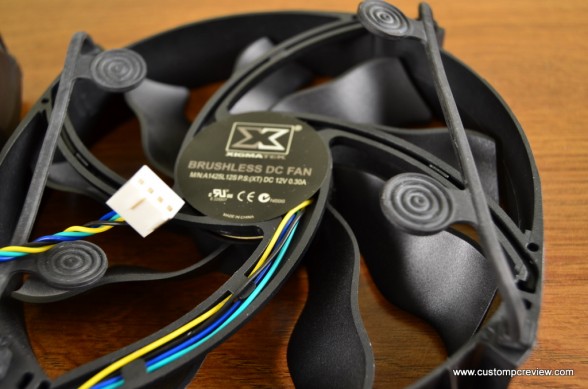 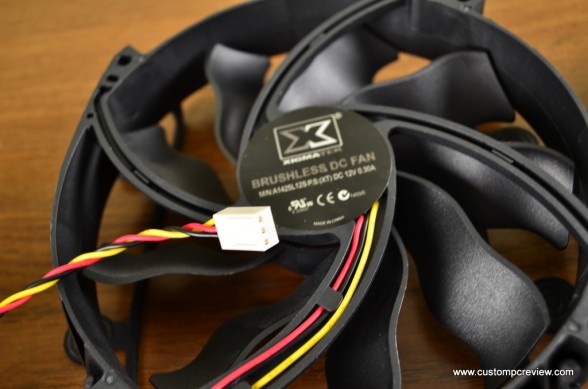 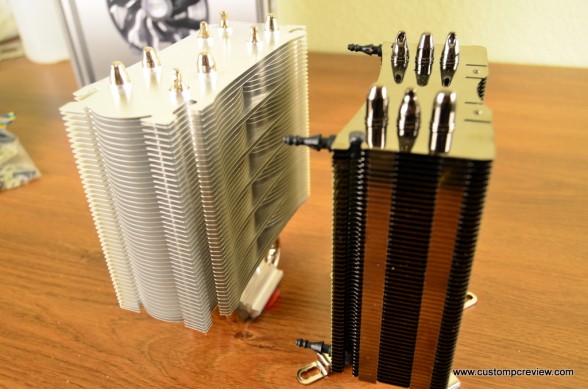 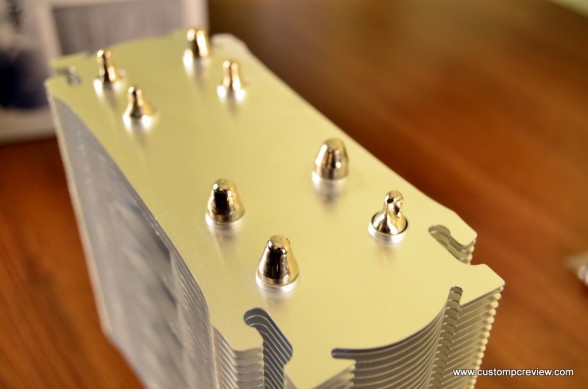 The 4 famous “direct-touch” heat pipes run up the sides of the heat sink. 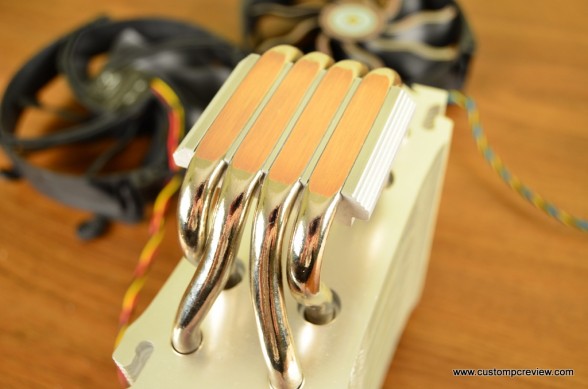 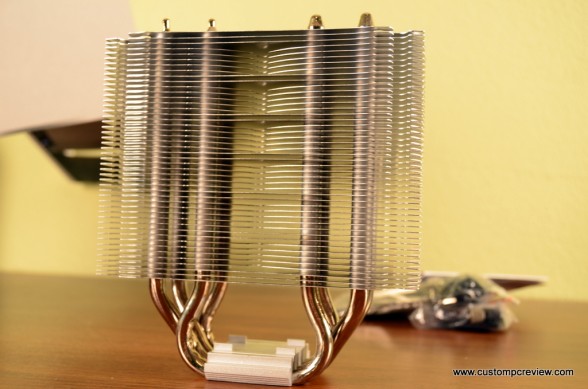 Since the fans have a low static pressure but high CFMs, the aluminum fins are spaced out to allow the least amount of resistance for high airflow. Look at those thick 8mm heatpipes! 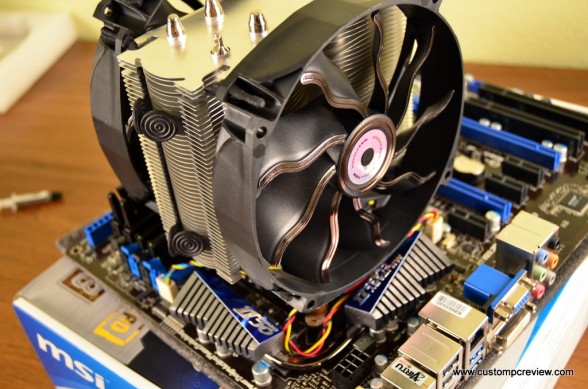 A look at the CPU cooler installed. The fans are attached to the heatsink using a special rubber band which attaches to the fan and loops around the heatsink’s fins. Oh how I love Xigmatek’s unique rubber fan mounting systems. It’s like a surprise every time!

*Note: The picture above is for demonstration purposes only. This is not the test bench used for testing* 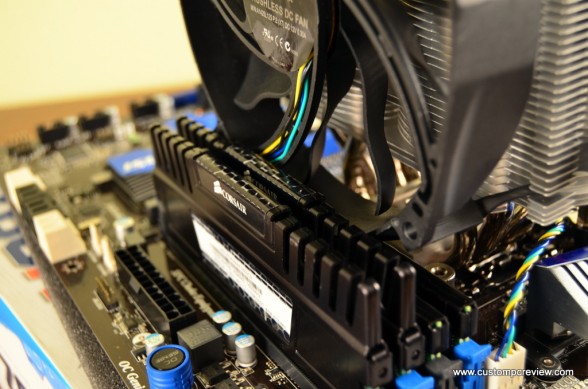 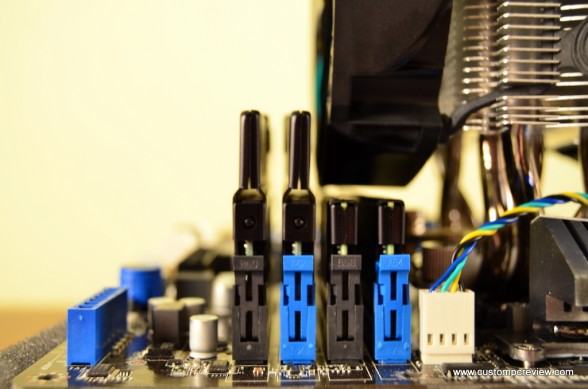 Here’s a look at the CPU cooler installed. On the MSI Z68A-GD65 (G3), the fan covers the first 2 fan slots. If you’re planning on purchasing this CPU cooler, please make sure to purchase low profile memory. The low profile memory we have pictured here is the Corsair Vengeance DDR3 1600 Low Profile.

We’d like to thank HSPC for providing us with the High Speed Tech Station (large) for our test bench.

*All temperatures are measured in Celsius. Best values are bolded

Here we see the Xigmatek Prime providing us with outstanding performance beating out its little brother the Xigmatek Dark Knight, its competitor the Cooler Master V6GT, and Corsair’s H70 water cooler. Unfortunately it wasn’t able to beat out the current air cooling champion, the massive Phanteks PH-TC14PE.

While the Xigmatek Prime SD1484 is already a great cooler with a single fan setup, a second fan was consistently able to reduce temperatures by 1 to 2 degrees Celsius.

Although not completely dominating in terms of raw performance, the Xigmatek Prime SD1484 definitely dominates at its size and price range. The heatsink looks great with the customized aluminum fins and the strangely shaped 140mm fan also performed very well. Compared to the Xigmatek Dark Knight, the Prime SD1484 was  5~7°C cooler in almost all the benchmarks making it a big upgrade for those on the fence between those two coolers. This however is expected as the Dark Knight’s 120mm fan is physically unable to move as much air as the Prime SD1484’s 140mm fan not to mention the Dark Knight’s smaller size.

Installation on Xigmatek coolers have traditionally been very secure and very easy. As expected, the Xigmatek Prime SD1484 is no different.

Additionally, this cooler was able to perform as well as it did without being very loud either. Undoubtedly due to the strange 140mm fan design as well as the rubber fan mounts, the fans ran very quiet. During our testing we ran the fans at maximum speed (1200RPM) and we found the noise only slightly audible especially when compared to the 2200rpm fans of the Cooler Master V6GT and Corsair H70. The Xigmatek Prime SD1484’s fan also features PWM technology which means the fans will ramp up and down based on CPU temperature. At idle loads, the fans were nearly inaudible.

The cooler’s large design prevents you from using the first PCI-E x1 slot on the motherboard. For those using SLI or Crossfire configurations with a dedicated sound card, network card, etc. this could pose a problem.

The cooler’s fan blocks the first two memory slots on the motherboard which means you must purchase low profile memory modules. It would be nice to see the cooler sit a tad bit higher since currently, only the smallest ram modules fit underneath the fan.

While this isn’t an issue of the cooler itself, Xigmatek did ship us one fan with a 4 pin connector and another with a 3 pin connector. (Strangely with the same model number) This essentially defeated the purpose of a 4 pin connector on the first fan since the second fan would run at full speed. Additionally, we didn’t receive a Y splitter to attach the second fan to the same fan header as the first so for those looking to purchase a second PWM fan, make sure it comes with the Y splitter or make sure to purchase one separately.

Overall, the Xigmatek Prime SD1484 is an excellent CPU cooler providing solid performance and silent operation at a very reasonable asking price. It’s currently available on Newegg for $64.99 making it an excellent value especially when compared to the Cooler Master V6GT which currently runs for $59.99.

The Xigmatek Prime SD1484 is currently available on Newegg.