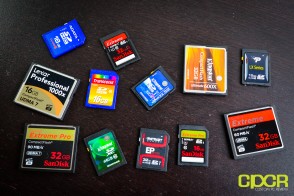 A couple weeks ago, I was talking with a couple colleagues about DSLR cameras, and invariably the topic about high speed SD and CF memory cards came up. What we wanted to know is if a high speed memory card such as the Lexar Professional 1000x CF (Compact Flash) card will actually perform better than a SanDisk Extreme 400x CF card under typical real world conditions. When looking at the price difference between the two cards, the SanDisk Extreme 400X 32GB CF card runs for about $88 while the Lexar Professional 1000x 32GB CF card runs for about $135, that’s a difference of nearly $47!

Since testing only two memory cards seems almost wasteful, I decided to test a couple more memory cards in today’s roundup, so today we’ll be checking out the performance from 13 different memory cards from a number of different popular manufacturers such as SanDisk, Kingston, Lexar, Patriot, and ADATA to see what kind of performance each memory card offers and what can be expected from some synthetic and real world testing.

Before we dive into our roundup, let’s first talk a little about speed class ratings on both SD and CF cards. With SD cards, manufacturers generally rate the cards in three different ways.

Moving onto CF cards, the rating system is much simpler. CF cards generally just use the “x” system, which is the same “x” system used on CD/DVD drives and SD cards. Some CF cards will also use UDMA (Ultra Direct Memory Access) rating, which is actually an interface used in computers prior to the introduction of SATA. UDMA currently ranges from 0 to 7 with UDMA 7 currently topping out at 167 MB/s.

Before we delve any further, let’s take a look at the different SD and CF memory cards we’ll be testing today.

For our synthetic testing today, we’ll be using Crystal Disk Mark 3.0.1 x64 benchmarking software. Memory cards are zero wiped and reformatted prior to any testing. Each memory card is tested using Kingston’s USB 3.0 Media Card Reader (FCR-HS3). Special thanks to Kingston for sponsoring us with the memory card reader for this article! 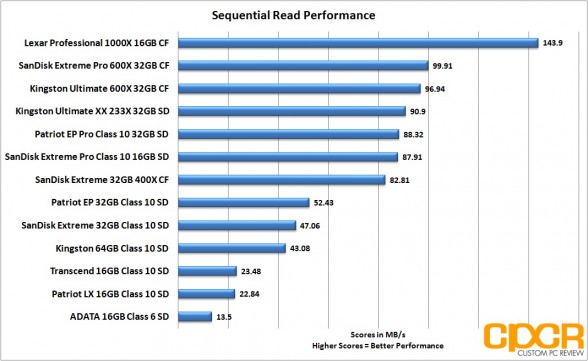 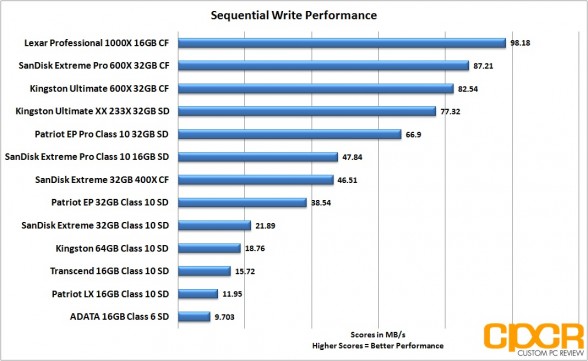 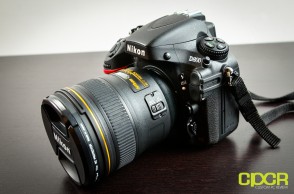 For our real world testing, we’ve decided to use Nikon’s new D800 DSLR camera as our testing platform. This beastly DSLR camera features a 36.3 MP sensor, which produces Nikon compressed RAW files between 40MB and 80MB – a perfect filesize to really push our ultra fast memory cards. In addition, it also is capable of using both SD (up to UHS-I supported) and CF cards (up to UDMA 7 supported), which can push the cards even closer to their limits.

Our testing today will consist of a 30 second burst of continuous high speed shooting in RAW mode. This will allow the DSLR’s internal cache to fill up, which means it’ll have to transfer the files out of cache before a new picture can be taken. At the end of our 30 second burst, we’ll record the number of pictures taken. 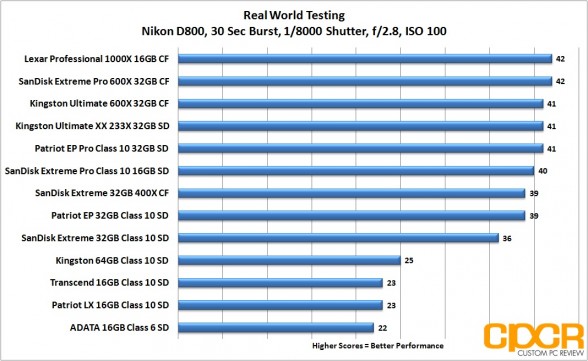 Alright, so let’s take a look at the results from our real world testing. With our D800 in high speed continuous shooting mode, we can see that generally the lower tier memory cards are able to take around 25 photos in 30 seconds while the high speed cards will do about 40 photos in 30 seconds. Unfortunately, it seems like the camera itself tops out at around 40 pictures per 30 seconds, so even having ultra fast memory cards doesn’t yield much benefit over just purchasing a more mid tier memory card.

In addition to doing high speed shooting tests, I also did some HD video recording testing as well off the D800. However, the D800 only features 1080P recording at up to 24 Mbps, which doesn’t require a whole lot out of the memory card. Every card in our roundup today even including the ADATA Class 6 memory card was able to record HD video perfectly fine.
[section label=3. Conclusion] 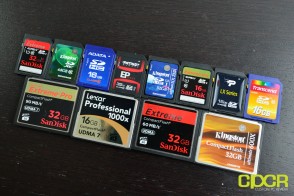 Alright, so let’s cut to the chase and answer the original question that we started out with. Do high speed memory cards really matter?

Well, yes and no. Let’s start with the yes. In our Nikon D800 continuous shooting test, a number of bottom tier Class 10 SD cards such as the Transcend Class 10 SD card and the Patriot LX Class 10 SD card failed to keep up with the upper tier memory cards. After the cache on the D800 filled up, the camera took significantly longer to offload the contents of its cache into the slower tier memory cards. Those who do a lot of sports, action or editorial (paparazzis!) photography may find that upgrading to a faster memory to be beneficial  Now, this may not apply to every camera, since the D800 is a top tier professional camera outfitted with a full-frame 36.3MP sensor. Most cameras today (even DSLRs) will come equipped with a sensor rated  at 24MP or less, which will result in significantly smaller photos, and consequently significantly shorter cache to memory card offload times as well.

Another advantage of having a fast memory card is transfer speeds. Taking a look at our sequential read/write testing, the top tier memory cards showed significantly higher transfer speeds than their lower tier cousins, which may make a huge difference for those who regularly fill up their memory cards and need to offload data constantly on to their computer. In my testing of the Lexar Professional 1000x CF card, it was capable of 143.3 MB/s sequential read speeds, which is nearly double the sequential read speed of the SanDisk Extreme 400x CF card. Of course there’s also the price to consider. The Lexar Professional 1000x costs about 1.5x the price of the SanDisk Extreme 400x CF card, so it’ll really depend on how much the user values transfer rate as the difference between the two cards in our D800 burst shoot testing was very minor. 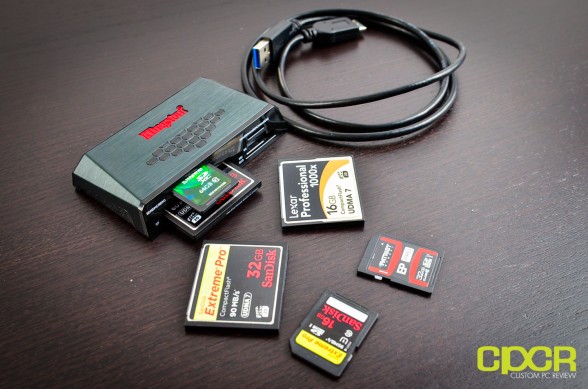 With that said, let’s talk about the no. The D800, along with most newer DSLRs on the market, have very large internal memory caches (15-25 RAW files). This means that for most photographers out there, even the slower, cheaper memory cards will work perfectly fine given that you don’t need to do continuous shooting that can over-fill the internal cache. Additionally, in our real world testing, the D800 was not able to properly utilize the additional performance offered by the faster cards such as the Kingston Ultimate 600X CF, the SanDisk Extreme Pro 600X CF, and the Lexar Professional 1000X CF versus cards in the mid tier such as the SanDisk Extreme 400X CF or even the Patriot EP Class 10 SD card. Those who can afford to wait an extra minute or two, but still want the maximum performance possible out of the camera may be perfectly fine with a mid tier memory card.

Finally, let’s also take a look at the pricing of the memory cards tested today. As expected, the blazing Lexar Professional 1000x CF card came in at the highest price per gigabyte coming in at a massive $4.68/GB, while the lowest priced card was actually quite surprisingly the Kingston Class 10 64GB SD card, which came in at just $0.76/GB.

For SD cards, the best bargain (price/performance) to be found is the SanDisk Extreme SD card, which is capable of providing excellent performance at a fairly low cost of only $0.99/GB, only $0.23/GB more than the least expensive Kingston Class 10 64GB SD card, but in real world testing is capable of an additional 11 photos in a 30 second burst. In terms of the fastest SD card tested today, the award goes to the Kingston Ultimate XX SD card, which was able to best every other memory card tested today in read, write and real world performance testing. That said, special mention does go to the Patriot EP Pro SD card as it was able to come extremely close to the performance of the Kingston Ultimate XX SD card at a price point of $0.92/GB less.

For CF cards, the best bargain to be found today is the Kingston Ultimate 600x CF card, coming in at only $2.21/GB and is capable of providing very respectable performance for the price. In terms of the fastest CF card tested today, the Lexar Professional 1000x easily takes the spot, dropping a sequential read speed of 143.9 MB/s and a sequential write speed of 98.18 MB/s. It also tied with the SanDisk Extreme Pro CF card topping every other memory card in terms of real world performance, marking it for the top spot in terms of performance. Special mention goes out to the Kingston Ultimate 600x CF card for providing real world performance similar to the Lexar Professional 1000x CF card, but coming in at nearly half the price.