Bow to the Sensei 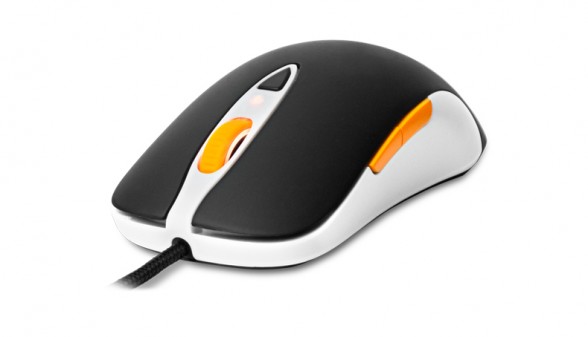 A couple of months back, we reviewed the SteelSeries 7H Fnatic Edition gaming headset and for the most part, we got a good taste of why Fnatic chose the 7H as their officially endorsed product – it was a great headset.

First, you get a  stylish new paintjob based off the Fnatic team colors and while beauty is ultimately in the eye of the beholder, I gotta say it looks good. Second, the Fnatic edition of the Sensei did away with the chrome top layer of the mouse and replaced it with a matte plastic type of finish which enhances the grip of the mouse. Like I said, these are some pretty slight improvements to the design, but ultimately they’re still improvements. However, because there aren’t any improvements done to the core design of the mouse, this review should apply to the original SteelSeries Sensei as well for those of you who’re interested in picking one up.

That said, other features included are the same standard features that come with the original SteelSeries Sensei, so you’ll still get that bottom mounted LCD display which allows for full control to every function on the mouse without the need for any software, the 75MHz ARM processor powering the aforementioned LCD screen, ambidextrous design, DPI adjustment capability from 1CPI – 5700CPI (14,700DCPI, more on this later), and the Avago ADNS-9500 Sensor.

A Closer Look at the SteelSeries Sensei Fnatic 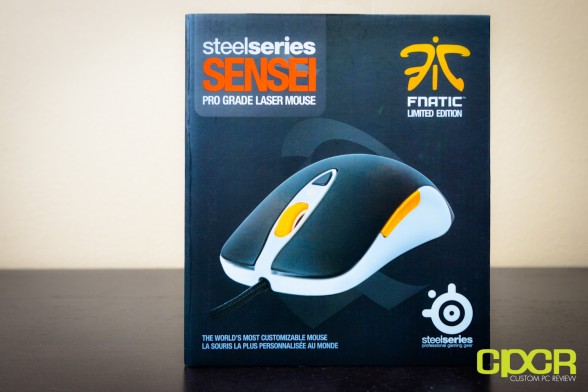 The SteelSeries Sensei Fnatic comes in the standard SteelSeries mouse box with a large image of the product on the front cover. At the top right corner, we get the Fnatic logo prominently displayed showing their endorsement of the product. 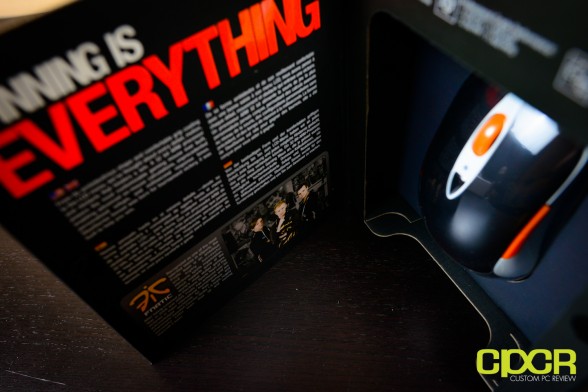 The box opens up to show the mouse through a plastic window on the right. On the left, we get some features and marketing spiel on why you should buy the SteelSeries Sensei Fnatic. There’s also a little bio on the bottom of the left side telling us who Fnatic is just in case you bought the mouse for the visual appeal. 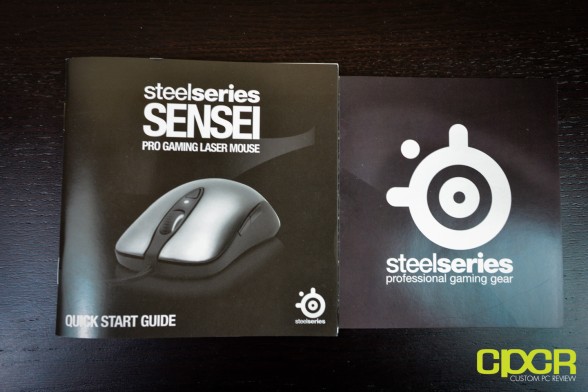 The SteelSeries Sensei Fnatic comes with an instruction booklet of the original Sensei. Additionally, we also get that good old SteelSeries product catalogue to ensure you buy more stuff. 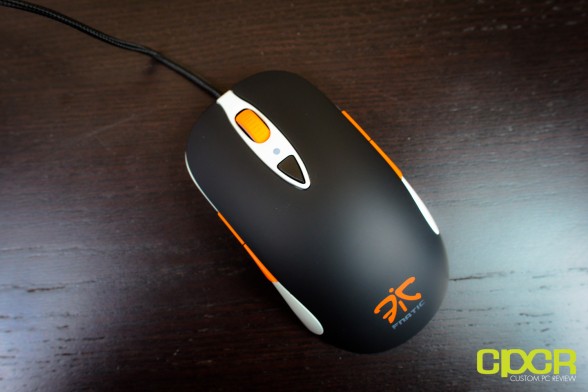 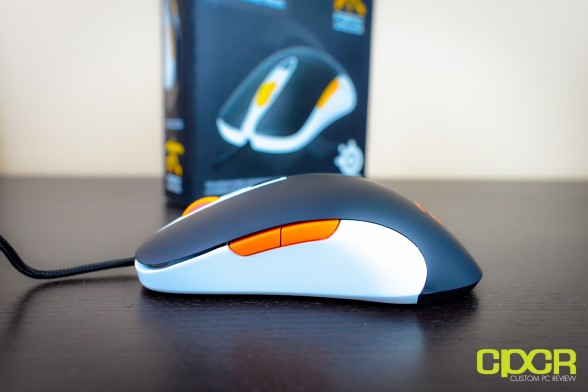 There are two side buttons on either side of the mouse as a part of the ambidextrous design. 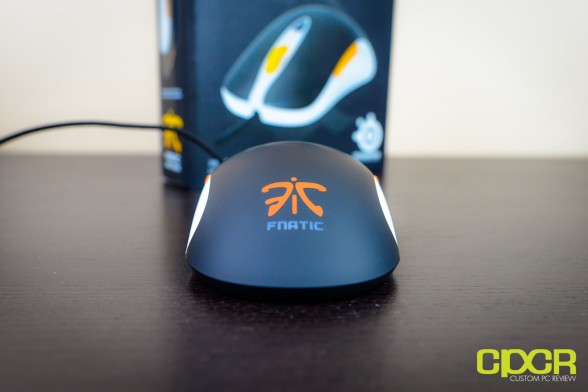 The Fnatic symbol replaces the SteelSeries logo found on the original Sensei. The backside has ample of space for palm grip users. 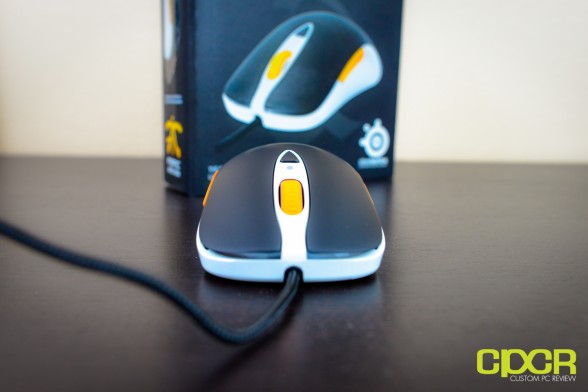 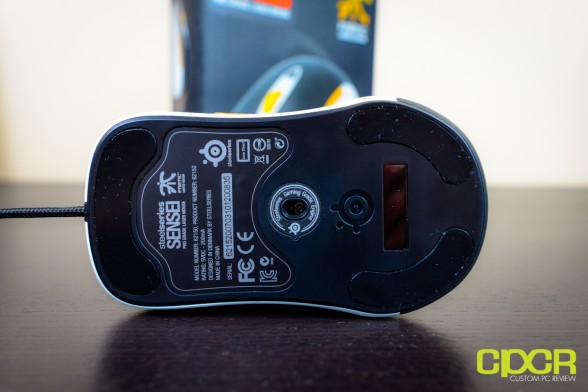 The bottom of the mouse houses the Avago ADNS-9500 Sensor, the 3 mouse feet crafted out of UPE material, and the LCD display. 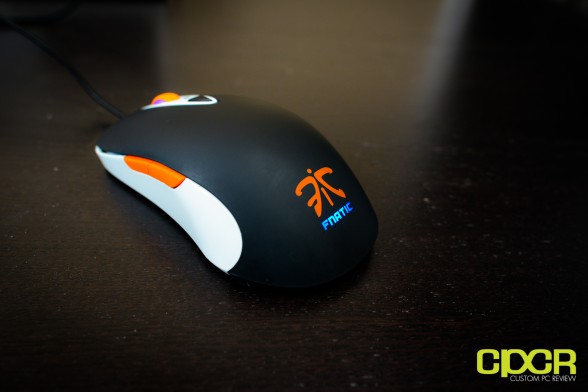 Once plugged in, the Fnatic logo and the scroll wheel lights up. Through the software utility you may choose between 16.8 million different colors. Additionally, the CPI indicator button lights up as well when activated. 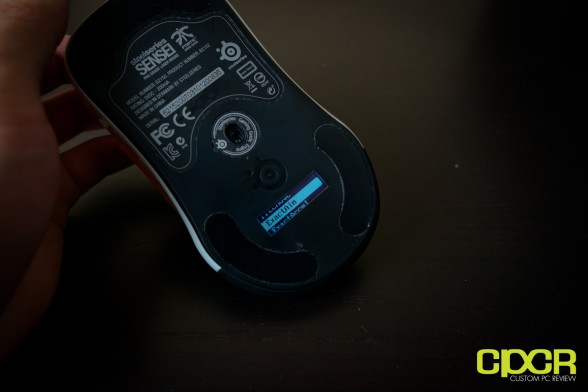 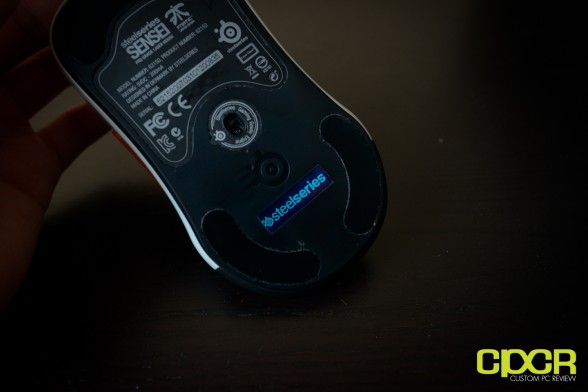 The little LCD display on the bottom of the Sensei Fnatic was bright and easy to read off of. By pressing the triangular button behind the scroll wheel, all the available settings were presented to me except for key programming and color options (you’ll need to download the driver for that). Changing settings on the Sensei Fnatic was painless, but I had to pull out the included instruction booklet to see what each of the settings did. After testing out all the ExactTech settings, I found two that are really worth mentioning. First is the ExactAim. With the ExactAim function enabled, the Sensei slowed down my mouse cursor when it’s not detecting fast movements. Having the ExactAim function set to 3 on the scale of 10, I still had near full control of my mouse but the deceleration was still evident enough to dramatically improve my aiming in Battlefield 3. The second is the ExactLift function which changes elevates or lowers the lift-off distance. I had it lowered from the default 15mm to 5mm and felt a huge difference in performance.

The ExactAim function was a hindrance in Starcraft 2, since I didn’t need to constantly zoom in and out of a gun scope. Thankfully, profile switching can be done through the mini LCD screen at the bottom of the mouse as well. All I had to do was flip the mouse over, click the button behind the scroll wheel, and select profile 2 as current, done. The whole process takes about 5 seconds to complete. Setting each profile was easy too as all the functions and settings can all be changed and saved directly using the LCD screen on the mouse.

The Avago ADNS-9500 sensor installed on the Sensei was smooth and stable at lower CPI, but as the CPI increased especially into the DCPI range (5700CPI+), the jittering became more and more pronounced. At the sensor’s actual maximum CPI of 5700 my mouse pointer had just a tiny bit shake to it, but it did not affect its functionality in any way. Since the embedded 75MHz ARM processor doubles the actual CPI, I decided to test out the mouse at the ridiculous 11,400DCPI maximum. At this point, the jittering was so terrible that the mouse pointer became uncontrollable. Otherwise, the sensor does have a fair bit of both positive and negative acceleration, so I’d recommend looking at something with an Avago ADNS-3090 optical sensor if you want a sensor with no acceleration. 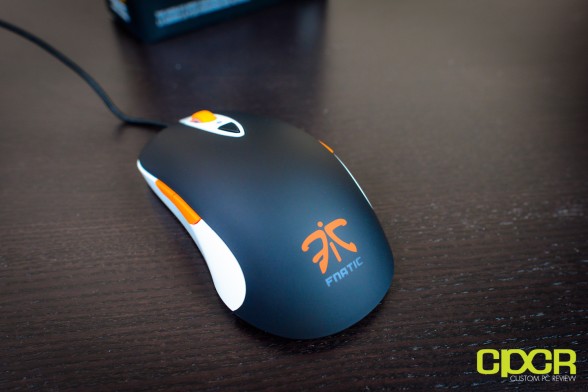 The Sensei Fnatic has a unique shape despite being quite a standard looking SteelSeries ambidextrous mouse in appearance. The mouse sports a low height, typical of ambidextrous claw grip mice, but the overall shape of it caters to the palm grip. This way, the mouse can support all many different common grip styles.

My two primary grip styles worked great with this mouse (I have medium-sized hands). In the palm grip position, the large back section supported my hand fully and the matte rubber coating on the top part provided excellent grip. The same could be said about claw grip. The wide left and right clicks were easy to press and felt very responsive through my rapid clicks. The weight of the mouse is a bit light, but it’s very evenly distributed.

The increments on the ribbed scroll wheel was very precise, and it was quiet as a whisper during scrolling. The 4 side buttons are very nicely sized and easily pressed. The only downside about the mouse I noticed during testing was that the actuating force of the middle click was a bit light, so I accidentally clicked it several times while scrolling through websites. Additionally, it’s also worth noting that the side buttons are quite easy to actuate as well, so sometimes you might hit it while picking the mouse up. 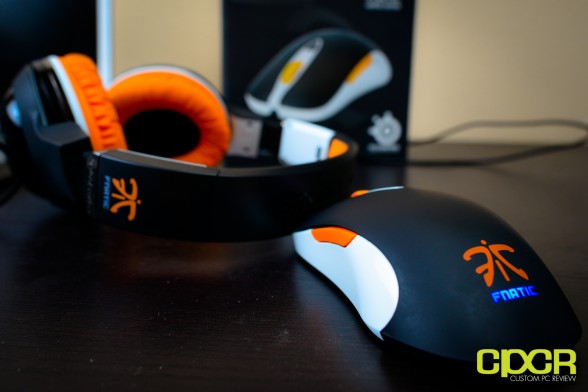 Overall, the Sensei Fnatic is an excellent performer and once again, I can see why Fnatic chose the Sensei as their endorsed gaming mouse of choice. The mini LCD screen at the bottom of the mouse provides instant access to all the core settings of the mouse without a driver. This is extremely important especially for the professional gamers out there as many of you know a lot of professional gaming tournaments disallow installation of driver software on tournament computers. With the Sensei or Sensei Fnatic, this isn’t an issue as all settings are not only saved onto the mouse, but up to 5 different profiles may be saved, which means you’ll have the exact settings you want for practically every game you play.

Additionally, SteelSeries has included a couple features on the Sensei Fnatic that surprisingly helps your game as well. For example, what would normally happen to me in FPS games such as Battlefield 3 with other gaming mice is that whenever I zoom in into the scope, the smallest movements in my hand would result in jitter on-screen, which throws off my aiming quite a bit.  This has been a huge frustration for me for a long time and partially why I prefer playing FPS games with mice that include sniper buttons. Knowing this didn’t exist on the Sensei, I was a bit bummed until I enabled the ExactAim function. I found this function (setting 3) to be extremely useful and possibly even superior to DPI switching or DPI shifting. The reason is that it works automatically and it accommodates all scope types, whether it be a sniper scope or a red dot sight. Whereas most gaming mice have gimmicky functions, ExactAim actually stood out as something that really does put you at an “unfair” advantage. That’s much more than I say can about most so called “gaming mice” on the market.

The Avago ADNS-9500 Sensor was overall just OK. It was stable all the way up to 5700CPI and it gets a little jittery here, but not enough to interfere too much. The DCPI technology doubles the max CPI to 11,700 CPI, but it becomes unusable at this point. Although this may bring tears to some simply because it’s a imperfect function,I highly doubt anyone will need this high of a CPI. The sensor does also exhibit a fair bit of acceleration, so if you’re a twitchy FPS gamer, this might not be for you. I would definitely be interested in seeing SteelSeries include the Avago ADNS-9800 sensor on the Sensei as it does cut down on the acceleration a fair bit.

Comfort is top-notch on the Sensei Fnatic as well. I was a little skeptical at first when the box informed me that it will fit to any grip style. But that speck of skepticism was swept right out of the door as soon as I placed my hand on it. Palm grip is extremely comfortable, and claw grip is similarly pleasant. The grippy rubber top layer definitely seems like a big improvement over the original chrome shell which according to many reviewers is slippery. All buttons on the mouse are effortless to press and felt responsive. The scroll wheel is easy to scroll and is whisper quiet.

There are, however, a couple of minor flaws with the Sensei Fnatic and it’s mainly just the actuating force on the scroll wheel click along with the side buttons. They’re quite light and I’ve accidentally hit it a couple of times scrolling through documents or picking up the mouse. This isn’t a huge concern as you do get used to it, but during that time I found it to be a bit frustrating. The other issue of course is the acceleration with the Avago ADNS-9500 sensor as I mentioned earlier. It’s a real buzz kill in games like CS 1.6 or Left for Dead 2.

Then there’s the price. Currently available on Amazon for $99.92, the SteelSeries Sensei Fnatic is definitely not for those with shallow pockets, but being SteelSeries’ top of the line gaming mouse, an endorsed product, and with the sheer amount of features SteelSeries has crammed in, I had the feeling the mouse wasn’t going to be cheap. That said, the original SteelSeries Sensei which includes all the core features of the Sensei Fnatic is currently going for $78.49, which is ~$20 cheaper than the Sensei Fnatic. For a top of the line gaming mouse, I think $78 is alright. The competition includes the Razer Taipan ($79.99), Zowie Gear AM-GS ($49.99) and SteelSeries Kana ($49.95).

Those who frequently play in professional gaming tournaments and/or go to local cyber cafes for some gaming action, the ability to control every aspect of the Sensei Fnatic right on the mouse itself is worth every penny.

The SteelSeries Sensei Fnatic Laser Gaming Mouse is not perfect, but it’s about as close as it gets. If you don’t mind the ambidextrous design (or prefer it) and can afford the high pricetag, you will truly find this mouse to be the Sensei to all other mice. Highly Recommended!

Special thanks to SteelSeries for making this review possible!