Ultrafast External Storage at Under 1 Ounce 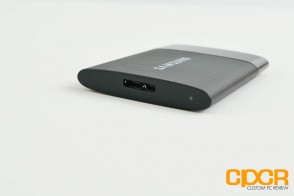 Let’s face it. External hard drives kind of suck. They’re slow, they’re heavy (even the portable ones), and one drop no matter how minor may result in complete data loss. It’s a reality of life that most of us have dealt with at least once or twice in our lives. While it’s a consolation that flash drives are available to store your data instead, most flash drives these days cap out at 128GB or 256GB with only a few, really expensive drives capable of storing 512GB or more. Even then, performance isn’t usually all that great since most flash drives use slow flash drive controllers and bottom of the barrel NAND.

Because of this void in the external storage market, Samsung recently introduced the Samsung Portable SSD (PSSD) T1, which utilizes the latest in SSD technology to provide content creators, enthusiasts, and professionals with access to extremely portable, extremely fast and extremely reliable external storage.

Physically, the Samsung PSSD T1 is a fairly small device, measuring in at less than 2.8″ long, just over 2″ wide, and 0.36″ deep. It also weighs in at about an ounce, so it’s not the heaviest thing in the world either.  Internally, the Samsung PSSD T1 utilizes a lot of the same components as the recently introduced Samsung 850 EVO. Although the PCB is being redesigned to fit into the PSSD T1’s smaller chassis, Samsung will carry over the same MEX/MGX controller along with the 32-layer 3-bit per cell MLC (TLC) 3D V-NAND found in the Samsung 850 EVO.

The Samsung PSSD T1 will be available in capacities of 250GB, 500GB, and 1TB. The drives will support USB 3.0 and will be capable of up to 450MB/s for systems that support UASP (USB Attached SCSI Protocol).

Warranty on the Samsung PSSD T1 is 3 years, which is pretty standard for an external drive, but it’s unfortunate that Samsung decided not to provide a 5 year warranty, which is the warranty period on the Samsung 850 EVO. That said, Samsung’s 32-layer TLC 3D V-NAND technology is fairly high endurance and should last the life of the drive.

With that out of the way, let’s take a closer look!

A Closer Look at the Samsung Portable SSD T1 500GB 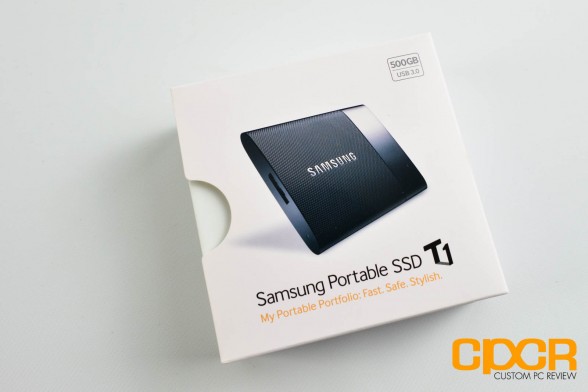 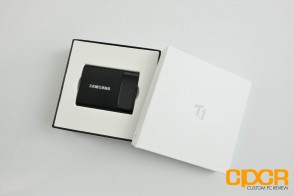 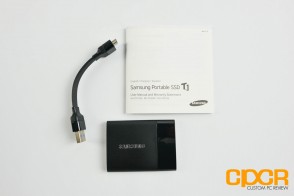 Samsung’s packaging is pretty fancy, but there’s not all that much included. Inside, there’s only some documentation, a 110mm USB 3.0 cable and the PSSD T1 itself. 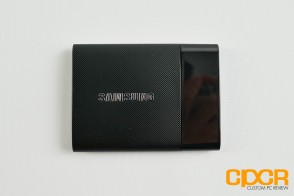 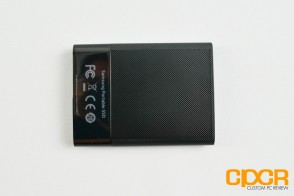 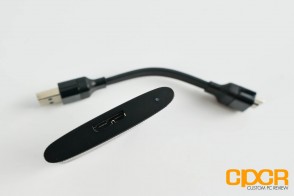 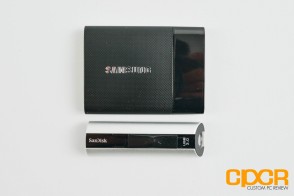 Here’s a closer look at the PSSD T1. It’s a pretty simple little device made of plastic and coated with a black chrome metallic finish. It’s also incredibly small with a vertical and horizontal profile slightly smaller than your average business card and a thickness of only 0.36″. It’s also incredibly light as well weighing in at about an ounce, which is about the same weight as a typical USB flash drive. 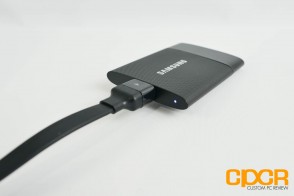 The only I/O port included on the PSSD T1 is a USB 3.0 Micro-B port. There’s also a small, white status indicator LED to the right of the port. 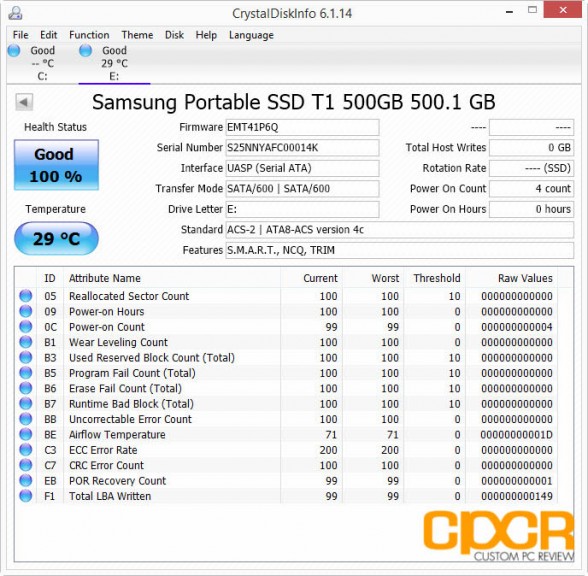 Crystal Disk Benchmark results were solid as well with the drive reporting performance up to 445 MB/s sequential reads and 424 MB/s sequential writes. 4K read/write performance is a bit slower than expected, but the USB 3.0 bus has significant overhead compared to SATA, so it’s likely that the drive is just running up on the limits there. Additionally, it’s worth noting that we are using Windows 8.1 for the testing platform, which generally shows lower performance than Windows 7 thanks to higher OS overhead on the USB bus. 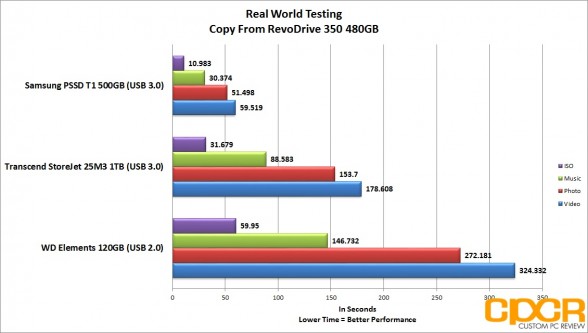 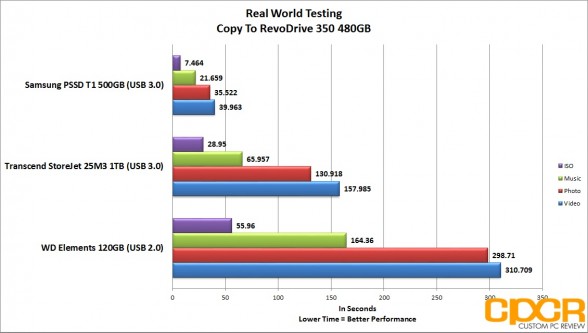 As a feature of the Samsung PSSD T1, Samsung also includes easy to use encryption software which may be used to encrypt the drive by taking advantage of the SSD controller’s built in hardware encryption engine. If enabled, the Samsung PSSD T1 encrypts all data on the drive using AES (Advanced Encryption Standard) 256-bit encryption, which is an encryption algorithm used by various corporations and government agencies to encrypt data. Most notably, it’s used by the NSA for encrypting top secret information.

Encryption support is available for systems with Windows 7 or higher, or OS X 10.7 or higher. 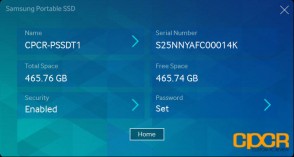 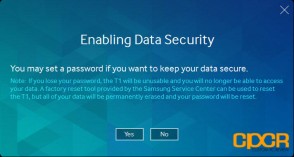 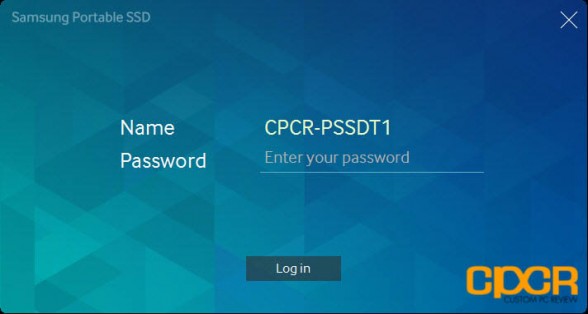 Once drive encryption is enabled, every time your drive is unplugged and replugged into a host device, the drive will prompt you for a password before before being able to access any data. Be warned however. If you manage to lose your password, the data on the drive will be lost. Forever.

Most encryption tools offered by external drive makers tend to use software encryption which uses system resources to encrypt and decrypt files. This results in a significant loss in performance when encrypting drive contents. The Samsung PSSD T1 on the other hand uses the hardware encryption engine built right into the SSD controller, so there’s little to no performance hit when encryption is enabled. 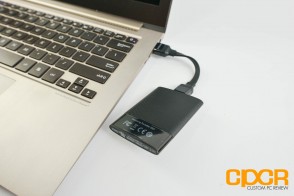 Truth be told, when Samsung told me earlier this year that they were coming out with a new external SSD, I wasn’t all that excited. I figured they’d probably throw one of their existing SSDs into an enclosure, add a bridge chip and call it a day. Luckily, that wasn’t 100% the case. Instead, Samsung went to the drawing board to produce a drive with additional features and a custom PCB/enclosure that would not only fit into a tiny, super-portable chassis, but would also offer up to 1TB of drive capacity.

Performance on the Samsung PSSD T1 500GB is pretty much what you’d expect out of an external USB 3.0 SSD. Sequential read and write performance easily maxed out the USB 3.0 bus reaching 462 MB/s and 436 MB/s respectively. In our real world testing, the Samsung PSSD T1 smoked our USB 2.0 external hard drive by over 85% in all transfer tests and even smoked our USB 3.0 external hard drive by a good 65%+ in all transfer tests as well. 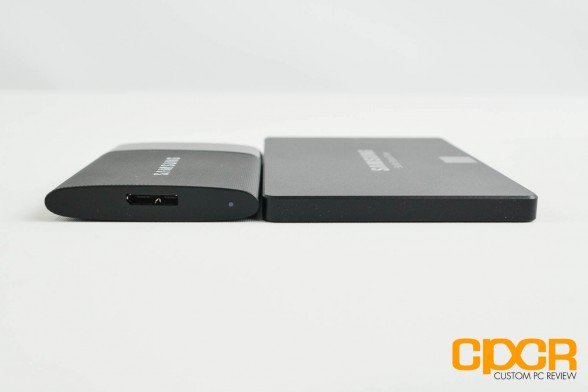 While performance, portability, and design are great selling points for the PSSD T1, I think the biggest selling point for the PSSD T1 is the fact that it’s probably the first external USB 3.0 SSD to support hardware based encryption. The included software makes setting up encryption a breeze and because the PSSD T1 uses hardware based encryption, there’s zero impact on performance. This is by far the best implementation of encryption I’ve seen on an external drive and it should be a huge benefit for individuals and corporations who regularly carry around sensitive data such as legal documents, tax information, medical records, etc.