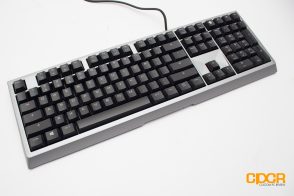 As such, today we’ll be reviewing Cherry’s MX Board 6.0 mechanical keyboard with the Cherry MX Red switches. Let’s take a closer look. 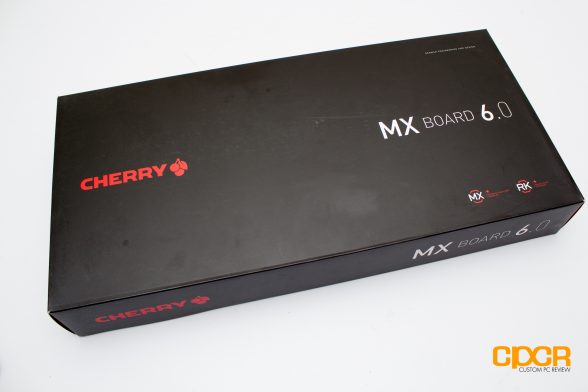 Here’s a look at the packaging for the Cherry MX Board 6.0. The box is pretty plain with just huge Cherry logos and MX Board 6.0. 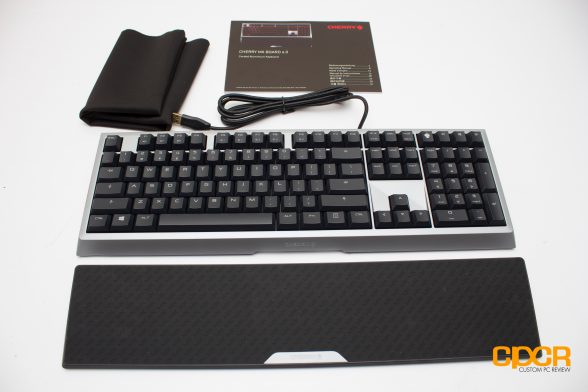 The Cherry MX Board 6.0 comes bundled with a basic cover, a large wristrest and some documentation. The keyboard itself looks very plain, which isn’t surprising looking at the rest of Cherry’s products which are typically aimed at business and enterprise customers. 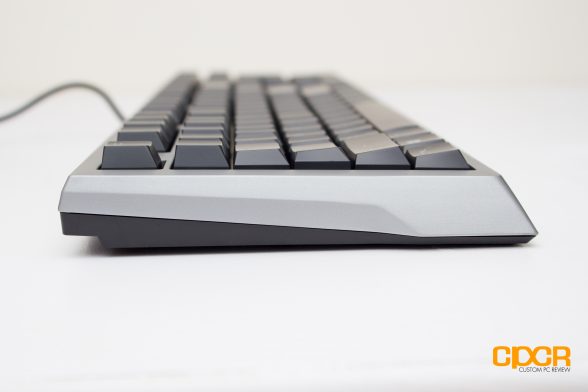 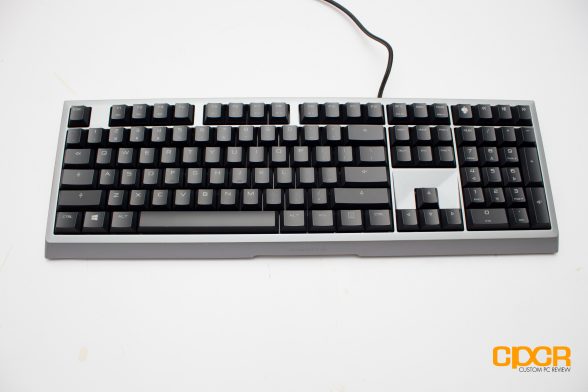 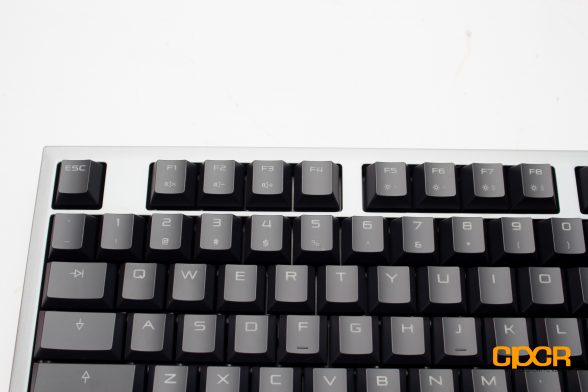 We find nothing fancy in the function row aside from some volume adjustments and backlight brightness controls. The key-prints aren’t outlandish either. 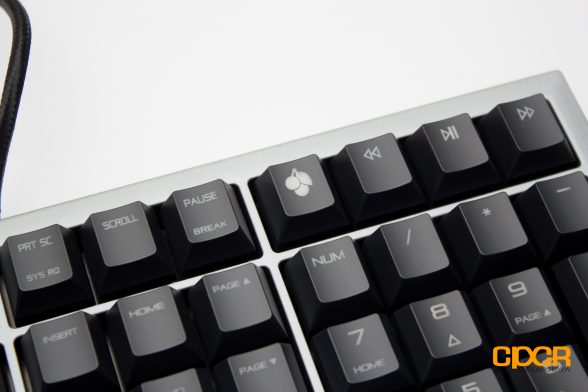 Where there should be LED indicator lights are populated with the Windows Key toggle switch and playback controls. The indicator lights for the Caps lock, Num lock, and Scroll lock has been moved onto the respective keys instead. 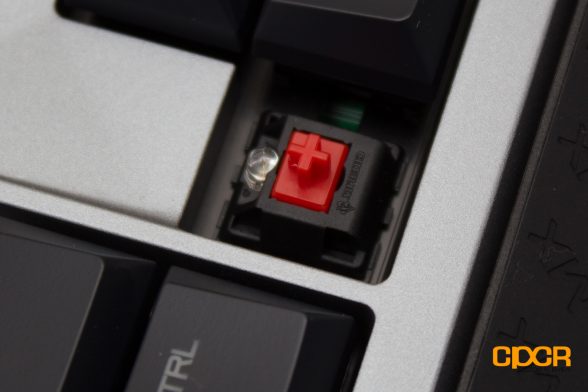 We have the familiar Cherry MX Red switches with switch-mounted LEDs. Most keys on the keyboard can only glow in red with the lock keys being the exceptions – they change to blue to indicate that they’re activated. 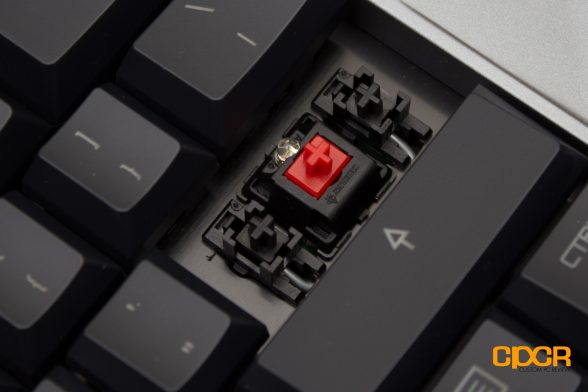 Being a Cherry keyboard, the MX Board 6.0 utilizes Cherry stabilizers for the longer keys. 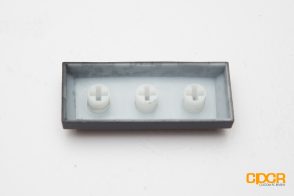 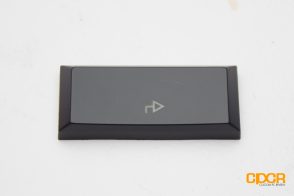 The keycap quality on the Cherry MX Board 6.0 is a bit disappointing. They feel very flimsy and light. They also sit very loosely on the stem, requiring little force to remove. 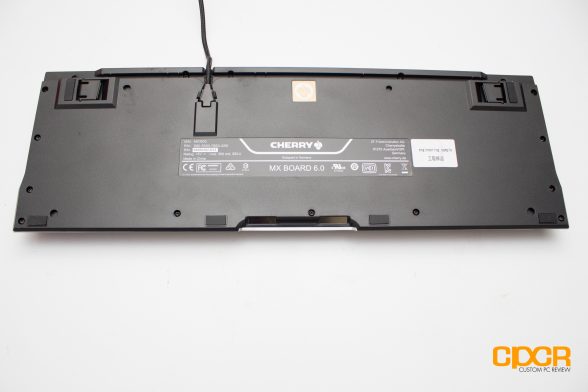 The back of the keyboard is constructed out of plastic and secured with a whopping 20 screws. 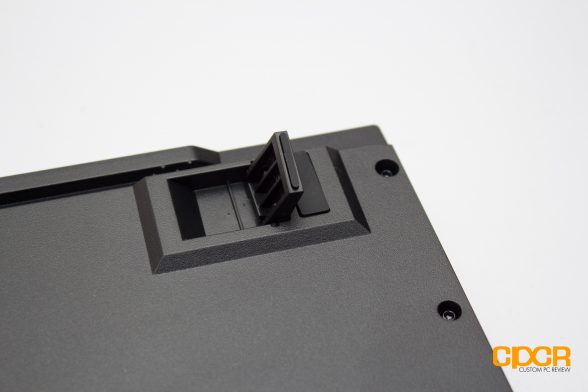 The elevator feet flips out towards the side. 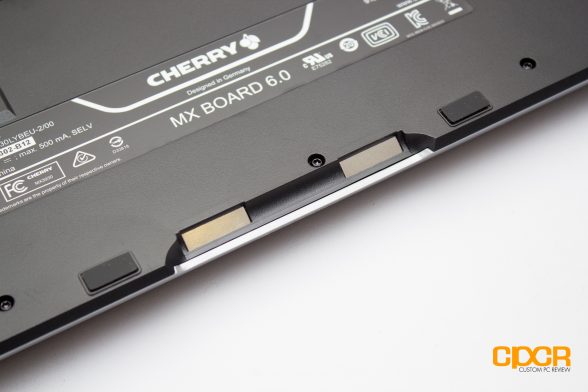 A pair of magnets at the bottom help to keep the wrist rest firmly attached to the base. Tiny rubber feets are scattered around the edge of the chassis to prevent slippage. 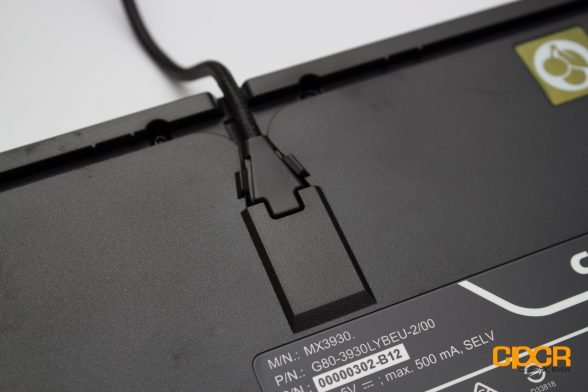 The plug on the connector side is very interesting. It certainly gives the illusion that it can be detached from the base, but it’s not actually possible. You can’t pull it out from the rear due to the tapered tail, and you can’t lift it from the top because that would break the plug. 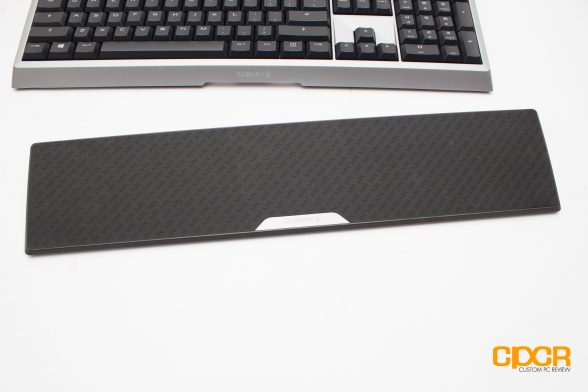 As such, the Cherry MX Red’s low actuation force combined with its consistent response rate is a blessing in gaming. It had no trouble keeping up with my rapid tapping in Starcraft 2. It also doesn’t tire out your finger as quickly as some of the switches with a heavier actuation force. The Cherry MX board also isn’t loud like other boards with tactile bumps which is a bonus if you game late at night and don’t want to wake up the entire house.

Being a keyboard made by Cherry Corp, it shouldn’t come as a surprise that the Cherry MX Board 6.0 uses Cherry Stabilizers however, the unfortunate tradeoff is that they tend to make the longer keys feel different in terms of the actuation force required to actuate a key than their Costar competitors. With that said, the stabilizers on the Cherry MX Board 6.0 is still good, likely to due the resistance offered by the switches themselves. While they’re indeed a little mushy when bottomed out and the depression force isn’t completely consistent, they’re fairly decent and isn’t the worse I’ve seen.

The Cherry MX Board 6.0 also incorporates analog signal sensing via a technology called Cherry RealKey. The controller reads the current differences when the key is pressed, therefore reducing the time for registration down to just 1mm. In testing, this made no noticeable difference. The keys were responsive, but I wasn’t able to feel a difference between a keyboard with and without Cherry RealKey. Good thing is that Cherry RealKey also supports full NKRO-important if you roll 10 keys at a time.

Dropping a book onto the Cherry MX Board 6.0 produced the expected results – full NKRO. 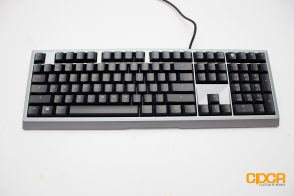 In most regards, the Cherry MX Board 6.0 completes exactly what it sets out to be – a durable, professional keyboard, but it does fall short of the competition which is something I’d like to see Cherry iron out for the next iteration.

As someone with a multitude of accessories on his desk, I appreciate the matte, neutral tone of the grey aluminum chassis. Having a keyboard that isn’t shaped after fighter jets helps it easily camouflage into its environment. With that said, I’m not a fan of the non-programmable mainly red-colored LEDs. While it’s nice and bright-a killer feature in 2013-programmable RGB lighting is practically required for a premium mechanical keyboard these days.

In terms of overall build quality, having the front plate crafted completely from aluminum eliminates any creaking and flexing you’d typically find on keyboards with plastic chassis, which is typically a problem for lower end keyboards. The chassis also adds a bit of weight to the board, which helps it stay in place. While it’s not flashy compared to other keyboards on the market, it’s very high quality which is a huge plus.

Keycaps on the Cherry MX Board 6.0 is a bit interesting as well. They’re a tad lower than OEM keycaps which make no difference in performance however, it makes the keys look more “flush” with the chassis. While I’m not sure if it’s because less material is used on the keycaps or if the keycaps are simply manufactured with very wide tolerances, they do sit very loosely on the stem making them prone to sometimes popping off under rapid tapping. This is extremely frustrating when you’re scrambling to spam hotkeys in gaming. They also look flimsy and cheap which isn’t good considering keycaps cover the majority of the keyboard.

It’s a little difficult to rate the Cherry MX Board 6.0’s performance. Cherry touts that it targets the professional users, yet it uses the linear Cherry MX Red switches rather than Cherry MX Blue or Cherry MX Brown which are typically favored by typists and gamers alike. Considering this is the only switch flavor that’s being offered with the MX Board 6.0, I feel like the keyboard tilts more towards gamers instead of typists. Typing experience is in no way awful, but touch typists will undoubtedly miss the tactile bump in the middle of travel.

Extra features on the Cherry MX Board 6.0 includes a few dedicated media keys, a windows key/Fn key toggle button, and a large, rubberized wrist rest. The dedicated media keys work great and the Windows/Fn toggle key is wonderful for gaming. Since the rubberized wrist rest can be detached, you can run it under the sink when it’s dirty. It’s a damn good thing too, because you’re going have to do that a lot with all the dirt and dust that it collects.

To sum it up the Cherry MX Board 6.0 is a durable, simple keyboard that falls short against competitors on lighting options, keycap quality, programmability, and switch selection. Personally, I can’t find I can’t ways to justify its premium $173 price tag. Even if you don’t need any of the features mentioned above and want the large wrist rest, I would still push you towards other selections such as the Das Keyboard Professional 4, Ducky Shine, and many other keyboards that offer similar-if not more-value at a lower price point.