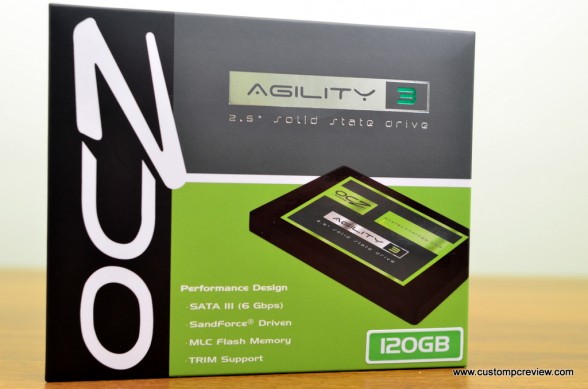 We love performance and as we all know by now, a sure fire way to speed up the pace of your system is to install a SSD. With so many SSDs on the market there’s a choice for everyone, from the most budget oriented to the extreme enthusiast.

Today we’ll be reviewing the OCZ Agility 3 120GB SSD. This SSD is targeted towards customers who want the performance gains and power savings of an SSD, but can’t afford to shell out north of $500 for an uber speed enthusiast level SSD. So why is OCZ able to offer lower pricing on the Agility 3? I mean, it uses a SATA 3 6Gb/s interface and it uses the powerful LSI SandForce SF-2281 controller similarly to OCZ’s own blazing fast flagship SSD, the Vertex 3 MAXIOPS. Well, the difference is in the NAND. In order to save on costs, the Agility 3 uses more affordable asynchronous NAND instead of the more expensive, but higher performing synchronous NAND.

Is the cost savings worth the performance hit? Lets find out in the review. 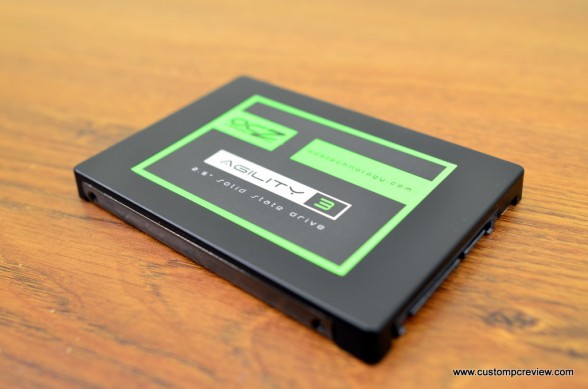 Here’s a look at the SSD itself. The SSD comes in a 2.5″ form factor, which means it’ll fit in most desktop and laptops on the market. The black and green color scheme looks pretty good especially for the Nvidia fans out there. 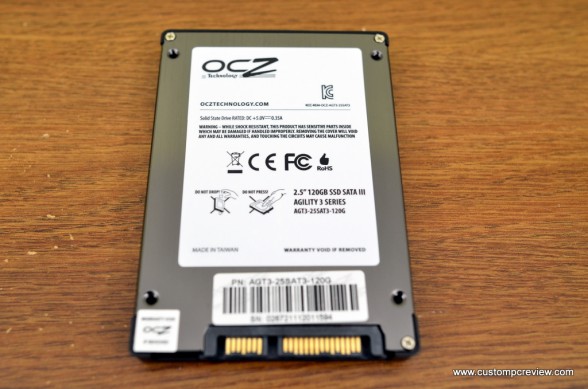 On the back of the SSD, you get some information about the drive. Only the back side of the enclosure is metal. The top part is plastic. 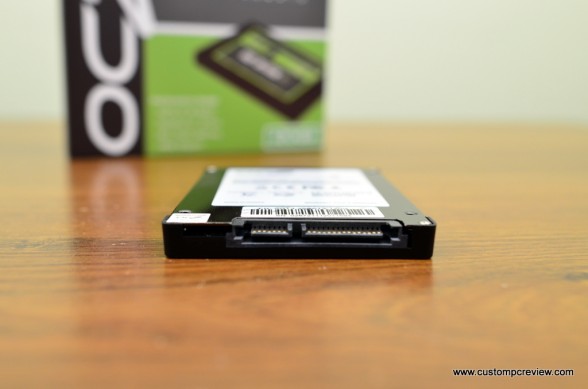 The SSD includes a SATA 3 6Gb/s connector, which means you’ll want to connect the SSD to the SATA 3 6Gb/s header on your motherboard to fully take advantage of the SSD’s performance. 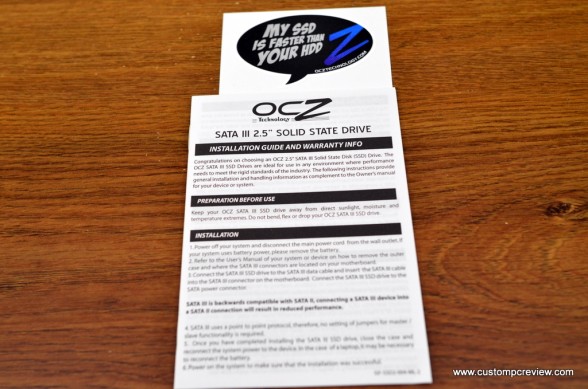 The Agility 3 also comes with some documentation as well as a case sticker. Unfortunately, no cloning software is included. 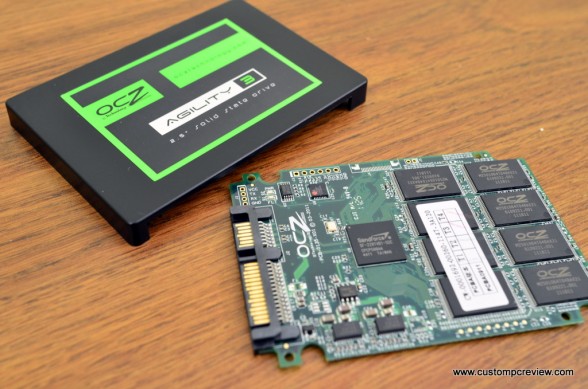 Opening up the SSD, we see the SandForce SF-2281 controller along with 8x 8GB 25nm OCZ branded (most likely Micron) MLC Asynchronous NAND. 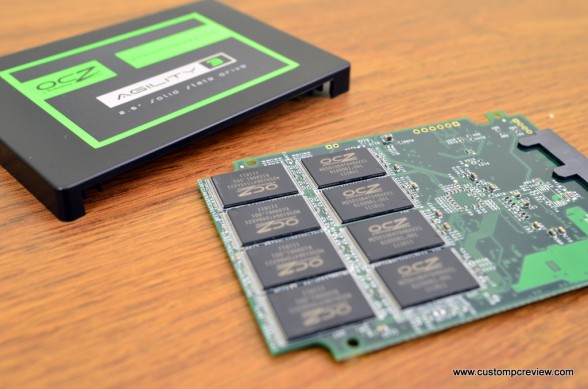 Along the back, we have another 8x 8GB 25nm Micron MLC Asynchronous NAND. In total, we have 128GB of Micron NAND with 8GB reserved for SandForce over-provisioning. 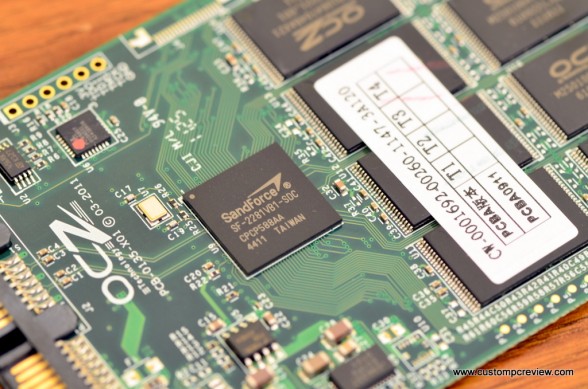 Here’s a closer look at the SandForce SF-2281 controller. It’s so beautiful! 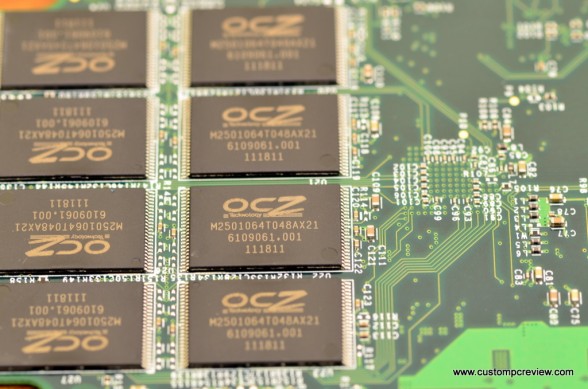 Finally, here’s a closer look at the NAND chips. It’s interesting to see that these NAND chips are branded using the OCZ logo instead of the Micron logo. 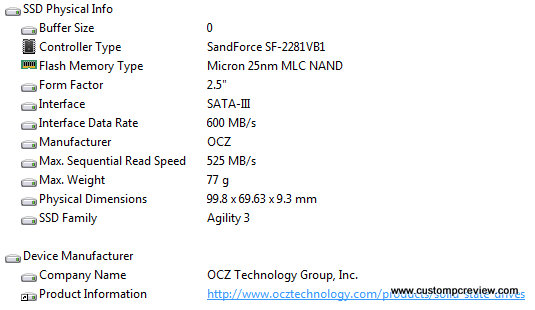 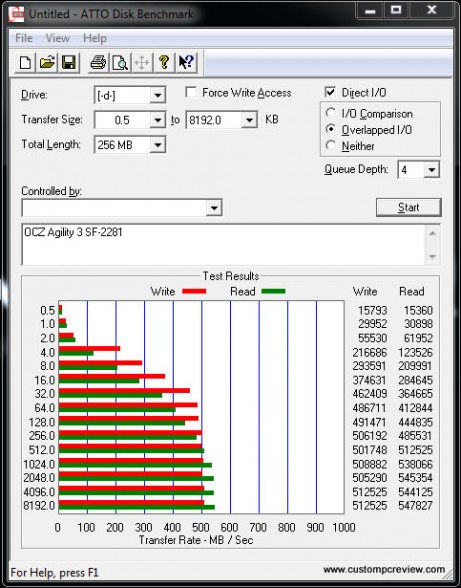 The Agility 3 performed very well in this benchmark as expected, outperforming its rated speeds of 525MB/s read and 500MB/s write with files larger than 4MB. 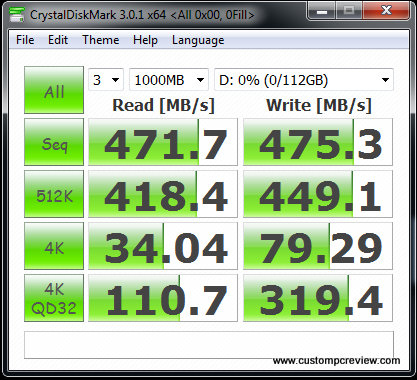 As expected, the SF-2281 based Agility 3 performs very well with compressible data, scoring 471.MB/s writes and 475.3MB/s reads. This number is quite similar to the Kingston V+200 120GB SSD we reviewed very recently. 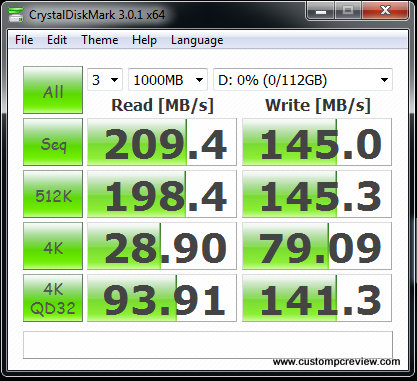 Since the Agility 3 is in OCZ’s budget friendly line of SSDs, it uses less expensive asynchronous NAND. While it’s easier on the wallet, the asynchronous NAND isn’t able to handle incompressible data as well as synchronous NAND. That being said, these numbers are very much in line with what we typically see in other asynchronous NAND based SF-2281 SSDs. 4k performance is still very good, so any operating system running on the drive will still feel very quick. 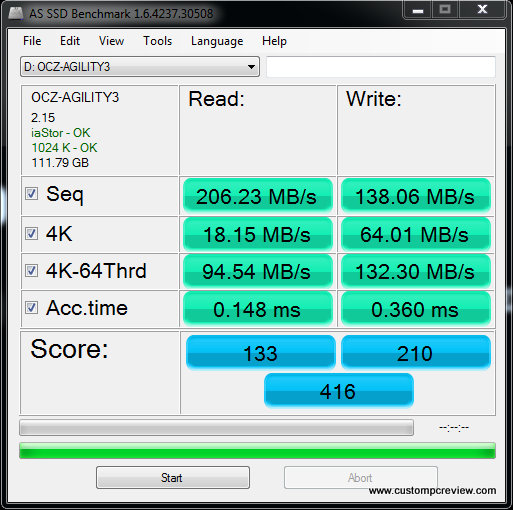 Since HD Tune is a bit confusing, we’ve decided to remove that from our SSD benchmark suite and replace it with AS SSD which, as its name implies, is a very commonly used industry wide benchmark for SSD benchmarking. AS SSD uses incompressible data for its testing,  and similarly from what we’ve seen from Crystal Disk Mark, we see a pretty serious performance dip when compared to the Crystal Disk Mark 0 fill test. Again, we still see good 4k numbers and very low access times, which translates into very good performance during day to day use. 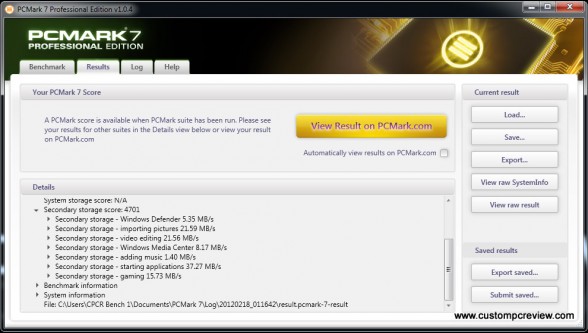 The OCZ Agility 3 120GB with a score of 4701 scores right above the Corsair Force 3 and right below the Kingston V+200, but these scores are within 1% of each other, so it could easily be attributed to the margin of error. That being said, this drive is still miles and miles ahead of our traditional hard drive, the WD Scorpio Black 250GB. 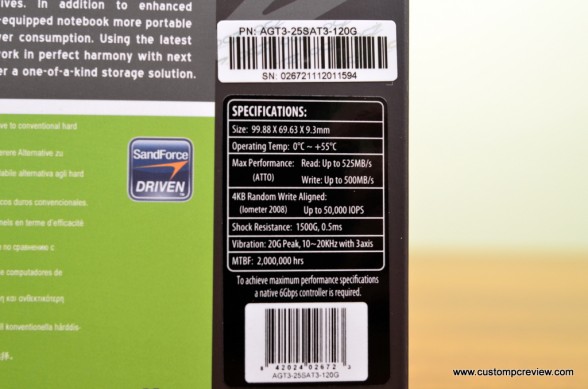 Overall, the OCZ Agility 3 120GB SSD performed admirably. It scored very well in 4K reads and writes which means as long as you aren’t copying large movies or entire music collections around all day, you aren’t really going to see much of a difference between the Agility 3 and a higher end SSD with synchronous NAND. That being said, it did perform very similarly to its asynchronous NAND based competitors, so unless there’s a price incentive somewhere, there’s no reason to purchase the Agility 3 over say a Force 3 or a Kingston V+200. However, if you do plan on copying large amounts of incompressible data around (music, movies, etc.) your money might be better spent on synchronous NAND based SSDs such as the Vertex 3.

When it’s all said and done, the OCZ Agility 3 120GB is an excellent SSD that offers great performance at a price point similar or lower to competitors in its class.  If you’re looking for that first SSD and you really want save every dime possible, the Agility 3 is definitely worth a look.

The OCZ Agility 3 is currently available at Amazon.