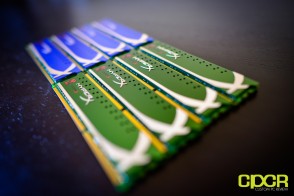 Since we’re mostly enthusiasts here at Custom PC Review, we typically enjoy reviewing the highest clocked, lowest latency memory, but with energy efficiency becoming so popular these days with companies introducing ultra energy efficient 28nm GPUs, 22nm CPUs, and solid state drives, it only seems logical to find out what kind of energy efficiency may be had by going with low voltage memory.

This is why today, we’ll be reviewing the Kingston HyperX Genesis: LoVo 8GB (2x4GB) DDR3 1600MHz kit. (Which will now be referred to as HyperX LoVo for simplicity’s sake in the review.) Whereas the Kingston HyperX name typically implies high performance memory, the HyperX LoVo is actually clocked at a very run of the mill 1600MHz. So the HyperX LoVo doesn’t run at the highest memory frequency, then what makes it so deserving of the HyperX, “high performance” name? Well, whereas typical memory kits require 1.5v or even 1.65v to run at 1600MHz, the HyperX LoVo is actually capable of running at a frequency of 1600MHz despite receiving only a measly 1.35v. In theory then, this means that the memory will be more power efficient and will run cooler than 1.5v and 1.65v memory, but will still run at comparable speeds to the more standard 1.5v or 1.65v volt memory.

Is it time to go green? Head on to the next page for more!

A Closer Look at the HyperX LoVo 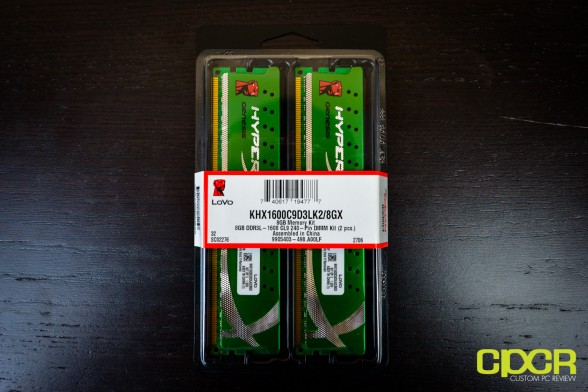 Here’s a look at the packaging for the Kingston HyperX LoVo. The front of the packaging includes a sticker that details the specifications and other miscellaneous information about the memory. 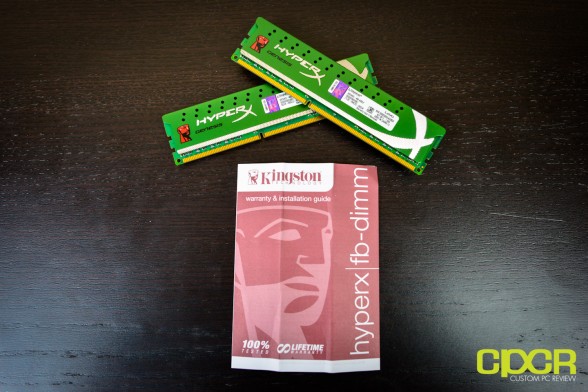 Inside we find some documentation on the memory along with the memory itself. The documentation specifies some of the value add you get for going with Kingston memory, namely a lifetime warranty and 100% tested working memory modules. 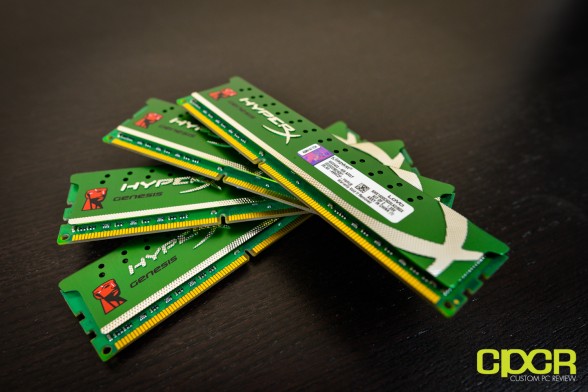 Here’s a look at the memory modules. The heatsink is in green, which is the standard color for “eco friendliness” and the heatsink is also low profile enough so that it should be compatible with most if not all air CPU coolers on the market. Kingston has also chosen go with a green PCB, which in this situation actually looks quite good. 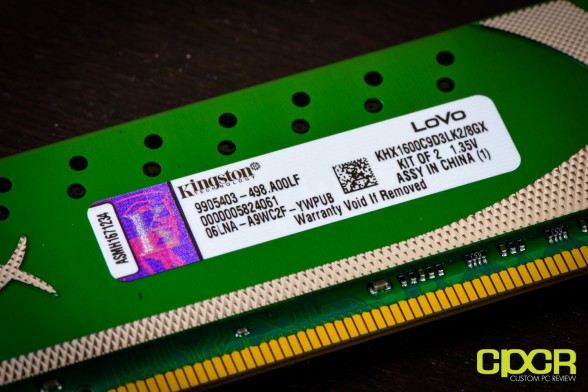 Here’s a closer look at the warranty/information sticker on the HyperX. We can see that the memory is 1.35v and our specific sample comes in a kit of 2 for 8GB. It’s also made in Kingston’s China factory. 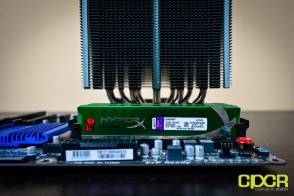 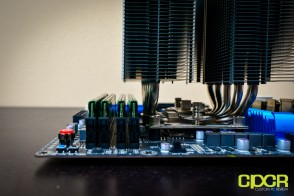 Here’s a look at four sticks of HyperX LoVo installed on our Ivy Bridge/Z77 test bench with the massive Phanteks PH-TC14PE CPU Cooler installed. As expected, the HyperX LoVo memory has plenty of clearance, even with CPU cooler with much less clearance than what we have here. 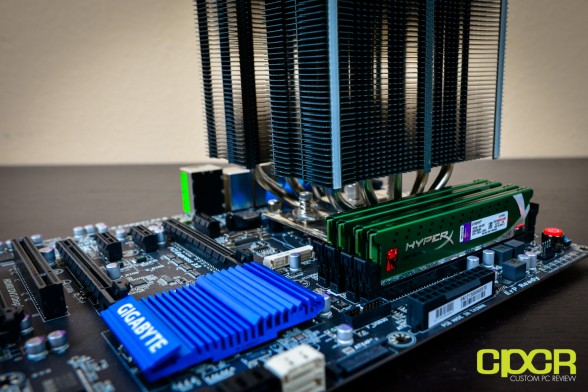 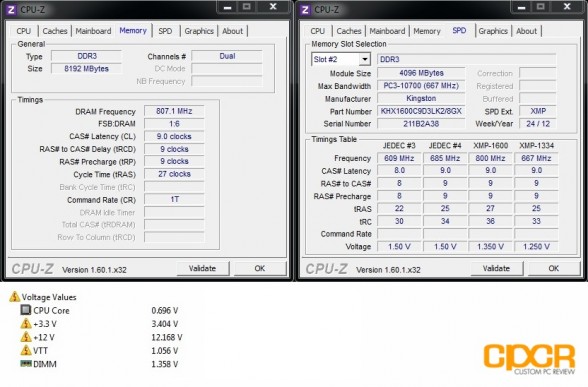 Initial setup of the memory was extremely easy as all the right settings were applied directly through the XMP profiles. In the CPU-Z screenshot above, you can see that the Gigabyte Z77X-UD3H motherboard set the memory at 1614.2MHz as it slightly boosts the clock speed a bit on memory.  Additionally, it looks like Kingston has programmed two XMP profiles into the HyperX LoVo, one running at 1600MHz 9-9-9-27 at 1.35V and another running at 1333MHz 9-9-9-25 at 1.25V. Finally, we’ve also got a screenshot of the readings from the sensors showing the memory running at 1.358V.

While in many of the pictures, I had 16GB of HyperX LoVo installed, for actual testing I’ll only be using the standard 8GB kit (2x4GB) as Kingston doesn’t actually offer a 16GB kit (4x4GB). However, those who need 16GB of memory or more will be able to purchase multiple 8GB kits (2x4GB) to fulfill additional memory requirements. 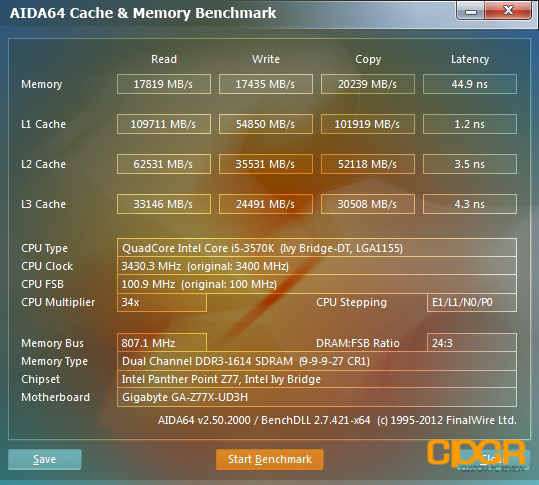 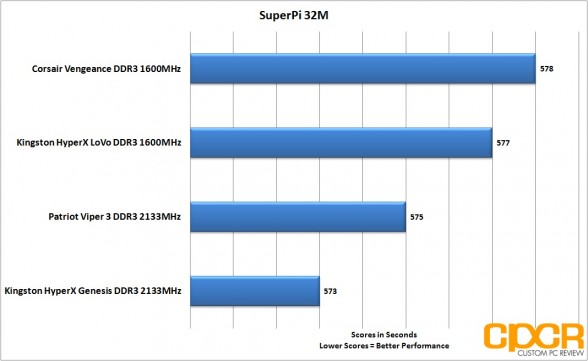 In the SuperPi benchmark, the HyperX LoVo along with every other kit tested today sat well within the margin of error. 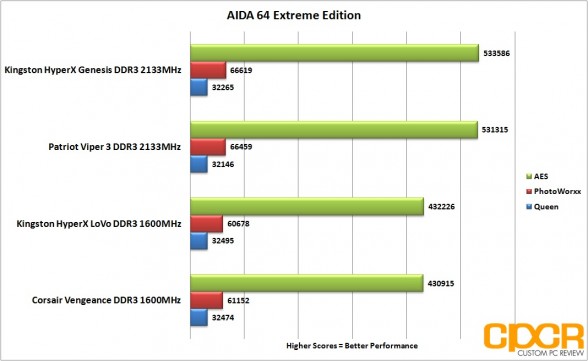 In the AIDA64 benchmark, the HyperX LoVo scored on par with the similarly clocked Corsair Vengeance. When compared to the higher clocked Viper 3 and the HyperX Genesis, the HyperX LoVo does score a fair amount lower especially in the AES encryption benchmark and slightly lower in the PhotoWorxx benchmark as well. 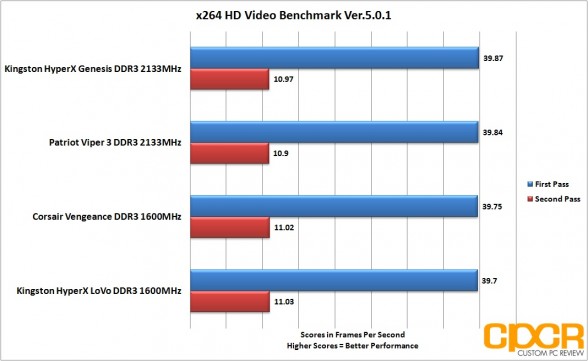 In the HD video encoding benchmark, every kit tested today was able to perform on par with each other. Looking at the patterns though, it seems like the higher clocked memory scores a smidge bit faster on the first pass, but the lower latency memory tends to do a bit better in the second pass. The difference is marginal at best though.

Overclocking the HyperX LoVo was fairly successful, but to be honest I didn’t exactly spend too much time working on getting the highest overclock. That said, I was able to fairly squeeze out a 1866MHz overclock by cranking the voltage up to 1.5v and setting the timings to 10-10-10-30-2T. Of course, to me that kinda defeats the point of purchasing low voltage memory since the reason to buy something like this is to get as low of a voltage as possible. There are plenty of memory kits that are guaranteed to run at 1866MHz or higher at 1.5v. 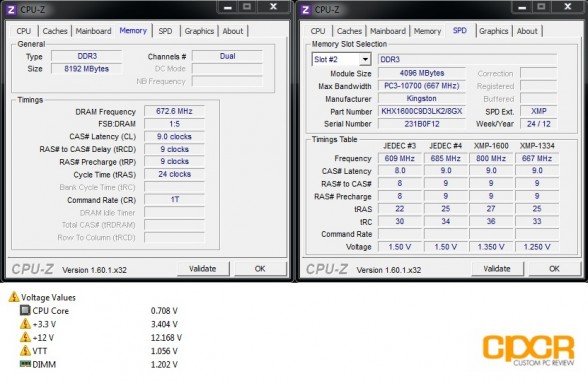 Since the memory is meant for running at low voltages, the next thing I tried then was to undervolt the HyperX LoVo to see just how low it could go. Using XMP Profile 2 as a starting point, I set the memory to 1333MHz at 9-9-9-25-1T at 1.25V, which as usual of Kingston products ran 100% stable. After a bit of fine tuning, the memory then happily ran at 1333MHz 9-9-9-24-1T at 1.2V, which is an additional 0.05V lower than the voltage specified by XMP Profile 2. (Image above)

For power consumption testing, I measured the power draw of the entire system with a Kill a Watt P4460 during both idle and load environments. For load testing, I ran the Prime 95 blend test, which stresses both the CPU and the memory to create maximum power draw on the memory. 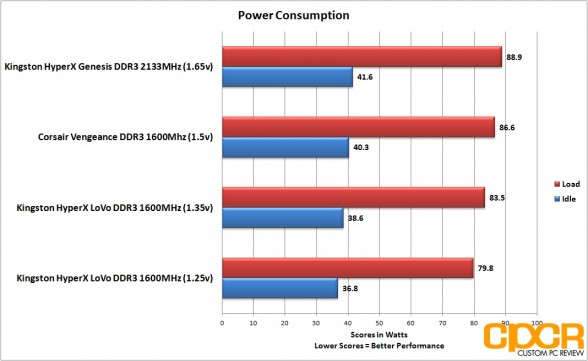 At idle, going from 1.65v memory to 1.25v memory yielded a slightly lower power savings of about 4.8 watts, which is still good especially for those looking for memory for a PC that will run 24/7 such as a home server. While 4.8  watts might not seem like a lot, it does add up after a couple years of 24/7 use.

That said, I’m now quite interested in seeing what kind of battery life improvements can be had with lower voltage memory on notebooks. While 5-10 watts isn’t much at all for a desktop PC, 5-10 watts could potentially result in a significant amount of additional battery life on a notebook. Could very well be something worth considering in the future.

Another test I was particularly interested in was what kind of temperature savings could be had by running memory with lower voltage. Now, this is actually quite difficult to do properly as memory typically doesn’t come with embedded sensors and there are plenty of variables to consider such as heatsink heat dissipation and such, so what I ended up doing is just measuring the outer temperature of the heatsink just for a general idea of temperature.

Since both the Kingston HyperX LoVo and the Kingston HyperX Genesis seem to have identical heatsinks except in different color, I felt like a comparison between these two memory modules would yield the best results in this test. That said, this definitely isn’t ideal by any means, so I wouldn’t take this as definitive regarding temperatures, but it does give us a general idea of what kind of temperature savings can be had. 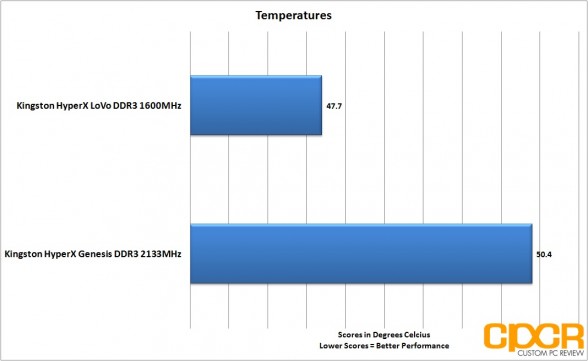 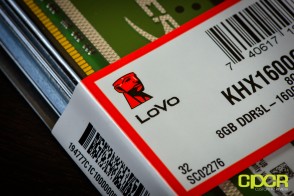 Since the HyperX LoVo is advertised as being more power efficient and cooler running, we’ll talk about that first. Was the advertising accurate? Yes. From my results, those switching from 1.65v high performance Kingston HyperX Genesis memory to 1.35v Kingston HyperX LoVo memory, should see a power savings of around 4.8-9.1 watts. In terms of temperatures, I saw around a 2.7°C difference between the HyperX Genesis’s heatsink and the HyperX LoVo’s heatssink under load, but I was simply measuring the heatsink temperature and not the actual memory module itself so I wouldn’t consider the results definitive by any means.

Performance wise, I’m not really going to get into that too much. Time and time again I test new memory kits, and time and time again I see the similar results in terms of performance. Faster memory just doesn’t produce much of a performance benefit on Sandy Bridge/Ivy Bridge systems simply because Intel has done such a good job with the internal memory controllers that higher frequency memory no longer makes the significant difference it used to on older processors/platforms. These days, unless you’re an overclocker or something, the trick to buying memory is simply to look at price, aesthetics, reputation and value add.

In terms of overclocking then, I found that there was definitely headroom to push the Kingston LoVo and I was easily able to push it up to 1866MHz so that worked out well, but what’s really nice is the fact that the HyperX LoVo is also capable of running at even lower voltages than what’s specified in the XMP profile. After a bit of tinkering, I was able to hit 1333MHz 9-9-9-24-1T at 1.2v, which is really good for those looking for the absolute maximum in terms of power savings and case temperature reduction. 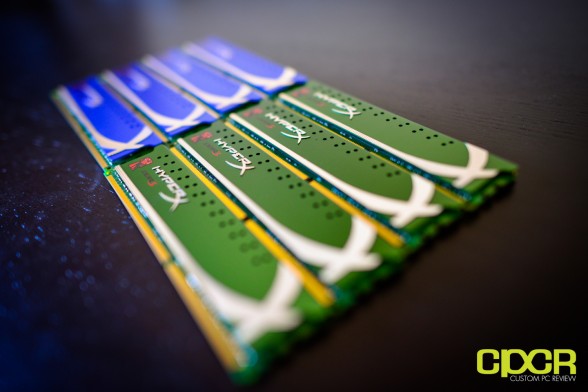 Pricing on the Kingston HyperX LoVo 8GB (2x4GB) DDR3 1600MHz kit  is currently $49.74 on Amazon, which isn’t too bad for lower voltage memory considering most 8GB 1.5v kits run for around $50. Competitors include the Samsung MV-3V4G3D and the G.Skill Sniper F3-12800CL9D-8GBSR1. While the competitors are a couple bucks cheaper, you are getting an awesome looking heatsink to go along with the HyperX LoVo as well as the Kingston name/reputation, so it’ll be up to you if that’s worth the extra.

Was there power savings and a temperature reduction by going with the HyperX LoVo? Yes. Was it significant? No, not really. Then again, you aren’t getting much performance benefit by going with higher voltage, higher clocked memory so it might not be such a bad idea to invest in lower voltage memory anyway especially since it comes in at around the same price as higher voltage memory. At least this way you get to save a couple bucks worth of electricity every year and possibly get a slight reduction in case temperatures as well.

Special thanks to Kingston Technology for making this review possible!